Following statements made early in 2021, Burmester recently announced the debut of two new products in its home audio segment. The company had dedicated itself to developing new products in its core business as part of its ambitions to grow internationally.

The company remains dedicated to its quality promise, sourcing more than 95 percent of its materials locally and relying purely on handmade manufacturing processes in Germany.

Beginning with the new BC150 loudspeakers, Burmester has translated and extended the innovation leaps from its benchmark-setting BC350 loudspeakers and brought into a more compact form.

“The BC150 brings clarity and purity of sound to another level. The time and dedication our engineers spent on its development have really paid off and will be felt from the first second the loudspeakers are played”, says Thorsten Poenig, Chief Sales Officer. 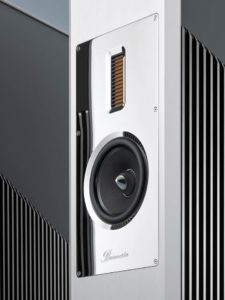 Of course, all that passion and obsessiveness is as nothing if the loudspeaker itself does not perform in the listening room. However, that attention to detail pays off as the BC150 is one of the most detailed, exciting, dynamic and transparent sounding loudspeakers you can hear. There’s also a distinct family sound emerging that follows in these lines, from the B38 up to the vast BC350, they have a lot in common; just that the further up the line you go, the more dynamic range, volume headroom and detail from a cabinet that does an increasingly impressive vanishing act (obviously not physically… it’s a big box). Granted, a loudspeaker like the BC150 needs a lot of quality electronics upstream, but that’s something Burmester already knows well, and having these loudspeakers driven by a pair of 911 mk3 power amps running in bridged mono mode is a perfect way of delivering a truly outstanding performance.

For such an imposing loudspeaker, it’s remarkably fast and musically reactive; transients hit home with speed and precision, making many ‘boxes’ sound like, well, boxes. These loudspeakers are too substantial to be a point source loudspeaker (unless you were playing them in a room about the size of Berlin itself), but the speed of the BC150 suggests otherwise; One of my regular recordings is ‘Memphis Soul Stew’ by King Curtis [King Curtis Live at Fillmore West, ATCO], not just because it’s an unsullied live mix taken almost directly off a desk a few days before King Curtis’ murder, but because each musician in the group is a master in their own art. I mean, every other drummer tries – and usually fails – to deliver a Purdie Shuffle, but when you have Bernard Purdie himself playing that shuffle, it’s like a lesson in the craft. Similarly, getting to hear Cornell Dupree play that funky rhythm guitar sound with licks he invented, and so on… you couldn’t ask for a better lesson. Any speaker that can keep up with these musicians is impressive in the extreme.