Continuing my ‘beat’ covering digital audio and amplification (with an awful lot of loudspeakers, analogue sources, and cables thrown in for good measure), April’s AXPONA event in Chicago is fast becoming one of the main fixtures in the audio world, and is arguably becoming America’s most important audio show in the first half of every year. Given the former significance of CES in January, that’s saying a lot.

The advantage AXPONA holds over the mighty trade event is two-fold; it allows the public to gain access to the latest and greatest audio equipment, and – from a public relations perspective – means new products from audio brands do not get swamped by discussions of wearables, drones, and gadget central. 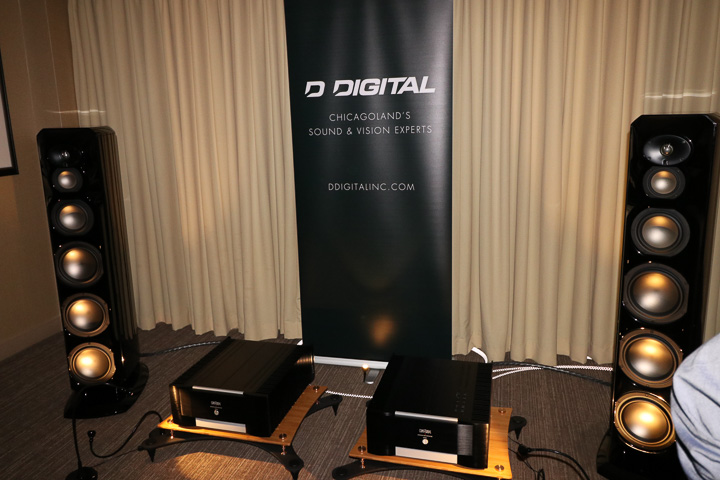 D Digital’s room was another example of how all-digital rig seems so simple next to the extraordinary analogue rooms. A pair of Mark Levinson No 536 mono’s ($30,000 pr) a Mark Levinson No 519 audio player ($20,000 and on my wish list to review) feeding the mighty Revel Ultima2 Salon2 4-way floor standing speakers ($22,000pr) all connected with a collection of WireWorld Platinum Eclipse and Electra speaker, interconnect and power cables. Simple and high performance. The sound was inspiring! 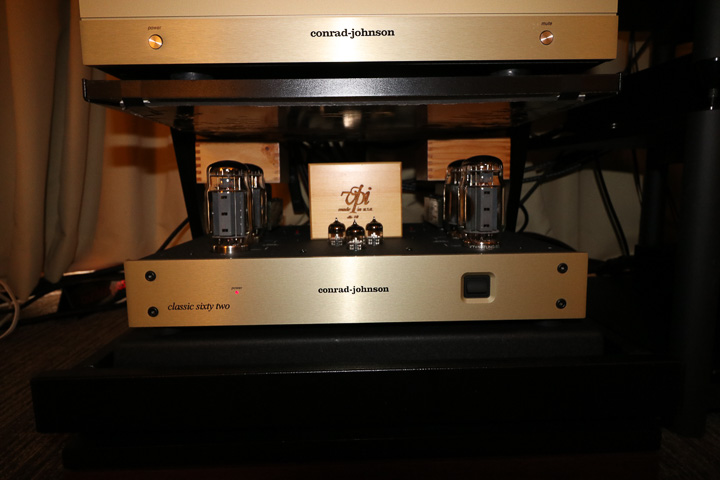 Superior Audio systems was previewing the new Conrad Johnson Classic 62 KT120 amp. Coming in at £4,750 this tube based beauty offers 60 wpc into 8 Ohms. Feeding the amp was the auranas SRV music server (yes, lower case a). This device has enterprise grade music file protection and can play virtually any bit rate or format of music file. Running off an intel i3-4130T 4th generation Haswell chip is a slim 395mm x 225mm x 40mm. The system was powering a pair of Vandersteen Treo’s so I felt right at home! 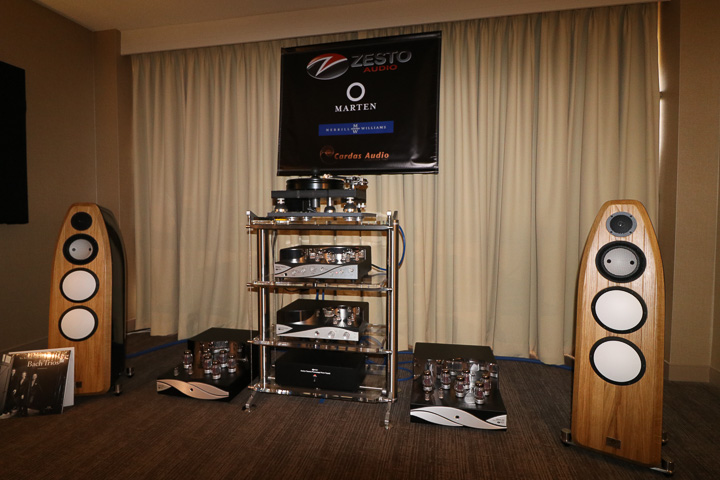 The Cardas room featured an all Zesto Audio system driven by the beguiling Eros 300 Monoblocks Class A power amp ($19,900 Pr) and Leto 1.5 Pre-amp ($7,500). Speakers were the Marten Coltrane Tenor’s ($80,000) The Merrill Williams Audio REAL 101.2 turntable ($7,200) with Benz Micro Gullwing SLR MC Cartridge ($3,600) fed the Zesto Andros Tessera tube phono stage ($12,000). Stillpoints Ultra 6 feet ($899 ea), ESS42-26-5 Rack and Cardas Audio cables completed the system. This was one of my top rooms for sound quality at the show. Clear three-dimensional sound with terrific detail made this room a bit of an audio oasis compared to many of the rooms that presented significant sonic challenges to the gear. An excellent job by all parties in this room. 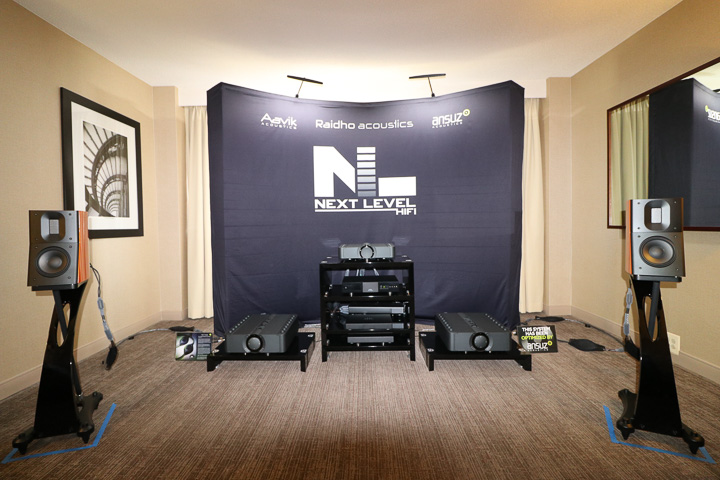 Lars Kristensen of Raidho fame is always one of the friendliest exhibitors. Even on a last day of a show he is in a great mood. Of course, if you get to listen to systems of the quality he does you would likely have a smile all day too. The mighty Aavik C-300 digital pre-amp/DAC ($36,000) fed the Aavik M-300 monoblocks ($48,000 ea) into the Raidho D-1.1 stand mount speakers ($23,000). The system had incredible imaging and instrument placement. The dynamics of these stand mounts was amazing. After a few minutes of the typical audiophile music someone handed him a CD or Rammstein’s Mutter (German heavy metal!) and the system rocked out. 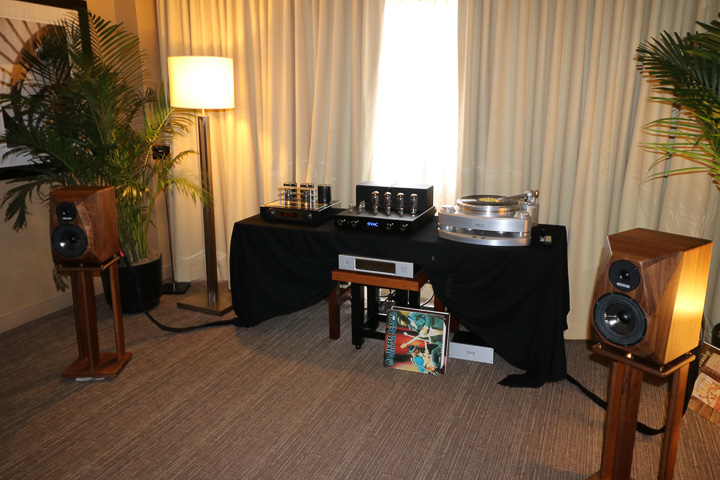 Fidelis Music Systems had a stealthy Digital aspect to their seemingly all analogue room. The Zero-Uno DAC Plus ($9995) is a tube based DAC that could have easily been mistaken for a Phono Pre. Music was sourced from an Aurender N10 server ($8,500 with 8TB) It was feeding files to the VAC Sigma 160i Special Edition 85wpc ($14,000 + $2,200 for MC phono stage). Speakers were the Diapason Adamantes III ($6,599 pr) speaker cables were 3 Meter Tellurium Q Black Diamonds ($4,200 pr) Also featured was the Acoustic Signature Ascona MK2 Turntable ($32,995) and Acoustic Signature 12” TA 9000 Tonearm ($17,995). I was impressed with the Adamantes III’s delivery from the VAC integrated. As a tube fan this was a fun and well-coordinated system. 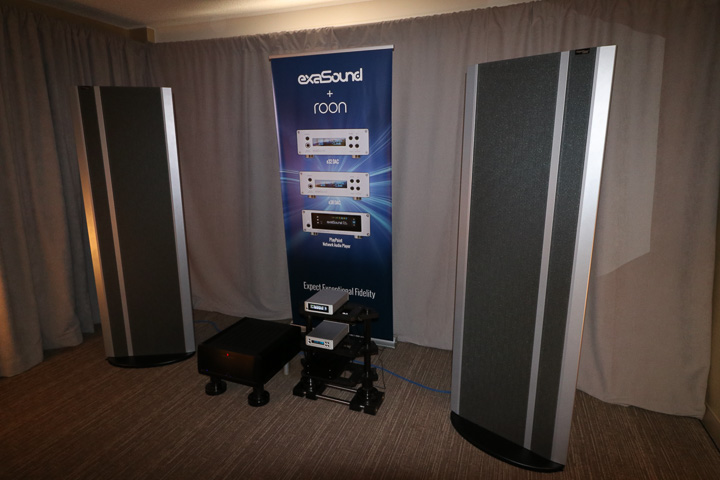 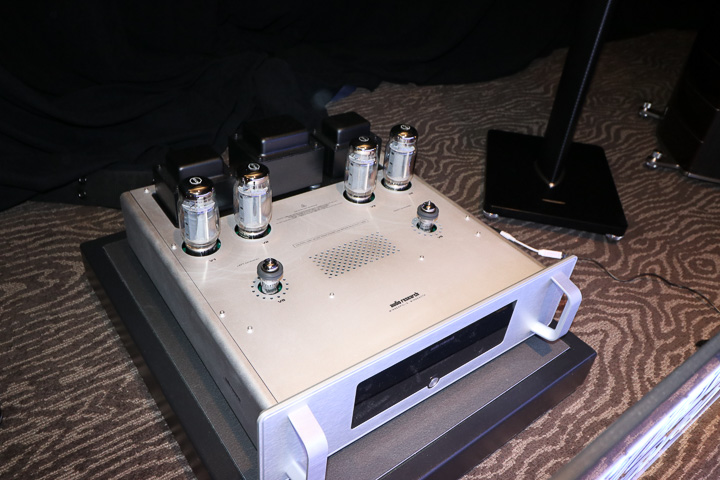 Audio Research was being presented by Quintessence Audio on the 12th floor. The Sonus Faber Il’Cremonese speakers were filling the very large room being powered by the Reference 250 Monoblocks and fronted by the Reference line of DAC’s and Pre-amps. The new toys were the VT80 amplifier producing 75wpc running KT120’s ($7,500), the DAC9 ($7500), the LS28 Linestage ($7500) and the PH9 Phonostage ($7,500) making up the new Foundation series. Aesthetics were sharp and very Audio Research. 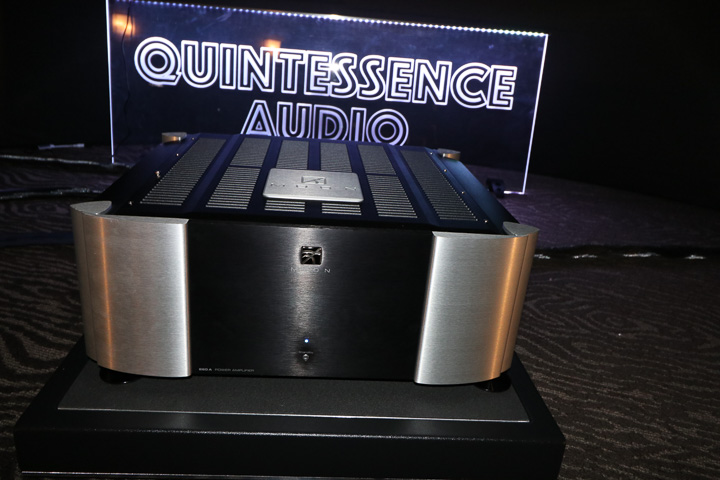 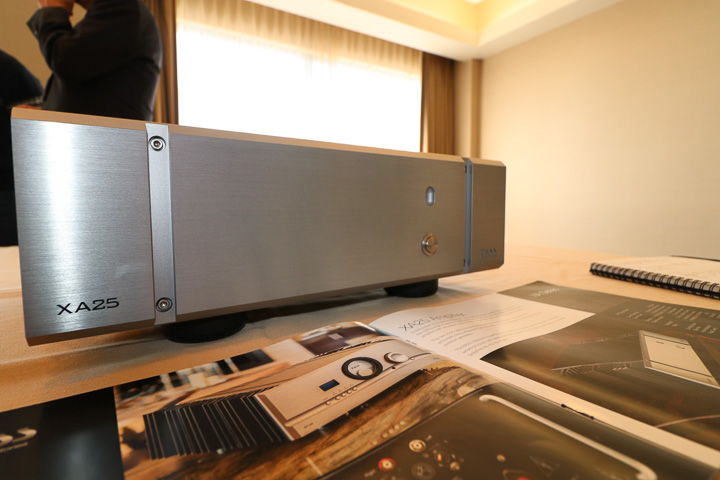 Any time Pass labs has a new amp it is news. Their new XA25 stereo amp puts out 25wpc and comes in at a more affordable price point ($4,900). Pass Labs amps have a history of producing power beyond their rated specs. The goal of the XA25 is to allow people to buy a Pass Labs amp at a more affordable price point. The design goal was to never compromise on the quality Pass is renowned for. The display was static so I hope to listen to it soon. 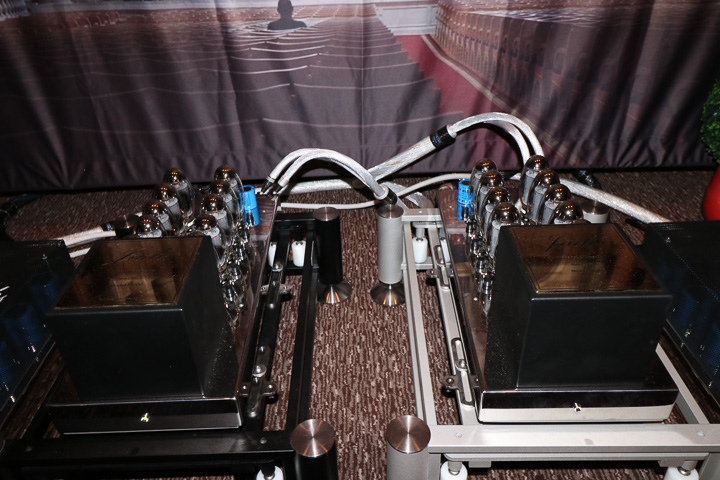 George Vatchnazde the Proprietor of Kyomi Audio always has a fun and terrific sounding room. The big Vivid Audio Giya G1 Series II speakers ($68,000) have a unique shape and a wonderful sound. Driving them were the big Jadis JA200 MK II Tube Mono amps ($33,900 pr) Digital audio was handled by the imposing MBL 1621 CD Transport ($28,000). TechDas Air Force, Graham Elite, Koetsu and Ortofon handled analogue. Cables were all from Stealth and stands from Artesania. This was a high-performance room and another top sounding room for me at Axpona! 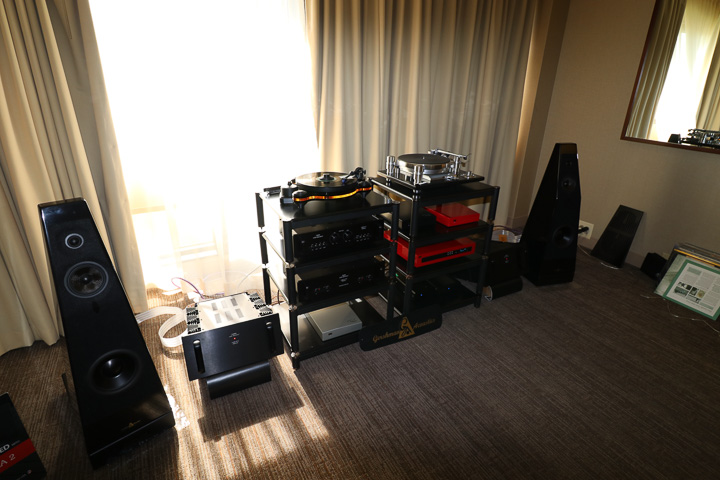 Vladimir Lamm can build amps. That’s what I have heard. His Model M 1.2 Reference Mono’s run 110 watts in Class A! ($27,590 pr) The 1.2’s and the LP 2.1 Pre-amp ($8890) were driving the Gershman Grande Avant Garde G2 speakers ($12,999) Digital was supplied by the Oracle Paris CD 250 player ($3320). Oracle Tables and a Corinth Reference cartridge were also on hand. All cabling was via Nordost Valhalla. This was my second time listening to the Gershman speakers each time driven by Lamm electronics. It is now a regular stop for me. The sound was full and inviting. This straight forward system was another top room for me. 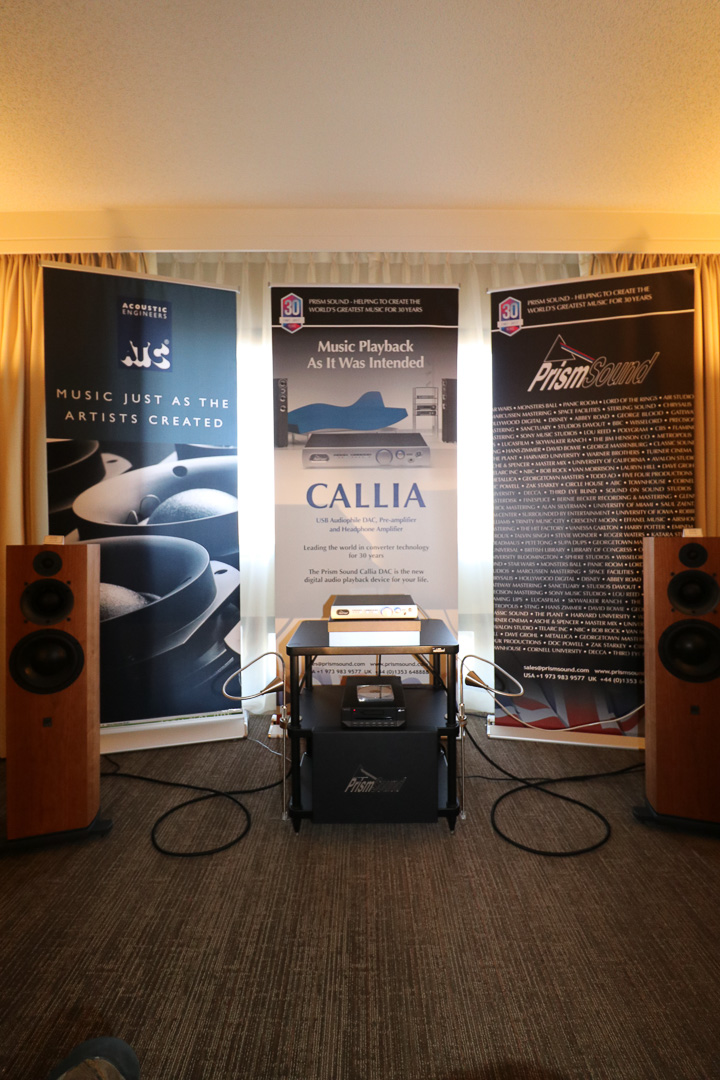 The Callia DAC/Headphone amp from Prism Sound (£1,795) was reviewed by Hi-Fi+ last fall and it was my first time hear it in the US. Paired with an active pair of ATC speakers via its XLR outputs. Given Prism’s 30+ years of Cambridge based pro audio history it was no shock to hear the clear mixing board honesty coming through the ATC’s. Mark Evans explained that the Callia was first shown in July of 2016 in the UK with 2017 CES as its American debut. Given its flexibility as a Pre-Amp/DAC/Headphone amplifier it can be the digital hub everyone could find some room for in our homes. 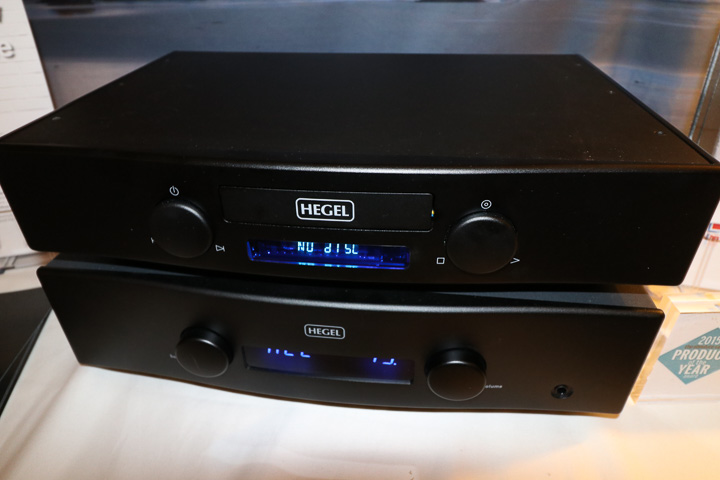 Hegel was showcasing their new Mohican Redbook CD Player ($5,000). Named so because it is likely the last CD player they will ever make. It was paired with their highly regarded H160 integrated 160 wpc ($3,500) and the terrific KEF Blade 2’s ($22,000) Cabling was all by Nordost. Comparing the sound of Tidal via streaming the Mohican had far more body and clarity on the same Ray Charles track. A no contest win for the Mohican. 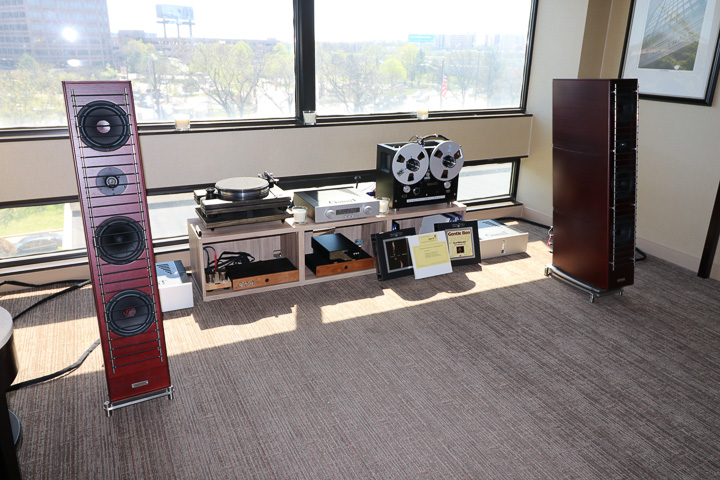 The GamuT Audio room as usual was staffed by GamuT Audio lead designer Benno Baun Meldgaard and US distributer Michael Vamos of Audio Sky’s from LA. There was nothing new in the room but it was the most significant listening experience I enjoyed at the show. Sporting the GamuT RS7i speakers ($39,999) and 250 Monoblocks ($25,500 pr) The D3i Dual Mono Pre-amp ($8,250) Benno hooked up an RS62 Revox Reel to Reel and a new Tape pre-amp card inside the D3i. He put on a tape of Pink Floyd’s The Wall after hours and a group of us sat in candle light for the entire album. The sound was astounding. Having heard the album countless times, it was by far the single best presentation of it I have ever experienced. Opportunities like this are rare and cherished. By virtue of this experience the GamuT room is my top room for this year’s Axpona. Well done GamuT Audio! 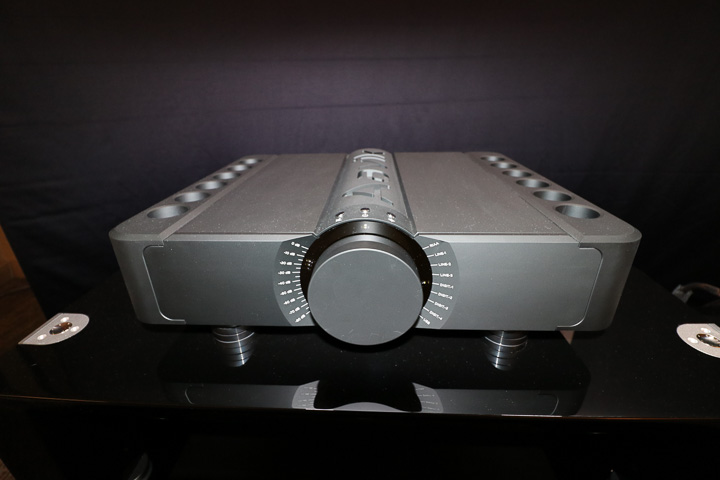 Aavik’s more affordable room swapped out the Monoblock/Pre-amp for the Aavik integrated amp ($30,000) and the Raidho’s for Scansonic MB5 speakers ($6,950). With the room price dropping 80% in cost the sound barely diminished at all! The Aavik Integrated crunched out a clean 300wpc and the MB5’s were happy to receive the power. Soundstage and instrument position were spot on and virtually holographic. I expected excellence from Aavik. I was pleasantly surprised by Scansonic. Trickle down tech from Raidho indeed! 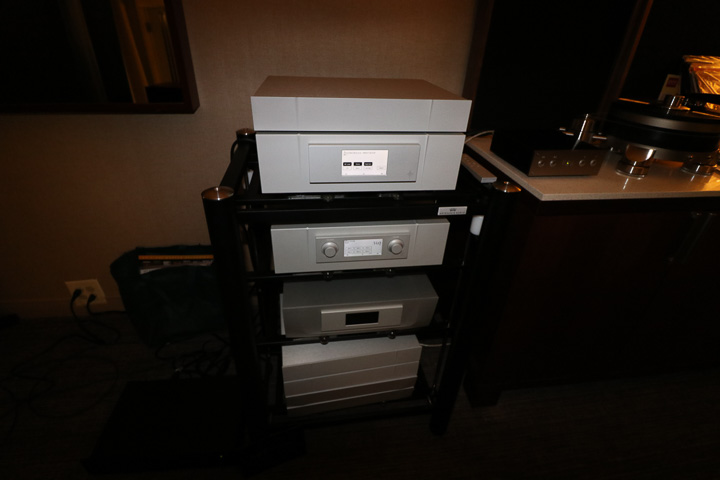 Constellation has filled a gap in their lineup with the new Revelation Series. Starting with the 250 wpc Taurus amp ($19,500 or Mono @ $39,000 pr), the Pictor Pre-amp ($18,000) and the Andromeda Phono Pre ($18,000) the new line was paired up with Martin Logan Renaissance speakers ($25,000) MIT Cables and Continuum Audio Labs Turntable with Viper Tone Arm and an Ortofon A95 cartridge rounded out this auspicious debut. 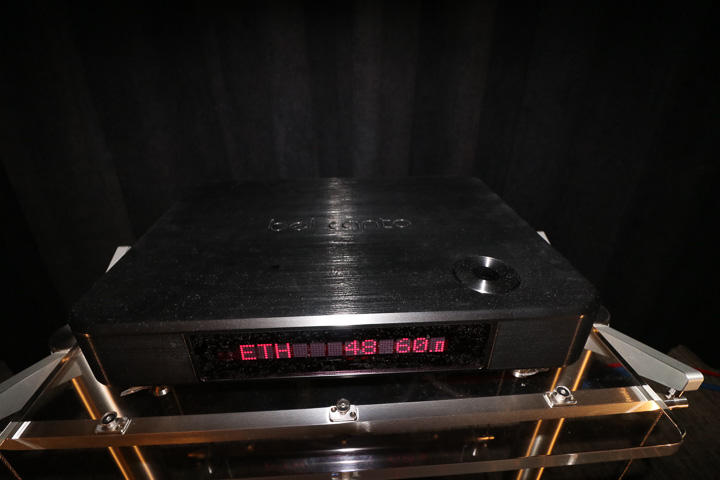 Bel Canto has been working for some time to develop an integrated version of the much-awarded Bel Canto Black system. The new C600 Black Integrated ($25,000) is an Integrated, DAC, Streamer and more. It is a gorgeous Black with Red all in one box bringing 300 wpc into 8 Ohms. Add speakers, in this case the Martin Logan Expression ESL’s ($15,000) and Nordost cables and you are ready to play. The system while simple was a wonder to hear. I am hopeful for a review sample!

A show this large presents a challenge to report on everything. I have touched on many of the personal highlights of this now largest audio show in North America. Hat’s off the Steve Davis and his team for a most successful event and best of luck with the move next year to the new venue, the Renaissance Hotel in Schaumberg, Illinois!