AudioQuest has been making the DragonFly portable DAC since 2012. The DAC’s appearance hasn’t changed much, but it’s been through two iterations, and now there are two new models vying for your readies. Up until now it has not been possible to use a DragonFly with most tablets or mobile phones because the USB controllers in these devices limit the amount of power that they let a device draw  (for example, when iOS 7 came out the Apple devices that ran it restricted power output to 100mA). The previous generation of DragonFly, v1.2, could be used with some Android phones, but it would not have had a positive effect on battery life.

Given that the smartphone sector has the potential to outstrip the computer audio market by a huge margin AudioQuest has understandably been very keen to find a solution to this USB power puzzle. The company made the breakthrough two and a half years ago when Gordon Rankin and Steve Silberman found a semiconductor company called Microchip that makes low-noise micro-controllers for all kinds of applications, including linear measurement. Microchip has a low power range of micro controllers that draw considerably less power from a USB host and allow use with all smartphones on the market. It took this long to get to the new DragonFlys to market because AQ needed to write control code and develop protocols to use the new chips. 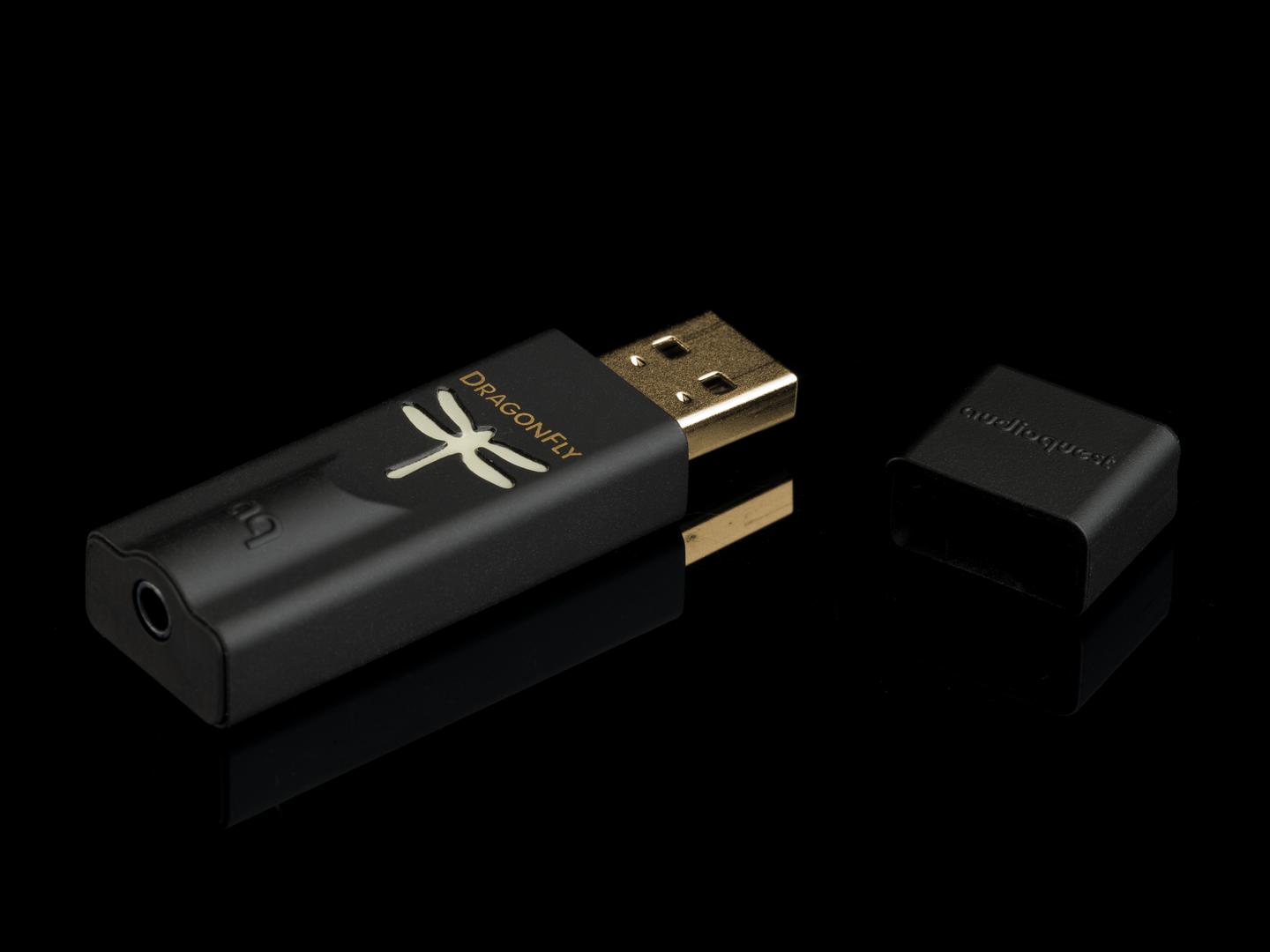 The new DragonFly Black (v1.5) uses Streamlength software and a 32-bit ESS 9010 DAC developed fro mobile applications and that runs PCM and DSD, but AudioQuest’s choice of micro controller limits sample rate to 96kHz. None of AudioQuest’s portable DACs cover higher sample rates or DSD because of the radiated noise created by the current crop of high-speed USB micro controllers. In the confined space of a portable DAC like a DragonFly, which is only 63.5mm long, this noise undermines the sound quality so significantly that it renders higher sample rates pointless.

The new DragonFly Black is £40 cheaper than the previous version at £89 – an achievement AudioQuest puts down to higher production runs and because the new DAC uses the clock in the converter chip itself instead of having a separate crystal clock.

The £179 DragonFly Red uses the same receiver chip as the Black, but has an ESS 9016 DAC, a strong contender in the best mobile chip that company makes. It has an excellent signal-to-noise ratio, multiple power supply taps, and an ESS headphone amplifier with a 2.1-volt output that can drive more demanding phones. The other significant factor is a 64-bit digital volume control rather than the analogue one in the Black. Both DragonFlys are upgradeable via firmware so that they can adapt to future requirements: MQA was mentioned as being on the cards, if the format proves to have legs.

Both DACs can be used with iOS devices if you buy Apple’s ‘camera kit’ that converts any USB input to Apple’s Lightning connector. For Android users, AudioQuest makes a dedicated OTG (on the go) connector for phones with a micro USB connection called the ‘DragonTail for Android’. Being an open source system, not all Android phones are compatible with USB DACs because the phone manufacturer needs to enable USB audio support. However, I’m reliably informed that most Android smartphines and tablets designed for use with Lollipop (or later) OS are fine. You can check out compatiblity using an app called USB Host Check that’s linked from the DragonFly FAQ page.

It’s naturally a lot easier to use either DragonFly with a computer and a good piece of audio replay software, as you just need to remember that the PC’s volume control acts as a proxy for the volume in the DAC. So, if you are using iTunes, for instance, then push the iTunes volume to max and use the PC’s volume buttons. With my preferred player, Audirvana Plus, you use the volume knob on its graphic, unless you are integrating Audirvana with iTunes of course. In a domestic situation where you are connecting the DragonFly’s 3.5mm jack to an amplifier or preamp, set the volume to maximum in the software/computer and use your amp’s controller. AQ says that volume should automatically be maxed by the DAC in this situation too, but that seems to be software dependent.

As I have a v1.2 DragonFly, I contrasted it with the new Black v1.5 and was surprised to find that the original has a higher output (I had not looked at the spec at that point), but once that was accounted for, it became obvious that the new Black is superior. It reveals more ‘air’ – that is, the acoustic of the recording venue, which is essentially its reverberant character–and has better timing thanks to stronger leading-edge definition. The slightly soft nature of the earlier DAC made it more accommodating for lesser quality sources, but also denied the fine detail that is the purpose of adding a DAC to a device like a computer (that already has one). This result was achieved with a Macbook Air, which is not the greatest of computer audio sources, but the DragonFly proved that it can produce decent immediacy and impressive low-level resolution with a good recording such as John Eliot Gardiner’s Beethoven The Symphonies [Orchestre Revolutionnair et Romantique, Archiv], which made for a performance with lovely restraint. This gives the music something akin to torque, a sense that there is an immense amount of power being held in reserve.

‘Ful Stop’ from Radiohead’s rather more contemporary A Moon Shaped Pool [XL] is a little edgy but powerful and has plenty of drive and even if the bass is not quite as well articulated as it can be, it’s pretty close. Leading edges are well-defined on ‘Don’t Let Your Right Hand Know’ by Sonny Boy Williamson [Keep It To Ourselves, Analogue Productions], where the finger clicks are precise and clear while remaining as natural as the horny fingers of an old bluesman can sound! This is a great recording with lots of background sounds and decent reverb, and the Black does a pretty decent job with it. With a considerably more refined blues recording, like ‘Too Many Misses’ by Doug MacLeod [Exactly Like This, Reference Recordings], the bass drum has plenty of body, dynamics are good, and the voice projects well. This track does have more depth than the Black reveals, and that becomes apparent when switching to the DragonFly Red, which adds tension, drive, and vitality to the mix. It has a notably higher output than the Black (useful for driving more difficult headphones), but even when you compensate for this there is a lot more detail and air in the soundstage. It also sounds better when attenuating the two outputs with the onboard volume control. The Black loses dynamics and leading-edge definition, and while the Red performs in a similar manner, it does so to a lesser degree. There is still a benefit to keeping the DAC’s volume at maximum if you can, however; subtlety and depth of image both increase quite markedly with it set this way.

With the volume all the way up, the aforementioned Radiohead track sounded massively expansive and the guitar was really well rendered. Bass power is still not up with powered DACs, but it extends well enough.

I compared the Red DragonFly with a battery powered portable DAC at over twice the price and was pleasantly surprised with the results. The AQ is a little bass light but ‘times’ extremely well. It took a length of Vertere D-Fi interconnect and Van Morrison’s ‘The Way Young Lovers Do’ [Astral Weeks, Warner Bros] to prove as much, but it handled this tricky track with its dense horns, strings, double bass, and all round genius with aplomb. In fact, I got quite carried away, which is not something that happens too often to me when playing music through a laptop source.

Both the new DragonFlys have a lot to offer for the money. The Black brings quality D/A conversion to portable devices in a well thought out and easy to use package, while the Red ups the sonic ante to the point where it gives pricier competition something to worry about. The Red is a rather good DAC qua DAC, and anyone that uses a computer as a source will find a lot to like in its remarkably coherent and transparent presentation. The 96kHz limit is a restriction if you have a penchant for higher sample rates, but its downsampled sound is more than respectable. Those looking for better sound on the move will be the real winners here, though; all they have to do is find headphones that are up to the job.

DAC Resolution/Supported Digital Formats: All PCM up to 96KS/s with word lengths up to 24-bit