Some things just work and one of them is the 25-30Watt, push-pull Class A tube amp, based around single pairs of EL34 output tubes. It’s a topology that’s been around since the year dot – well, since serious stereo systems first emerged – and while I’ve yet to discover an example that disappoints, a few have delivered truly spectacular results. My very first really serious, high-end amps were a pair of Jadis JA30s (still going strong); perhaps the archetypical example of the breed. Audiomat’s Aria is neither as ambitious as its French compatriots, nor as expensive, but for many of us, the upside of that is that it is both more affordable and in addition, rather more versatile. For starters, as an integrated amp it doesn’t require an expensive line-stage to go with it and secondly, being some three-decades younger than the JA30s it also carries a few modern niceties, like a remote control.

Housed in a simple, closed-box, bent metal chassis, the Aria nonetheless manages to be both stylish and individual, the large silver volume and source select knobs offering a pleasing contrast to the black casework, the acrylic front-panel offering a darkened window that offers a glimpse of the glow beyond. It’s a welcome contrast to some of the gaudier models typically emanating from the Far East. Look inside – something you’ll need to do in order to install the output tubes – and you discover a neatly laid out interior, with the substantial power supply and output transformers arranged behind the single PCB carrying the audio circuit. Inputs and AC connection are kept separate, located on opposite sides of the rear panel, the sort of simple but effective housekeeping that is the hallmark of this carefully considered design. Other less than obvious examples (unless you actually read the manual!) are the fact that Input One is wired with higher quality cable, intended to be used for your primary source. The IEC input is marked for AC polarity and yes you should pay attention to it. There are three conical feet on the underside of the chassis and Audiomat strongly recommend that you avoid placing the amp on metal or glass supporting surfaces: like I said, all good, sensible stuff. One other thing to bear in mind is that the 30Watt rated output is justified (over the more usual 25Watts Class A from a pair of EL34s) by the use of EL34L tubes, running at a higher grid voltage – so don’t be tempted to start a bit of impromptu tube-rolling using standard EL34s – it will be a short-lived and costly exercise. 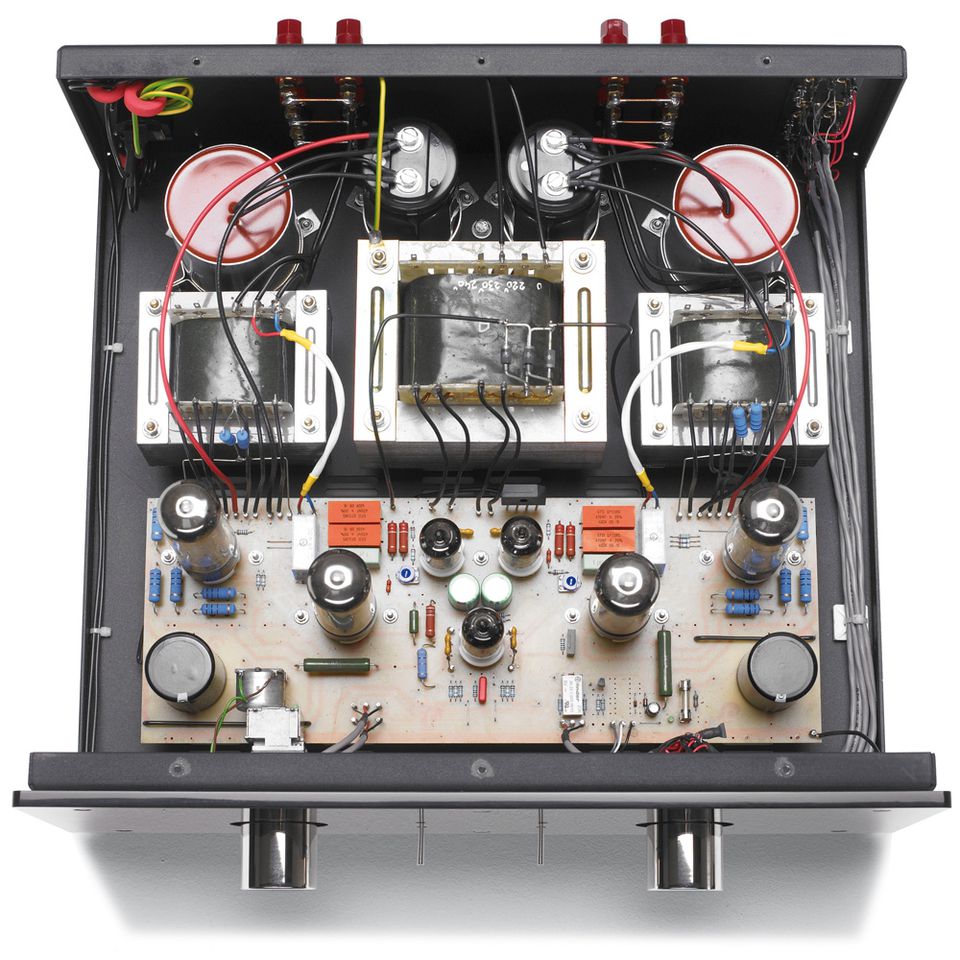 The big issue with the 25 or 30Watt Class A amplifier used to be choosing a matching speaker, but over the years, generally increasing efficiency and easier speaker loads, partly driven by the home cinema market, means that isn’t the challenge it once was. With the 91dB/8 Ohm Focal Sopra No. 2 in-house, I needed to look no further than that. Indeed, if I had an issue with the match it is that I could have done with more travel on the volume control so that it was working further up its range. That aside, this was definitely a happy marriage, while the various Living Voice Auditorium models or the Audioplan designs also distributed by Ikon Audio Consultants, would be other excellent options. Audiomat warns of extended burn-in times for both the amplifier and the tubes – and it’s not wrong. I ran the amp constantly for over a week before it settled down to a sweetly consistent performance. Nor is that a linear progression, with one period around the 50-hour mark where it started to sound distinctly glassy and hard. Thankfully that soon passed and the sound opened out, the stage gained air and the tonality grew richer, warmer and more natural. In fact, if this amp has a single over-riding quality it is the natural warmth and immediacy of its presentation – with the emphasis on “natural”. The Aria is never overly warm, rounded, or mellifluous, but it is harmonically correct, devoid of glare and hardness, and possessing of a remarkable sweetness that nevertheless manages to avoid blunting its musically incisive sense of bite and flow. Play Sol Gabetta’s three-disc set, Il Progetto Vivaldi (Sony 888750 35952) and the Aria not only effortlessly picks the different bands on Discs 1 and 2, it perfectly captures the two different acoustics too, along with Gabetta’s muscular grasp of structure and the tonal and textural differences between the two distinct instruments she uses on Disc 3. This is the sort of incidental detail that adds so much to the vitality in the playing and the recording and which helps make a system listenable and keep it that way.

One thing I particularly like about the Aria is its remote control, objects that (as regular readers will know) I usually despise and rarely if ever use. The Audiomat handset is nicely proportioned, milled from solid aluminium with a sensibly textured finish and despite the material, not too heavy. More importantly it limits its functionality to volume and mute – but best of all, it offers two sets of latched volume controls, one for the “normal” range of adjustment and a second for “précis” or finer increments. Given the Aria’s input sensitivity that was a boon. Get the level just right and the music has presence, body and texture, an unimpeded sense of forward momentum and uninhibited dynamic range.

What that input sensitivity does allow is the use of the Aria with lower efficiency speakers. With that in mind I reached straight for Spendor’s brilliant, miniature D1, its 85dB sensitivity offset by its easy load and limited low-frequency extension. Despite my expectations, I wasn’t quite ready for just how remarkably successful this combination was. The amplifier’s easy, engaging, expressive quality and sense of musical momentum dovetailed perfectly with the Spendors’ fluid rhythmic qualities and natural sense of colour, acoustic, and presence. Voices were life-size, full of nuance and body, while drums had a satisfying solidity that utterly belied the size of the speakers and the paltry paper power of the amp. Driving the Spendors, the Aria took on an extra feeling of purpose and forward motion, although whether the explanation for that is as simple as running the volume control further up its range it’s impossible to say. Whatever the reason, the results are exceptional, both sonically and musically, suggesting that as comfortable as the Audiomat amp is with today’s compact floor-standers, many will consider its natural home to be in smaller systems or at least with smaller speakers, where it adds an impressive sense of weight, presence, and scale to proceedings. 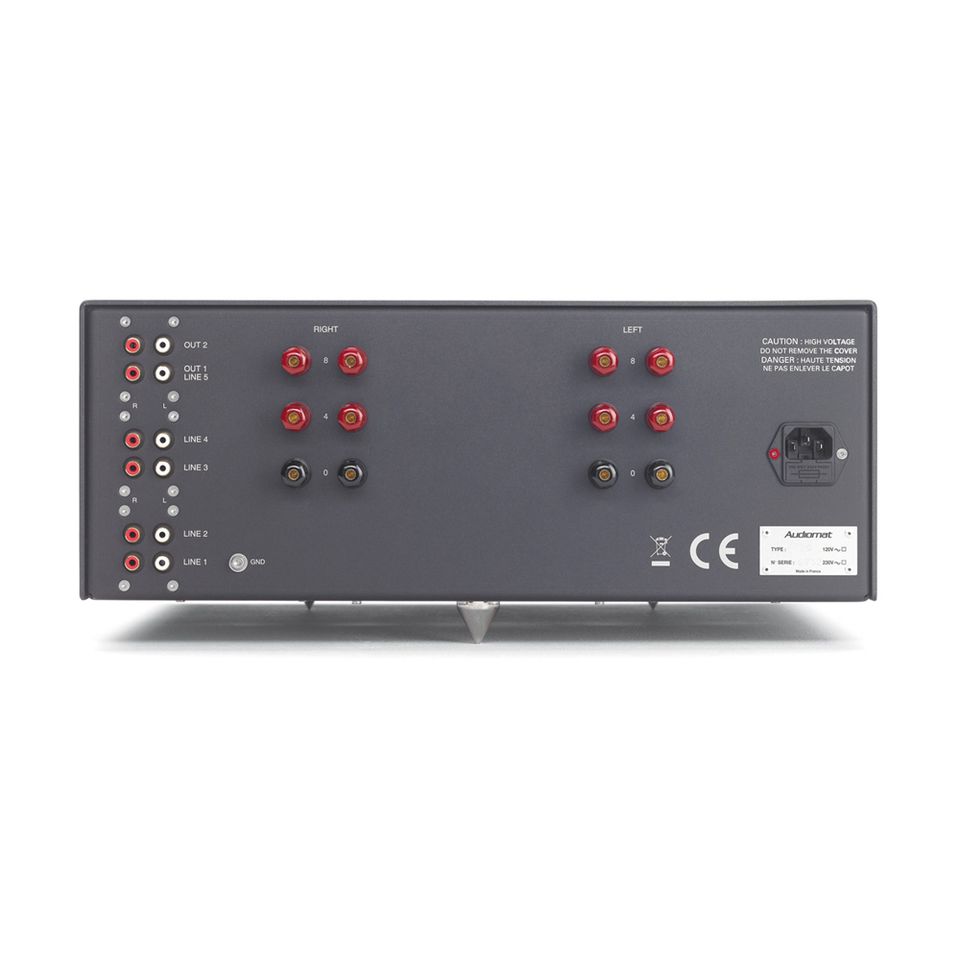 The flood of imported tube amps heading Westward from points East places the Audiomat Aria in a difficult position. On paper it looks expensive compared to the competition, especially when you take the power output into consideration. But look a little closer at the thoughtful execution and care and attention to detail, the distinctly French appearance and the neat internal layout: Then listen to just how subtle and unforced, musically engaging, and expressive this amplifier is and you’ll quickly appreciate just why it’s worth the extra investment. Far from looking expensive, it suddenly looks just like the sonic and musical bargain that it is. From its understated exterior to its natural, unexaggerated, and unimpeded musical coherence, the Audiomat Aria is a keeper, a long-term solution in a world full of short-term fixes and buyer’s remorse. Paired with an appropriate speaker (and that field is pretty wide) it has the ability to simply get out of the way, to let the performers and the performance speak for itself, a quality that promises years of musical satisfaction. There are sound reasons why 30Watt Class A tube amps have always delivered the musical goods. The Audiomat Aria is both a timely reminder of that fact and another excellent and – perhaps most importantly – remarkably cost effective example of the breed.

Outputs: Pre-out and tape out, 4 Ohm and 8 Ohm speaker taps