The Arcaydis brand has actually been around for more than twenty years; I reviewed a couple of examples nearly that long ago. However, having run his business as a direct sale operation for several successful years, founder Richard Allen suffered personal and health issues. He failed to meet delivery targets and consequently the support from the hitherto very positive internet forums turned against the brand, so somewhat reluctantly he closed things down in 2013.

Happily, that didn’t turn out to be the end of Arcaydis – or indeed Richard Allen – as the brand was re-launched in 2016 by two brothers, born in Britain of Hungarian extraction, called James and Robin Szemeti, with Allen’s assistance. After fifteen years in the BBC, followed by some years running a software operation, Robin currently holds the post of Technical Director, while James also has much technical knowhow, but is also very much the hi-fi nut. 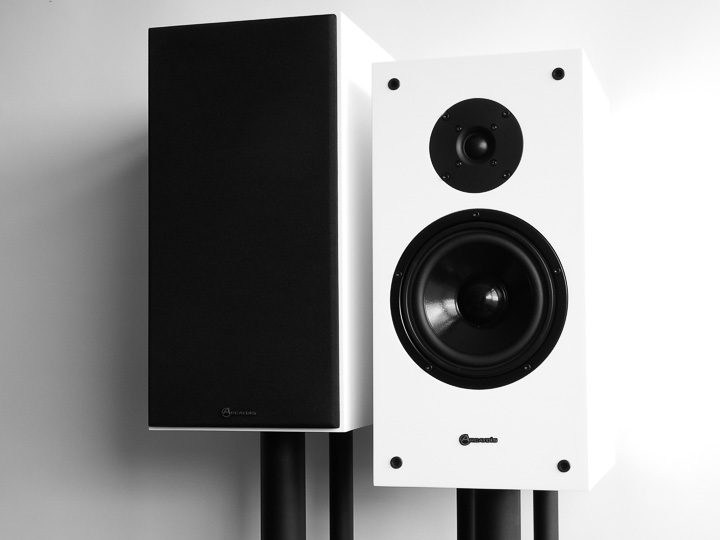 Now based in Sheffield (not coincidentally, the home of excellent loudspeaker cabinetmaker Timberworks) rather than Kidderminster, Arcaydis once again uses a ‘direct sale’ strategy to keep prices low, alongside a 30-day returns policy (see website at www.arcaydis.com). It seems that there are currently two loudspeakers, an EB1S and EB2S, plus an inexpensive (valve) preamplifier and a Class D power amp under the Aeron brand that the company imports from Italy.

The EB2S is the subject of this review. It has a sealed-box enclosure, which is quite unusual these days, and accounts for the bulk of a speaker that occupies roughly half the volume of a typical floorstander. The sealed box construction should ensure fine bass extension alongside a ‘dry’ overall balance that should avoid ‘port boom’.

It also features something called ‘Arcolam’ in its cabinetwork, which is not explained on the website, but apparently minimises cabinet coloration through the lamination of layers of different woods. I had a quick look (via removal of the terminal block), and found a worthwhile combination of birch ply and MDF, making an overall sandwich construction.

Stands of 40cm are recommended and were simply not available, though I did find some 45cm examples. These seem appropriate enough, given my 6ft+ stature and a highish chair. When in position I could certainly see the top surfaces of the enclosures, so I was actually above the tweeter axis. The stands themselves were coupled to the speakers using Blu-Tack, and were then placed (as usual) onto Townshend decoupling platforms.

The two-way driver complement consists of a 170mm bass/mid unit, with a flared, doped 120mm cone and a fixed and rigid dust dome, crossing over to a 25mm soft-dome tweeter. Twin terminals allow each driver to be addressed individually if so desired, though the review pair came with brass strips that connected the terminals together, with access only to the bass/mid terminal pair.

The in-room far-field averaged measurements are very impressive indeed. Much of the band holds comfortably within ±3dB (or even tighter!) limits, so superior neutrality is guaranteed. The bass extension is pretty good too, registering -2dB at 30Hz and -9dB at 20Hz under our far-field measure, alongside a relatively even, albeit slightly dry balance.

A very slight trend in the overall output maximises output above 600Hz while minimising output below that point, which possibly helps project vocals slightly. Although this is a very slight characteristic, it did tend to over-emphasise Bob Dylan’s harmonica on John Wesley Harding [Columbia]: a fact that might well have something to do with the recording!

The sensitivity is a quite low 84dB/W on our measurements, which is a whole lot shy of the 87dB claimed. However, it does look like a very easy load to drive (over and above the essential simplicity of sealed box loading), remaining above eight ohms throughout. For the record, the main driver/box resonance occurs here at 64Hz. 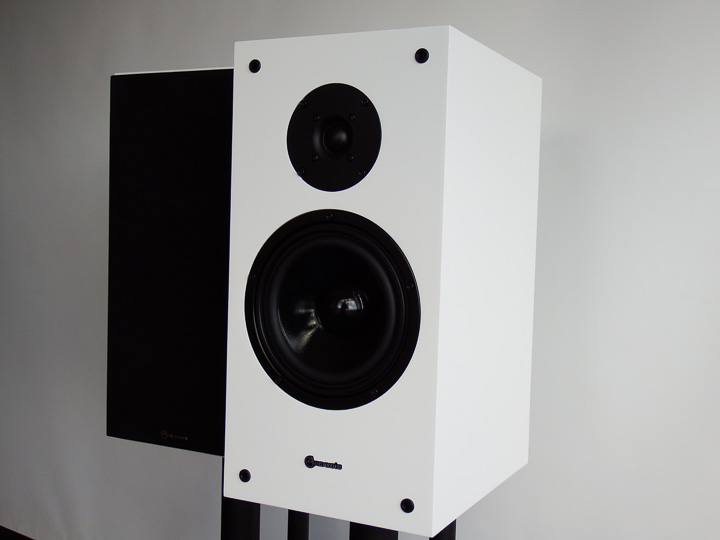 Speech, from radio or TV, was particularly clear and open, but listening to music programming at higher volume levels, did have a degree of ‘forwardness’ that could become a tad wearing, depending upon the mix (see later). I suspect all speaker designers are faced with the dilemma of whether to achieve the best balance at low or at high volume levels. Arcaydis’ decision to opt for the former makes good sense for this listener, who has found his taste for high volume levels declining with the passing years.

This isn’t all that big a deal, frankly, but it does suggest that the EB2S may be better suited to those who prefer to listen to their music at modest levels. I’ve previously mentioned Dylan’s harmonica sounding a tad aggressive on ‘John Wesley Harding’, but that isn’t my favourite Dylan track (an honour that goes instead to ‘Visions of Johanna’ from Blonde on Blonde [Columbia], which has a delightful guitar riffing away instead of a harmonica.) Once again it seemed to work fine when played at a fairly quiet level, though this time any aggressiveness was only audible after changing the cartridge (!)

Back with the Rega Aphelion cartridge, there was no hint of aggression when playing Joni Mitchell’s excellent Hejira[Asylum] – possibly my favourite of all her albums (as long as Travelogue remains a CD-only release) – so it would seem that much of the difference comes down to the individual mix.

During the listening tests I changed the cartridge, substituting an Audio-Technica AT-ART 1000 for the Rega Aphelion in my Rega Naiad turntable/arm combination. And although the result was satisfactory enough, the sound did have a little extra brightness over the Aphelion, and therefore tended to push things a little too far in that direction.

This was particularly noticeable when spinning my copy of The Incredible String Band’s The 5000 Spirits or the Layers of the Onion, a high quality Joe Boyd production for Elektra that normally works very well, but which did sound a bit ‘fierce’ in this particular combination. That, in turn, made me very conscious of the vital importance of compatibility between source and speakers, and the importance of checking this in an individual system context. This fact alone would seem ample justification for Arcaydis’ 30-day ‘money back guarantee’, which does at least provide this option.

However, the Mobile Fidelity version of the Garcia/Grisman double album Shady Grove didn’t sound at all aggressive when it was played with either cartridge, despite featuring a banjo more or less throughout. This only serves to reinforce my opinion that the net balance on any particular disc is usually down to its final mix. 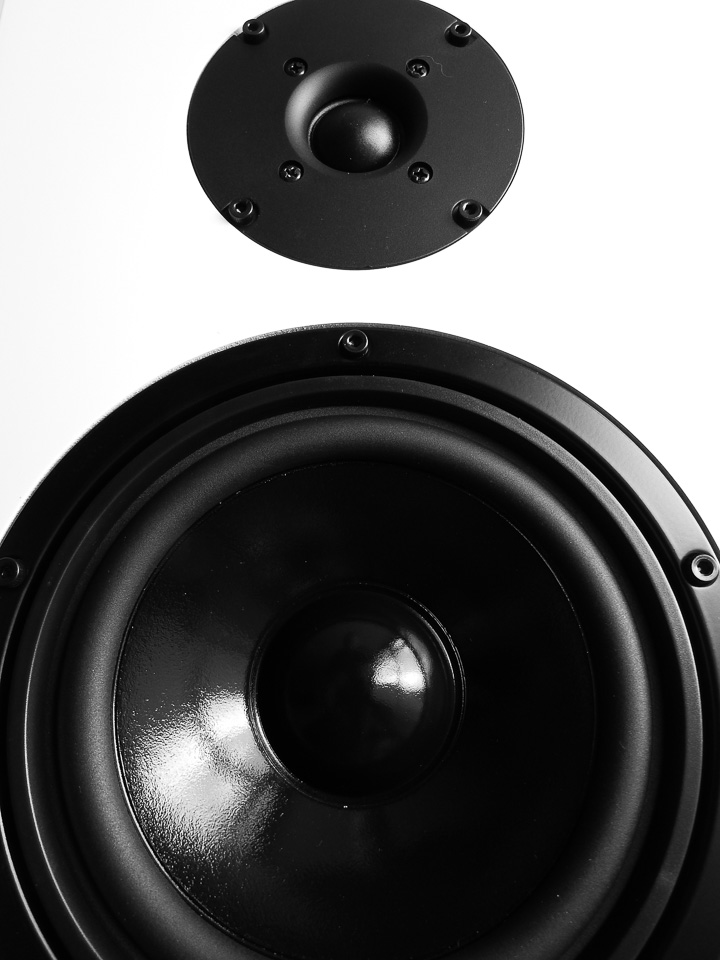 Box coloration is certainly very low, indicating that the Arcolam cabinetwork is doing its thing with great efficacy. The two drivers are also very well integrated by the crossover network, with an effectively seamless transition between them.

I don’t consider myself particularly old (though I daresay others might disagree, since I’ve collected my OAP for the last five years), but it does seem unnecessary to have loads of power available, when the first watt is really the one that matters most. We might disagree with the manufacturer’s claim for a sensitivity of 87dB, preferring a significantly lower figure of 84dB, but low sensitivity is no real problem with today’s amplification.

That said, a genuinely high sensitivity speaker (of, say, more than 95dB) does seem to have some benefits in terms of dynamic expression, but also usually involves bulky horn-loaded loudspeakers that are domestically unacceptable, especially in stereo. Assuming that such inevitably bulky loudspeakers are deemed unacceptable, there can be little reason to look beyond ‘normal’ loudspeakers, such as these Arcaydis EB2Ss.

This might look like a rather ordinary and unexceptional loudspeaker, but don’t let its somewhat mundane appearance put you off, as its performance is actually superb. Provided that it works well in tonal balance terms when driven by a potential user’s system (which is where the 30-day guarantee comes in), this Arcaydis EB2S is a totally exceptional speaker. It has a dry and slightly forward balance that favours low level listening, and won’t necessarily suit every system, but it is unusually neutral and therefore offers fine value for money.