Not long ago Hi-Fi+ favourably reviewed two significant earphones from the Chinese firm 1MORE: the Triple-Driver and Capsule-Type Dual-Driver earphones. The common denominator between these two different designs involves the fact both are keenly priced and offer technologies and performance far exceeding the norms for their price class. Frankly, 1MORE would have it no other way, since the company’s acknowledged mission is to build technically advanced and sonically accomplished personal audio products that sell at what one company spokesman has described as “disruptive prices”. This is welcome news for those of us seeking audio components that can give us the most value possible per hard-earned dollar or pound.

Gary Hsieh, the founder of 1MORE, is largely responsible for his company’s value-minded approach to the marketplace. In a recent interview with Hi-Fi+ (found in the Hi-Fi+ Guide to Personal Audio, available as a free download through this link: https://hifiplus.com/buyers_guides/5/), Hsieh famously said, “1MORE doesn’t want to simply climb that [price/performance] mountain; we want to turn it upside down so that everyone can reach the peak.”

Accordingly, Hsieh advocates an intensive consumer research/data gathering programme called “IQ100”, where the objective is to learn what consumers regard both as the must-have benefits to include and the ‘pain points’ to avoid in any given class of product. What emerges is a specific product development road map, which Hsieh describes in this way:

Thus far, Hsieh’s IQ100 approach has served 1MORE well, leading to products that have won the company large numbers of new devotees.  Still, the aspirational performance seekers amongst us are perhaps bound to ask, “Well, what would happen if 1MORE decided to set its price/performance sights a bit higher?” The answer to that question comes to us in the form of 1MORE’s new Quad-Driver in-ear headphones (£199.99, or $199 in the US), which are by far the firm’s most ambitious in-ear models to date.

At first glance, casual observers might take the Quad-Drivers to be pretty similar in

design to the original Triple-Driver models, but closer inspection reveals significant differences. Those differences start with the driver array, where the Quad-Driver sports a new dynamic mid-bass driver equipped with a PET diaphragm overlaid with a Diamond-like Carbon Film layer—a driver said to increase accuracy while reducing distortion. Completing the array is a set of three patented balanced armature-type drivers, where two of the drivers handle high frequencies while the third acts as ‘super-tweeter’ handling ultra-high frequencies.

Another change is that the aluminium earpiece enclosures (or ‘sound chambers’ in 1MORE parlance) of the Quad-Drivers are larger in volume and differently shaped than those of Triple-Drivers. In fact, the new enclosures, which are anodised in a medium grey colour with red accents, look very much like miniaturised nacelles from modern-day Rolls-Royce jet aircraft engines.  As in earlier 1MORE earphone designs, the sound outlet tubes of the Quad-Driver earpieces are placed at a 45-degree offset angle relative to the centreline of the enclosures—an arrangement that makes the earphones easier to insert, more comfortable for long-term wear, and less prone to being dislodged. Other welcome touches include the sturdy, tubular aluminium signal-cable strain reliefs exiting the aft ends of the earpieces. Not only do these strain reliefs save wear and tear on the cables, but they also give listeners safe surfaces to grasp when adjusting the earphones’ positions. 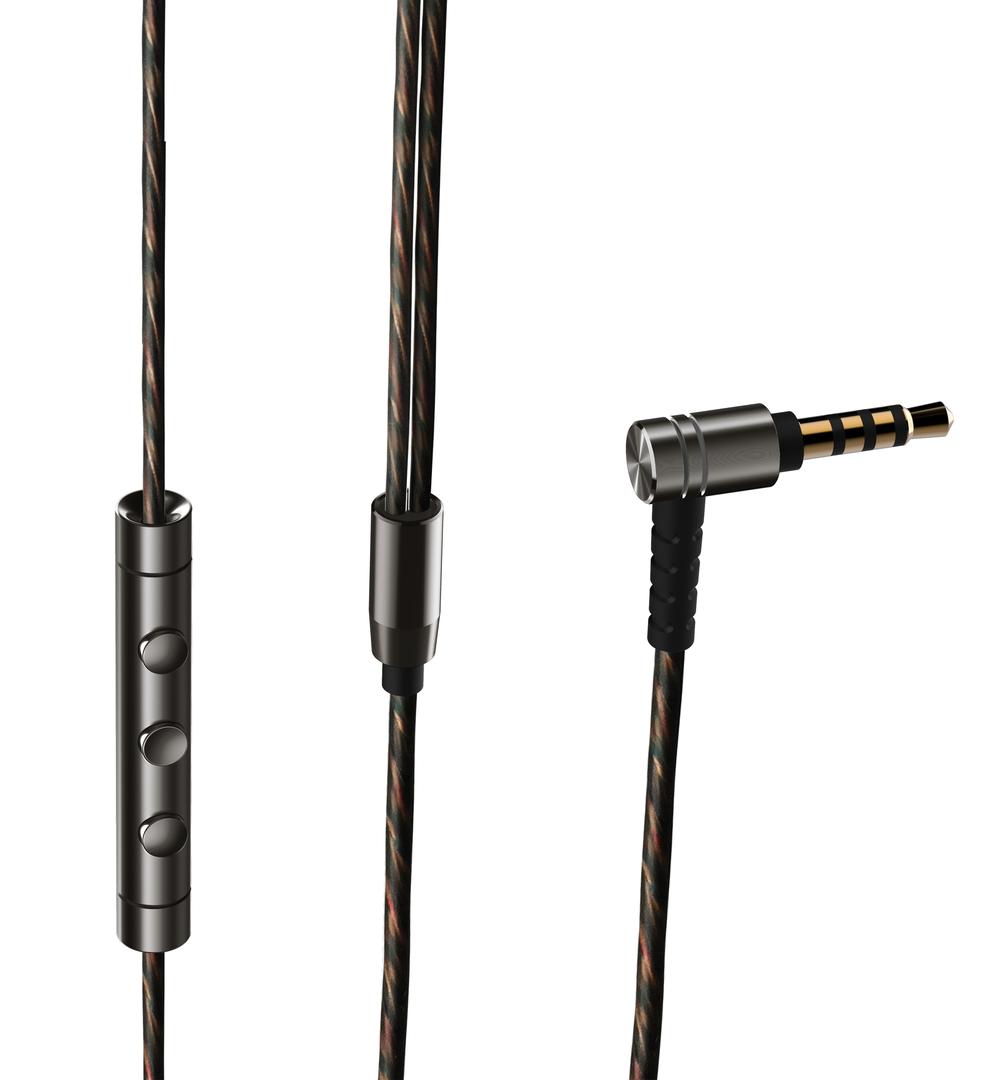 One significant improvement involves the Quad-Driver signal cables, which feature 99.99% oxygen free copper conductors protected by a smooth outer wrap formed from coated Kevlar fibres, where the idea is to increase cable strength while minimising cable-induced noise. Importantly, the cables also incorporate a new inline mic/remote module fitted with a MEMS microphone and that is compatible both with Apple iOS and Android devices. 1MORE says the module provides, “a built-in chip [that] automatically identifies your smartphone, tablet, or computer’s operating system, allowing you to make calls, control volume, and adjust tracks”.

Finally, like 1MORE’s Triple-Driver model, the Quad-Driver is supplied in attractive, upscale packaging and comes with a remarkably extensive set of accessories.  Accessories include a leather carry box with a flip-open magnetic-closure lid, a garment clip, an airplane adapter, a 3.5mm-to-6.35mm adapter plug, five sets of silicone ear tips (in sizes of 10, 11, 12, 13, and 14.5mm), plus three sets of memory foam ear tips (in sizes of 11, 13, and 14.5mm), a User Guide, and a 1MORE decal (showing 1MORE’s mascot teddy bear wearing 1MORE headphones). In short, everything about the Quad-Driver in-ear headphones and the package they come in suggests they might cost more than they actually do.

To get the measure of the Quad-Driver I conducted listening tests using my reference Questyle QP1r and Lotoo PAW Gold digital audio players, plus my iPad Air and Samsung Galaxy smartphone as sources. I focused primarily on comparing the Quad-Drivers to 1MORE’s excellent Triple-Drivers, though I also had on hand an extensive set of CIEMs from manufacturers such as JH Audio, Noble Audio, and Westone. Here is what my listening tests revealed.

In broad strokes, the voicing of the Quad-Driver is similar to that of the Triple-Driver, albeit with a heightened degree of treble extension, openness, and high-frequency ‘air’—qualities perhaps attributable to the Quad-Driver’s new ‘super tweeter’. But frankly, the biggest differences between the Quad-Driver and the Triple-Driver are not found in large-scale tonal variations, but rather take the form of across-the-board qualitative improvements. As the old saying goes, the ‘genius is in the details’.

From top to bottom, then, the Quad-Drivers deliver superior resolution, better speed and definition on transient sounds, and more full-throated and expressive dynamics. They also provide very noticeable improvements in reproduction of low-frequency textures and transient sounds. In short, the Quad-Driver preserves all the benefits of the Triple-Driver, while turning the imaginary resolution, focus, and expressiveness ‘control knobs’ up to 11 (or possibly 12, or even more).

For examples of these qualities in action listen to ‘The Mermaid’ from Norma Winstone, Glauco Venier, and Klaus Gesing’s Distances [ECM 16/44.1], and note carefully the percussive sounds of Venier’s prepared piano as heard in the opening of the track. The sense of ‘air’ surrounding the ringing piano strings is palpable, while the sharp attack and gradual decay of the notes is spot on, complete with reverberations that nicely reveal the acoustics of the recording venue. Then, focus on Winstone’s beautiful vocals and observe how pure and clear the timbre of her voice is and how natural and extended the vocal harmonics sound. Finally, listen to Gesing’s low-pitched reed statement that begins when the song reaches the 1:30 mark; the sound is low, richly resonant, and lets you clearly hear the reed vibrating in the instrument’s mouthpiece. To be honest, this track can sound quite good on many different transducers, but it takes a special in-ear headphone like the Quad-Driver to draw out the full, rich tonal colours and the sharply focused textural and transient sounds of which the song—at its best—is capable. Stated another way, the Quad-Driver is an in-ear headphone for listeners who are ready to step beyond merely ‘good’ sound to enjoy something noticeably better than that.

For a further illustration of the Quad-Driver’s capabilities, try the track ‘Seven’ from Lenny White, Jamey Haddad, and Mark Sherman’s Explorations in Space and Time [Chesky, 24/96 binaural]. This remarkable track features three world-class percussionists performing on a veritable panoply of percussion instruments—some high-pitched, some with midrange voices, and some with subterranean bass voices—all in a style Chesky describes as, “Funk meets world, meets classical!” The result, through the Quad-Drivers, is sonically superb, with each instrument’s voice clearly delineated from the others and with each instrument occupying a specific location within a broad and deep soundstage. Perhaps the most impressive single element, however, is the sound of very low-pitched bass drums, where the 1MOREs not only let you hear but also ‘feel’ the giant waves of bass energy racing across the floor toward the listener. This is, quite simply, breathtaking stuff to behold.

My take on 1MORE’s Quad-Driver is that it does everything the award-winning Triple-Driver could do, only much, much better. 1MORE’s Triple-Driver remains a fine transducer in its own right and one the offers superb value for money, but the Quad-Driver raises the performance bar in substantial ways that place it in an altogether higher performance category. For those who want a big taste of what expensive upper-tier universal-fit earphones can do, yet without having to pay those eye-popping premium prices, 1MORE’s Quad-Driver stands as a delightful solution.