Zanden Audio Systems’ top-of-the-tree Model 1200 phono preamplifier has been through several iterations over its long and illustrious career, but arguably none so significant as the move to the new Model 1200 Signature. The two ‘headline’ features are balanced operation (and consequently features twice as many valves as in the single-ended version), and an even greater set of refinements to its equalisation options, as the circuit now includes a provision to adjust the 4th time constant that equates to different cutter-heads used in the making of the record itself!

The ‘problem’ Zanden has long faced with the Model 1200 is there aren’t any problems. From the outset, 17 years ago, the Model 1200 (the first product in the Zanden range) left the designer Kazutoshi Yamada completely satisfied with the performance. As ‘how do I improve on this?’ is a significant motivational force in product design, improving on ‘complete satisfaction’ isn’t easy. Component parts might change with new components improving on old, and old components get discontinued, and these form subtle revisions in the design. 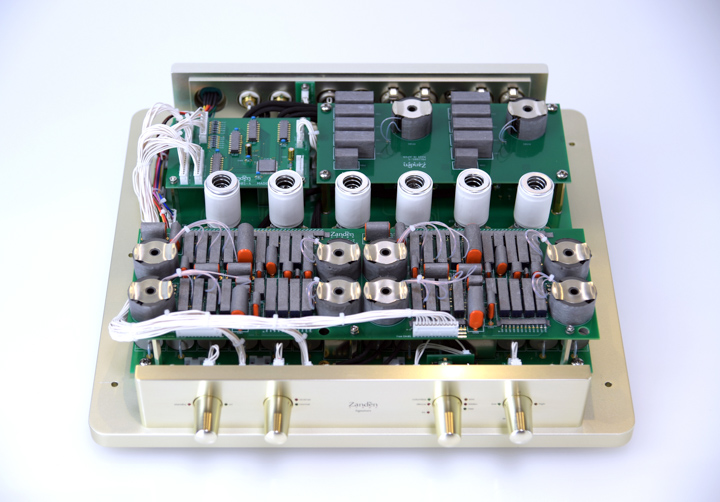 However, the change to the Model 1200 Signature is significant, as the move to a balanced design necessitated the development of a fully balanced LCR-type equalisation circuit. Given a phono cartridge is intrinsically balanced, and both the Model 3000 mk2 line preamplifier and Model 9600 mk2 mono power amplifiers in Zanden’s Classic line are fully balanced circuits as well, a single-ended only phono preamplifier seems a little out of kilter.

However, Yamada-san’s skills at producing one of the best sounding amplifier systems (which just happens to use balanced operation). He invented a unique circuit that compensates for a hitherto-overlooked defect of the balanced circuit and installed it first in the Model 9600 series to demonstrate the better sound quality of the balanced circuit without defects. From here, it was a logical step to produce a line preamplifier that exhibits the same benefits. What is that defect? He’s not giving the game away!

Because the Model 1200 phono preamplifier is an LCR design (a passive stage using an inductor in series, instead of a series of resistor/capacitor filters for each shelf in the EQ curve), the move from single-ended to balanced is less straightforward. Initially, this was a research project, as it was not expected that this fully balanced EQ circuit would achieve the sound quality possible from the single-ended circuit. However, not only did this balanced design meet the performance of the single-ended circuit, it ultimately eclipsed it… and the Model 1200 Signature was born!

From a surface reading of the Model 1200 Signature compared to the Model 1200 Mk 3, the two look almost identical from the outside (with simply the addition of XLR connections at the rear) with the move from three to six 6922s valves in the main unit being the biggest material change (the single 6922 and pair of SCA4 valves in the chrome-plated power supply box remain unchanged), not to forget improved transformers within the power supplies.

High-end phono preamps seem to be divided between those with fine granularity in cartridge matching or recording equalisation. Very few do both. The Model 1200 Signature retains the high-output MC setting of 480 ohms with 54dB of gain and its low output of 35 ohms and 64dB of gain. There is no fine tuning of impedance, gain or capacitance. These two main MC options do cover the majority of cartridges used today, however.

Like all previous Zanden phono preamps, the Model 1200 Signature includes EQ curves for Columbia, Decca, EMI, Teldec and RIAA, as well as polarity switching. Unlike all previous Zanden phono preamps, but like all upcoming designs starting with the Model 1200 Signature, this circuit now includes three positions for the 4th time constant: high for Neumann cutting lathes; middle for Ortofon cutting lathes, and low for Westrex lathes. These are actioned by pressing the EQ button the requisite number of times and your choice is indicated by a yellow LED. However, with potentially 30 (and in reality, eight+phase) different settings for each LP, it’s fortunately that Yamada-san has a team of highly-trained listener elves who have done a huge amount of listening, determined the correct settings for thousands of labels and imparted all that information in a periodically updated book supplied with the phono preamp. There is also a 10Hz subsonic filter. This upgrade to the equalisation options can be retrofitted to owners of the Model 1200 Mk 3, and this should be available before the end of the year.

I do not want to labour the EQ part of the Zanden design, however, in part because it’s such a hot-button topic among a few very vocal high-enders. Some consider the lack of different EQ curves a deal-breaker, others feel their inclusion to be the same, with little in the way of middle ground. Which, in my opinion, is a category error; even if you never move the Model 1200 Signature from its RIAA setting, you are playing LPs through one of the best phono preamps in the world. However, given those options are there and you have a handy guide to settings included in the box… try it. You might be pleasantly surprised at the end result.

Setting aside EQ then, exactly what makes the Zanden one of the best phono preamps in the world? First, it’s whisper quiet, and not simply ‘…for a valve-based phono preamp’. The previous Model 1200s were already extremely quiet, and balanced operation has helped here, both in balanced and single-ended operation. It’s also profoundly dynamic, and it’s here that the Model 1200 Signature scores over the already significantly dynamic Model 1200 Mk 3. Old favourites like ‘Autumn Leaves’ from Cannonball Adderley’s Somethin’ Else [Blue Note, 1st US pressing] give the interplay between Miles Davis’ trumpet and Adderley’s alto sax a scale and sense of realism that puts you right in the middle of the music, all underpinned by that piano/bass/drums backline that at once flows effortlessly and roots itself in three-dimensional space. This all makes for a record that you know backwards sounding fresh every time you play it. 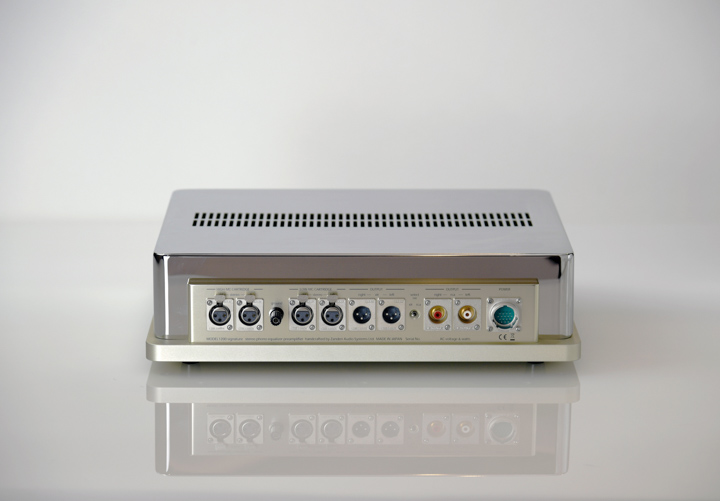 This energy was the same with every record played. The Zanden 1200 Signature has that rare balance of being ‘musically inviting’ without warming up the sound, being ‘insightful’ without sounding unnecessarily exuberant, ‘detailed’ without sounding at all etched or bland, and ‘dynamic’ without sounding unhinged. The presentation of soundstaging was as good as the record playing; not artificially boosted or curtailed. The tone of the studio shone through, too. Flipping between 1970s West Coast Reprise sound [‘Never Going Back Again’ from Fleetwood Mac’s Rumours] and a 1960s EMI recording of Vaughan Williams ‘Oxford Elegy’ wasn’t just the difference between classical and rock recordings; you could here the differences in studio settings, you could hear the way the two were mixed, right down to differences in monitors and how that changed the tonality.

Raw energy alone is not enough in top-end phono stages. Excellent soundstaging and outstanding dynamics is a given at this level. Even the sort of refinement that separates the very good from the best phono stages around can be had elsewhere. What sets the Zanden apart from all these things is the way it conjoins all these elements in an entirely effortless way. You almost fail to notice this cohesiveness until you play an LP through another phono stage and find the exercise sound punctuated and abstracted. This was always a mark of Zanden’s greatness in the 1200 series, and has taken a leap and a jump forward in the 1200 Signature.

It would be so easy for a phono stage of this calibre to drift into audiophile hell; making a ‘beauteous’ sound that has all the details and no substance. The Zanden Model 1200 Signature never makes that crossover, staying true to the recording no matter what. When that means Keef Richards [Main Offender, Virgin], it means moving from subtle jazz tones to raucous early live sounding 1990s rock, it can track those changes without softening the blow of either. In truth, however, much of this is going over old ground; the performance of the Zanden Model 1200 Yamada-san liked so much 17 years ago and has been the subject of many column inches in Hi-Fi+ and beyond remains undimmed; it’s just got more dynamic-sounding and a lot more flexible. 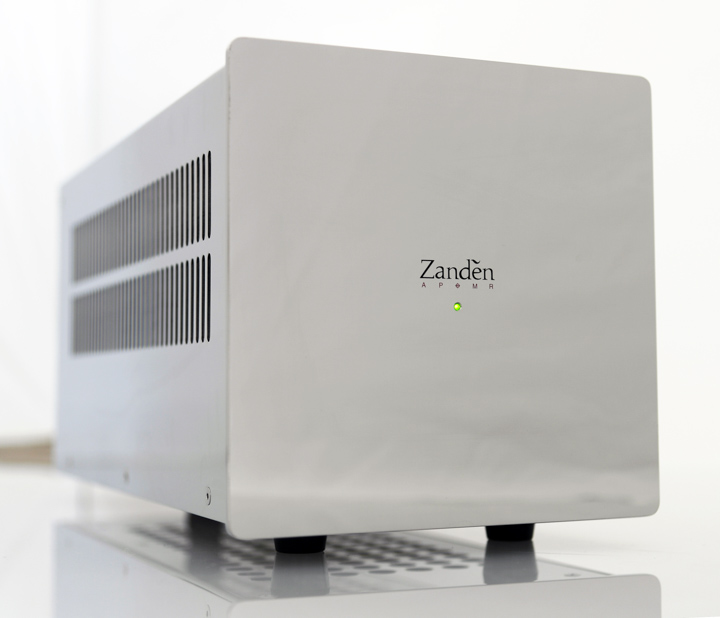 It’s so easy to ‘throw the baby out with the bathwater’ when updating a classic. The Zanden Audio Systems Model 1200 is one such classic, both in style and substance. The style remains unchanged and the substance is improved with no downsides. In other words, the best just got better.

PMC's domestic flagship is a powerful design that uses a wealth of new technology thanks to the company's close links to some of the UK's best physicists and engineers. Jason Kennedy is wowed by the results.

Having used and loved the Audiovector R1 Arreté stand-mount loudspeaker, Alan Sircom would like some extra oomph. Enter the R Sub Arreté subwoofer.