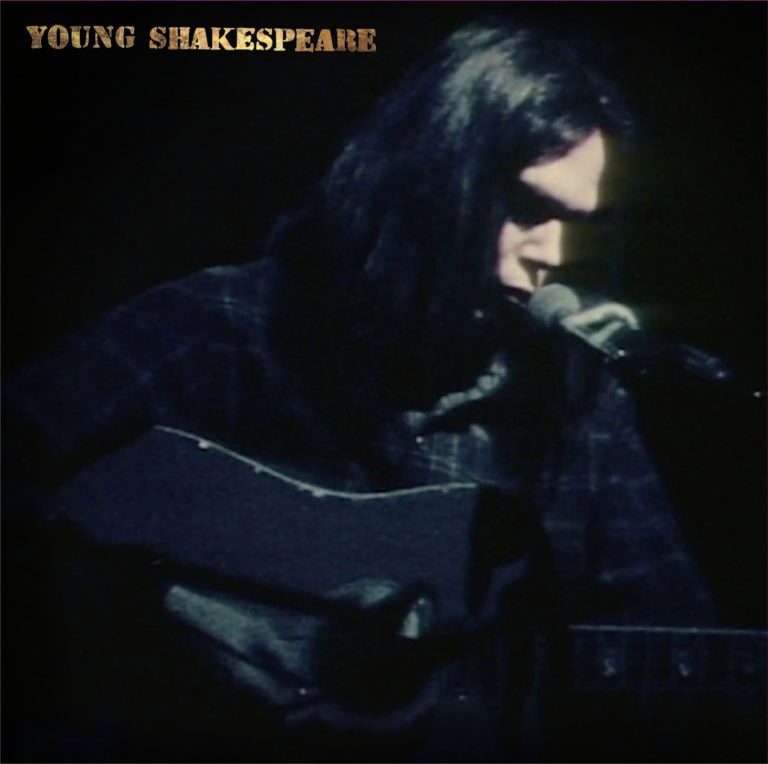 Young’s latest release in the Neil Young Archives Performance Series is Young Shakespeare, a live solo acoustic performance recorded on January 22, 1971 at the Shakespeare Theatre in Stratford, Connecticut. It was a part of the Journey Through The Past tour, recorded just three days after the Toronto, Canada concert released in 2007 as Live At Massey Hall 1971 and only a couple of months after release of Young’s third album After The Gold Rush. This concert was recorded on film for German television broadcast and is being release simultaneously as a single LP and a package with the LP, a CD and a DVD of the concert film. This is the first official release of the music, little of which has found its way to bootlegs. A short while ago, in advance of the release, Young posted to his blog that in his opinion the concert was superior to the Massey Hall recording, “I say this is the best ever. Young Shakespeare is the performance of that era. Personal and emotional, for me, it defines that time.”

The 12-song set list is shorter than Massey Hall’s 17 songs, and eleven of the songs overlap. Half the songs were new to the audience, having not yet been released on an album. And what a song list! Twelve songs drawn from Young’s most creative period. ‘Tell Me Why’, ‘Old Man’, ‘The Needle And The Damage Done’, ‘A Man Needs a Maid/Heart Of Gold (Medley)’ – you get the picture. A collection of greatest hits performed before anyone had ever heard most of them. And when they were officially released, they were built up with a band, produced in a studio with most of the warts burned off. Here, the songs are stripped down both acoustically and sometimes lyrically. Even more than in the Massey Hall concert, this is a more intimate Neil Young, more fragile and introspective. Part of that effect is the way the two recordings document the crowd noise—Massey Hall’s audience response up front and loud compared to the distant and more muted crowd noise in the barn like Shakespeare Theatre. Part of that fragile impression comes from the more out of tune piano used in Connecticut and the greater number of wrong notes struck there, as though Young was searching for a sound he had not quite identified. Notwithstanding these more technical explanations, Young seems to have shifted his approach and squeezed more angst from the lyrics. The biggest surprise is ‘A Man Needs A Maid’. The song, first appearing as a studio release on Harvest previously left me cold, with Young coming off a bit of a misogynist, a lazy bastard unable to pick up after himself. With slightly expanded lyrics and a more contemplative mood here, he presents as a likeable guy struggling with insecurity. On ‘The Needle And The Damage Done’ Young’s stage banter has been refined and his sincerity carries over into the diffident performance. In ‘Old Man’ Young seems to have wiped the earlier sneer off his face referring to the 70-year-old caretaker of his ranch, a sentiment he probably feels more comfortable with now that he is past that mark.

The recording was made by a German television crew, and the recording engineer was Dutch counterculture photographer and film and television director Wim van der Linden. It is a very well recorded concert, but not the equal of the Massey Hall concert. Or even the UCLA concert eight days later, used to pull ‘Needle And The Damage Done’ for Harvest. Much of the blame goes to the venue, with a Shakespeare Theatre being an inferior place for recording music. The voice is a little thin by comparison. The guitar lacks the three dimensional ‘you are there’ fullness found on the Massey Hall recording, but that is a tough comparison.

Unlike so much of Young’s output, this is not all analogue. Chris Bellman of Bernie Grundman used 192/24 bit Plangent-processed masters, a fact refreshingly disclosed on the back cover and record label. The 150‑gram pressing from Record Industry in The Netherlands was flat and quiet. This is an essential part of any Neil Young collection. Even if you have the Massey Hall LP set, this concert packs a more distilled punch. If it falls short of the Massey Hall acoustics, it shows Young growing up quick over just three days!

Zac Starkey's career as a drummer is very impressive (Oasis, The Who, Johhny Marr)... despite his father's discouragement. Still, what does Ringo Starr know about drumming? Sean Hannam speaks to Zac as the headphones that carry his name are launched.

The sensation that came up with her Emily's D+Evolution alter ego has created an album of solid jazz healing that fills the listener with hope according to Jason Kennedy.