It’s easy to fall into ‘silo thinking’ in audio; where a company that is best known in one category cannot ‘branch out’ into another. Which means when WestminsterLab, best known for its small but deceptively powerful REI (and previous UNUM) power amplifiers, started talking about its Standard range of cables, I was at best ‘sceptical’. Then the boxes arrived; eight small, elegant, light brown boxes that prove you can make ‘interference-fit’ card (try opening them!) with similarly elegant thin white cables inside.

The cable is called ‘Standard’ to differentiate it from WestminsterLab’s more upscale ‘Ultra’ range, but the two have much in common (Ultra is effectively an even more refined version of Standard with premium-plus grade connectors), and both take a no-compromises approach to materials science and mechanical integrity. For example, most cable brands will tend to go with some variation on copper, silver, or an alloy of the two. In contrast, WestminsterLab uses its own formulation Autria Alloy, and solid cores of this conductor are used throughout the cable range. Each core is, of course, enamelled (a black enamel made to WestminsterLab’s own formulation), cryo-treated, polished to a fine degree, and then inserted into a PTFE tube as a dielectric. 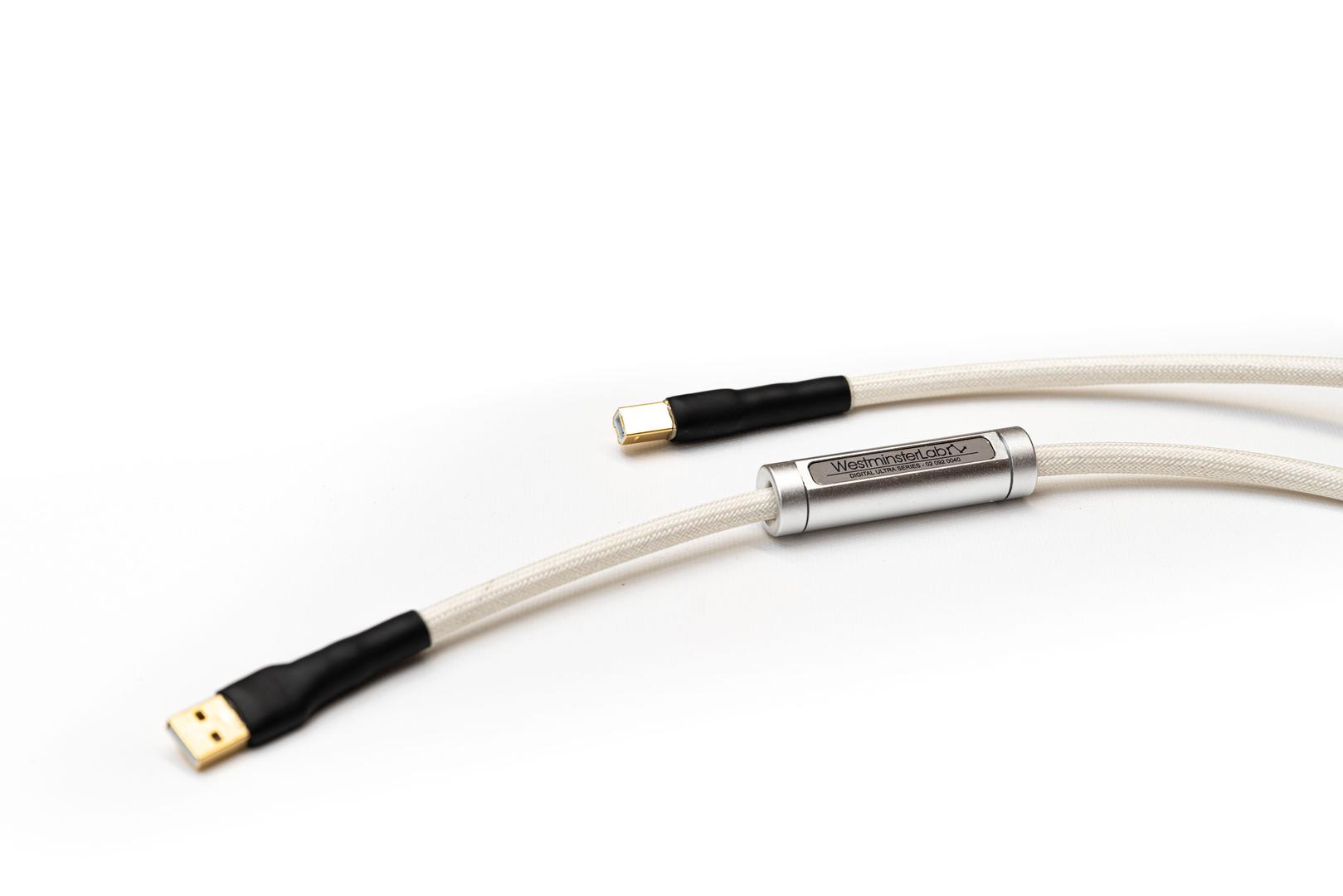 Most electrical conductors are twisted pairs, triplets, or quads (depending on use) and the twist is used to help reduce induction and the deleterious effects of magnetic fields on the cable itself. However, twisting conductors around one another can play havoc with the cable’s capacitance and in extreme cases this can end up dulling high frequencies. To counter this, WestminsterLab developed its unique Vari-Twist layout, which – as the name suggests – changes the angle of layout through the cable, to keep capacitance low through the length of the cable, thereby avoiding a sonic ‘signature’. Finally, the typical metal braided shield is rejected because WestminsterLab claims instead of ‘grounding’ interference, a metal shield absorbs and feeds the interference back into the conductors. Instead it goes for a carbon-fibre braid that the company claims actually lives up to the goal of reducing interference.

The same essential design is used for digital interconnect, analogue interconnect, loudspeaker, and power cables. As a result, there’s a sensational consistency between the cables. They are all directed toward the same musical goal. That might seem like stating the obvious (it is why people talk about cable looms and synergy, after all), but there’s always an exception, and it’s usually the USB cable. In fact, there’s good reason for this; Angus Leung of WestminsterLab was one of the first out of the USB starting gates developing a cable back in 2007, which developed many of the strategies used in today’s cables.

What all these cables do is add and subtract as little as possible to the sound. That’s supposedly pretty much a given in cables, but it’s when you actually hear that in full effect that you realise how far many are from this goal in reality. You first hear this as a ‘dry’ and ‘precise’ presentation, but quickly come to the conclusion that ‘dry’ isn’t correct; the performance isn’t ‘dry’ (as in ‘arid’)… it’s free from the flabby, ill-controlled sound that so many cables deliver.

After that realisation, things go a bit Batman. Not the moody ‘Dark Knight’ modern interpretation… the 1960s Adam West version. Here’s what I mean; you listen to an orchestra playing something that starts relatively pianissimo – Rachmaninov’s Symphonic Dances [Zinman, Telarc], for example. Your hi-fi-hardened brain hears those quiet strings and thinks ‘where’s the bass? There should be bass?’. Then, BAM!! In come the basses and KAPOW!!! Go the timpani. As they do in reality. You play something centre stage and wonder where the soundstage went, then as the rest of the band kicks in BLURP! And the soundstage takes on its right size. Leading-edge detail… Z-ZWAP! Dynamic range… POWIE! Microdynamic shading… SPLOOSH! Holy high-quality cabling, Batman!

Of course, all this could lead you to think the cable is brightly lit, sharply coloured, and set at a jaunty angle. Nothing could be further from the truth. These are cables that portray with exuberance, yes, but not over-exuberance. There’s excitement, but only if called for by the music. It’s a poised and balanced sound, not an overt one.

A fine example of how this cable resolves musical detail is listening to the whole Rolling Stones’ Stripped album [Polydor], rather than simply the one almost accidentally well-recorded track. The Stones have a terrible reputation for bad recordings and that’s largely the case here; sounds are compressed and ill-focused, albeit Jagger’s voice often being extremely clear (if his odd diction can ever be called ‘clear’). The WestminsterLab does a fine job here, adding some depth and much-needed swampy richness to tracks like ‘I’m Free’ or ‘Wild Horses’. In fact, closer listening shows that richness has always been there, but it needs some help making it to the fore, pushed back by the jangle of those early 1990s piezo-electric pick-ups on acoustic-electric guitars and big but ‘light-touch’ drum sounds.

If there weren’t revelations and Damascene conversions when listening to WestminsterLab, it’s only because I’m used to the really top-table cable, but it’s worth considering that the entire WestminsterLab cable system from stem to stern costs about as much as a single Nordost Odin 2 power cord, that puts things into some kind of perspective. Of course, with a cable as resolving as Standard, and this reliance on the electronics to do the heavy lifting from a sonic perspective, system matching does become crucial. This isn’t a cable that can ‘bling up’ a cheaper system or even ‘lift veils’ in an entry-level high-end system, and it is absolutely not the kind of cable that can be used as some kind of Band-Aid to balance out an unbalanced sounding system. No, you need to have all your sonic ducks in a row BEFORE you go down the WestminsterLab route for the best possible performance. 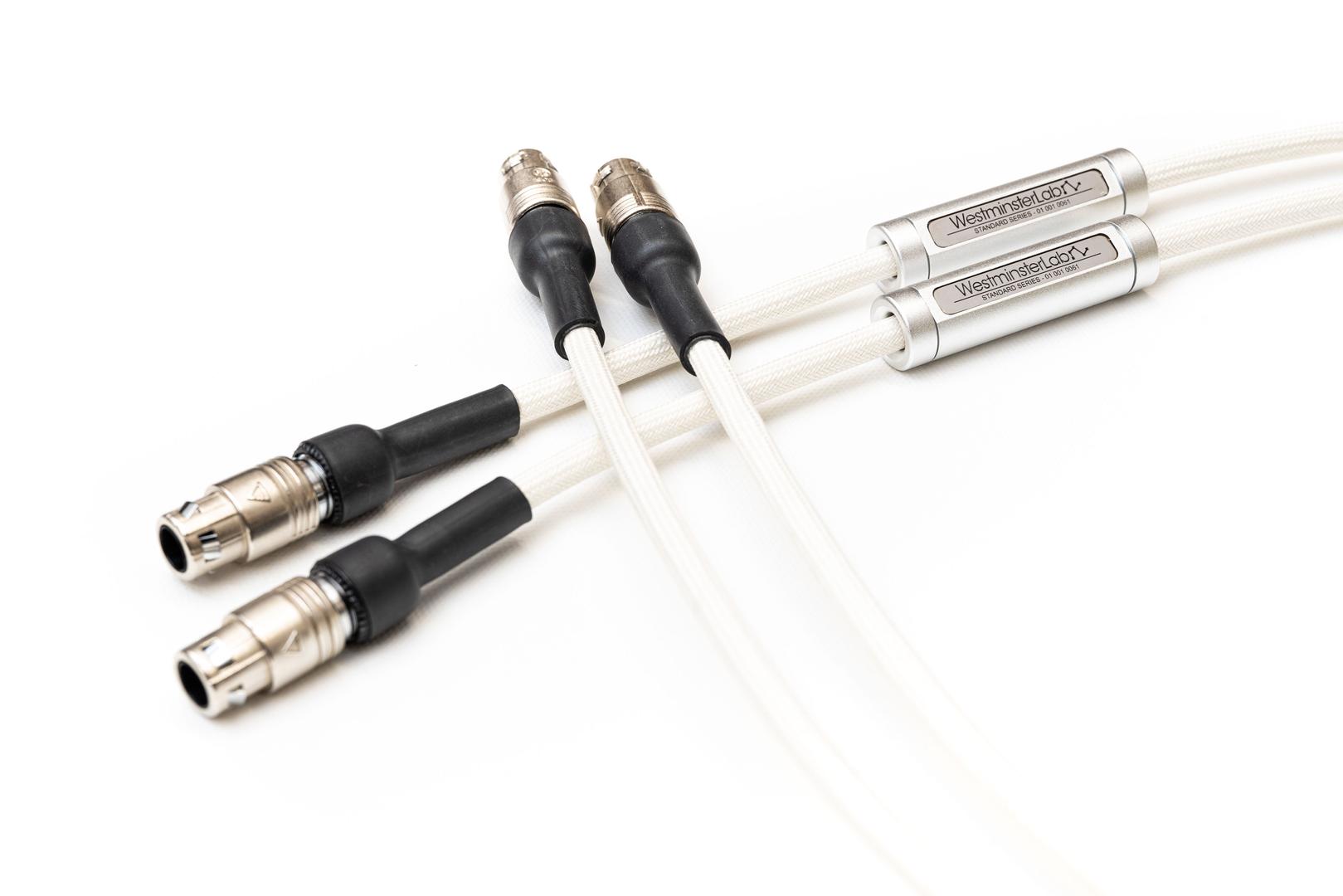 The name is deceptive; there’s nothing ‘Standard’ about WestminsterLab Standard cables. These are excellent, ear-opening designs that are superb in their own right, but might also be a fine opening gambit in a wholesale switch to WestminsterLab!