My first opportunity to become intimately acquainted with Totem Acoustics was through my previous Hi-Fi+ review of the Sky Tower loudspeakers last fall. I admit, a bit sheepishly, that after being bowled over by the Sky’s crisp holographic presentation I had casually come to regard Vince Bruzzese’s Totem as a speaker manufacturer whose bread was buttered with floorstanders. Naturally I was quite intrigued when I got the nod to review Totem’s freshly reimagined V2 model of the Fire bookshelf monitor. The upscale new Fire V2 speaker sits on Totem’s tippity top shelf in their pinnacle Element series. Anticipation of experiencing Totem through a two-way bookshelf monitor continued to build daily until I routinely found myself making trips to open my front door just to see if I could glance the UPS truck turning down my block.

When the doorbell mercifully did ring quite late one hot summer evening, I confess I had not the self-control to wait even one more night before greedily tearing into the boxes. For a few spellbinding moments it was unclear if I was love struck by the shape of the Fire’s sexy tapering trapezoidal lines, or if I had actually hit my head on the front door jamb and my vision was still a bit woozy from impact. You see the new Element Fires are quite visually beguiling being purposely constructed to avoid any parallel lines, an effect that can become an optical illusion of sorts. To my eyes (and my faithful onlooking Sky Towers who were certainly turning green with envy) the unique shape was most definitely aesthetically pleasing. Visually arresting is only half the story though, the unique shape of the Element Fires are said to achieve phasing coherence and bass accuracy in the lowest octaves. The shape attempts to avoid any standing waves which will help enrich clarity in the midrange band and minimise cabinet resonance. 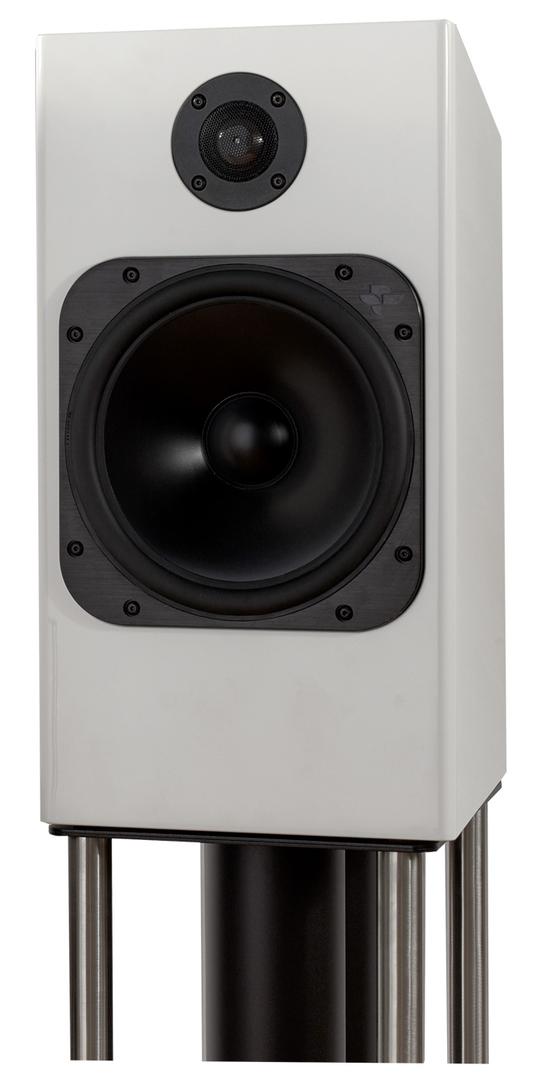 My review pair was ‘Dusk’ coloured and virtually shone under three splendid coats of lacquer. The lacquer was so luminescent it might as well have been adorned in a diamond necklace, or so it seemed as the speakers were dropped into place front and centre of my home system. One of the improvements from the V1 to the V2 version of the Fires was a far larger sonic sweet spot so, it being late in the evening already, I set them up square about 6’ apart or so and let ‘em rip. It took no more than a half a minute listening to my first track before the sonic jungle quickly overtaking my living room signalled that everything I knew about monitor playback was about to get flipped right on its head.

The Element Fire is anchored in Totem’s success with their Tribe series. The Tribe’s celebrated 100mm version of the world-famous Torrent driver inspired Mr. Bruzzese to see how far he could push the envelope with a fairly priced bookshelf monitor. Vince isn’t shy about letting the industry know he feels he has created a dead ringer with the V2 Element Fire. Vince has anointed the Fires as “the finest monitors on the planet.” How is that for booting a new set of speakers through the curtain out into the spotlight? No pressure, right? However, big talk aside, for your entry fee it is easily demonstrable that these new versions of the Element Fire are packed and then re-packed with so much improved technology that your head is going to get woozy. Or wait, maybe that’s because you are still looking for parallel lines in the speaker cabinet.

On top of being easier to drive than their V1 predecessors, in virtually every place one could view the new Element Fire, you will find substantive technological improvements. There are almost too many to mention here, but we could start what I have dubbed “Totem’s upgrade parade” by mentioning the titanium tweeter. The Fire sports an improved 25mm dome tweeter which now includes a 0.9cm thick front aluminium faceplate and finned aluminium alloy chamber. The tweeter section employs a new crossover and also a new internal bass tuning design that doubles the frequency response in the first audible octave. Other floats in the upgrade parade include bi-wire ready platinum WBT four-way connectors custom fitted to annealed aluminium plates, ramped up efforts to control quality by slow producing the artisan speaker cabinets, and Totem’s proven signature borosilicate cabinet dampening techniques. More reading on the list above is encouraged, but the Fire V2’s most significant technological ace in the hole is the reborn Torrent driver.

Fire V2’s new 178mm Torrent woofer is hand assembled at Totem’s home base in Montreal and the driver boasts more damping, a larger dust cap, and is a bit shorter and more compact than previous versions. Already a celebrated and stunning piece of technology before revisions, Totem says the more compact nature of the V2 driver will allow the neck in the voice coil a stronger connection to the driver’s cone. This stronger connection has the dual effect of smoothing out the midrange and bolstering deeper bass response. While re-tooling the physical aspects of Torrent, Totem is also begging to make its mark with new break-through magnetic field technology. Totem has found space in the driver to add another magnet (previously 16, now 17) to stretch the concavity of the magnetic cradle. The copper plating around the driver’s magnetic structure has been changed to a tri-laminate, and that Canadian warlock Mr. Bruzzese says he has also included a few more undisclosed proprietary improvements thrown in for good measure as well. These sum changes to the magnetic components assert instantaneous control sonically by continuously immersing the voice coil within the magnetic field. The result is a highly engineered driver that has virtually perfect pitch, free flow of energy, phase correctness both on and off axis, as well as incredible scale and imaging height.

Thankfully given such a sophisticated speaker I was allotted an extended review period to let the Element Fire V2s fully break in. When cresting approximately 200 of Totem’s listed 300-hour break in, the Fires really started to reveal the advantages of a top class monitor. The Torrent driver suspended at just below eye level instead of being tethered to the floor opened up a new level of width and depth that was undeniable in the presentation. Suspension of the driver minimised unwanted vibrational interactions with my hardwood floors and instruments as a well as vocals consistently represented vivid space and depth around them. Never once did harsh adjectives like analytical or sterile come into my thoughts while listening; this is a musical speaker if there ever was one. So enough reviewer vaugary, can I mention Funkadelic now please? My extended time with the Element Fire V2 could well be summed up by listening to Eddie Hazel’s comet guitar transform my perceived boundaries of time, space, and soundstage. Maggot Brain’s [Westbound] self-titled opening track with the Fire speakers was ten glorious minutes of trying desperately to keep up with Eddie’s serpentine guitar as it slithered and wiggled its way through an obscenely wide-open soundstage. Eddie’s shape shifting guitar continually pushed further and further past the expected edge of the Fires placement until the whole affair became nothing short of unearthly. Take my word: I have never gone that deep into Maggot Brain with a floorstander, whereas the Element Fires took me somewhere new. The Fires proved themselves versatile too when tested with two very different types of amplification and seemed to have a sixth sense about the goal of the exercise. When given pure solid-state power courtesy of my Rega Osiris integrated the Fires responded with brilliant detail and accuracy. For the tube lovers, the Fires ate up a softer sounding Luxman LX‑380 producing meaty textures and a sense of vocal presence that blew past any rival I have ever heard. So, what would I say if you twisted my arm and said, “Hey Mr. way too positive Reviewer man, give me something that brings these back to earth!” Well I would close my eyes, think for a minute, and probably tell you that in proportion for a few choice recordings I didn’t hear the top end articulated as well as I had wanted. And then I would add that bi-wiring didn’t really produce any sonic benefit at all when I tried it with the Luxman… but guy, come on, you are twisting my arm remember?

The Element Fire V2 is an incredibly complex and nuanced sounding speaker. At its best it holds all parts of the sonic spectrum together with a consistency and continuity that I have rarely heard in a sub $10,000 speaker. For $7,000 these guys are a steal and no question several rungs up the ladder from my very capable reference of Totem’s Sky Towers. Worth every penny!