The Killing of Eugene Peeps 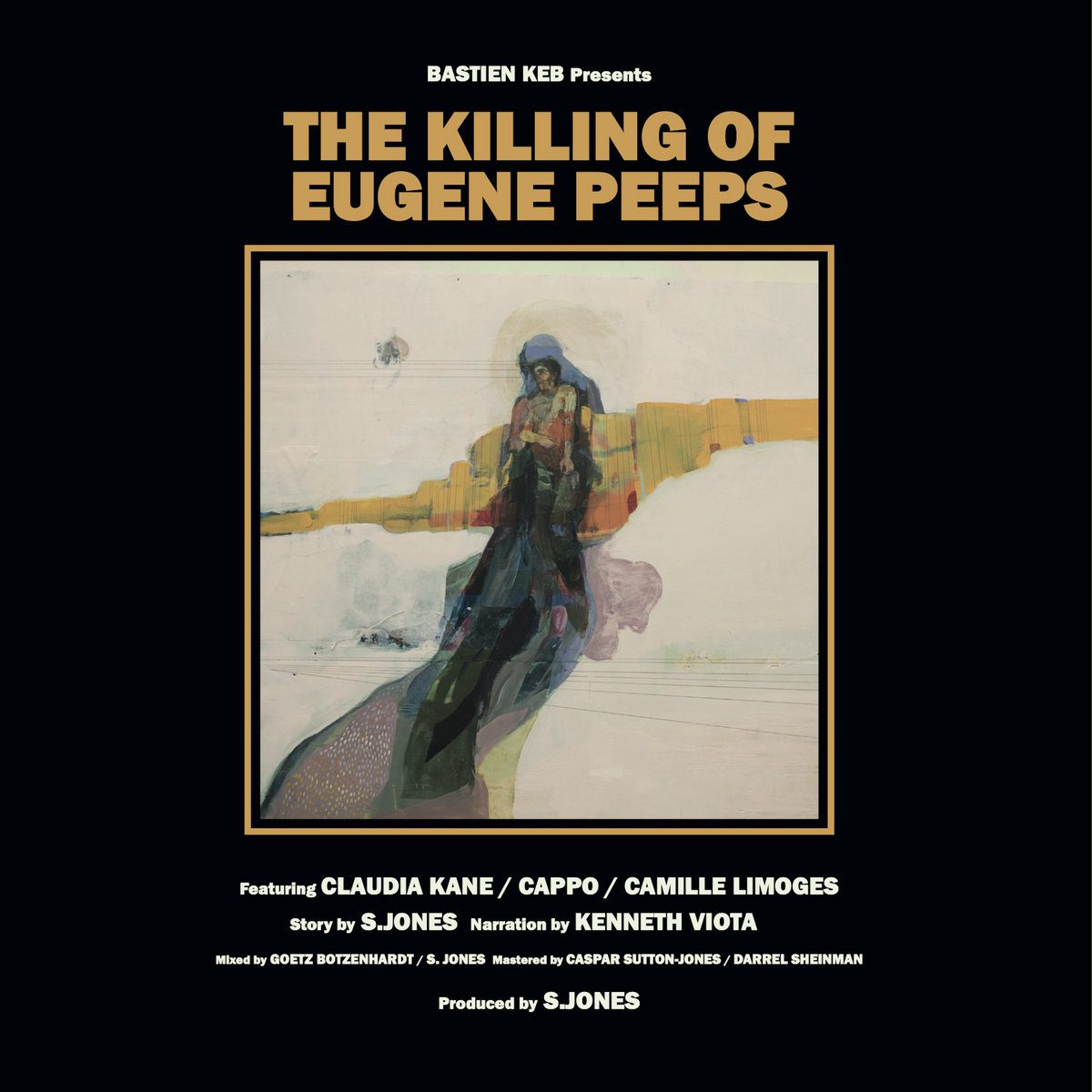 The film noir world has long been a fascination among the more exciting musicians; it inspired many of Tom Waits’ best works, and avant-garde sax player John Zorn dedicated an album to Mickey Spillane. Likewise, British composer and musician Bastien Keb draws on the dingier side of the 1950s and 1960s soundtracks for The Killing of Eugene Peeps as it’s a tribute to that style and era.

Bastien Keb is the stage name of Sebastian Jones, a multi-instrumentalist whose first love is the guitar. However, he also plays the trumpet, bass, drums, piano, flute and a variety of other instruments on this distinctive album. Keb started out making music for TV and film, and he continues to do so on The Killing of Eugene Peeps; it’s just that no one has made the movie to go with this soundtrack yet. Keb may play all the instruments here, but he employs the vocal talents of Kenneth Viota. Viota provides the narrative voice that gives the album so much of its late-night, back street flavour.

Or at least that’s the way it looks on the credits. Kenneth Viota is a very obscure person, or he’s a figment of Keb’s imagination. Some reviewers refer to him as being ‘a friend’ of Keb, but we’ve heard that one before! Either way, it’s the perfect world-weary voice. A voice powerfully evocative of black and white films from a grimier and seemingly more dangerous era.

Keb recorded The Killing of Eugene Peeps with a single mic in his bedroom and did all the production; it sounds like he used samples because there is so much depth and colour in the sounds captured. However, that’s not what the credits suggest. He did have some help from vocalists on various tracks. In addition, Will Morrison wrote the lyrics to two of them, while Kep credits Alex Judd with bringing the strings. Also, there is a sense of there being more than one violin presumably created through multi-tracking. Keb is more than a one-person band, but you have to admire Keb’s production skills.

The album starts with ‘Main Title’ to emphasise its cinematic inclinations. It’s a masterful conjuring of evocative soundscape that plants you firmly in the noir world with strings, horns and what sounds like vibes. Consider ‘Main Title’ a testament to bedroom recording that would once have taken an orchestra and a large studio; it’s now possible with a computer, a mic and a lot of talent. “The city at night is a beautiful thing. Take me away,” says the narrator as a soft melody comes in. ‘Lucky (the Oldest Grave)’ has a more contemporary feel in the Bon Iver style with piano and string accompaniment; its connection to the album is a sense of melancholy.

‘Rabbit Hole’ continues the vibe with a great guitar tone and layered vocals. These sit on top of a background filled with minutiae and texture. Its dreamlike ambience contrasts with the narrator’s return on the ‘God Bless Your Gutters’. This interlude introduces a darker atmosphere, which further develops in ‘Theme for an old man.’  This track’s crumpled brass band beat intro moves into a mellower funky groove worthy of John Barry at his most colourful and exotic.

The narrator returns for ‘Can’t Sleep’ over a lolling beat, “he can’t sleep with a full neck”, it seems. Lalo Schifrin would appear to have cast his spell over ‘All the love in your heart’. This track combines flute, strings and drum in a perfect pastiche to the great soundtracks of yore.

If I had to pick one track to represent this album, it would be ‘Young Ponies.’ The track’s William Burroughs-Esque narration over piano and bass with harmonised vocals makes ‘Young Ponies’ gloomy yet beautiful with a tremendous choral finale. ‘Street Clams’ provides a contrast with psych-funk guitar and vibes, interspersed with brass to immense effect. ‘Paprika (featuring Cappo)’ is an abrupt switch to rap with synth backing that seems out of place here.

The first nine tracks are perfect in their rendering. The following nine have their moments but don’t add to the whole. Overall this album is a remarkable musical and sonic achievement. It’s also an album that makes a decent system shine, especially on vinyl.

Bastion Keb on Bandcamp: The Killing of Eugene Peeps

After the US, Japan and China, BAYZ also lands in the UK

All The Good Times Are Past & Gone

In 24 years, Welch & Rawlings have released only 7 albums. They haven't saturated the market, this is the first album jointly credited to them both.