I was struggling to come up with a hook for the new LS3 by Swisstone, another famous brand from the 1970s brought back to life by Graham Audio. Then, I bought a suit for a friend’s wedding and it hit me. I was walking through the men’s section of Marks & Spencer and found the company’s ‘Savile Row Inspired’ suits. That’s it! The LS3 is a ‘BBC Inspired’ loudspeaker.

Put simply, the LS3 is a small, sealed-box two-way loudspeaker that uses many aspects of classic BBC loudspeaker designs, but strips back the more costly parts of such a design, doesn’t stump up for any kind of BBC licensing, and delivers a loudspeaker that gives the listener a lot of what the LS3/5 or LS3/5a might offer, for less than a grand! It’s not a LS3/5a ‘lite’ in every respect (for one thing, it’s finished in piano gloss and is actually the footprint of the LS3/5a turned through 90°, so it’s deeper than it is wide), but it gets listeners on nearly the same page of The Radio Times. 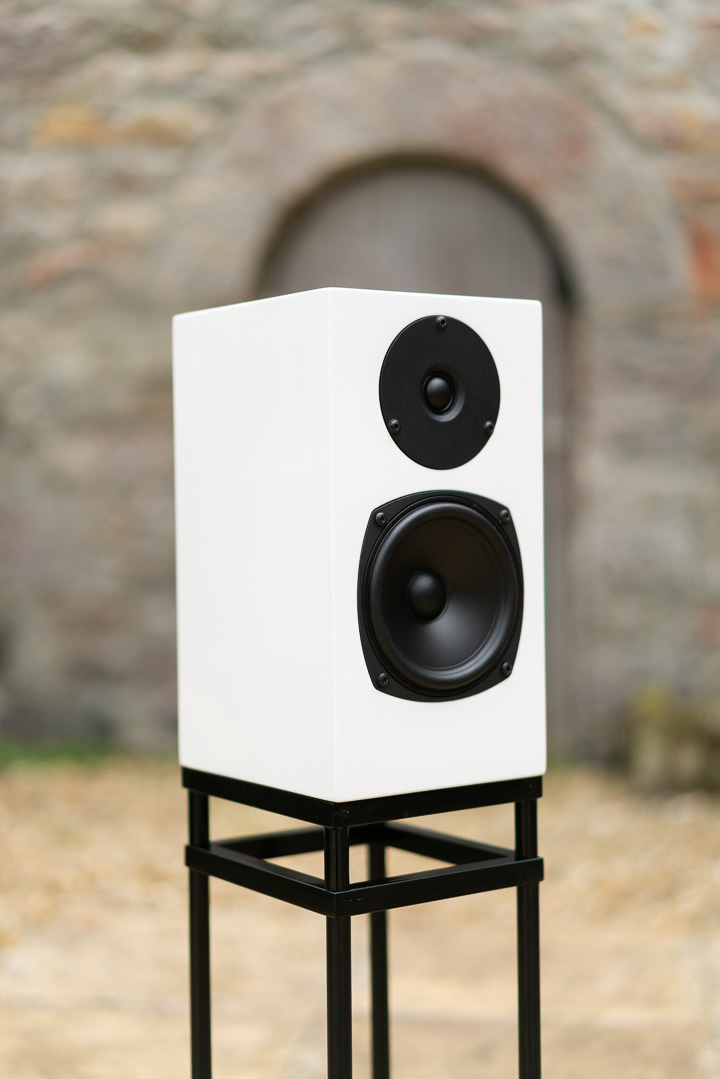 As common to Graham Audio (and its subsidiaries), the LS3 is a Derek Hughes design, but instead of the custom-made Volt units found on its more upscale models, this one uses a SEAS 19mm soft-dome tweeter coupled with a 130mm polypropylene mod-bass made by and doped by Graham Audio. The actual manufacturer of the driver remains undisclosed. Like other Graham designs, it is also single-wired and uses the same gold-plated multi-way terminals found in other models from the brand.

The big change is the cabinet. It’s piano gloss and the mid-bass drivers sit on – rather than behind – the front baffle. Instead of a grille surround that looks nice but does introduce a few minor baffle-step phase issues, the magnetically attached grille stands proud of the speaker and is best removed in serious use. Because the cabinet has the same footprint as the LS3/5a (albeit a footprint that suffered a nasty ankle injury), stands designed for the classic BBC design can work here if the top-plate is turned through 90°. I used the same open frame designs as used with the LS3/5, and this is a perfect partner for the LS3, too.

This was a loudspeaker that benefited from a small amount of running in, something that ‘would never do’ with the LS3/5a. Nevertheless, a few hours of shake-down does seem to bring the speaker together. I used the humble little LS3 on a range of amps, including a Primare I35, a Devialet Expert Pro 140, and the Cambridge Audio Edge tested in this issue.

The exercise is to squeeze LS3/5a sound into a cheaper package, and it works. Mostly. The key benefit of the LS3/5a has always been outstanding speech reproduction (its original role was as a broadcast monitor in outside broadcast vans for BBC TV and Radio, and much of that programme would be speech based). Few loudspeakers approach the LS3/5a even today in getting this vital aspect right, but the LS3 – in great fairness – does better than most. My stock speech examples are – depending on mood – either Richard Burton reciting the opening to Dylan Thomas’ Under Milk Woodor an episode of the original radio show of The Hitchhiker’s Guide to the Galaxy[both BBC Productions]. This time, “Starless and Bible Black” won out over Vogon poetry, and it was clear the LS3 was articulate and capable of lithe changes in microdynamics as it coped with Burton’s coal and whisky born vocal gravel. It wasn’t perfect, as there was a slight emphasis on the upper bass, as if he had slightly more whisky than usual. This is Richard Burton we’re talking about, so for ‘slightly more whisky’ read ‘all the whisky’ but that mild thickening gives a tenor voice some extra body, and – unless you are listening to that remarkable voice that Richard Burton possessed – for most voices, that bit extra is well received. By way of contrast female voices are very well handled here; I tuned into an edition of Woman’s Hour on Radio Four (my wife listens religiously) and those voices well known to me were projected into the room and had a correctness of pitch and timbre along with that excellent vocal articulation.

Moving away from vocal and onto solo piano, a lot of the character of the LS3/5a remains intact. Keith Jarrett’s Koln Concerts[ECM] is a fine example as it’s close mic’d enough to hear his vocalisations while playing, and yet they never intrude on the music. The piano itself is excellent, in the classic LS3/5a ‘better than the real thing’ sound. The LS3 is not as precise at rendering the decay and release of piano tones, but it gives the piano a sense of fullness and projection into the listening room that is very alluring. 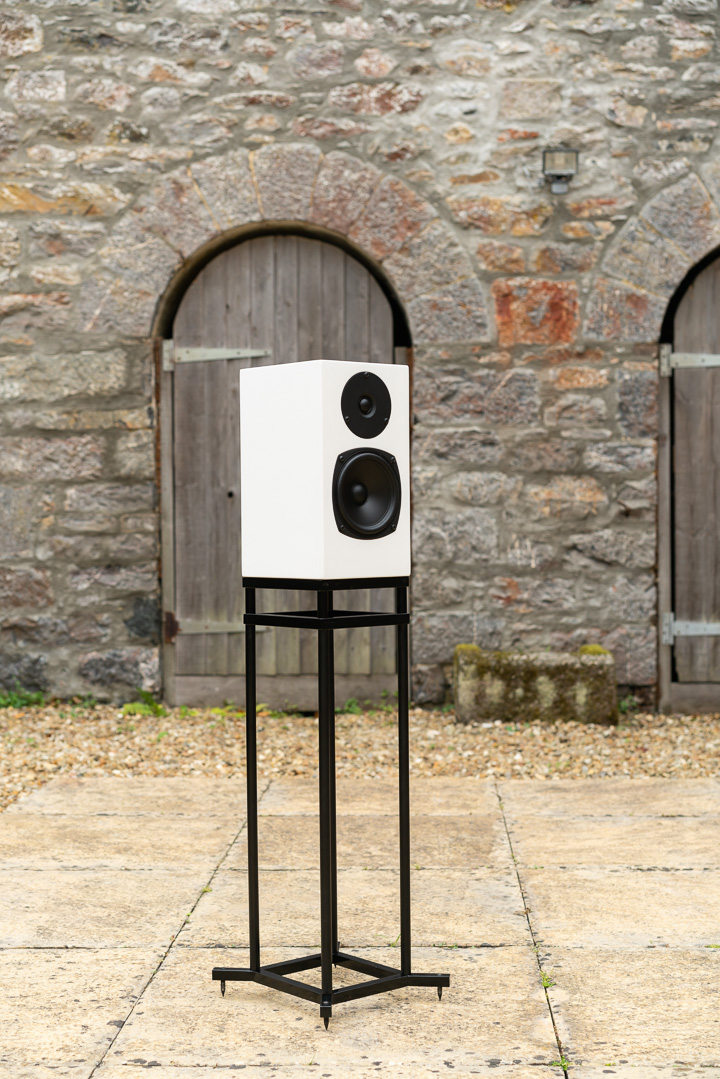 Moving over to the big guns is often what shows up the failings of small speakers. It’s unfair to unleash Mahler on a pair of tiny speakers, but actually the LS3 acquits itself well. Unlike the LS3/5a (which is popular in audio shows because it doesn’t even show up for work in the lower registers and doesn’t trigger room boom in the process), the LS3 fares at once better and worse, here; better because there is more of a sense of bass taking place, and worse because that bass is not totally accurate. It’s enjoyable and entertaining but I can’t help think there’s a bit of an 80Hz boost at play to make music sound more alluring. Not in the exaggerated way of 1980s British boxes, but a definite sense of a double bass (or a bass guitar) being fleshed out. For many, this is no bad thing.

I found the LS3 the perfect antidote for ‘corporate-fi’; that inoffensive but sonically bankrupt sound that comes as a result of larger companies building loudspeakers by committee. OK, so the audio world is now sufficiently small enough that our version of a multinational conglomerate could hold a meeting in an elevator, but the fact remains there is something of a ‘safe’ sound emanating from the drivers of some of the larger brands that only has a passing acquaintance with music. The LS3 doesn’t play that particular game and sounds all the better for it.

Of course, that also means its not perfect, but I don’t think the LS3 was designed to be perfect. It was designed to give a good working impression of a LS3/5a at a fraction of the price. Think of it as 85% of a LS3/5a for less than half the price. And in that task it achieves the goal well. OK, scratch the surface and you might see how it happens, how it’s deliberately slightly tailored to sound good, and sound fun. You might notice that in getting rid of the lip, the LS3 trades one off-axis set of concerns for another and that results in a very small stereo listening space (it doesn’t fill the room with sound quite as well as the LS3/5a or bigger speakers). It’s not that scratching the surface will unveil the monster beneath the veneer, but more shining a bright light on its performance exposes where the greasepaint is coming off.

In fact, the LS3 is perhaps a more modern and universal loudspeaker compared to the LS3/5 and LS3/5a. The bass response has a touch more depth to it (it’s still a 110mm bass driver though… not a chest-compressing dub reggae sound-system) and is capable of a lot more volume headroom. This doesn’t come with great increases in dynamic range (although the LS3/5a is a fair-to-good performer in its own right), more that it just increases the potential maximum volume levels for that dynamic range. In other words, it plays louder, not more dynamic. 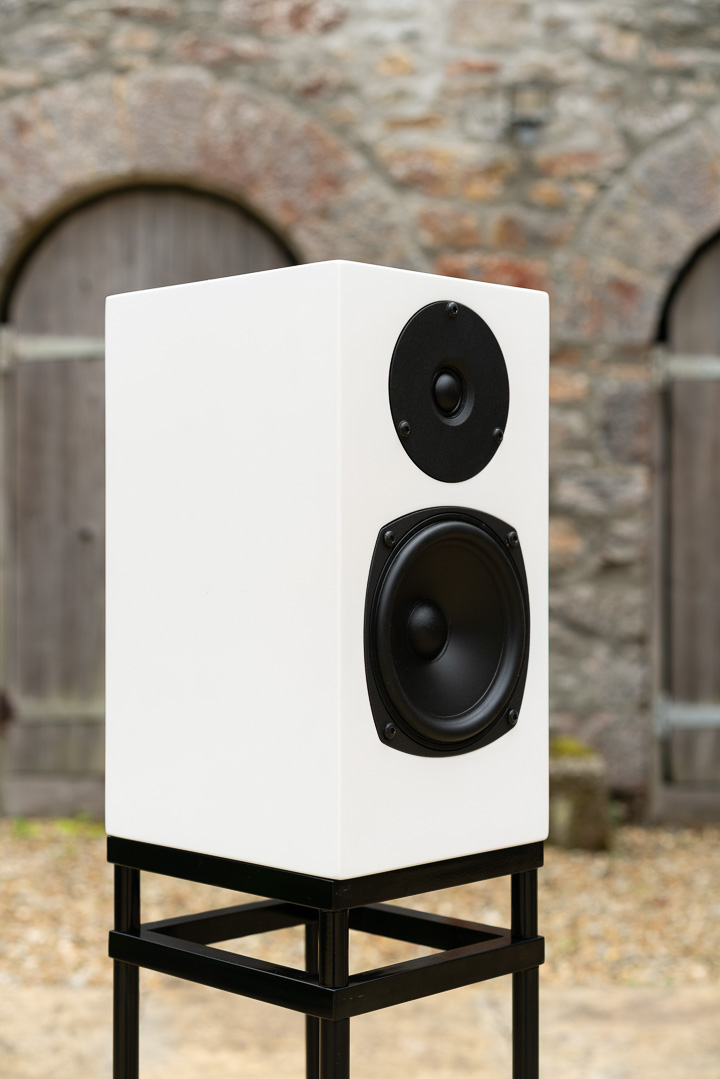 Graham Audio thinks the Swisstone LS3 is a good first rung on the ladder that leads to the LS3/5 or LS3/5a, but that casts it as an impressionist, and that isn’t the whole story. In reality, the Swisstone LS3 is a fine speaker in its own right and is extremely well price positioned. I can’t help but think of it more as a tamed Linn Kan, with the added excitement, fun, and its impersonation of bass energy that loudspeaker turned in. It’s not as uneven as the Kan was, and that unevenness was the Kan’s best, and worst, aspect. But those wanting the entertainment of the Kan with the intrinsic honesty of the LS3/5a might just find the Swisstone LS3 is all the speaker they need.

Maximum Output: 96dB for a pair at 2m

Best of British. Node is selected as an official partner of the RREC and RROC’s Bentley 100 Album