This also comes with a marked increase in soundstage size and solidity. Instruments have their own three-dimensional space marked out in many systems, and often that comes with a sense of being rooted to the floor, but here that doesn’t just take on a three-dimensionality; it gains a visceral, physical presence that’s almost unnerving. Playing Mozart: Piano Concerto No 23 in A [Momo Kodama, Seiji Ozawa, Mito Chamber Orchestra, ECM] and the spacing and the spaces around the orchestra are perfectly portrayed, and the piano is both beautifully rendered and sits in its own rooted position in space more ably than with other cables. It adds to a sense of focus both in audio and musical terms that is sublime.

I expected quiet backgrounds (it’s a Shunyata thing) but they fall away still further than anticipated with Omega QR-s. It’s like even the quietest electronics have more to give, and even the quietest power feed has noise to be removed. Omega QR-s does that brilliantly. Actually, ‘brilliantly’ is not the right word, as there is no additional ‘brilliance’ to the sound. The tonality of the system remains unchanged… Omega QR-s just brings out the best in the kit you have, whatever kit you have. 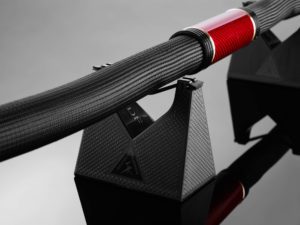 The trio of DF-SS ‘Dark Field Suspension System’ cable elevators act like a little suspension bridge for your Omega QR-s, with the cable resting on a stretchy black polymer between the two towers of each riser. The riser itself is made of a hard black polymer, is mass loaded (you can hear the contents move if you shake it) and has a little set of adhesive feet to stop it from sliding around on a hard floor. The idea is the cable never touches the floor, thereby keeping ground-based vibrational energy at bay. Given the proximity of power cords and speaker cables to loudspeakers and the vibrations loudspeakers can put into the floor around them, this sounds like a sensible idea. And DF-SS is one of those “I kind of wish they didn’t work to keep me sounding credible” devices that damn well ends up doing good. I mean, by the standards of the ‘self-appointed keepers of the hard science’ end of audio, the idea that power cords make a justifiable difference is nonsense, so placing said power cord on cable risers is about as close as it gets to literal nonsense on stilts. I guess me saying they further focus that already focused sound of QR-5 enough to justify their inclusion probably makes me the Mad Hatter. More tea, anyone?

Although there are those who insist on the top of the tree no matter what, in reality, Omega QR-s is the top of the Shunyata tree for everything except Class AB power amps delivering more than about 200 watts per channel. If you are bringing some really heavy amplifier firepower to your listening room, then Omega QR has the extra fortitude you might need. For everything else, QR-s is probably your best bet.