Rega published a book last year, an autobiography of sorts that charts the oft challenging history of the company and its products; they called the book A Vibration Measuring Machine (reviewed inHi-Fi+ Issue 149).This tells you a lot about Rega’s approach to designing turntables, one where the aim is to extract maximum detail from the vinyl groove with the minimum of distortion being introduced by the ‘measuring’ process. While most other turntable makers appear to base their designs on what went before, Rega pioneers new technologies and techniques, and as a result makes some of the best turntables available at their given price points. In fact, few turntables equal the Rega RP10 in my opinion.

Having achieved turntable nirvana, Rega realised that it needed a cartridge that was good enough to let people hear what its turntables could do. Rega’s approach to developing a serious moving coil cartridge has been as unique as anything that has been done for the turntables. The vast majority of MCs have a tie-wire that secures the back end of the stylus to the body of the cartridge and this fixing can be adjusted to tune the characteristics of the transducer. In the Apheta 2, Rega created an MC without a tie-wire so it could be produced without the need for hand tuning, thus creating a cartridge with greater consistency of character than usual. They did this by designing a rhomboid pivot pad suspension with butyl rubber that has a molecular migration characteristic, in other words, it bonds to the cantilever and the cartridge body over time without the need for any adhesive. It’s pretty clever stuff even by the standards of moving coil design.

The body is machined from aluminium to very high precision and houses an ‘ultra-low mass’ generator, that is the iron cross that supports the coils. This is considerably smaller than usual and the signal is generated by a neodymium magnet system, which itself is very compact indeed. You can see as much by looking closely because the cover is transparent polycarbonate, which keeps dust out and protects the fragile wiring without adding mass. The Aphelion is differentiated from the Apheta 2 by its cantilever and stylus; the former using a boron rod with a slot in the end that holds a vital profile diamond stylus. There is a loop in the Aphelion body to protect the stylus from knocks, which adds mass and potential for resonance but replacing the stylus is always going to be a pricey procedure on a cartridge like this, so it’s a compromise worth making.

The Aphelion is unusual in the Rega range in having some luxury lavished on its presentation. It’s supplied in a machined aluminium case and comes with a torque wrench designed and made for Rega cartridges. This ensures that all three of the mounting bolts have the same torque and thus do not put the cartridge body under stress that could effect its high precision construction. Three mounting points ensure a solid fixing to Rega headshells, but with other arms you are limited to the usual two, which was how I started using it in an SME V arm on a Model 20/3 turntable. A Tom Evans Groove+ SRX MkII provided phono amplification and EQ duties and had its loading set to the 100 Ohms impedance recommended by Rega. This combination allowed the Apheta to go about resolving vast swathes of fine and coarse detail, which meant that the characteristics of the records played came through loud, clear, and relaxed. The bass for instance reflects both the solidity of the SME turntable and the timbre of the drums and guitars producing it. On ‘The Wardrobe Master of Paradise’ [Conjure, Music for the Texts of Ishmael Reed, American Clavé] there is a good variety of percussion instruments, particularly hand beaten drums, which the Aphelion was able to clearly differentiate while allowing Taj Mahal’s singing to retain oodles of character. The imaging was positively holographic, especially when the sax player came in and you could hear his intonation and technique while simultaneously getting wrapped up in the song. On another tune from the same album, ‘Oakland Blues’, Olu Dara’s trumpet playing takes centre stage and sounds so inspired that this just had to be a live, improvised session. 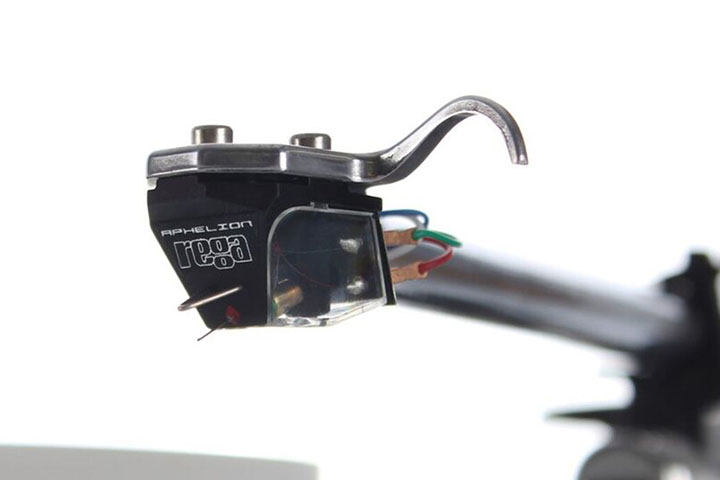 For a change of style I put on ‘Dancing with the Moonlight Knight’ [Selling England by the Pound, Genesis, Charisma] where it was easy to distinguish every note and nuance of the playing, not to mention the dynamics which were positively astonishing. The Aphelion was however designed with considerably lower mass turntables in mind so I swapped it onto a Rega RP10 and put Tom Waits’ Swordfishtrombones[Island] under the stylus, which resulted in all of the above plus solid gone, on it, kick ass timing, and even more of the character of the recording. The acoustic nature of the studio and effects, the interplay between musicians and the full space and depth of reverb became clear as day. A proper 3D, 10K experience without goggles or speakers in the ceiling! The home cinema world has a long way to go before it creates a sense of realism like this, if it ever will; shutting the eyes helps with suspension of disbelief.

The RP10/Aphelion combination produces the most lifelike results I have encountered with vinyl, and if there is vitality in the music you will hear all of it with this record player (phono stage allowing). The Marty Paitch Big Band’s The New York Scene[Discovery] features Art Pepper and Victor Feldman in tight formation creating a sense of tension that is just magic on the opening number. The recording gives a very different perspective on the various instruments, but the whole thing swings like nobody’s business.

The low mass of the Aphelion and its three hole fixing make it perfect for Rega turntables, but its qualities shine through elsewhere as my experience with the SME revealed. It’s speed, detail resolution, and neutrality are in the premier league but don’t expect something to warm up your record collection. This MC is designed to measure the bumps in the groove with maximum precision and deliver a signal that is a very accurate representation, so much so that you will find it hard to tear yourself away. If you want to hear the true nature of your record collection there are few better tools for the job.