Early in 2017 I took two opportunities to hear a very special audio system located in the large listening room at the GTT Audio facility in Long Valley, New Jersey, USA. The system was comprised of YG Acoustics’ flagship Sonja XV loudspeakers; an Audionet preamp, phono stage, and Planck CD player with appropriate outboard power supplies, plus a quartet of Audionet Max monoblock power amps; Kronos Audio’s Kronos Pro turntable and Black Beauty tonearm fitted with an Airtight phono cartridge; and a mix of Kubala-Sosna Elation and Realization cables. It was, hands down, the finest audio system I had ever heard up to that point so it goes without saying that it left an indelible impression upon me. Honestly, in every aspect of performance one might care to name, that remarkable YG/Audionet-based system set performance benchmarks that seemed very likely to stand the test of time—until now. 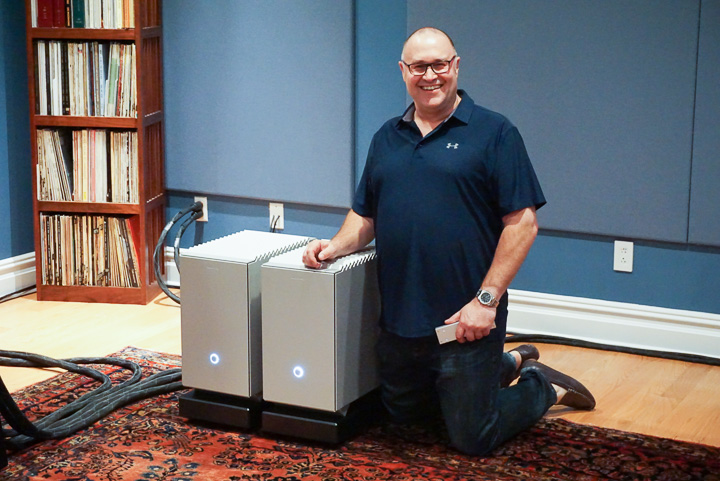 This fall, Bill Parish, the owner of GTT Audio, invited me to attend a roll-out event for Audionet’s new flagship Stern preamplifier ($45,000) and a quartet of the firm’s new flagship Heisenberg monoblock power amplifiers ($105,000/pair or $210,000 for the set). The event featured the exact same YG Sonja XV-based system I had heard before, but with the Stern and four Heisenberg amps replacing the Audionet Pre G2 and Max power amps that had previously powered the system, and with a full set of Kubala-Sosna Realization cables replacing the partial Realization loom that had originally been in place.

Coming in, Bill told me, “I think the Stern/Heisenberg combination takes the system to a whole new level of performance, but you be the judge.” I accepted Bill’s assessment at face value but also with—if I am candid—a fairly major grain of salt. Bill is, after all, the Audionet distributor for North America and it would only be natural for him to assess the firm’s latest and greatest offerings in a favourable light. Even so, the fact was that the system in its prior configuration (with the previous Audionet flagship components) had been the best I’d ever heard and by a not subtle margin. Realistically, how much better could it possibly get? 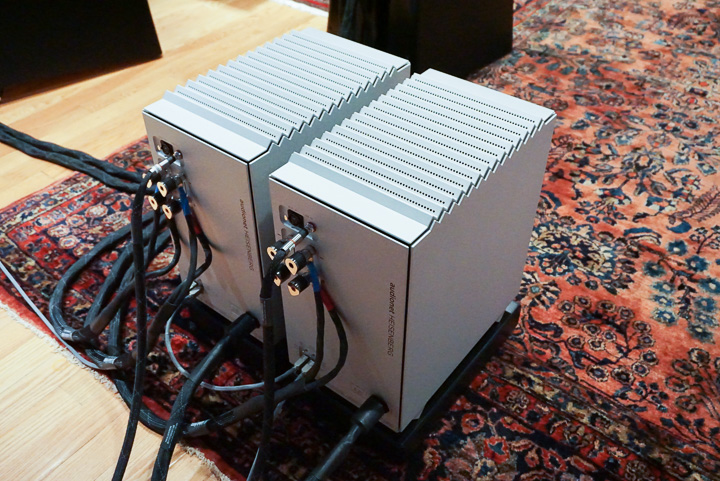 The answer, as it turns out, is that the system got quite a lot better and in ways that left me scrambling for suitable descriptors as I contemplated sketching out the sonic improvements I heard. What floored me was that the improvements weren’t the sort of things one had to concentrate or struggle to hear; on the contrary, they were so obvious that within just 20 or 30 minutes of listening it was plain as day that the Stern/Heisenberg electronics had shattered performance boundaries in a major, “there’s no turning back now” kind of way.  What changed? Many things. 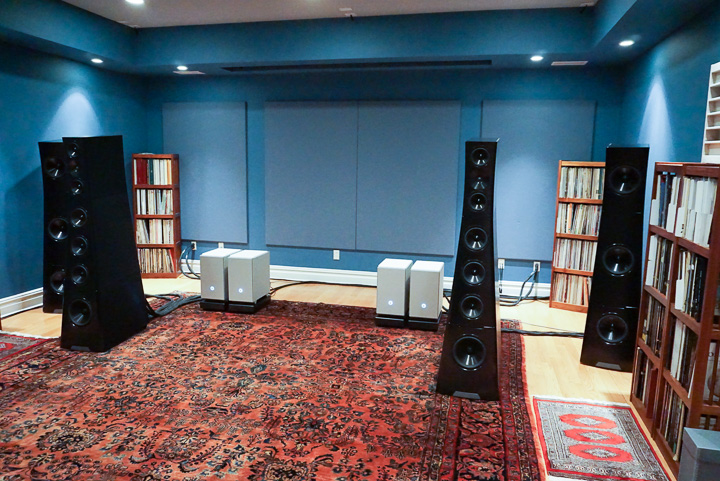 First, the overall system noise floor had gone way, way down (and it had been very low to begin with) and with it the amounts of low-level sonic information revealed were increased in a manner that was just plain breath taking. The musical implications of this change alone were highly significant in that low-level reverberant information was reproduced much more clearly, which in turn made the system sound far more three-dimensional than before (an area where the original system had been excellent, but where it now seemed markedly more expansive and realistic—especially on really good recordings). What is more, low-level textural, transient, and timbral details were rendered in a more complete and holistic way and with a heightened sense of focus and nuance. As a result, the voices of instruments and human singers became at once more natural sounding, more pure, and more focused. On massed choral pieces in particular it became much simpler to hear clearly the lyrics being sung and to follow them without needing a libretto in hand. The sheer effortless clarity I heard was unlike anything I had heard from any hi-fi system in the past, and as a result, large-scale choral and orchestral works took a quantum leap forward in overall intelligibility and lucidity.

Second, the bass qualities of the Stern/Heisenberg electronics ensemble proved astonishingly good. If you charted out all the various performance parameters that together make for great bass—depth and extension, grip and control, power and impact, transient speed and textural detail, and so forth—the Audionet electronics simply raised the stakes (across the board) in a way I had not really thought possible. Understand, please, that the original YG Sonja XV/Audionet Pre G2/Max system offered extremely impressive bass depth and focus in its own right, so that I was not really prepared to hear even more depth, more focus, and much more bass detail, yet that is exactly what the Stern/Heisenberg electronics delivered. 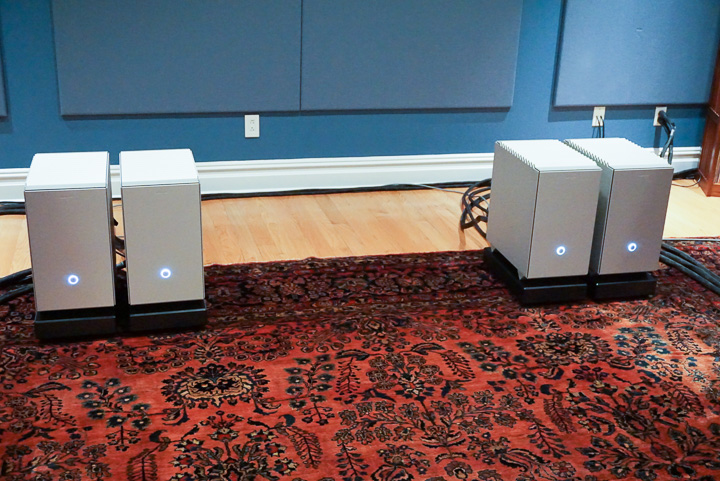 Third, (and perhaps this come as no surprise) the extremely powerful Heisenberg amplifiers (1,050 watts @ 4 ohms) gave the system a certain “ceilings unlimited” quality in terms of dynamics. No moment seemed too big or too complicated for the Stern/Heisenberg electronics to handle, so that when big orchestral swells arrived the system simply played them—at full song—and with not so much as a hint of distress. When you lift performance constraints from an already superb system, moments of sonic greatness can and do ensue. And lifting performance constraints is, at the end of the day, what Audionet’s Stern and Heisenberg are all about.

Now those raised in the ‘smaller-is-better’ ethos of hi-fi amplification might well wonder if blockbuster amps such as the Heisenbergs could be anything but muscle-bound, but that isn’t the case at all. In fact, I suspect the Heisenberg might just be the most fleet-footed and agile audio amplifier I’ve ever experienced–regardless of size, price, or circuit topology, which is saying a mouthful. As a consequence, one benefit is that, with the Audionet flagships in place, the listener isn’t really conscious of individual performance attributes in isolation, but rather experiences them as an interwoven, organic whole. The end result is, where recordings permit, a huge, panoramic presentation where the music leads a life of its own, as if set free from the boundaries of the room and the constraints (what constraints?) of the system.

Two major benefits of the Stern/Heisenberg package are these: first, the strengths of ancillary components seem greatly magnified by the Audionet electronics, and second, with the Audionet components in play recordings can be explored in much greater depth and with more insight than listeners might have thought possible. For example, with Stern and Heisenberg in play GTT Audio’s Kronos/Airtight analogue rig sounded far more nuanced and accomplished than it had with the earlier-generation Audionet electronics in the system. The same was true for the Audionet Planck CD player/DAC that served as the digital front-end for the system. Finally, the mighty YG Acoustics Sonja XV speakers themselves sounded even mightier—more nuanced, more revealing, more powerful, and more full of dynamic energy and life. 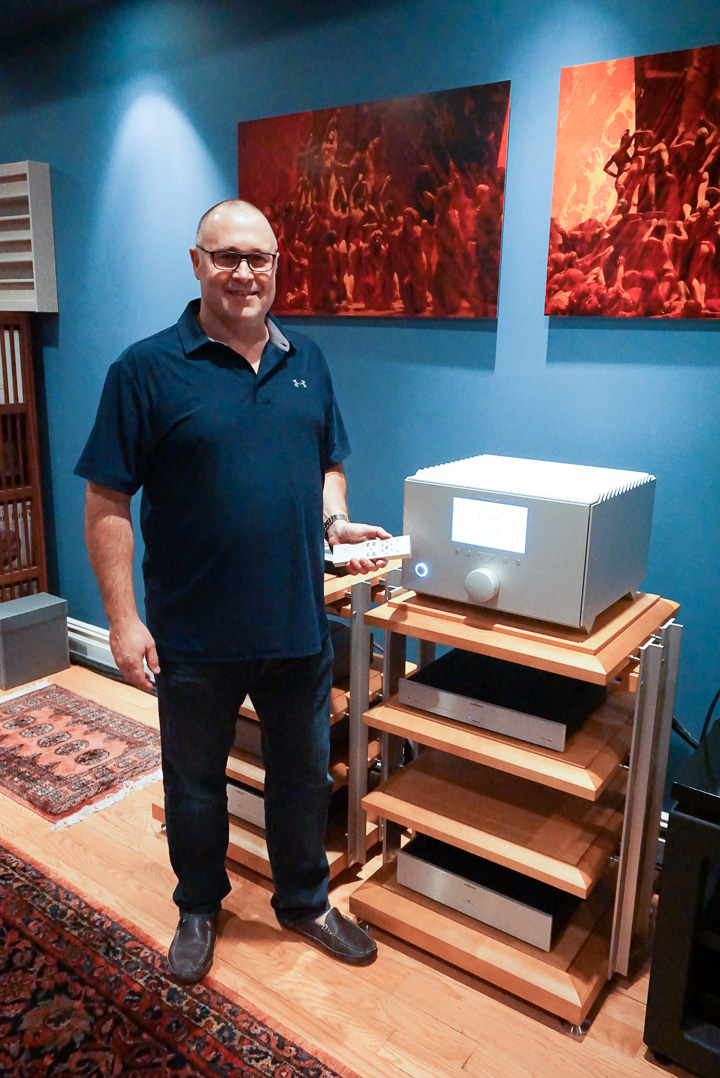 At one point during my listening session, Joe Kubala (of Kubala-Sosna fame), Bill Parish, and I decided to do a ‘listen-off’ to compare the concluding two passages of three recordings of Mahler’s Symphony No. 8 (the versions we compared were the Tilson Thomas/SFO version, the Kubelik/Bavarian Orchestra version, and the Solti/Chicago version). As we listened, the system became for us a wise music mentor, letting us hear and grasp in great detail (and I am speaking of both intellectual and emotional detail) the different decisions and performance choices the conductors, orchestras, vocal soloists, and choirs had made. When the comparison was finished, I found myself almost overwhelmed by a sense both of enlightenment (inasmuch as I knew more about the performances than I had before the session began) and of deep, almost-on-the-verge-of-tears emotional engagement. (For me, as for so many others, there is nothing quite like the conclusion of Mahler’s 8th to stir the soul, and the Stern/Heisenberg combination amp elevated that listening experience to the level of—how shall I put this? —the musical equivalent of Close Encounters of the Third Kind).

As you might expect, Stern and Heisenberg both offer exemplary performance specifications and incredibly beautiful industrial designs. Key performance metrics for the Stern include:

Performance metrics for the Heisenberg include:

Hartmut Esslinger, founder of Frogdesign and creator of the designs for several of Apple’s most iconic products, personally developed the striking industrial designs for both Stern and Heisenberg. The look of both components is visually striking and highly thought-provoking, thanks in part to a patented design technique that gives the illusion that the side and top panels of the preamp and amplifier chassis ‘float’ in close proximity to one another, but without actually touching! Both designs combine rectilinear shapes with ridged cooling vents that are triangular in cross section, as are the support bars that serve as the ‘feet’ of the components.  In case you’re wondering, I’m not the only one who finds these components beautiful; in fact, the Stern is now on display as part of the Smithsonian’s National Gallery. Both the Stern and Heisenberg are offered in two colours (silver and black) and in two chassis formats (vertical and horizontal). Candidly, the vertical models have (to my eyes) a more striking visual presence, but the horizontal models are much easier to place on typical audio racks, so that simple pragmatism way wind up carrying the day for many prospective buyers. 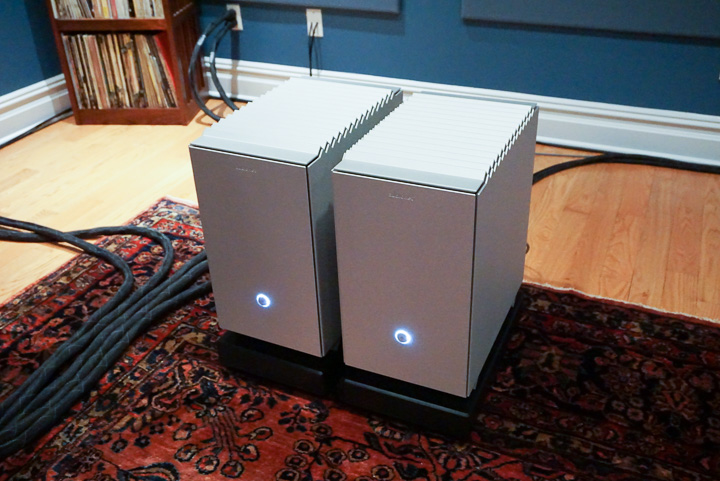 The bottom line is that Stern and Heisenberg have, in my opinion, raised the performance bar for high-end audio electronics, and I say this having heard top-tier components from Audio Research, Constellation, Dan D’Agostino Master Audio Systems, Naim Audio, Pass Labs, Soulution, and others). They also serve admirably as audio objets d’arts that are, in a very literal sense, of museum quality. Therefore, I would encourage listeners to go hear and see the Audionet components, if only for a glimpse of what’s possible when performance constraints are removed.

For more information visit Audionet at www.en.audionet.de or GTT Audio & Video at www.gttaudio.com.