The Questyle QP2R (reviewed in Hi-Fi+issue 154) is one of our most valued DAPs (digital audio player) we’ve ever tested. It’s the real deal, covering virtually all the bases in terms of formats, has outstanding on-board DACs and amps, and makes extremely good sense as for the audiophile on the move. But, what if you want more? That’s when the HB2 hub kicks in.

Before we go further, however, some personal back story is in order. The Editor and I are from more or less the same part of London and have largely lost those strong ‘Norf Lunduhn’ accents. Except when things get ‘proper naughty’, such as during the exchange between Alan Sircom and me about writing almost 1,500 words on a dock, which ended up sounding a bit Guy Richie. Fortunately, a rough translation will be provided:

Trans: “Are you making fun of me? I can write 500 words on a dock without difficulty, but 1,400 words might prove a stretch. You have lost your mind!”

Trans:“Keep Calm and Carry On, my friend. Try the QP2R/HB2 combination for yourself and you’ll find those extra 1,000 words very quickly.”

He was right. Because what is, intellectually speaking, a docking station for a high-end DAP can work as an extremely fine digital front-end for desktop and full-sized systems in its own right. Well, almost: in a full-sized system where the electronics might be half a room away from the listener, trying to navigate a music collection through the QP2R’s screen is going to be somewhatfrustrating, but used closer to eyes, the QP2R/HB2 makes a very cogent case for doing without any kind of computer, server, or disc-based source. And when that listening is done, you have an absolute top-notch portable audio source with all your music pre-loaded, ready and waiting. 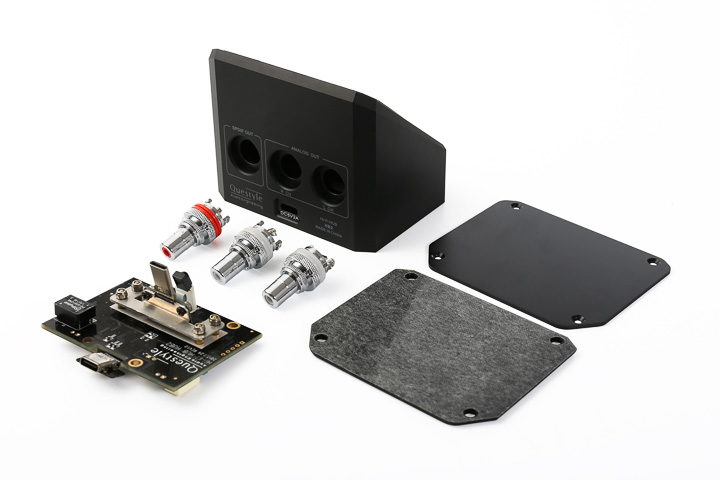 A quick recap of the QP2R is in order, of course. The black and gold or black and gunmetal player is Questyle Audio’s response to just criticism of its first DAP, the QP1R. It lost a micro SD port in the upgrade, but got more power (an all-discrete, fully balanced, pure Class A current mode amplifier that delivers both single-ended and balanced headphone outputs), more processing power (it uses an AKM AK4490 DAC chip), more formats (PCM files to 384kHz sampling rates  and up to 32-bit word depths; DSD files at DSD64, DSD128, or DSD256 resolution levels, with DSD64 performed natively), and much improved haptics (a far more responsive multi-controller navigational wheel). All wrapped in a CNC-milled chassis and hard-as-nails Gorilla Glass. In today’s everything-on-your-smartphone world, the Questyle is one of the few designs that truly makes a valid case for a standalone portable player, both in terms of outstanding build and extremely high performance.

It’s joined by the HB2, the actual subject of this test. The HB2 is deceptively simple, as it has just a coaxial S/PDIF digital output, a pair of RCA analogue line outputs and both a 5V input and a charging/docking connector for the QP2R. This bi-directional connection only works one way at a time; in other words, it won’t charge and play at the same time. Questyle says this is because doing both undermines sound quality, and – absent a way of testing this without having to send the dock and player back in pieces – we’ll have to take that at face value. There is also a useful remote control that drives the docked QP2R.

The HB2 addresses one of the most obvious limitations of a portable player – what do you do with it when it’s not in your pocket? In fact, the quality of the pair invites a bigger question. The high-performance output of a dedicated device like the QP2R through its dock is not shared by the quality of the computer that routinely feeds it unless you factor in a very high-spec DAC in and of itself. Even then, there are those who claim that putting a computer in your audio system – with its noisy, made for peanuts, switch-mode power supply polluting the AC – undermines the sound of the complete system. Which means that audiophiles wanting post-CD sound in the home and on the move face a dilemma; finding a way of getting the best of both without either compromise or significantly increased hassle. Uploading a file or ripping a disc to a server and a DAP should be straightforward, but is often a multi-stage, ad hocprocess involving the computer as a kind of intermediary. By way of contrast, using the QP2R as portable and domestic source standardises the process. The files are stored on your computer, transferred to the QP2R’s on-board or micro SD storage, and that’s it. Your computer is kept at arm’s length from the system but is used as the repository for all things music. The music you play is on the DAP.

Granted, this concept is not without its issues, especially as it means randomly browsing through your music is performed at one remove from the system, but sonically it makes a lot of sense.

Of course, it only makes sense if the player and the dock live up to the hype. The QP2R is on safe ground here – it has already demonstrated its quality in headphone-based listening tests, as far as DAPs go, it’s one of the good guys. OK, so it doesn’t give bad recordings a soft landing, but it is unflappably resolving, dynamic, and muscular sounding when the recording allows it to shine. And shine it does! There’s a sense of authority and control to the sound, yet not at the expense of the filigree details, or even the rhythmic properties of a recording. The old British obsession with PRaT (Pace, Rhythm, and Timing) is often sidelined in DAP devices, as they seem to accent detail and separation over beat, but the QP2R is a rare and welcome exception, producing a cogent and coherent sense of rhythm underpinning the melodic themes of the music. 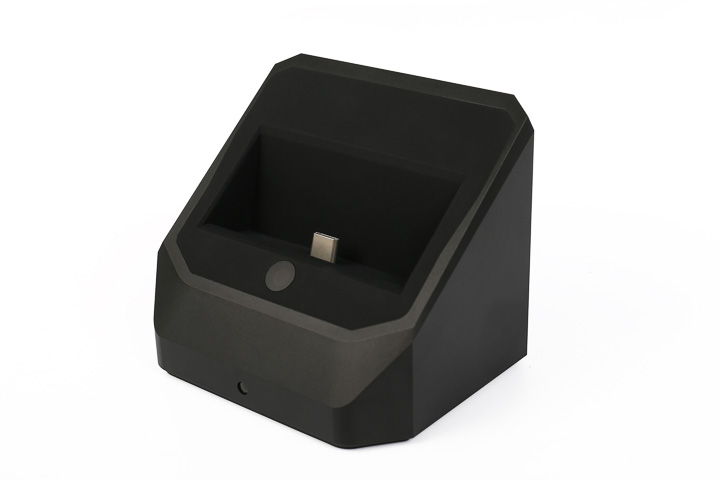 That is important in a portable audio context, and absolutely vital in a docked environment. The arguably more visceral bass of cone drive units in a room – or possibly the mass of those cones relative to typical headphone diaphragms – seems to make that rhythmic performance all the more vital. I know that most people seem to equate that timing information with a 4/4 rock beat, but I find it becomes most noticeable with Schoenberg’s Verklärte Nacht[von Karajan, DG], where his seminal early tone-poem carves a delicate meter. This is easily disrupted (through both sins of omission and commission) and the QP2R’s performance is welcomed.

That’s the key thing about the combination of QP2R and HB2; the former is an excellent deliverer of music, and the HB2 doesn’t get in the way of that. The authoritative grip the QP2R has on headphones (thanks to that current mode amplification) applies just as equally to driving line stages through the HB2. It’s inherently clean, detailed, and extended top-to-bottom. If there is a criticism here, it’s directed perhaps as much at rival products as at the QP2R/HB2 combination; the duo delivers what is supposed to be an optimum line level voltage load, but many of today’s DACs and players ‘sex up’ the output. In real terms, this makes the QP2R/HB2 more dynamic than its rivals, but slightly less loud at a given volume level. Not a big issue, and if you are the least bit mature about audio, you would see this as a positive, but decades of loudness war propaganda demonstrates that louder sells.

The S/PDIF output is equally honest in nature. By avoiding the amps altogether, it gives a glimpse into what the raw QP2R delivers, and that is an extremely detailed and precise (those words again) sound. In absolute terms, the digital output seems entirely comfortable with any kind of DAC input, such is its accuracy, although the overall sound seems to be less rhythmically commanding than the QP2R and its analogue outputs.

What both analogue and digital outputs show, though, is the QP2R’s excellent soundstaging properties, which sometimes get overlooked in the personal audio space. The duo presents an image that projects slightly forward of the loudspeakers and is both wider and deeper than the norm, with excellent image solidity within that soundstage. Sonically, this puts the QP2R/HB2 on a par with good players and streamers in the £3,000-£5,000 class, but for £1,599. OK, so you can’t see the display across the room, but neither can you take your streamer on an aircraft! 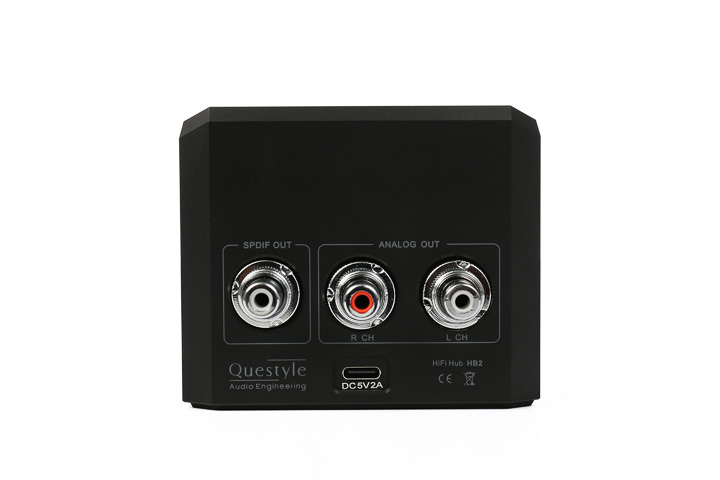 Aside from the name (the DAP sounds too much like ‘QPR’ and Spurs supporter are not big fans of Queen’s Park Rangers) there’s not much to dislike about this combination that wasn’t already noted in the review of the QP2R in Issue 154, and that was a rave. OK, personally, I’d love wireless connectivity and possibly access to Tidal or Qobuz in the home, but I really wouldn’t lose that much sleep over their omission because it’s the sound quality that really wins you over here. Slipping back into Guy Richie speak, this’ll put a smile on yer boat!