Two years ago PS Audio made a bold statement in the DAC world with the release of the universally hailed and much awarded DirectStream DSD DAC. The DirectStream converts all inputs to one-bit DSD and then up converts to 10X DSD before finishing the conversion at Double DSD or DSD128. The DirectStream is the brainchild of engineer Ted Smith and utilizes the Spartan 6 FPGA (Field Programmable Gate Array) rather than commercial DAC chips. As is often the case in the world of audio, groundbreaking is both exciting and pricey.

Cost conscious consumers wondered if a more affordable unit would ever surface. The answer to that question is a resounding Yes! 2016 saw the introduction of the DirectStream Jr (DSJ) DSD DAC. The DSJ incorporates the same Spartan 6 FPGA approach as its more expensive big brother in a smaller, less costly package. Differences between units include the touchscreen being replaced by an OLED display with a haptic feedback volume control. The chassis itself is also a less expensive to produce. The DSJ has a single power transformer eschewing the additional audio output transformer. The DSJ remains a full featured Pre-amp like its big brother. The RCA and XLR outputs allow it to connect directly to an external amplifier for a two channel system. One final significant touch was the inclusion of the Ethernet bridge within the unit rather than offering the bridge as an extra cost add-on board as with the DirectStream. The end result is a striking industrial design with exceptional audio chops at a more than 40% discount to its fully loaded big brother.

Speaking of the Ethernet bridge, the DSJ allows you to source files from anywhere within your home local network or stream via TIDAL. This is especially useful when using Roon to curate your music. The DSJ is fully Roon capable now and with it, the transition between file types or resolutions is immediate and free from any noticeable delay or drama. Songs simply play from one to another regardless of whether they are local or online, FLAC or mp3, 16/44.1 or 24/192, DSD64 or DSD128. They all get treated to the same up-conversion and the results are terrific, pure double DSD in fully balanced analogue glory.

All this keeps getting better and better, but what most excites the more frugal high-end audiophile is the DSJ also allows for routine software updates that continue to refine the sonic signature via free downloads. Yes, you can reprogram the FPGA over time to stay current with the best programming available from PS Audio as well as to improve future functionality, such as the most recent addition of a Roon endpoint. Why is this my favorite aspect of the DSJ? Because of all the audio components we can choose from DAC’s are the single most likely to be outdated the fastest. Fancy cutting edge units are old school tech in a year or two. A solid amplifier or preamp can be spectacular for a decade or more,  but DAC’s… not so much. With the DirectStream and now with the DSJ, I can invest with some fiscal confidence that my envy-inducing unit will not be a future low value for sale item. When the DSJ arrived at my home it did not have Roon. A week later I get an e-mail to upgrade the firmware. Voila! Roon as well as even better sound quality after a brief five-minute reprogram. Peace of mind along with great audio!

What has struck me sonically about the DSJ and its fully balanced analog output is that regardless of what type I file I queue up I get an almost identical superior sound from my system. After listening to a variety of music while burning in the unit, I began to become aware that it did not seem to matter what I played; certain things that I had just accepted would be part of digital playback were no longer there. Edginess seemed to go away. Harshness was noticeably reduced. Intriguing. I began to seek out comparisons to see if I was actually hearing (or not hearing) what I thought I was. 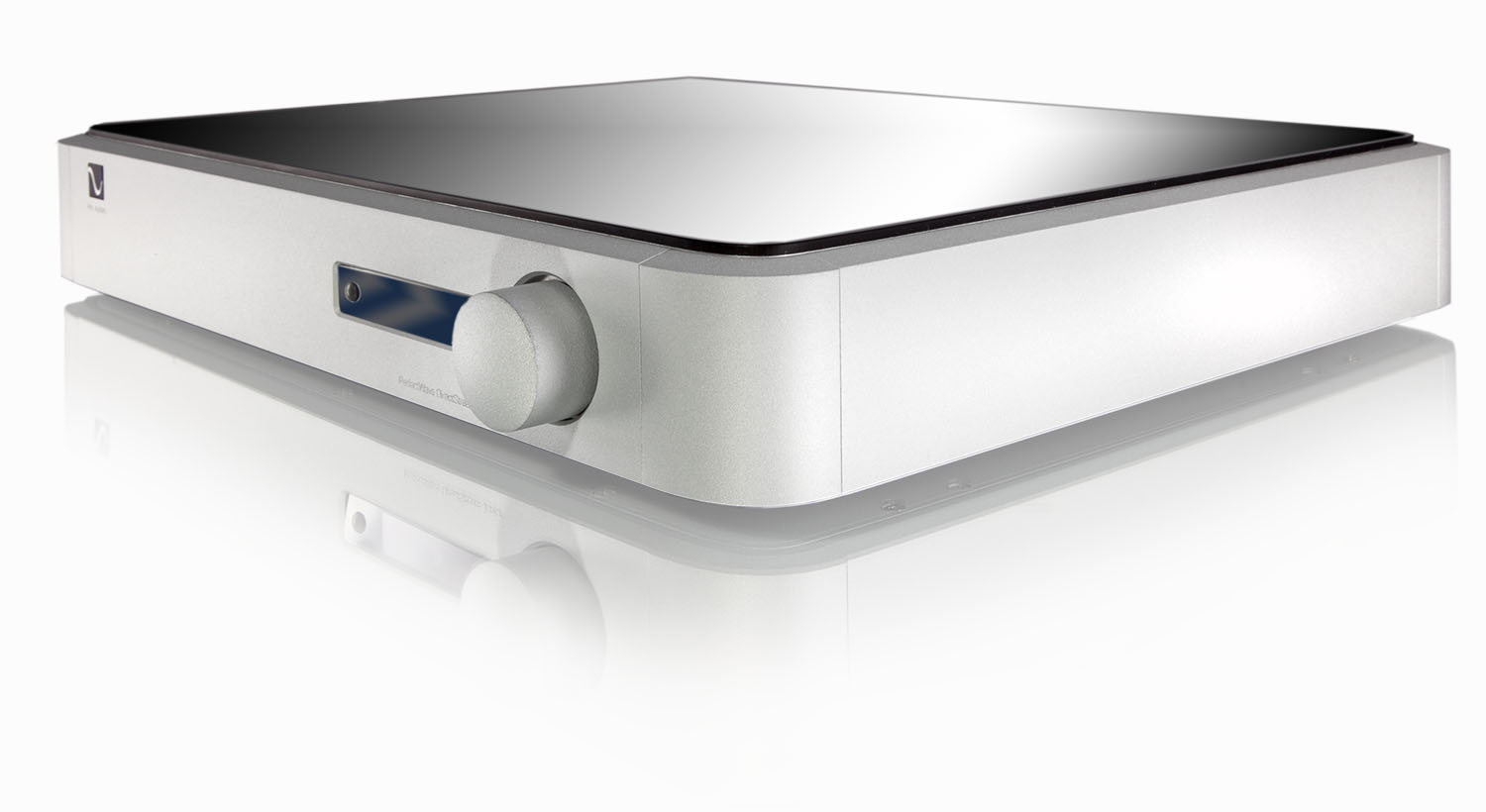 One example was the ubiquitous audiophile album, Just a Little Lovin by Shelby Lynne [Lost Highway Records]. I listened first to the iTunes 16/44.1 download. Generally, when played on a DAC constructed using the ‘usual suspect’ chips there would be a noticeable edge that was present particularly on the drum kit. The shimmer of the high hat would have a harshness that reduced the sonics from the desired “off to forever” to a more mundane limited space. Shelby’s voice would not have that purity which makes female vocals so marvelous. Upon starting the iTunes file, I sat back and after a few seconds I was wondering if I had clicked on the DSD64 file. Indeed, it was the low res mp3 playing. Remarkable! I let the song finish and then played the DSD64 file. The files were nearly indistinguishable. For the first time I had actually enjoyed the lower-res version without accepting the previously inevitable sound quality compromises. At this point a real acid test was called for. I put the 200gm vinyl LP version on the turntable and sat back. The sonic signature was astonishingly close to the output from the DSJ! The differences I would call more variations of character rather than digital vs analogue – similar to changing phono cartridges rather than CD vs vinyl. How long have we been waiting for this? What had we paid for a DAC to come to this level prior to the DSJ? Truly a lower cost watershed moment for my library of digitised audio.

Looking through the library, I began to seek out a previous problem child. Men at Work’s Business as Usual was released in late 1981 and I bought the CD [CBS/Columbia] in 1983. ‘Who Can it be Now’ was a top hit that I still enjoy today. The CD version, however, was harsh at best. The tenor saxophone was very susceptible to excessive grain and even some ringing, not the wonderful bell-like reed-through-metal-rasp that so personifies that instrument. I first played the CD and was reintroduced to a favorite song presented in its remembered unfortunate guise. Then I played the CD rip via the DSJ. It was a noticeable improvement. I doubt short of the master tapes you could receive perfection, (something about lipstick on a pig?) However, it was the best quality of presentation I had ever heard of an old favourite. The sax was significantly smoother. Much less rasp and blat. Edging was appropriately reduced and the ring was moved much closer to the bell like tone of a live performance.

Digital has always, for me, had a detrimental impact on music that had many layered parts. The compression artifacts limited the spatial effects intended by the artists. Clannad’s Banba [RCA] utilises the layering process to great effect. On one song, ‘Na Laethe Bhi’, the layering creates the impression of dozens of voices in the chorus. Generally, the track has always seemed to be artificially enclosed as if the singers were in a smaller space than could fit the perceived number of people. They sounded almost crushed together. With the DSJ it was like the room had expanded. The scale increased markedly and the song had room to breathe. The effect was quite extraordinary and gave me the impression I was hearing the song as intended for the first time. Moya Brenna’s haunting vocals occupied a much vaster area centered among the accompanying chorus that seemed as wide as the sky. Imaging became spot on and the soundstage took on a depth and breadth I had not experienced previously. Chimes had room to float among the singers, strings had room to play! Thank you DSJ for giving this song back to me.

At £3,700 (with an included 1 year Roon trial subscription included) this is not an inexpensive piece of kit. However, the few units I have heard that can reach the analogue heights achieved by the DSJ have been either its bigger DirectStream brother or a handful of other products all coming in at several times the price. Nothing I have heard at this price point thus far has had the word ‘Analogue’ floating in my ears from the start of listening. Enthusiastically recommended.

I2S Format: PCM or DSD. DoP on all inputs as well as DSD on I2S inputs

Controls: a single button with multi touch menu access. One knob to control volume and move throughout the menu system.

Distributed in the UK by: Signature Systems