Let’s be brutally honest about high-end audio; sometimes it’s a bit full of itself. The combination of ever-soaring prices and elaborate and often exaggerated claims can sometimes make even the most enthusiastic supporter of high-end audio shout ‘Stop The Insanity!’. Fortunately, there are a few brands that seem to share the desire to create products that perform well without recourse to making outlandish claims or creating eye-watering price tags. PrimaLuna is one such brand.

However, as a consequence to this BS-free approach to product design and manufacture, the products didn’t change that often. The ProLogue and DiaLogue models from the brand were mainstays of affordable valve-based high-end audio for some time, and the company didn’t run through endless cycles of hyped-up micro-changes in product design. This isn’t just ‘if it ain’t broke, don’t fix it’, but a more honest approach that admitted at first principles that there are only a finite number of ways of making an amplifier circuit, and few people are legitimately reinventing the wheel every few years; more like, tinkering with a circuit design that’s old enough to draw a pension.

So, when PrimaLuna announced a whole new range replacing the ProLogue and DiaLogue, interest was piqued. Was the company bowing to pressure and simply changing a couple of component values and proclaiming it the Second Coming of the Tube Amp, or will the Evolution range really live up to the name? The range launched recently with four series, each comprising integrated amp, line preamp, and stereo power amp that turns mono literally at the flick of a switch. These are, respectively, the Evo 100, 200, 300, and 400 series. There is also a single DAC in the range; the Evo 100. This sports a clever tube clock circuit, but that’s another story! 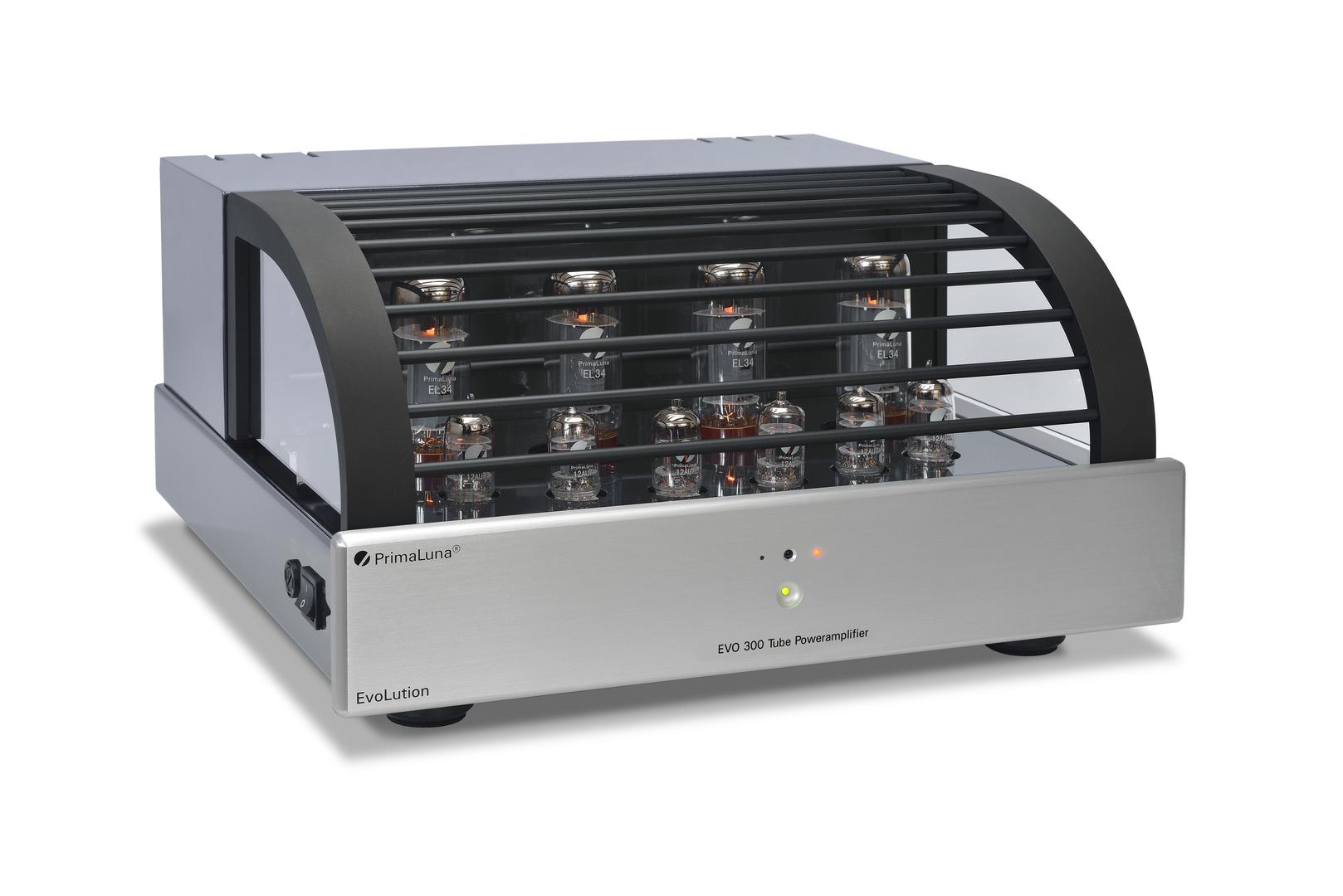 Even though we picked the Evo 300 preamp and stereo power amp, it’s worth running through the range, to set them in context. Evo 100 is the entry point, but already it features point-to-point wiring, relay-switched ‘super-quiet’ inputs, is a dual mono, valve regulated design with the company’s adaptive auto bias circuit and ‘Bad Tube Indicator’, has ALPS Blue Velvet potentiometers as volume controls in the preamp and integrated, and the integrated and power amp allow a degree of tube-rolling if the stock quartet of EL34s aren’t your bag. The Evo 200 adds a home cinema bypass, larger transformers, and the option to include KT150s in your tube-rolling quest. Evo 300 tested here adds a special ‘AC Offset Killer’ circuit that reduces transformer self-noise, upgrades the internal wiring to custom Swiss made cabling (in point-to-point designs, upgrading the internal wiring loom makes a huge difference), upgrading to Takman resistors and DuRoch tinfoil capacitors. The preamp and integrated get a bigger, better remote, and the power amp includes remotely-controlled triode/ultralinear switching, XLR inputs, and the beefiest transformers the company provides. Finally, the Evo 400 models bring XLR inputs to the preamplifier, and double the number of output valves, raising the power from a healthy 44W per channel in the Evo 300 amp tested here to 70W, or a potential 140W if used in bridged mono mode.

I have torn through these specifications because they speak of a range that works in a wholly sensible manner. Again, unlike many components in audio, where the notion of good-better-best seem separated by the thinnest sliver of difference, these are tangible improvements in specification that are likely to have tangible benefits in performance. This is why there are no built-in phono stages or on-board DACs; they rarely provide an improvement over even very affordable aftermarket models, and frequently do little more than increase cost and (in the case of poorly shielded DACs) lower overall performance. That being said, PrimaLuna did make the PhonoLogue and PhonoLogue Premium phono stages upgrades a few years back, so they can’t be that bad! Hopefully, however, this dismissal of the internal phono stage means a standalone Evo phono preamp or two is on the cards.

On to the specifics of the Evo 300 duo. The first observation is how the Evo 300 preamp is surprisingly weighty and bristles with valves (six 12AU7 and a pair of 5AR4 for the regulator). This weight comes down to a lot of transformers (because of that dual-mono, choke-filtered valve regulation). This is one of the sweetest sounding, yet insightful and upbeat, preamplifiers you can get for anything like the money. This is a harmonically rich sounding preamplifier that stays just the right side of ‘warm’ to be enticing, but that avoids the risk of falling into sounding too warm and ultimately cuddly-sounding. Stereo imaging is first-rate, with a great deal of image depth, and dynamics are more on the effortless rather than exuberant side. Fine detail resolution and vocal articulation are handled well, too.

In a way, the sound quality of the power amp is harder to track because it so readily invites tube rolling. The sound of the amp with two brace of KT150s is going to be markedly different to the Evo 300 sporting a quartet of 7581As, as it will with the stock EL34s. But with the stock EL34s in place it sounds damn fine. I felt the sound is perhaps best with smaller loudspeakers and in pentode mode than with more full-range designs or in triode operation. There’s something intrinsically ‘earthy’ and ‘gutsy’ about the sound when partnered with good, small loudspeakers that doesn’t extend to the bottom octave or so (but, in fairness, this isn’t the kind of amplifier that will be used in combination with full-range skyscraper speakers, and in context, it works fine). Moreover, while that sound gets a little smoother, warmer, and has better stereo in triode mode, I prefer the more dynamic pentode operation. Your mileage may vary here, however.

However, it is in combination that the PrimaLuna Evo 300 duo shine. This isn’t magic synergy or tweaking the response of one to suit the other; more that the two are well-matched in performance terms and that comes across well. One of the more ‘stand out’ tracks from the listening session that highlighted this was ‘Shipbuilding’ by Elvis Costello [Punch The Clock, F-Beat]. Always deeply evocative, the track was focused in the room with Costello’s voice and Chet Baker’s trumpet is almost too painful to hear. Anything that stirs up that emotion works!

The usual criticisms of PrimaLuna will be rolled out with the Evo range: the fact they are built in Asia, and their ‘bling-free’ styling. But, here’s the thing; you can buy valve amps designed and built in America or Europe but they either cost more or feature a lesser specification for the money. Or, you can buy something with a higher specification and better performance for less money knowing it logged a long boat ride in its infancy. Or, you can buy something that looks like a million bucks that doesn’t sound as good. Pick any one of these. There is no underlying value judgment in that statement; you can do all three and the choice is yours. What’s harder to do is buy a product of this specification and performance at the price that looks expensive, no matter how many times you stamp your feet and wish the world was different. Also, although some find the look a bit basic, with the protector like the styling; think of it as a ‘singing bread bin’.

I haven’t heard the full new Evo range yet, but I can’t help feeling that this Evo 300 pre/power occupies the sweet spot in the range. Granted if you need more power the Evo 400 power amps (especially in mono form) are the logical choice, and if you need to put some distance between pre and power, then the Evo 400 preamp with either the Evo 300 or Evo 400 power amp, all running in balanced mode would be a more sensible option. But for many who are going to put less than five metres of wire between the two PrimaLuna products, and those who aren’t in the market for bigger, beefier power amps, I can’t help but think this is the perfect combination. That is based on a sample of precisely one product combination in the range, though… so maybe every PrimaLuna product is in that sweet spot!