For the vast majority of music lovers the rectilinear shape of a loudspeaker is what defines its purpose; a box with square corners and round drivers is a speaker. So when PMC launched the twenty series five years ago it was taking a gamble: would the more dedicated music enthusiasts, who seem to be a notoriously conservative bunch when it comes to design, go for a box that seems to be leaning backwards? The appearance of a twenty5 series would suggest they did and that the trapezoidal shape met with commercial success. But this is also a little confusing in marketing terms. When the twenty5 series was launched at the 2016 Munich High End show, I presumed that these models would replace the twenty series. But that’s not the case, nor do the two ranges share anything more than the fixings for the tweeter. Despite the similarity of shape and size they are completely different speakers. There are clues to this in the shiny metal highlights on the drivers and the fins in the transmission line vent, and even more so in the price list. The twenty5 series is distinctly more expensive.

The main difference between this latest range and all but one other model in the catalogue is the so-called Laminair vent. This was developed for PMC’s largest professional monitor the QB1-A, an active design with four 250mm bass drivers and frankly alarming fire power. Designer Olly Thomas worked in Formula One prior to joining the company and studied the effects of turbulence on air movement. Turbulence is as much a problem at the opening of a reflex port or, in this case, transmission line as it is when you are looking for ways to make a car go faster. This is most apparent with the QB1 because of the sheer fire power produced by four bass drivers; he discovered that by introducing vertical fins or ‘strakes’ into the mouth of the vent, turbulence was dramatically reduced, which means that air could flow more easily. PMC gives a figure of 60% for the reduction in turbulence and drag produced by Laminair,  so the question then becomes when will we see this technology introduced across the range? Sadly the answer isn’t ‘next week’ because it’s not just a matter of putting strakes in the vent of an existing model, as the whole bass system has to be redesigned. But given the results achieved with the twenty5.22, I’m looking forward to hearing what this will do for my fact.8s.

This is one reason for the new mid/bass driver on this range. For the first time PMC have adopted a woven glass-fibre material rather than paper for this task. This material was chosen in order to provide sufficient stiffness to cope with the higher pressures created by extra damping material in the line, it also allows for higher sound pressures, AKA higher volume. On the twenty5.22, this is a 165mm example of the breed with an inverted glass-fibre dust cap and a long-throw voice coil with a suspension system that provides excursion braking for the purpose of avoiding damage to the system if it’s pushed too hard. If you need that much level, I’d suggest a larger loudspeaker! The tweeter is a refinement of that found in the twenty series with the addition of a perforated grille designed for optimum dispersion. The crossover is built on thick glass fibre board with chunky copper tracks and a 1.8kHz crossover point. It sits behind an attractively shiny non-magnetic, stainless back panel that bears just a single pair of terminals. But they are lovely terminals: custom made in rhodium plated copper, they are a match for the best in the business. The reason given for the single pair is that it reduces signal path lengths, but what they don’t say is that the bridging plates provided with most bi-wire terminals are a serious compromise. Although bi-wiring can be advantageous in some systems, I always prefer one run of the best cables I can afford rather than two at half the price.

PMC makes a dedicated stand for the two bookshelf designs in this range, which also leans back and has two columns supporting top and bottom plates that are a sandwich of steel and damping compound to minimise ringing.

As far as I remember, I Blu-tacked the twenty5.22s to their stands and connected them to my ATC P1 power amplifier with the usual Townshend Isolda DCT speaker cable and then had what can only be described as a musical black out. The next thing I knew was that several hours had passed and I had listened to loads of tracks, pretty well all of them sounding more subtle, interesting, and attention grabbing than usual… and with no intoxicants to hand except tea. Now I know that tea can be pretty strong stuff, but it’s unusual to disappear down a worm hole of this depth with most affordable loudspeakers. Luckily I managed to scribble down a few notes, the gist of them being: How can you combine musicality and detail so effectively in a two-way standmount that even a hi-fi reviewer could afford? 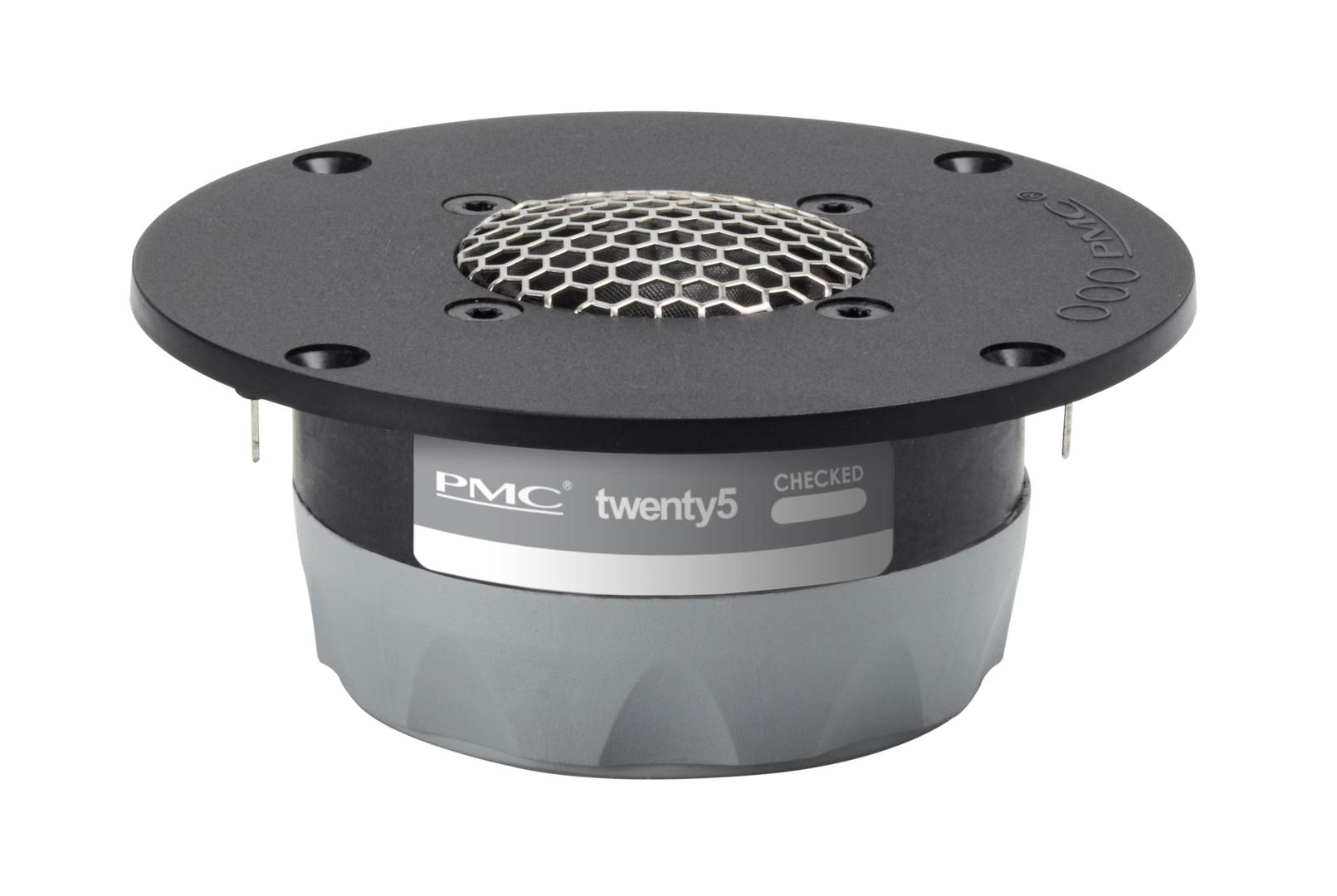 On the one hand, this PMC is uncannily relaxed. It seems to avoid the tendency to highlight shortcomings in recordings while at the same time pulling out all the fine detail. This seems impossible, but presumably relates to the reduction of distortion brought about by the Laminair system and its associated driver. PMC claims that the absence of turbulence at the vent mouth means detail isn’t masked to the same extent and I can only think that there is something in this. But on the other hand, what comes out of the port is only the lowest frequencies and the deepest bass notes, so how does that mean you can hear so much through the mid and top? And why does it make the speaker so effortless? Because that’s what I am hearing, less distortion and more information presented in a remarkably coherent and timely fashion.

Systems that ‘time’ well are often slightly forward in presentation, so it must be that leading edges are emphasised and these tend to be in the upper midrange. But the twenty5.22 times better than most and has an almost laid-back demeanour. It changes the rules and makes me want to hear a Laminaired fact8 even more.

Moving over to a more affordable and less powerful amplifier in the form of a Rega Elex-R resulted in a clear coarsening of the sound, meaning the limitations of what is always an enjoyable amp were rather more obvious than usual. This wasn’t a problem with all material, but pianos and saxophones sounded grainy with this combination. There was plenty of control in the bass so power wasn’t really an issue, but the twenty5.22 is a revealing loudspeaker and reflects what you drive it with as well as alternatives at rather higher prices. It projected sound well, unveiling the presence in different pieces and letting me know all about the electric atmosphere of a live Ryan Adams concert. The power of András Schiff’s playing [Beethoven – The Piano Sonatas, Vol. 7, ECM] is characterised by the transients that define when each note starts and the reverb that follows. This worked well with the Rega, delivering charm alongside the dynamics. It suited the metric precision of Haydn’s piano sonatas [Jean-Efflam Bavouzet,Piano Sonatas Vol 1, Chandos] better than the crystalline piano highs of Arvo Pärt’s beautiful ‘Spiegel Im Spiegel’ from Alina [ECM], the latter requiring a more refined source of power. But there was no problem at all with ZZ Top’s ‘Waitin’ For The Bus’ [Tres Hombres, Warner], where the reverb opened up the space and the guitar nailed it to the wall, so to speak.

Going back to my ATC power amp and Townshend pre made matters more revealing and allowed higher playback levels without discomfort. I’m not a headbanger, but PMC tells me that this speaker would be happy to oblige if the need for high SPLs were to arise. At low and ‘normal’ levels, however, this is a stonking loudspeaker. It has uncannily low distortion and remarkable transparency in the context of a very even, almost relaxed presentation that reflects what you send over the wires with consummate ease. Build quality is superb, and I had the reddish Amarone veneer which looks great alongside the brightwork and the lovely model badge on the back. Despite appearances, this is a significantly better loudspeaker than the twenty.22, which itself is pretty respectable, and I for one can’t wait to hear what Laminair can do for the bigger models in PMC’s extensive range.