There are a couple of fundamental problems with the Neat Acoustics Iota Alpha loudspeakers; they are small, and they are cute. Precisely why this is a problem becomes clear when you move them out of the room, and suddenly hear a peculiar whining noise from the upper regions of the Other Half. This whine gets a lot louder when wheeling in a pair of far larger loudspeakers.

The other problem with small and cute is it’s hard for audiophiles to take the Neat Acoustics Iota Alpha seriously. Unless it stands 2.5m tall and bristles with large drive units, so the logic goes, it’s not a ‘real’ loudspeaker. So a loudspeaker that comes up to your knees, and only has a small down-firing driver for the bass really doesn’t figure in the ‘audiophile approved’ handbook. But, in all this, there is an uncomfortable little plot twist for those ‘buy by the yard’ audiophiles – the Iota Alpha’s sound. 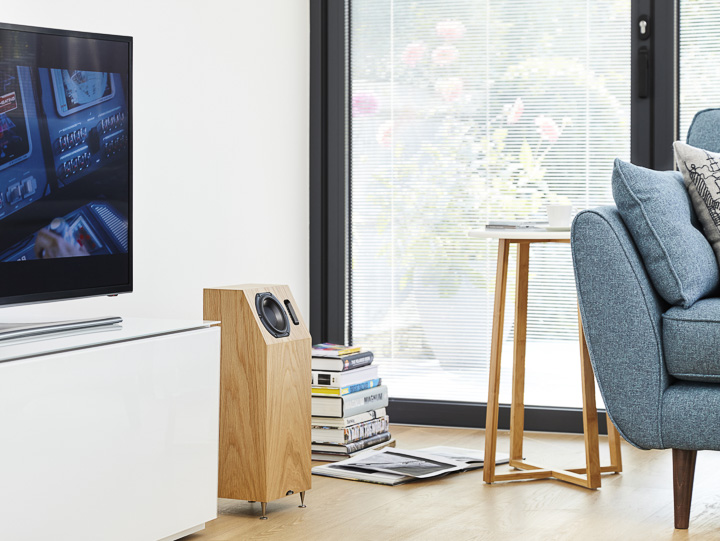 Sound is a big deal at Neat Acoustics. The company’s test procedures revolve largely around critical listening by keen musician and Neat founder Bob Surgeoner, and his small team, of which many are gigging musicians in their own right. The equipment is put to more objective testing, too, but principally the sound quality outweighs the objective testing in every step, the logic being that we still don’t know everything about how ‘ears’ and ‘meters’ correlate, and when you get a pair of loudspeakers home to listen, the ‘meters’ part becomes little more than an academic exercise.

The sound of the Neat Iota Alpha is largely dictated by the size of the cabinet and the drivers in that cabinet. That seems like a fairly prosaic statement (it’s like saying ‘the amount of people who can sleep in this house is largely dictated by the number of bedrooms’) but the Iota Alpha cabinet is so small, it’s worth reiterating slowly and carefully. If you have seen either the Iota Alpha (or its even smaller, older brother, the Iota) in the flesh, you’ll understand. It stands just 49cm tall on its spikes, is just 20cm wide and 16cm deep, and the front baffle is angled upward to fire the treble and midrange drivers to typical ear height. As with the original Iota, the tweeter is a planar magnetic EMIT design and the mid-woofer is a 100mm polypropylene cone driver. There’s also a down-firing 134mm treated paper cone bass unit (given the 160mm depth of the cabinet, that’s a tight fit, and putting your fingers under the cabinet for carrying purposes can end up pushing in the drive-unit, so be careful). There is a small rear-firing port mid-way along the rear of the cabinet, and a screw-in panel below houses a single pair of gold-plated 4mm speaker sockets and the simple, hard-wired crossover with a second-order network between treble and mid, and a first-order network between mid and bass. It’s all air-core inductors and Clarity capacitors in there, too.

Four tall spikes per side are included in the box. These are not the kind of armour-piercing designs you might find elsewhere, as they are more to raise the bass driver enough for it to bounce off the floor than to rigidly lock the speaker in place. Interestingly, given the driver to floor proximity, it didn’t seem too troubled as to whether there was wooden floor or carpet underneath, as long as the carpet wasn’t extremely thick or absorbent. Wooden floor seemed best, but the Iota Alpha isn’t fussy. Neither are they bothered about placement; a foot or so from the back wall gives the port breathing space, and the tweeter doesn’t have the widest lateral dispersion around, so having the speakers toed in slightly toward the listener helps. It’s worth noting the height of the speaker does make some obstructions between speaker and listener more sonically obvious. Low cabinets to the side walls or a large coffee table between you and the speakers seem a little more intrusive thanks to the low point of exit from the loudspeakers. 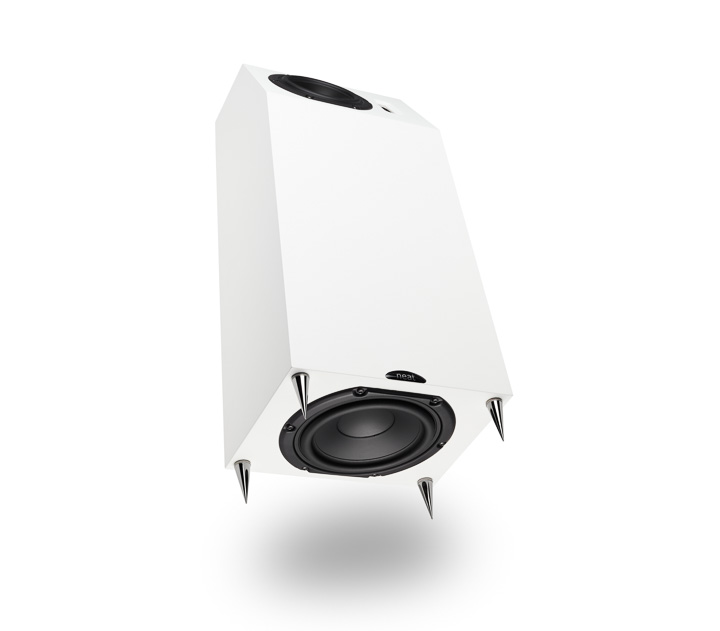 Despite their size, the Iota Alpha feel surprisingly solid in construction. Not heavy because Neat took the easy option of mass-loading the speakers (mass-loading would probably undermine the performance of a speaker this small anyway). Just solid.

There is a recommendation for a 200 hour run-in period for this loudspeaker and this is more important than most. That EMIT tweeter requires a lot of settling into its role, and the first few hours are a little bit of a musical rollercoaster of bad, good, bad again, then good and getting better. However, the first few hours are the most important and see the greatest change. After that, it’s a slow, steady improvement.

What the Neat Iota Alpha does brilliantly is cover its tracks. If you listen critically, and especially if you compare the Iota Alpha against its bigger, less cute rivals, the lack of very deep bass is relatively easy to hear. And if you try to play at thrash levels, the Iota Alpha is quick to complain. But, if you step away from the comparisons and play the loudspeakers as normal, non-party levels, it’s beguiling and infinitely entertaining. You are so swept up in the musical performance that these limitations simply fade into the background.

The sound is exceptionally coherent. There is an effortlessness to the midrange and treble that just draws you into the music, especially if that music has pure female vocals: I played ‘Because He Was a Bonnie Lad’ by The Unthanks [Here’s the Tender Coming, EMI] and Rachel and Becky Unthanks’ vocal harmonies are just beautiful, rising out of seemingly nowhere and filling the room. This is more than just folk for the 21st Century; it is music you fall in love with, and that’s easy to do here.

Perhaps in line with that coherence, the fast, fun sound with great rhythm and surprisingly deep bass gives that easy, unforced charm to virtually everything you throw at it. Contrapunctus 1 from Bach: The Art of Fugue by the Emerson Quartet [DG] gave a sense of musicians impassioned by the work of JS Bach, not ‘simply beautiful music well recorded’, but it was moving over to ‘La Grange’ by ZZ Top [Tres Hombres, London] that really showed what the little Iota Alpha is capable of. This is not a difficult groove, but it is one that surprisingly hard to get right: it either sounds impressive, yet a little bland, or upbeat and a little thin. The Iota Alpha managed to get closer to ‘impressive’ and ‘upbeat’, with plenty of dynamic range and energy, yet without the downsides becoming obvious in the process. Yes, you end up pushing it to its limits by virtue of wanting to play ZZ Top loud, but in a small room the Neat speaker is more than loud enough.

Describing the limitations of the Iota Alpha are fairly easy, and they are almost all entailed within the limitations imposed by the size. A loudspeaker that can be hidden from view by a relatively small potted plant is going to have potential line-of-sight issues, most of which can be overcome. Size also imposes limits of how much real volume and how much real deep bass is possible. All of which does tend to preselect the Iota Alpha for use in small rooms, with smaller, agile amplifiers. They don’t sound bass light in such a context and in UK rooms, the port simply seems to add the perception of bass depth. You probably won’t regret the lack of real deep bass, unless your music collection comprises mostly dub reggae and organ music.

Most of all, though, those limitations are more in the head of the listener than in the reality of what the Iota Alpha does. Forget ‘it has to be a toy loudspeaker’, and comparisons to the Stonehenge model in This is Spinal Tap; it’s a really good floorstander in a smaller box than usual. Get over it! 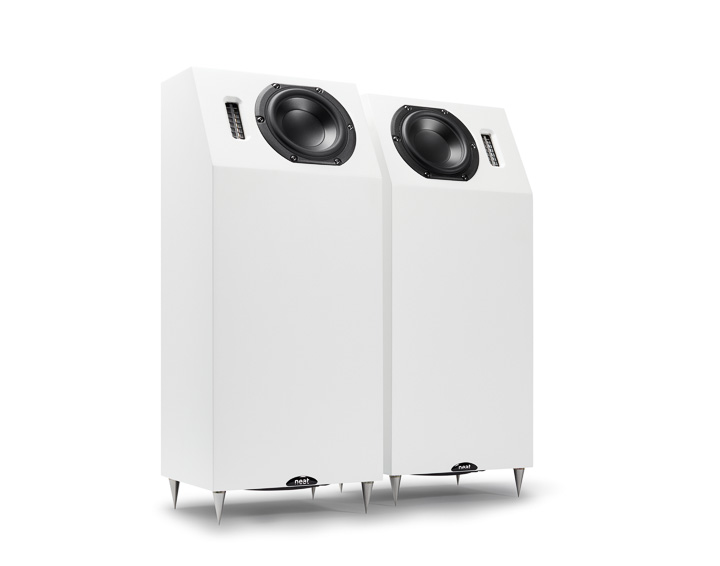 I have to say, I love what the Neat Iota Alpha does, in part for its ability to squeeze a quart into a pint pot, but mostly for its ability to challenge the dominance of big speakers. There is a ‘you have got to be kidding me!’ sense of shock that audiophiles get when hearing that much sound coming out of that small a box. And it’s a hugely enjoyable sound, too. If you have a small to mid-sized room, if you want big speaker sound without having big speakers, or if you just like taking on some of audio’s shibboleths, the Neat Acoustics Iota Alpha comes highly recommended.

More articles from this editor

Steve Dickinson looks at the latest CD player from Accuphase, and realises it had been a while since a CD player has been in his listening space.

Norma deserves more recognition than it gets, says Alan Sircom.

Jason Kennedy realises that Melco have significantly raised the bar with this Network Switch.