In case you may have missed it, Métronome Audio is French; calling its digital converter Le DAC is a bit of a clue. Also, in case you missed it, Métronome Audio is the more attainable sister brand to the cost-no-object Kalista digital range, all a part of the same Métronome Technologie company. Based out of Montans in southern France, the company’s products have garnered a fantastic reputation for sonic performance, but – in fairness – Métronome Audio is often overshadowed by its more up-market stablemate. This overshadowing is at once understandable, unfortunate and unfair, because taken in and of itself the Le DAC is a truly stellar digital converter.

The reason why Kalista understandably takes a lot of the limelight is down to the distinctive tripod look – all chrome and methacrylate – the attention-grabbing price-tag and the fact it sounds extremely organically musical. That commands respect from those who’ve heard Kalista… and draws angst from those who don’t need to experience something to be angry about it. Meanwhile, Métronome’s Le DAC has a more traditional look, a price tag that puts it in the ‘attainably priced’ level, and a performance that has the same easy to like performance envelope of the Kalista.

Métronome Audio itself has three lines in its own right: the ‘Digital Sharing’ range comprising DSc1 digital converter and DSs1 network player and streamer; the AQWO trio of CD/SACD player, CD/SACD transport and DAC, and Classica, which comprises the popular Le Player 2S CD player and the Le DAC tested here.

‘Classica’ might suggest a product line that had been collecting dust as new ranges eclipse it, but in fact the Le DAC has been in production since December 2018. In this case, ‘Classica’ is related to its product design brief, which has visual cues that hark back to the power supplies for the Kalista line and many of Métronome’s more classic products. It’s not simply some back-of-the-storeroom rehash or a product that has been in production for decades.

As the entry-level converter for Métronome, it still packs quite a digital punch, sporting an AK4493 decoder chip that allows for decoding of PCM files up to 32bit, 384kHz and DSD512. The DAC is well specified in terms of digital inputs (AES/EBU, twin optical and two coaxial S/PDIF connections and a USB type B input) and analogue outputs (RCA and XLR), but there are no digital outputs. There is also a central blue ‘fluro’ display with tiny toggle switches to move through the inputs. There are no fancy tweaks, elaborate filter options, no provisions for clocks. Just the basics.

The basics do not include the build quality. This is a very solidly built DAC. Sitting on three decent feet, the case feels well-constructed in part because Le DAC weighs in at a very un-DACcy 14kg. In fairness, some of this comes down to the use of a trio of torioidal transformers feeding some 10 independent power supplies. The universal use of toroids is uncommon in digital audio circles, with many brands preferring to use either switch-mode power supplies universally, or a hybrid of switch-mode for the digital side and toroidal transformers for the analogue stages. Métronome uses a similar analogue-style power supply feed for other products in the line-up, including the mighty Kalista range, so the brand is clearly onto something good here.

Perhaps that analogue power supply layout explains – at least in part – why when Métronome claims it strives to make digital sound like analogue. Métronome Technologie (both in the Métronome Audio and Kalista lines) has long been the experts of the digital balancing act; managing to make digital sound more like analogue audio without it sounding too dark and attenuated in the process. It’s not alone in going after this kind of performance, but many rivals go for either an artificially rolled-off treble in the filter stage or a softer sounding valve output stage. While there is nothing intrinsically wrong with either approach, Métronome manages to convey that easy, attractive, tonally rich and inherently musical sound that makes people like vinyl replay but without that arch ‘analoguey’ sound of a digital source trying too hard.

I predominantly used the DAC in between a Melco N10 and a Mark Levinson 5805, using both the amp’s RCA and XLR inputs to evaluate both ends of Le DAC’s performance. To explore more than USB output, I also used the S/PDIF output of a Naim Uniti Core, and even the Toslink output of a generic Sony Blu-ray player (sadly, testing AES/EBU and testing with a more potent Toslink source are victims of the lockdown). Loudspeakers were Wilson Duette Series 2 and cables were Nordost Odin 2.

I’m one of the lucky few who has spent time with the Kalista system, perhaps the most effortlessly natural and musical sounding digital systems around. And while Le DAC is at least an order of magnitude away from the pinnacle of Kalista performance, it’s heading in the same musical direction. And that direction is big and wide and extremely brightly lit. It does have an analogue-like sound, and without the same ‘you are there’ feel of the Kalista, but it’s close.

The sound is big without bloom, colourful without being overblown, and impossibly easy to live with. This makes for an intense, yet intensely likeable, sound on tracks like the title track from Marvin Gaye’s seminal What’s Going On album [Motown]. We’re all extremely used to listening to this album, but typically on vinyl. The digital transfers are variable, but even the best ones don’t match the silken tones of a good LP pressing… but Le DAC goes some way to restore the balance. That big voice backed by an equally big production is given a sense of soul royalty here where the normal digital mix makes Gaye sound like a fairly good singer. Here, he’s a living, breathing presence in the room, large as life (actually slightly larger than life… one of the few concessions Le DAC has next to its bigger brothers).

Play something with a more rigid structure – how I got from Marvin Gaye to John Pickard is hard to say – but The Flight of Icarus [BIS] is modern classical music that moves from crescendo to crescendo. The music needs space and definition or it sounds like music from Planet of the Apes, and normally that means dCS-like precision and detail. With the Le DAC, music is synonymous with resolution of space and timbre. The detail is there, albeit not as emphasised, not as front-and-centre, but this DAC has a very different accent. It’s not ‘more natural’, just has that sort of ‘deep listen’ quality that only live music and the best LP can muster.

The sound in both cases is expansive, with the sort of soundstage that is both wide and extremely deep. It’s not a holographic ‘walk in’ soundstage because the sense of musical theatre puts you very much in the audience rather than in with the band, but the scale and dynamic drama of the soundstage, coupled to a rooted sense of instrument solidity, is paramount.

I moved through my collection, and then moved through Tidal’s and Qobuz’ collections for fun too. In every case, the Le DAC tugged at the heart strings more than tangled with raw intellect. And in every case, this wasn’t a problem. This doesn’t mean the DAC is no good for the cerebral, it’s just that if you play something really technical – like Zappa or Boulez or some really difficult King Crimson – you are more driven by the performance than the skills of player or composer. Nevertheless, it’s best when playing something with a bit of red meat.

There’s one last aspect of Le DAC’s performance that perhaps best sums the DAC up; music is never boring through this converter. It’s impassioned, it’s emotional, it drives you on and locks you in (maybe not the best choice of term during a time of lockdowns and quarantines) as it enthrals and entertains. That is what it takes from the Kalista, and what so few other DACs can do. 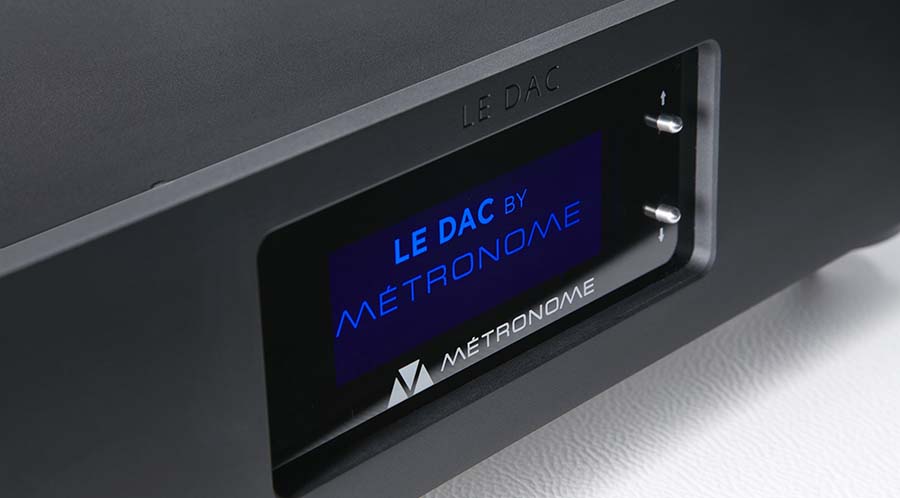 We’re used to a lot of functionality from our DACs, from remote control to streaming to a range of filters to suit the obsessive. Le DAC doesn’t do that. Instead. it’s just a damn good DAC. It makes music sound like music, and not some digital shaped noise. And once you hear that, you’ll likely begin to realise all that extra functionality might just be pointless if it doesn’t sound good to begin with. There is a distinct ‘family’ sound to Métronome’s products, from the Le DAC up right to the top of the Kalista tree. For those of us without a fortune to spend, this is as close as you get to real music done digitally.