Mellow Acoustics FrontRo is a very unusual looking — make that ‘unique’ looking — loudspeaker. That’s partly because it’s a hybrid electrostatic, but that is only one contributing factor. Designed by Josh Ford, the FrontRo actually looks a little like an inverted exclamation mark and leans backwards slightly to keep the electrostatic panel pointing towards listeners.

I knew nothing of Mellow Acoustics, so I thought I ought to find out a little. The company was founded quite recently, in 2011, by Tim Mellow who had accumulated some 30 years of experience in the sound industries. He wrote numerous JAES papers, and also worked alongside Leo Beranek on a new version of his classic work ‘Acoustics’. Tim is very much an electrostatic fan and spent some five years developing a new form of electrostatic panel, called an Oscillating Sphere. (For further details, see the JAES paper entitled: ‘How do we make an electrostatic loudspeaker with constant directivity?’)

In many respects the FrontRo is quite unlike any loudspeaker, partly because it stands very low on the ground (with a total height of less than 80cm), and partly because the shape of the bass chamber is essentially triangular (at least from the front). There’s also a slight backward tilt, to point the electrostatic panel axes towards the seated listener.

However, despite the resultant unique style, ‘looks’ weren’t the primary consideration. FrontRo consists of two distinct sections: the ‘triangular’ sealed-box bass section supporting a circular electrostatic panel with a diameter of around 32cm/12.5ins.

Crucially (in my opinion) it has a crossover frequency at a relatively low 600Hz, which is a couple of octaves below the typical two-way model based on conventional dynamic drivers, and well below the zone at which the hard consonants associated with speech are found.

According to the specification, sensitivity is a low 84dB. This does suggest that low powered valve amps (i.e. single-ended types) might be better avoided, as are high maximum outputs. However, the speakers worked fine in terms of the available dynamic range in a domestic setting, despite the inevitable loudness limitations.

In-room measurements showed a bass output (though not extension) at -8dB below 70Hz. Happily, this seemed largely irrelevant subjectively speaking, especially given the intended room size. There’s some loss of output 350-700Hz, a tendency to peak up at around 1kHz, and a rolloff above 15kHz. However, the trend across the broad midband (from 80Hz–1.5kHz) is smooth and well balanced. On-axis listening is preferable for maximum output, and this helps explain the slight backward tilt to the speaker.

Unfortunately, I didn’t have a full-range electrostatic (such as a Quad ESL63) to hand for comparison, especially since the two are roughly similar in price, and both operate as dipoles in their electrostatic sections. That said, after some weeks with the FrontRo, I am impressed by the hybrid approach, especially when it’s done as effectively as here.

The small bass drive unit makes good sense in the context of a sealed enclosure of deliberately small dimensions. I did , however, have the benefit of the latest bass driver, complete with neodymium motor, and this apparently sounds significantly better than its predecessor.

I spent some weeks enjoying the sound made by these unusually compact loudspeakers, and despite the lack of relative bass output such a speaker size delivered, it never seemed in any way intrusive and the full (sub-30Hz) extension that sealed-box alignment offered was itself gratifying. Out of interest, I dug out a live Bob Marley and the Wailers album called Babylon by Bus [Tuff Gong/Island] and turned to the track called ‘Jamming’. The bass line was invariably crisp, clear and well defined, if lacking a little in terms of fundamental power.

I really enjoyed the FrontRo with speech sources, as these speakers are primarily focused on the midband (100Hz–1.5kHz). This midband zone is absolutely vital, and here the speakers remained impressively consistent from one location to another, despite some variation treble output.

I spent some time listening to the FrontRos as an alternative to the (much more costly) B&W 800 D3s that I regularly use. While the B&W’s have the performance edge in the extreme bass and treble, the FrontRos sounded truly excellent on speech, especially if one can sit exactly on the electrostatic panel axis as recommended.

A few years ago I was lucky enough to pick up a copy of the first Buddy Holly album (before they put the horn-rimmed glasses on him), and while that Coral original has much in its favour, I recently obtained a quadruple album entitled The Unforgettable Buddy Holly, which I’ve enjoyed greatly, partly at least because of the extra tracks. I was a trifle embarrassed to discover that the Reader’s Digest had been involved from the start but can unequivocally recommend this box set to any Buddy Holly fans out there, and the sense of vocal presence that shone through with the FrontRo highlighted why his loss to music was so profound.

Moving back to stereo, I spun The Chemical Brothers’ Born in the Echoes [EMI] and was surprised by the number of vocals involved I had hitherto not noticed, showing just how much detail the FrontRo was delivering. I also enjoyed the extra spaciousness very much indeed.

I’ve long been a fan of Big Brother & the Holding Company’s album Cheap Thrills [Columbia], but have recently added the Janis Joplin/Full Tilt Boogie album Pearl [Columbia] to my list, simply because of two tracks. The combination of ‘Me and Bobby McGee’ followed closely by ‘Mercedes Benz’ is enough to persuade me to take Pearl just as seriously, (even though I can’t recall hearing either song at the Albert Hall gig). Once again, the vocal talents of Joplin were portrayed well on the FrontRo, suggesting a speaker of rare detail, vocal clarity and dynamic range.

A similar – if somewhat more surreal – conclusion is drawn when listening to Laurie Anderson. Ever since the original ‘Oh Superman’ track, Laurie Anderson has been a long-term personal favourite, and I’m particularly fond of the album Strange Angels [Warner Bros]. However, I recently encountered a five-disc set called United States Live [Warner Bros], which is thoroughly entertaining through the FrontRo; if a bit weird at times, thanks in part to a heavy content of speech.

Finally, and partly because I’ve spent thirty odd years trying to figure out what he’s on about, my all-time favourite Dylan track is ‘Visions of Johanna’ from Blonde on Blonde [Columbia]. I gave this a spin, with very satisfactory results, as it hung together very well, and sounded exceptionally coherent. I almost get what he’s saying now. Almost.

A lack of serious bass weight and restrictions on loudness might be regarded as demerits for those in giant rooms but given the FrontRo’s footprint and its resultant intended audience, I see both as positive features for flat-dwellers! Reducing the bass output by around 8dB means much of the info is contained within the harmonic structure rather than the fundamentals, so little musical info is lost. And, of course, it would also be very helpful from the perspective of neighbour-management!

The whole is much more than the sum of the parts here, and the sound quality is first class, especially when reproducing speech. This is a loudspeaker with a distinct focus on a sound that simply does the business, supplying good sound quality wherever one sits and outstanding quality if you listen in the sweet spot. And although it may seem quite costly given that small footprint, in fact in real terms it does actually offer rather good value for money. 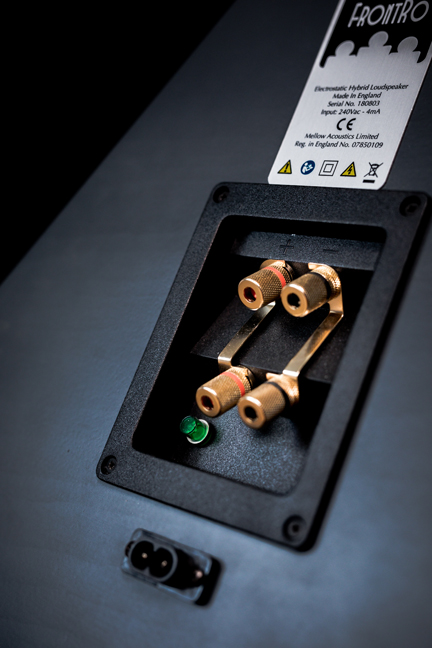 Ultimately, this is a speaker for those who play music in rooms that don’t like loudspeakers! Electrostatics tend to thrive in large rooms, and the FrontRo is the exception. In small to mid-sized rooms where electrostatics usually struggle, the Mellow Acoustics FrontRo delivers a fine standard of performance, especially with speech. I’ve concentrated on vocals in part because the FrontRo shows how poor many loudspeakers are at reproducing the human voice, but it’s not simply designed for speech replay; a loudspeaker that gets the human voice right tends to get music right, and unless you are a fan of trouser-flapping, filling-loosening organ music or genres that include the word ‘dub’ played in barn-sized rooms, this is the antidote to rectangular wooden boxes and the limits they impose on sound.