PMC patron Peter Thomas says that he “has always had a sneaking regard for electrostatic loudspeakers”. Having used stacked Quads many years ago, I’m inclined to agree. There’s definitely something ‘different’ about listening to electrostatics, whether full-range or hybrid designs like the ElectroMotion ESL X tested here. This might have something to do with the fact that they’re invariably dipoles, and therefore interact with a listening room in a rather different way to more conventional (box-type) monopole loudspeakers. It’s also important to sit down in the listening seat in order to achieve the correct treble balance.

After some years as distributors of electronic brands such as Bryston and AVM, PMC has recently formalised its UK Distribution operation as a separate division. Its first task will be to take over the distribution of MartinLogan loudspeakers from Absolute Sounds, offering hybrid electrostatic loudspeakers at the top end, plus lots of smaller and specialist niche models lower down the price ladder. This is not nefarious brand-raiding by PMC, however; MartinLogan’s smaller box loudspeakers and in-wall systems are at once part of the next-decade strategy for ML, a sector of the market in which PMC is interested. A UK speaker company distributing an overseas rival might be unprecedented, but the two companies do have very different philosophies and product portfolios, so they dove-tail rather than compete. 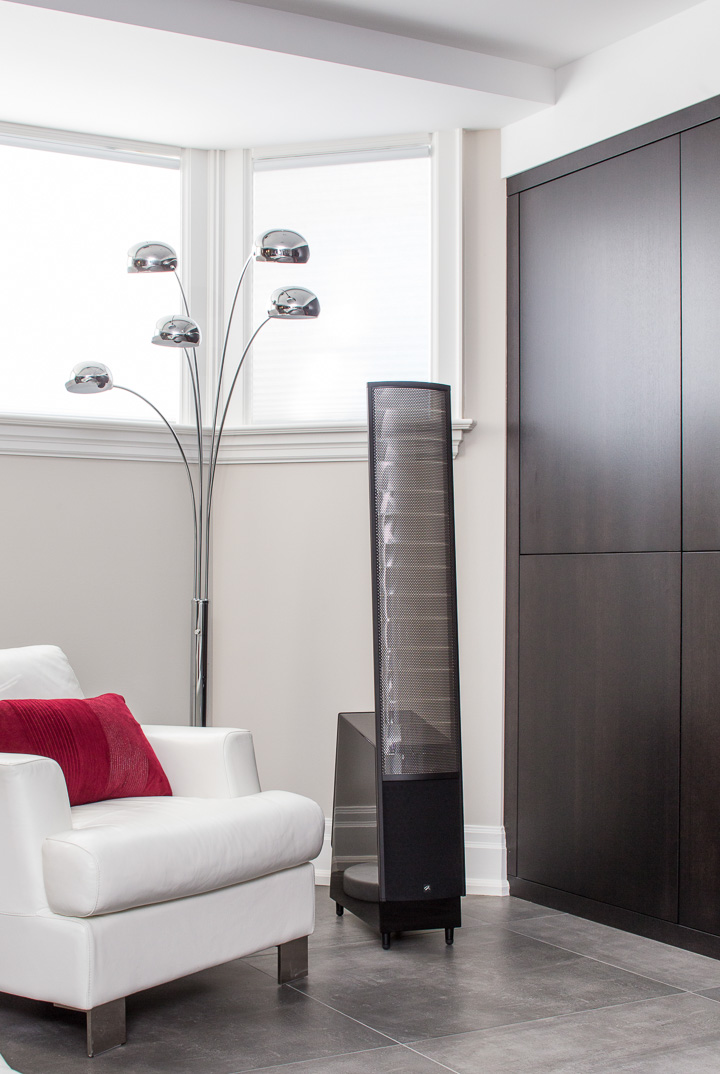 MartinLogan is actually larger than PMC by a comfortable margin, with an R&D operation of around 30 people in Kansas City, plus some 200 carrying out production in Toronto, Canada. Although it was originally founded in Kansas City, MartinLogan was purchased by Canadian company Paradigm some ten years ago, and is currently owned by the Bagby family, along with Anthem.

Full-range dipole Quad Electrostatics are well enough known in Britain, because they revolutionised the loudspeaker scene from 1957 via the original two-way model, or the subsequent more complex ESL63 and its variations. However, MartinLogan has always made hybrid electrostatics, with relatively narrow electrostatic panels that operate above conventional dynamic bass sections. My recollection of early ML speakers was that they experienced some difficulty in integrating the bass box with the electrostatic panel, but that doesn’t seem to be the case any longer.

Although five costly Masterpiece models have active dynamic bass units that incorporate ARC (Anthem Room Correction) room equalisation, our review is focused on a pair of entirely passive ElectroMotion ESL X, featuring twin port-loaded 200mm bass units and priced at a fraction below £5,000. (For smaller rooms there’s a £3,500 ESL with twin 150mm drivers and a smaller panel; there are also a number of Home Cinema additions.) The 21×104mm panel used by this ESL X has a gentle lateral convex curve. 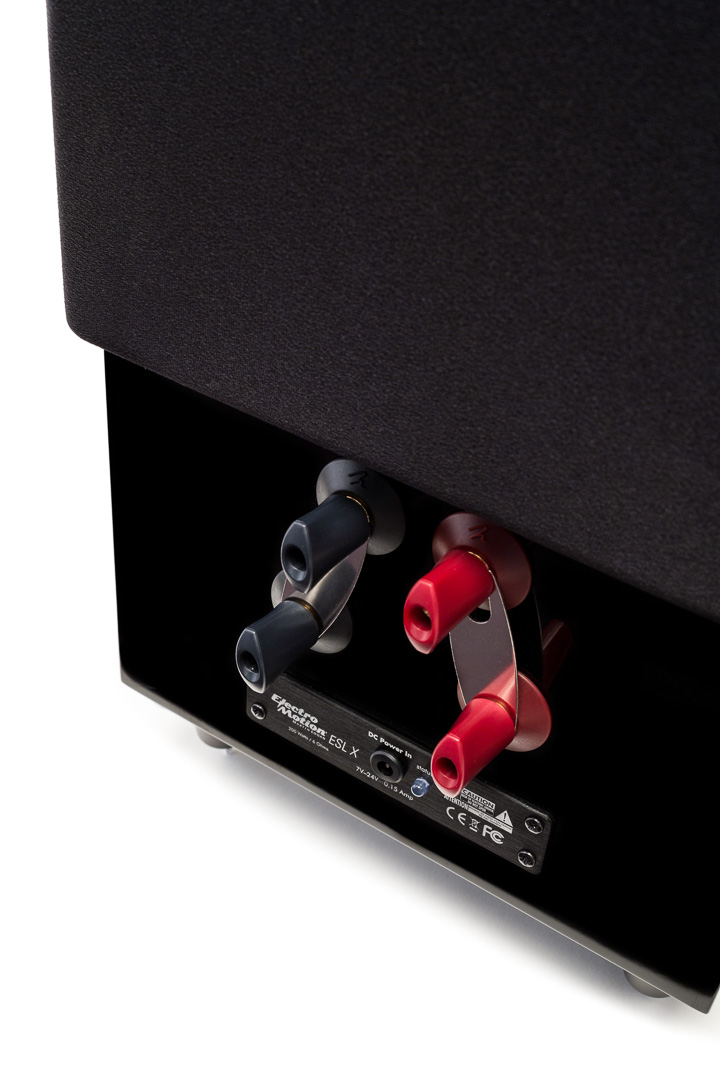 While the ElectroMotion ESL X undoubtedly stands tall, with an overall height of 150mm, most of this consists of a curved and semi-transparent panel. The reflex-ported bass unit, sitting underneath the vertical electrostatic panel, has a deliberately asymmetric enclosure, and mounts the 200mm drive units at the front and the back (so that the mechanical forces cancel out). The crossover point is designated at 400Hz, which is certainly lower than most two-way designs, but that’s no problem at all here.

Basic measurements reveal a decent sensitivity (albeit somewhat below that claimed), plus astonishingly smooth and well controlled upper frequencies above 500Hz. Things are much less smooth below 500Hz, with variations as great as ±7dB, but they still supply an average 89dB sensitivity. The impedance looks a little problematic, as it appears to be rather low at both ends of the band. The bass is generally low, at around 5ohms, with good damping and reflex-tuned to around 28Hz. The top end falls steadily at higher frequencies, so that those above 12kHz are below 4ohms. (Frankly, I think it might well be compromised if used with valve amps.)

While I did find the bi-wire multi-way terminals to my taste, I was a bit perplexed by the need to energise each of the speakers with a low DC voltage. This is used to energise the upper range electrostatic panels, by plugging each speaker into the mains. Set-up involves carefully aligning the electrostatic panels by shining a torch at the two panels from the listening seat, to make sure that both panels matched and were set at the correct angle for best results. Having your speakers ‘torched in’ (This is also one of those times where British English wins out over its American counterpart; replacing the word ‘torch’ with ‘flashlight’ is fine, but ‘flashed in’ sounds a little pervy) is a unique way of installation that only applies to the curvilinear panels of MartinLogan loudspeakers. However, it is extremely effective and – if there are two of you (one in the hot-seat holding the torch and one steering the speakers) – remarkably quick. Fine-tuning from this ‘torched in’ listening position is possible and beneficial (especially in terms of relative position of speaker to length of room), but never forget to recheck the ‘torched in’ placement during the installation from time to time.

That done, I found myself falling in love with electrostatics all over again. Note that it’s absolutely vital to sit down in order to maximise the treble output and audition the speaker properly. I think it was the sheer tangibility of the image that these things deliver (or at any rate used to deliver, until one example decided to go faulty on me). With that problem fixed, I’ll happily admit that the ESL X sounds very neutral and is also quite dramatic. The smooth upper frequencies are particularly impressive, and the integration with the bottom end is both seamless and very well judged.

There’s unquestionably something altogether ‘right’ about an electrostatic top end. This might be to do with the tiny movements involved, but its behaviour is certainly smoother and flatter than most conventional point-source domes, in the author’s experience at least. When one speaker was playing in mono, during to a television documentary, I was interested to note a substantial difference in distortion between poor quality ‘live’ (direct to camera) and much cleaner sounding dubbed vocals.

Part of the reason might have to do with the measurements, which were a little less even than I had expected, and also tended to emphasise the presence band. Indeed, although the response holds within ±3dB limits from 500Hz up to 7kHz, the output peaks at 2kHz, which is roughly the inverse of conventional dynamic speakers. As a result, while the ESL X tended to sound brighter than a dome-type tweeter, it never seemed too bright.

I’d rate the sensitivity at around 89dB, but the bass end (sub-500Hz) is very uneven. However, don’t let the uneven bass end put you off, as the smooth (albeit somewhat forward) mid-band dominates the bass end. This speaker works particularly well at modest levels, due in part at least to the forwardness that seems to emphasise the voice band. 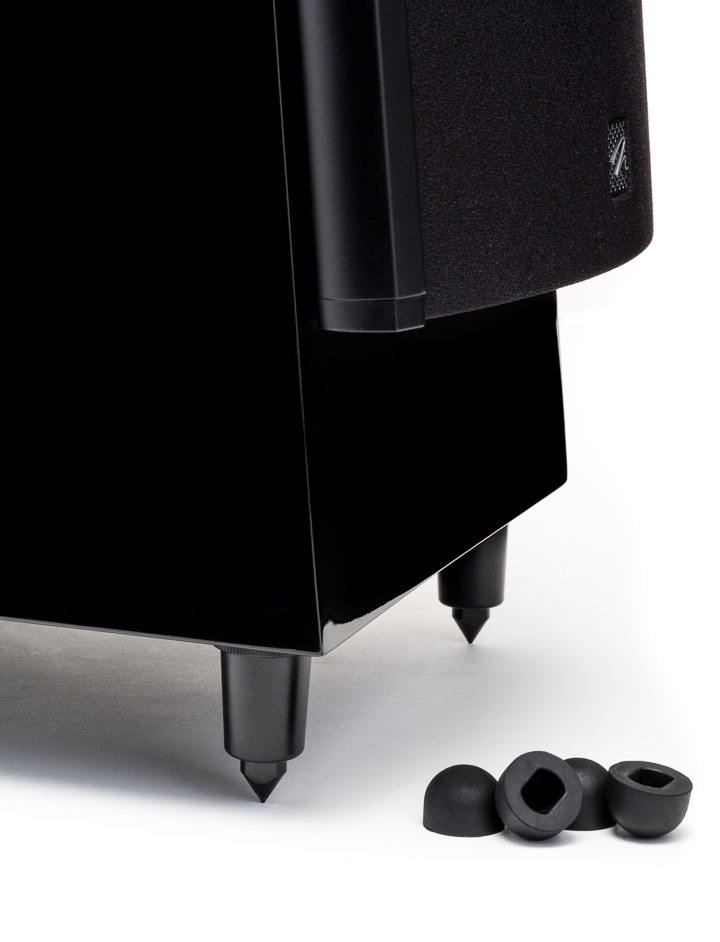 Like most electrostatic loudspeakers in a dynamic loudspeaker world, this is a difficult speaker to summarise. In part it places an emphasis on the listener’s reaction to the sound, but if you find yourself swayed by an unparalleled lack of perceived mid-band and high-frequency distortion, there might be no going back. The MartinLogan Electromotion ESL X is an exceptional performer for the price, especially for anybody who likes to listen at modest levels (the larger models are more accommodating for the unrepentant headbanger). What the speaker offers is something that both sounds – and looks – distinctly and genuinely ‘different’ from the norm, and for many that’s a good thing. I reckon that such an observation alone should be enough to put it onto many listeners’ short-lists.

Distributed in the UK by:
PMC Distribution UK

Enjoy the Music.com To Rebroadcast Our Live Stream Of Blues Masters At The Crossroads 2014