When Ken Ishiwata was lured into working for Marantz in 1978 he had already been at Pioneer Japan for ten years. The story goes that the European base that Superscope had created for Marantz in Belgium was having trouble with high rejection rates on the product coming over from Japan. They approached Ken in 1977 because they needed someone with both business and engineering acumen, but being a canny chap, he asked for a deal that Superscope couldn’t match. Eventually, however, they capitulated, and Ken moved to Marantz a year later.

Initially he spent some time at the Standard Radio factory that was manufacturing electronics for Marantz where he says that standards were extremely high; every unit was tested before shipping in an era when (as now) only samples were checked. When he got to Belgium, Ken started to test the rejected units and found that by the parameters of the manufacturing plant they were spot on; the problem was that the engineers were using different parameters. So ultimately it was a communication issue. 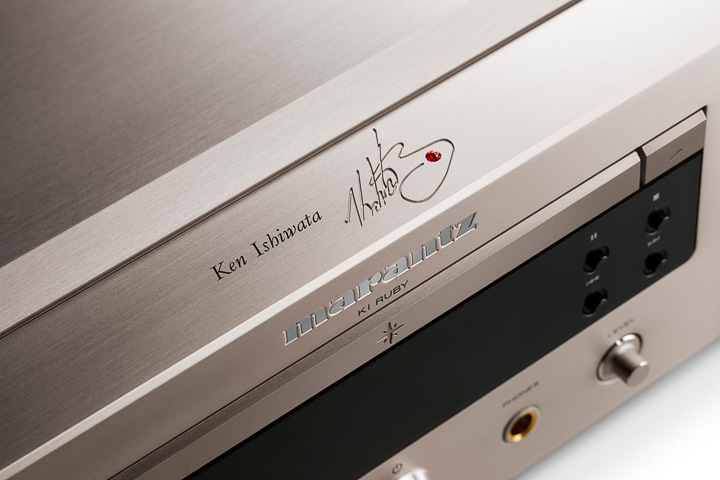 Ken’s first products for Marantz were loudspeakers and it wasn’t until the first KI Signature CD player in the mid-1980s that he switched to electronics. His guru legend began when he made some changes to an existing model (CD63) that was not proving very successful and the company was in danger of having a warehouse full of machines that would be soon superseded. By making a few judicious changes to key elements, Ken was able to create an award-winning CD player that sold like proverbial hot cakes. Since then, his status as brand ambassador has grown and now his name is found on all but the most lowly of Marantz products. His 40th (ruby) anniversary with the company is cause for celebration, featuring a couple of limited-edition products; the PM-KI Ruby integrated amplifier and SA-KI Ruby CD player.

Calling the SA-KI Ruby a CD player is to understate its capabilities quite severely. Not only will it spin most disc types including SACDs and those encoded with WAV and FLAC files, it is also a fully featured digital to analogue converter. It is built to a massively high standard, and this is fairly obvious at a glance, but when you turn the player over and see the milled and copper plated chassis and lovely felt padded feet, the impression is reinforced. It needs to be said that when the Japanese do something on an industrial scale the value for money is without peer – when smaller high-end companies build to anything approaching this standard they have to charge at least twice as much, and most high-end audio companies are ‘smaller’. I love the way that the analogue outputs are silver plated, for example, and that the remote has different power buttons for amplifier and player/DAC.

Under the skin it’s impressive as well. For a start, Marantz is part of the Sound United group along with Denon, Polk, Boston, Classé, and Definitive Technology, which gives it the scale to build a dedicated SACD/CD drive mechanism that will also play from CD- and DVD-ROM discs. It has an asynchronous USB input that’s good for up to 384kHz/32-bit and DSD11.2MHz sample rates. In fact, the DAC converts all incoming digital signals to DSD11.2 MHzin order to avoid the limitations of oversampling that are intrinsic to PCM signal processing. It features two onboard clocks and offers two filter settings that are selectable with the remote. The power supply is based around a high current toroidal transformer that must contribute to making the SA-KI Ruby as heavy as the PM-KI Ruby integrated amplifier.

As if all this were not enough, the SA-KI Ruby has a dedicated headphone amplifier with discrete circuitry and a laser-engraved signature on the top with a ruby motif that is presumably glass, but nevertheless catches the light rather nicely.

When Ken Ishiwata demonstrated this product at its launch, he used his laptop as a source, running JRiver 23 as the playback software. The result was very good, but I couldn’t help thinking that even the best set up laptop is a poor substitute for a decent audio server. The results I got at home backed this up and revealed the DAC side of this machine to be extremely good indeed. I used the Innuos Zenith SE and connected to the Marantz with Vertere HB USB cable – controlling playback with Roon revealed that the SA-KI Ruby is down with this most reliable of control apps.

The overall character is of effortless musicality, as with the SA-10 that it so closely resembles, this DAC is magically quiet, which means that you can hear deep down into each recording. It’s the quietest sounds that make the difference with digital audio; in the past you got the impression of silent backgrounds, but in fact what happened was that the smallest sounds were hidden in the noise floor created by distortions peculiar to the medium. This Marantz breaks through that barrier by taking noise down that much further. It makes for thrilling listening especially with tracks that tend to sound a bit messy like Van Morrison’s ‘The Way Young Lovers Do’ [Astral Weeks, Warner Bros]. This track is always lively thanks to the almost freeform nature of the arrangement and while a good DAC can get it to flow in coherent form this Marantz manages to make it sound almost polished with excellent stage width to boot. Some might prefer a grittier, ‘warts and all’ presentation, but this smoothness doesn’t get in the way of the detail; it just makes less pristine recordings sound more relaxed and easy to enjoy. 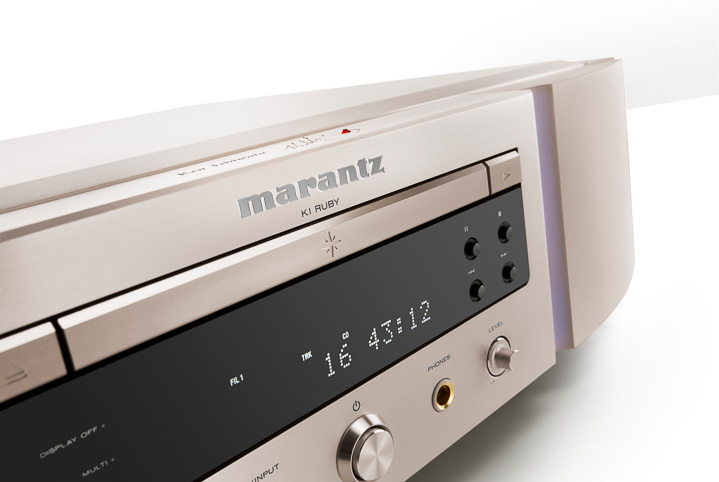 It’s also not lacking in dynamics as there’s plenty of drive and energy on tap where it’s required and it’s very hard to press stop; the album’s title track sounded pretty damn beautiful as a result. Roon chose Dylan’s ‘Subterranean Homesick Blues’ [Bringing it all Back Home, Columbia] as a follow up, I guess the vibe is similar, and this was raucous glory personified with as much vitality as you could want. I also like the way that it delivers enormous differences in image scale and depth between recordings; it’s something that should change to some degree with every change of disc, but not all converters give you the full effect.

The SA-KI Ruby seems to be very good at picking out the ‘voice’ in the music, whether that be a piano, a saxophone, or an actual voice, it highlights this rather than the rhythm or dynamics, and it does that regardless of format. I guess that given it turns everything into one bit prior to conversion it’s not surprising that DSD sounds very similar to PCM. I contrasted a recording of Mozart’s ‘Violin concerto in D major’ [Marianne Thorsen, TrondheimSolistene] in both formats from the 2L label. They were both deep and wide and replete with detail so that the only real difference was a stronger sense of melody with the PCM, and for some reason this version seemed more compelling than the DSD. But both sounded very fine indeed.

I also played a few CDs, which if nothing else led to the discovery of just how slick a drawer mechanism this machine has (it’s up there with the smoothest in the business). I couldn’t see the eject icon in low light, but once found it’s not forgotten. The music of Anouar Brahem [Barzakh, ECM] reproduced by this source was sublime: Dave Holland’s bass was deep, sonorous yet agile, while the lead oud told its story. Frank Zappa’s Thing-Fish[Zappa Records] is a bit less charming but gripping nonetheless, and the SA-KI Ruby’s rendition of ‘Mammy Nuns’ was rather less ‘digital’ than it can sound on many players. Switching back to the server for the same track does bring with it certain rewards, notably in dynamics, detail resolution, and timing. The DAC reveals that while CD replay is very good, it’s not in the same league as the streamed alternative. 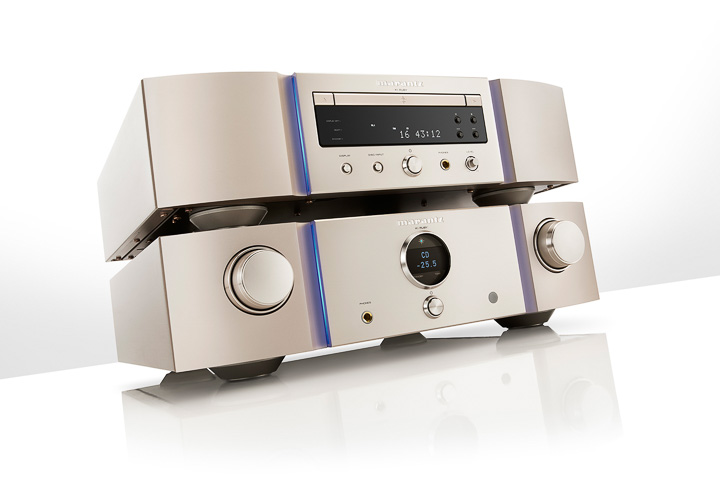 I doubt you can buy a better built and finished player for the money than the SA-KI Ruby. Maybe that’s why it’s limited to 999 units in gold and the same quantity in black. The fact that it provides such a stonking DAC on top of a highly finessed CD player makes it the perfect transition product for those making the leap to streaming. From a value for money perspective I’d say that the Ruby is the jewel in Ken Ishiwata’s crown!

Digital Inputs: Two S/PDIF (one coaxial, one optical), one asynchronous USB-B, one USB for iPhone/iPod, USB-A for memory device