Perhaps the strangest turn in 21st Century music replay is this: how did the UK get so damn good at streaming? This isn’t simply flying the flag for Britain; UK companies were early adopters to the benefits of streaming, and while others have caught up, that commanding early lead has long kept paying out dividend in terms of high-performance streaming audio. So perhaps it should be no surprise that a brand that has been in pole position since 2007 – Linn Products – has reworked its flagship Klimax DSM streaming player to produce an identically-named replacement.

In fact, the name is one of the few things this Klimax DSM shares with its predecessor. This is an entirely different streamer for a market that has become ever more discerning and wanting to extract the best possible from networked audio. Although Linn itself might argue that the point of transition – from physical digital media to local networked and ultimately online streamed music – occurred more than a decade ago (hifiplus.com/articles/linn-products-announce-the-death-of-cd/), it took some time for the rest of the world to catch up. However, catch up it did, and the world has largely moved from considering streaming as the poor relation in digital music replay to being the primary source of music, and with that comes a desire to hear that music in its best possible context. While that has meant a whole new sub-set of the audio world has sprung up producing audiophile-chummy versions of domestic network audio devices and cables, the need for a damn good streamer remains. And in the case of the Linn Klimax DSM at least, that damn good streamer now becomes the damn good heart of a damn good system too. 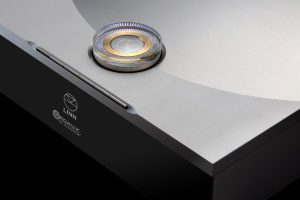 I don’t want to focus on the styling, as there is a whole lot of tech going on under the hood that makes the Klimax DSM just so advanced when put against its peers, but you just can’t help be drawn to those looks. Klimax DSM is one of those products where the images look great, and yet still don’t do the product justice when compared in the flesh. It’s a bold departure from the ‘smiley-face shiny pizza box’ styling of its predecessor – and with its top dial is clearly designed more to sit on its own rather than in a rack full of shiny toys, but it does ‘understated elegance’ supremely well. It’s full of those clever touches like a screwless case, a front display that blends invisibly into the front panel, a set of configurable buttons that wouldn’t feel out of place in the passenger compartment of a Rolls-Royce, and a central top-mounted dial that is so tactile, and makes such a bold-as-brass statement about Linn’s Clydesdale home, you can’t help but be drawn to it. The nearest to criticism I’ve heard here is it looks as if it is made for someone in a Huf Haus full of Ercol furniture; in other words, it’s too elegantly designed for audio!

Then there’s the grooved top panel, designed specifically to remind users that Linn is both a music-led company and that it cut its teeth on record-players. Remarkably, it’s getting close to half a century of Linn Sondek LP12 turntable production, and the venerable, continually-amended design still shows no sign of aging; not even greying round the p-clips! Those with an LP12 in its current top-spec will view the Klimax DSM as its visual and sonic peer; those without a record player will like the grooves as a nice flourish, and those with another brand of high-end turntable might reconsider their options.