Lindemann is a German manufacturer that started out in fairly conventional fashion building integrated amplifiers and loudspeakers in 1993. By the turn of the century, the company had added a CD player and a phono stage, and over the last 15 years expanded that range to include SACD players and a broad range of amplifiers. Then in 2013, founder Norbert Lindemann realised that the market was changing and started to slim down and modify the range to meet the 21st Century. Now, Lindemann only builds the Musicbook products. Small is, it seems, beautiful even where aspirational hi-fi is concerned, and if you can get the same quality out of a device that’s half the size of regular devices, it’s hard to argue with in an age where space is at an expensive premium.

The Musicbook is aptly named, as you could possibly install it on its side to give it a bookish look, although having the display sideways might not work. It’s only 6.5cm high and weighs three and a half kilos. There are several Musicbooks in the range. They start with the 10, which is a DAC/preamp, while the 15 adds a CD player, the 20 ditches the disc player and offers streaming, and the 25 tested here gives you all three source options. Whether a streamer needs a USB DAC is open to debate, but it does mean you can access sources like YouTube that are not offered in the Musicbook’s array of streaming services. At present this consists of Tidal and internet radio but Lindemann plans to add other popular services in the future. Bluetooth is a standard feature of the range should you be inclined to send sounds from your mobile device, something that even purists like yours truly occasionally indulges, although I wouldn’t admit as much! 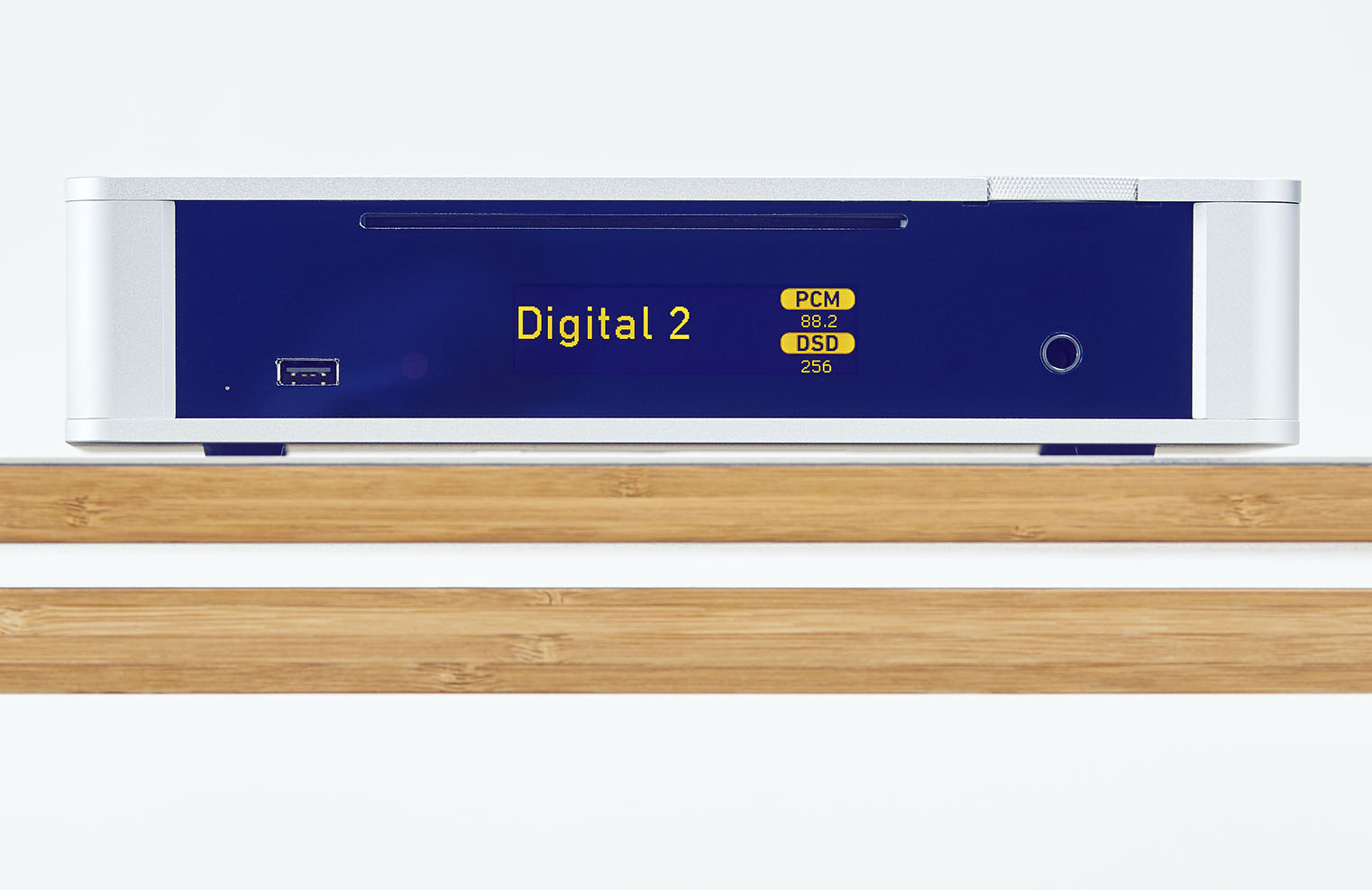 The feature change between the latest Musicbooks and their predecessors is the addition of DSD conversion and upsampling. All digital signals can be upsampled to 384kHz PCM or DSD128, and DSD signals are handled natively. I can’t think of any other CD players that do this and DACs that can are pretty thin on the ground as well. Norbert is keen on DSD so the review sample was set to upsample to that format out of the box, and you have to pick through a simple menu on the unit itself to change it. He likes it from an engineering perspective because it removes the processing element from the digital to analogue converter, leaving it to act as a filter alone. It also makes jitter less of an issue, which has to be a good thing.

The Musicbook control app is a slick looking interface, albeit not one that shows you a screen full of album art. Instead, you get a list of titles or artists with a thumbnail for the artwork. There’s no alphabetical listing down the side of the portrait-oriented graphics, but the slider allows rapid jumps to different areas of the library. Internet radio has a useful search function, but scrolling through the listings of stations is confused by a non-alphabetical listing: I could find BBC Radios 2, 3, and 4, but not 6Music or Radio 1. It’s quite hard to find genre listings too, and when you do there’s no sign of ‘ambient’, but I managed to track down the excellent Fluid Radio anyway, using the search function.

The Musicbook:25 DSD sounds at least as good as it looks, and it looks pretty damn fine. Don’t let the compact size fool you – this is a high-end piece of kit whether you use it as a DAC, a CD player, or a streamer and it’s pretty capable as a preamplifier too. You can choose between three levels of maximum output voltage from the RCA phono or XLR outputs and, unlike the majority of lifestyle oriented streamers, the volume control is of the analogue variety, so it doesn’t squash dynamics or veil the results in the way many bit-chopping digital controls do. It’s pretty close to a very good standalone preamp, conceding surprisingly little in terms of transparency and freedom from artifice to the Townshend Allegri. This is a good thing because you can adjust level with both the remote handset and the app; the former being easier because it offers continuous change rather than the need for multiple taps. The handset is also rechargeable via that most ubiquitous of modern connectors, the micro USB.

Used as a streamer with a direct Ethernet feed from a Melco N1-A server, the results were pretty compelling from the off. Clearly the AKM DAC chip that Lindemann selected for its latest range does indeed “set a new metrological benchmark”, which I take to mean ‘times well’. It also separates out different strands or layers in a mix and renders them in entirely convincing fashion. Take a tangled up song like Van Morrison’s ‘The Way Young Lovers Do’ [Astral Weeks Warner Bros], with its mêlée of percussion, horns, double bass, and more. This is not an easy song to deliver in a coherent and clear-cut way, but the Musicbook:25 DSD manages it with ease. In the process, it reveals a bass line that drives the rhythm, amidst instruments that sound as real as the recording allows.

The near invisible nature of the disc slot makes it easy to forget that this Lindemann is also a CD player, and a pretty competent one that. It had no difficulty extracting the music from the charmed clatterings of In the Country’s ‘This Was The Pace Of My Heart Beat’ [Rune, Grammofon], an album that requires ‘good metrological precision’ to reveal its true musical nature.

Next up was a comparison of PCM versus DSD upsample with Amandine Beyer’s Bach Sonatas & Partitas BWV 1001-1006 [Zig-Zag Territoires], a solo violin performance that gained not only extra ‘air’ but also a sweetening or the mid and top in upsampled mode. More percussive work also improved in timing terms, which is very useful indeed and not something I’ve encountered with DSD upsampling in the past. Maybe there’s something in it after all! Native PCM has a more honest sound perhaps, but it seems a bit ‘warts an’ all’ by comparison. If you enjoy finesse in your sound, then the DSD approach will certainly appeal, as will the Musicbook:25 DSD all round. Compared with other decent DACs using a USB source it managed to deliver a fuller, more rounded rendition of all manner of material; in fact I found the USB sound marginally better than that from the network which doesn’t often happen. That said, the USB cable (Vertere HB) is considerably more pricey than the Melco Ethernet cable and such factors cannot be ignored at this level.

Clearly the Lindemann is a revealing and capable piece of kit – one that I feel confident in saying competes with the best of streaming competition at the price, in terms of timing and detail resolution and ease of use. When playing original DSD material from the marvellous 2L label the Muiscbook:25 DSD did a fine job, so that Beethoven’s Maestoso sample from that source had phenomenal poise, the piano sounding solid and hard, but not metallic, and the tracking of note decay and tempo were clearly in the top league. Good enough to encourage the rather more fundamental electric blues of ZZ Top, on this occasion ‘Enjoy And Get It On’ from Tejas, [Warner Bros]. To create the air guitar factor on this track, timing has to be spot on and noise levels good and low; there are lots of quieter sounds like Billy Gibbons’ utterances that enhance the result. The Lindemann put them all out before me in precisely the right fashion; not too warm or too cool, just plain smokin’.

I tried the coax input with a Rockna Net digital transport. This proved that the Lindemann’s DAC section can hit the spot on both old and new connection fronts, producing texture, dynamics, and solidity that have a really juicy bottom end. It was interesting to contrast imaging via USB and network – the former delivering the more realistic and focussed result while the streamed sound was a bit more diffuse. Beyer’s strings sounding that bit more gutty via the Ethernet connection.

The Musicbook:25 DSD is a remarkable streamer/DAC/preamp for the size and price. It’s an ‘all this and brains too’ product for anyone looking to get involving sounds from all manner of sources. Pair it with some active speakers and you have a compact, well thought out, and beautifully executed sound system that will dispel any notions that bigger equals better when it comes to the search for audio ecstasy.