I’ve always wanted to say something like this, but the Kudos 505 comes from a race of Titans! It’s the smallest and lone stand-mount in a four-strong Titan range, all of which use the same basic profile; a rear-ported isobaric design, like the 606 and 707 it’s a two-way design, and all of them can be powered actively as well as basic passive operation. The Titan 505 arguably lends itself to passive drive slightly better than its bigger brothers (by virtue of not having those bigger cones to move in the two largest models), and this is the ideal model for the listener in smaller rooms.

Kudos uses SEAS drive units, custom made to Kudos specification, throughout the Titan range. They all use a 29mm K3 fabric dome tweeter (a ‘Crescendo’ K3 dome in the 808). Both the Titan 505 features two SEAS‑Kudos 180mm mid-bass units, composed of double-coated paper cones, with a 39mm voice coil that uses a copper shorting ring, and an aluminium phase plug with Kudos three-lobed racetrack logo on the visible driver. 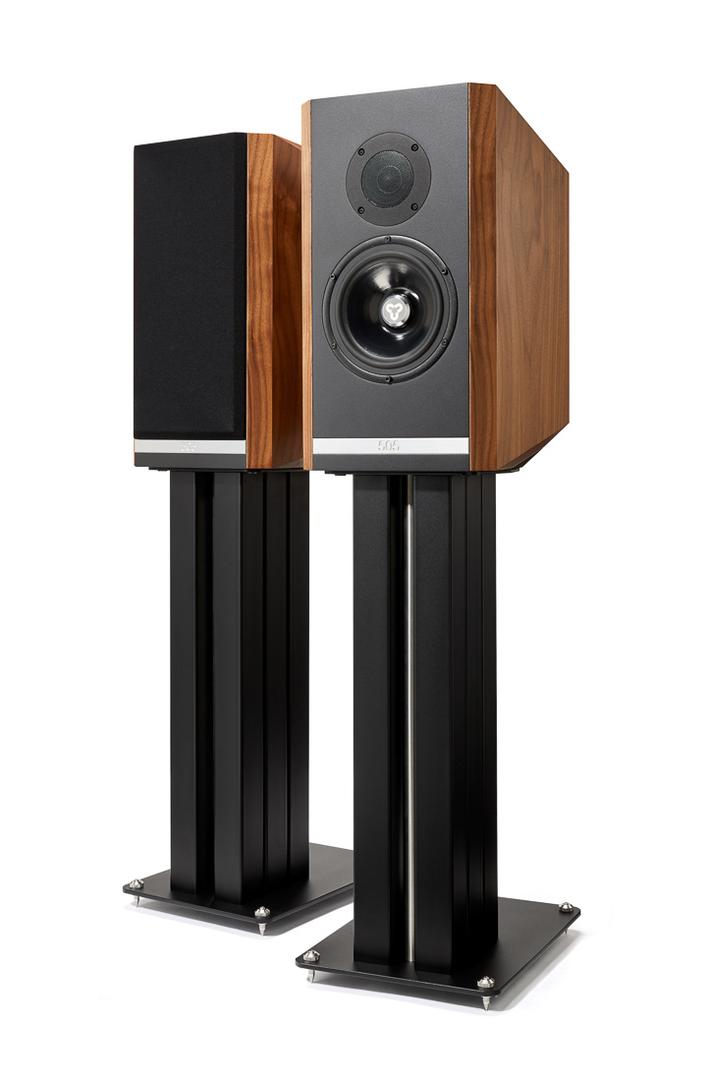 The second of the two mid-bass units is internally mounted in an isobaric bass reflex system. Isobaric loading requires two identical bass units wired in parallel inside a common cabinet, so that the front face of one unit and the rear face of the other operates within that cabinet. Kudos adopts a back-to-back driver arrangement, with a reflex port behind the isobaric chamber.

The cabinet itself is well-finished, and the side cheeks come in a range of five finishes, including the lovely shade of walnut in which our samples were supplied. However, the front baffle, top, and rear are all in a contrasting flat black. Under the surface is some fairly powerful resonance control techniques deployed throughout the loudspeaker.

The crossover is a key feature, in part because it’s inherently defeatable. If you go passive (as we did), the loudspeaker has a minimal, low-order crossover with high-grade components from Mundorf and Clarity Caps. However, the rear panel is festooned with links and connectors, and their removal gives the listener the chance to drive the loudspeakers actively. Thus far, active crossover networks have been developed with Linn’s Exakt system, Devialet’s Expert amplifiers, and Naim’s SNAXO electronics. We relied on a single Devialet Expert instead. Naturally this means more amplifiers in the chain, but the exercise is generally considered more than worth the effort and expense.

The Titan 505 is designed to be used with an integral equipment stand, which is itself deceptively heavy when filled and features some stealthy engineering in its own right. It’s a seven-pillar stand, with six of the seven pillars designed to be filled to the end user’s requirements.

Like many loudspeakers reviewed today, the review sample was the demonstration sample and had been given many hours of use before we got it, so any discussions of the run-on process or the time it takes to come on song were long past. The loudspeaker takes a few minutes to come on song when either moved or left fallow for any length of time. Give it a quick blast of Faithless for a few minutes to wake up the bass units. You can tell when the isobaric section kicks in… in an appropriately sized room, it’s like firing the bass afterburners. The sound fills in, drops an octave, and starts swinging a few gut-punches.

The first and most obvious point of the Titan 505 is its bass. For a stand-mount loudspeaker and a loudspeaker of its size, the bass is prodigious. Not overpowering or overblown, just that ‘where did you hide the subwoofer’ bass power and drive. This comes across on almost every piece of music played, but surprisingly showed up with the exposed click-track at the end of ‘Georgio by Moroder’ from Daft Punk’s 2013 hit album Random Access Memories [Columbia]. The end of the track slowly decays to a synth bass drum and then a click track, and the heft of the drum fades almost imperceptibly, but with the Titan 505 the delineation between the two is easy to hear and you know when the fade out takes place. Other loudspeakers also do this, but all that do are invariably larger designs. It’s at once a dry, taut bass and a ‘phat’ deep bass, largely depending on source material, which means it doesn’t get in the way too much; using Trentemøller’s ‘Chameleon’ [The Last Resort, Poker Flat] as a deliberate test of a port choking up and making ‘chuff’ sounds – and overall speed of transient attack at the low end – the Titan 505 behaved admirably well, and while it didn’t exhibit the absolute lack of overhang of a sealed box, overhang and port choke-up were chuffin’ minimal. In short, bass is deep, powerful, and very well handled.

I don’t want this review to focus on bass alone; although it’s the Titan 505’s signature dish, there’s a whole musical menu to be sampled and enjoyed. The loudspeaker also has a dynamic range and shade far beyond that of most conventional two-way standmounts of similar size; just play any powerful orchestral piece, such as Mahler’s Eighth symphony [Solti, LSO, Decca], and you are met with a loudspeaker that belies its size once again when the orchestra, organ, and choir go for it in the first and last movements. It’s also a subtle performer, with sufficient detail and dynamic shading and contrast to pick out delicate string noises on a DG collection of Segovia’s guitar playing. On a Bach Partita, the string squeaks are there, but at a far lower level than the playing; they should meld into the music like surface noise on vinyl on a good replay system. In effect, they make the track sound alive, but less dynamically precise loudspeakers make these squeaks sound too up front and become a distraction. Once again, the Kudos is all about the balance. 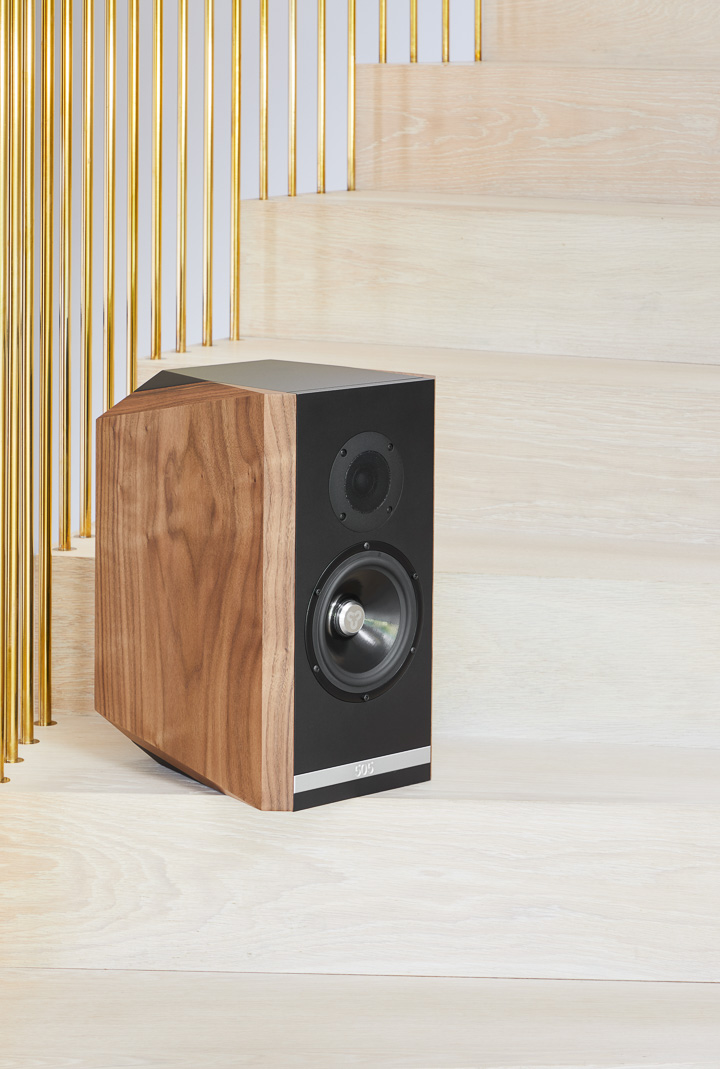 The treble is refined and extended too, without exaggeration or strong emphasis. This can be a problem with loudspeakers that deliver good bass for their size; the designer often can’t resist adding a bit of zing to the top end. Here, the treble is both well-balanced and extremely poised, staying in the Goldilocks zone between ‘strong’ and ‘rolled off’. Granted, we have become so used to a ‘hot’ treble these days it takes a few moments to remember what accurate and honest treble sounds like, but it sounds like this. The natural examples to show here are female vocals, which also highlight the ‘do no harm’ nature of the treble reaches down into the midband, too; the purity and simplicity of Joni Mitchell’s voice on ‘Help Me’ from Court and Spark [Asylum] was left entirely untouched making the record exceptionally moving and extremely easy to follow.

Stereo imagery and separation are outstanding too, although ‘outstanding’ set in the context of an ‘excellent’ performance elsewhere. Sounds within the soundstage are exceptionally well rooted in place and image stability holds throughout. However, if you are looking for some kind of three-dimensional hologram of the stage, the Kudos Titan 505 get you about 85% of the way there. The image is wide of the speakers and has excellent depth, in the manner of good wide-baffled classic British loudspeakers, but pin-point precision to the soundstage is a little illusive. My new go-to recording here is Joyce DiDonato singing ‘Tu sola, o mia Giulietta… Deh! tu, bell’anima’ from Bellini’s Capuleti e Montecchi [Stella Di Napoli, Erato]; as the song concludes, the orchestra fades into the background just leaving her voice centre-stage and a French horn behind and slightly stage right of her voice. In the best imaging products, the two are precisely delineated in a three-dimensional space; here they blend slightly. That being said, to get a loudspeaker that improves on this without sacrifice elsewhere is only possible at nearer twice the price of the Titan 505.

The Kudos Titan 505, like the other models in the Titan range, is making a lot of friends when heard in shows but is typically heard in active mode. But not everyone who buys a Titan 505 will buy it as an active loudspeaker, because the price of entry and no small amount of audiophile inertia pushing back against active operation. Played passively however, the Titan 505 is a real star too. Whether you view it as a stepping stone to active drive of a passive loudspeaker end in its own right, the Kudos Titan 505 is one of the most impressively well-balanced loudspeakers in its price and beyond.