Much like journalists across the globe, hi-fi reviewers are always keen to pontificate about the pros and cons of the latest must-have piece of kit. We’re always hungry for novelty! But out in the real world, there are many remarkable components and ancillaries that have passed the test of time by staying in production and maintaining a competitive edge against the latest and flashiest entrants to the market. Kimber Kable has a few models in its portfolio that fall into this category: cables that have been on sale for many years. The 8TC speaker cable for instance was originally introduced in 1985, which puts it up there with Naim’s NAC A5 for longevity. Kimber Hero interconnect is a bit younger, but it’s still been around for nigh on 20 years. Which, in a world of ever changing fads, is quite comforting, and more than can be said for some audio formats, let alone hardware.

Ray Kimber has always taken his own approach to cable design. His speaker cable is not a spaced pair like Naim or DNM, and neither is it a more conventional twisted pair as found in QED, Chord Co, and many others. Instead, Kimber speaker cables are made up of interwoven or plaited strands; a technique that provides a good degree of noise cancellation. The reason they were developed in the first place was to minimise noise in the light and sound installations that Ray worked on in 1970s night clubs. In electrical terms, this topology has higher capacitance and lower inductance than the other approaches mentioned, which is a good thing unless you have a vintage Naim power amplifier (where high inductance is required to keep the amp stable).

In 8TC, each of the 16 strands (eight for positive, eight negative) contains a variety of different gauge copper conductors insulated by low loss fluorocarbon dielectric (FEP). As the design’s longevity reveals, it’s a tried and tested approach that is found throughout Kimber’s speaker cable range. In essence, what changes with model is the quantity and quality of conductors and dielectric.

There are a number of termination options with 8TC: Kimber brand banana plugs, two sizes of spade connector, and the rarely encountered BFA plug required by some amplifiers. You can order it already burnt-in (a £15 upcharge) and/or Deep Cryogenically Treated (DCT, 64). Our samples were not subjected to either, but usually DCT is beneficial while burn-in typically is something that happens over time. In practical terms, 8TC is a usefully flexible cable that isn’t too thick, which makes it easy to run between amp and speakers.

Hero-Cu is the base version of Kimber’s midrange interconnect. You can also get a HB (hybrid) version that combines copper and silver conductors or a full silver AG version. Hero is the best selling interconnect in the range despite not being the cheapest. Construction is again plaited with four strands of multi gauge conductors covering positive and negative signal transmission, and also like 8TC, it uses FEP dielectric. The standard termination is Kimber’s Ultraplate Black RCA phono, but you can specify two models of WBT RCA, or XLR plugs on a balanced version. Overall diameter is just under 7mm, so once again this is an easy to install cable, its flexibility meaning you don’t need to allow another half metre just to get the plugs lined up!

I have always found Kimber Kables to be very capable when it comes to timing, and as this quality is so fundamental to genuine high resolution audio, I’ve never met one I didn’t like! Hero-Cu is no different; as soon as you drop it into the system the timing comes into focus alongside good image height and reasonable depth. On Chabrier’s ‘España’ from the album of the same name [NSO, Chasing the Dragon], you can hear most of the acoustic from Air studio’s biggest live room and the plucked double basses sound lovely alongside fluid and effortless strings. It could deliver more of the image width in a recording, and while a similarly priced alternative managed to take the sound even further out of the speakers, Hero’s stage was more precise had a greater sense of image solidity. It’s plenty detailed too, picking out the harp nicely on ‘Carmen’ on the same album, and delivering plenty of weight from the tympani. 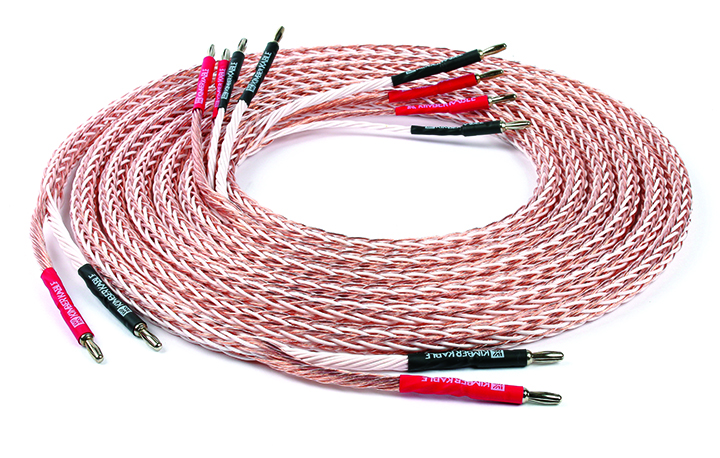 Using 8TC with my regular Townshend Audio cables the result is dry, tight, and superbly timed. There’s also a muscularity to the sound that suggests that the amplifier is able to exert more grip on the loudspeaker, which is a good thing for control as long as your amp is refined as well as powerful. It also draws you into the music well, which is a great quality for any piece of kit to have even if, as here, the highs aren’t quite as smooth as they could be. Combine the Hero interconnect with 8TC, however, and it balances out this slight exposure with a calming effect that brings more warmth to the treble without undermining the taut control that 8TC offers. You can hear why people say you shouldn’t mix and match cable brands when two cables work so well together. I also tried 8TC with a Naim Uniti Atom where no other interconnects are required, and here it managed to produce good image depth, really nice focus, and decent amounts of ‘air’ around acoustic instruments. Amandine Beyer’s solo violin [JS Bach Sonatas & Partitas BWV 1001 – 1006, Zig-Zag Territoires] really soars and swoops, and is full of texture and subtlety. Despite having a higher capacitance than Naim’s own cable, this pairing seems to work particularly well, the fact that both time so nimbly being a key point in their favour.

I think it’s safe to say that newer is not necessarily better and when it comes to the world of cables, even more so. New companies are always trying to tell the world that they have cracked the secret of the ultimate cable, but Kimber has the sense to keep on making what always worked. It ain’t broke after all!