With previous Keith Monks RCMs, the suction nozzle was made from a fairly hard, white plastic material. If this made direct contact with the surface of the disc, it could leave fine circular marks. These lines did not affect the sound, but they looked unsightly. To prevent this, the original design employed thread on a bobbin fixed to a slow-moving motor that turned one revolution roughly every 15 minutes. The thread stopped the suction nozzle from physically touching the surface of the disc – an inspired solution to a tricky problem. 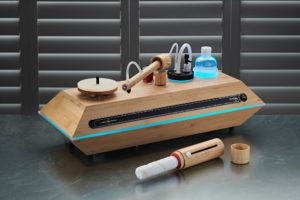 The Prodigy employs a polymer type material for the nozzle. Being softer and wider, it shouldn’t mark LP surfaces too easily. However, the arm may stick, or jump back and forth (rather than moving smoothly) if the suction is too powerful, and/or there’s insufficient liquid on the surface. You can adjust the degree of suction as necessary, and Jonathan Monks recommends you use plenty of liquid on the surface of the disc. Do this, and all should be fine. The original threaded nozzle is somewhat less pernickety but, as described above, can (and sometimes does) leave marks on your LPs. Jonathan Monks reckons the composite material used for the nozzle should be good to clean about 1,000 LPs before replacement is necessary. Each new machine is supplied with a nozzle, and it’s very easy to fit a new one.

In addition, the original Keith Monks RCM could encounter suction problems at the edge of a disc – especially on LPs with a pronounced lip. Because the arm moves more slowly, and the nozzle is bigger, the Prodigy is much less prone to this, and usually maintains suction so the outer-edge is left dry.

The Prodigy can also clean CDs/DVDs/Blu-Rays, etc. Given that digital discs can be washed under a running tap, there’s perhaps less need to clean them on a machine. But the option is there if you want to give it a try, and the Prodigy does the job well.

Most record cleaners are fairly noisy, and the Prodigy is no exception. The air pump is relatively quiet, but the platter motor isn’t. A quick measurement using a phone gave similar readings for both Keith Monks RCMs, but subjectively the Prodigy sounded noisier.

Keith Monks supplies a bottle of their DiscOvery alcohol-free record-cleaning fluid. This is biodegradable and made from natural ingredients. It works effectively and has a very nice scent. They also do a special formula to deal with LPs contaminated by fungus (mould) called BTM – BreakTheMould. Being a fully manual device, it’s possible to intensify the cleaning process according to how dirty an LP is. Badly-soiled LPs may benefit from a quick pre-wash to remove excess dirt and debris before being cleaned on the Prodigy and suctioned dry.

From experience, I’ve found that vacuuming the fluid (rather than letting it dry naturally, or with a fan) is the best way to leave LP surfaces free of noise. While natural or fan drying can also work well and leave LPs with quiet surfaces, vacuum drying is more reliable. But much depends on the cleaning fluid used, and how pure/clean it is. With Keith Monks RCMs, fluid is applied directly from a bottle to the record surface, so the fluid should always be pristine. Aside from the Keith Monks liquid, I favour VinylClear’s Deep Track Cleansing fluid. The Prodigy comes with a nice soft deep-pile plush cleaning brush. If more vigorous application is needed, I use a Tonar goat’s-hair brush which has stiffer fibres.

I should perhaps point out that, for the most part, I’m not cleaning ‘dirty’ LPs; most of my collection is in extremely good condition – free from dust and greasy finger-marks. I clean LPs simply because it makes them sound better. After cleaning, the sound has greater focus and precision, with better fine detail, along with a more effortless and relaxed quality. It definitely sounds as though the stylus is having a much easier time negotiating the grooves when playing cleaned LPs.

I definitely believe playing ‘clean’ LPs helps extend the working life of your cartridge. Grooves that are smooth and free of dust and debris are easier for the stylus to negotiate, so there’s less mis-tracking and less wear and tear on the stylus and suspension.

Cleaning also benefits brand-new records, as well as those that are older. While new LPs should be free of dust and debris, any mould-release agent in the grooves will increase friction. Doing a second clean after a few years pass may also prove beneficial; while cleaning gets rid of dust, dirt, and grease on the surface, as well as mould-release agents, it seems the vinyl will secrete a tiny amount of oil or goo over time that leaves the surfaces slightly sticky. This increases friction, which impedes the stylus. Clean this stuff off, and your LPs suddenly sound a whole lot better. The sound is smoother, cleaner, and more-relaxed; stereo imaging seems more solid. Recordings with strongly contrasted left/right channel information will have better separation, creating a more 3D stereo effect.