Such is the delta of change within the audio industry that products like the Kanto TUK weren’t so much a rarity as functionally non-existent just a few years ago. Then, there were a few difficult years when the products were best described as ‘floored’ (sometimes with the prefix ‘horribly…’). But recently – and it has been in the last year or so – things have changed. Instead of being a mediocre alternative to the real deal, suddenly active makes more sense. The Kanto TUK is one of the front runners in this revolution

Why the change, and what the TUK?

The change is more a confluence of small events that added up to a potentially big change. The move from ‘own’ to ‘loan’ in music, meant less focus on local sources and therefore less need for UPnP wrangling, Class D and Bluetooth both getting just a little bit better, and the need for a way for playing records that didn’t require the other parts of the ‘old school’ equation – amplifiers and larger loudspeakers, all made a market for a good, high-performance small active loudspeaker both a proposition and a reality. 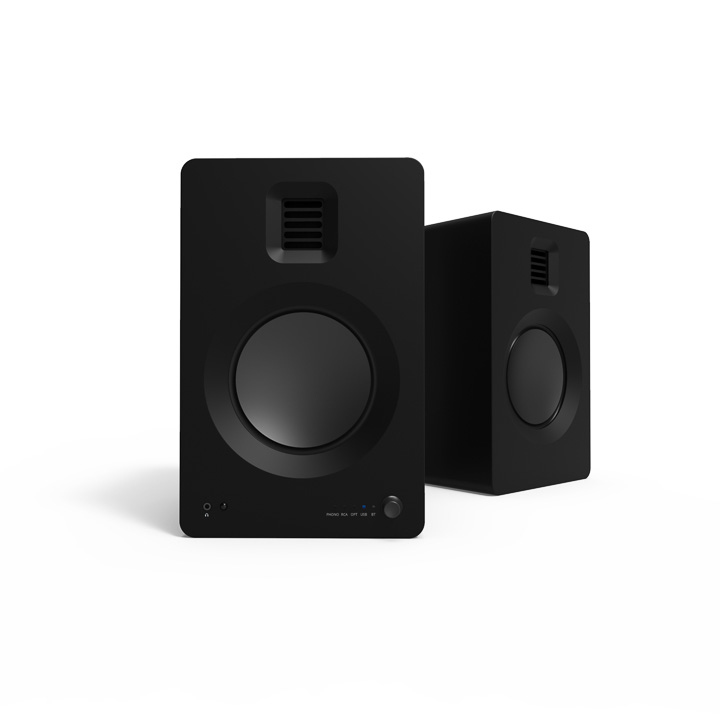 Now on to the Kanto TUK. One of the great advantages the TUK has is its specifications force audio enthusiasts out of their comfort zones. When it comes to products in this category, traditionally there has been a full naval parade’s worth of dismissal from the audio community, but those days are coming to a close. A product with an AMT ribbon tweeter shuts down the whole ‘cheap drivers in a box’ argument pretty quickly. All the other components give audiophiles the same degree of pause, too.

The TUK (pronounced, paying very close attention to autocorrect, ‘tuck’) is an active Class D two-way, rear-ported  loudspeaker, with an electronic crossover network that rolls off at 80Hz in that event of a subwoofer being connected (this doesn’t auto-detect, you need to tell the TUK about the sub from the remote handset). Otherwise, Kanto claims a 50Hz lower frequency point from the 133mm aluminium cone woofer, and in room – unless that room is a barn – that figure is achievable and surprisingly realistic.

The TUK system uses one active and one passive loudspeaker separated – perhaps unsurprisingly – by speaker connectors and cable. By default, the active speaker is the left channel, but you can swap over by pressing and holding the ‘Previous Track’ button on the remote for five seconds. You can also enable or disable the auto power up or power down from the remote. The TUK takes about six seconds to wake up or go to sleep.

In terms of wired inputs, the TUK sports a USB and Toslink optical inputs, a line-level input via two RCA sockets, and a phono preamp with a ground connection also via a pair of RCA sockets. The USB DAC behind the input is capable of 24-bit, 96kHz precision, but is not asynchronous input or galvanically isolated. The phono stage supports moving magnet cartridges. This is eminently sensible – putting a moving coil option on a pair of speakers at this level is gilding the lily. The only other connection is a charging port for a USB device (this does not act as an input for the DAC).

The front panel is also reasonably minimalist in aspect. Drive units aside, the controls on the master unit comprise a single multi-function knob (turn it… volume; push it in… source selector, with matching LED; press and hold… toggle standby mode). An IR receiver eye and a 3.5mm headphone minijack output complete the deal. You can also feed it from a Bluetooth device, and the TUK supports Bluetooth 4.2 with aptX HD and AAC codecs.

Kanto has built in Class D amplification capable of delivering 130W RMS, but such figures are relatively meaningless unless the efficiency of the loudspeaker section is taken into account. Fortunately, although not an insane party powerhouse of a loudspeaker, it plays more than loud enough to cope without clipping, and you’d really need to go full rabies on the volume control for sustained periods during a thunderstorm to do any damage to the TUK’s drivers. It’s a very well matched system in this way.

And that is the big feather in the TUK’s cap, it’s a very well-balanced piece of engineering. It was clearly designed to play the long game; not so loud and shouty that it attracts people in the short-term and pushes them away in the long. A volume headroom that makes you think twice before playing too loud, yet is perfectly comfortable at low level listening, and an overall balance that is big and expansive without being too showy to make the more sensitive audiophiles on the planet run for cover. 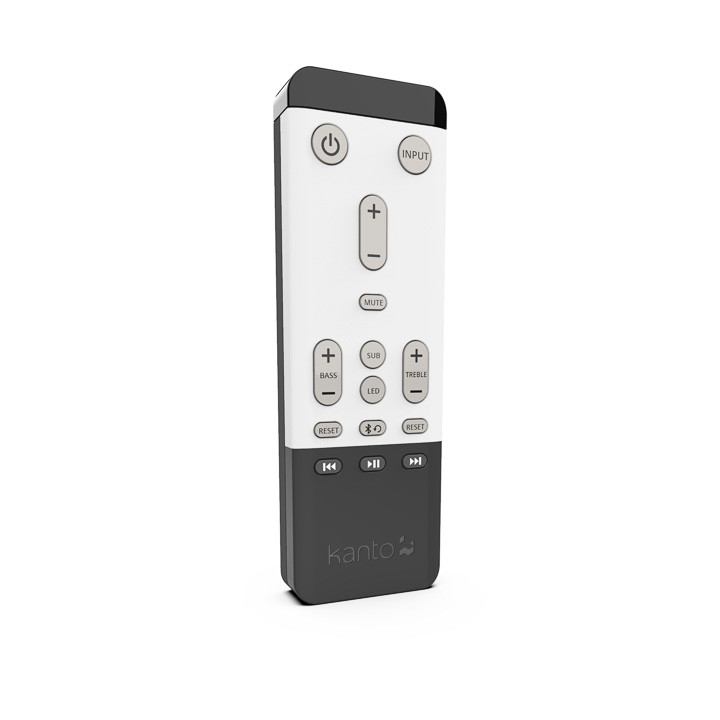 The speakers perform extremely well. The first thing that hits you about them is the bass. There is a lot of it, but it is not overblown, too fat, too obvious, or uneven. Like many speakers of its size, there is some thickening around the 80Hz mark to give the impression of bass depth, but the impact on the sound is mild and only really serves to make the sound seem that bit fuller and larger. OK, if you listen primarily to very pure female vocals such as Joyce DiDinato [Stella di Napoli,Erato], that slight lift might come over as a little too much chestiness, but for most listeners with most music, it’s just a good, big and clean sound, that’s fun to listen to.

Let’s not underplay the TUK’s hand, it’s got the audiophile chops. It’s more than just a big, bassy sound, and can give fine stereo imaging, when used on speaker stands. And they are fast, too. The combination of quick metal coned driver and notoriously fast AMT tweeter combine well here.

The TUK is also very unforgiving in performance, which is not a back-handed compliment. The TUK will have to play nice with a range of inputs that are not likely to have much in the way of audiophile snootiness, and the results might sound too compressed on conventional audio are absolutely fine sounding through the TUK. It won’t make the most compressed signals magically solve their problems, but the TUK is a lot less forgiving than a lot of its older-style rivals at its price and above.

Detail is perhaps ‘good plus’ rather than outstanding, but the loudspeaker goes instead for speed of delivery than sheer weight of information on offer. On balance, I like that position for the TUK, as it makes it all the more listenable, and I’d rather this sheer speed of delivery, than blandly listening to well-produced aural wallpaper replayed tiresomely, but with tireless detail.

The phono stage is perhaps the best example of this balance in the system. It is ideal for good turntables with moving magnet cartridges. I can easily see the TUK being used with a turnatble that costs roughly as much as the loudspeaker itself. Swap out that turntable for one that costs ten times as much and you won’t get the concomitant improvement in performance that you might expect to hear elsewhere, but in the context of the TUK, this all works together perfectly.

One of the tests many reviewers quietly run through their respective heads is the ‘would I?’ game. Would I recommend this to a friend or a family member? Would I buy one for a loved one? Would I be happy if I thought this was the dorm-fi of a son or daughter while at college. While there is no need to go all audio-proselytiser, there are still minimum standards that need to be maintained, and thinking of it in close friends and family terms seems more personal than ‘would I put my name to it?’ Besides, angry relatives can know how to punch and know where I live! 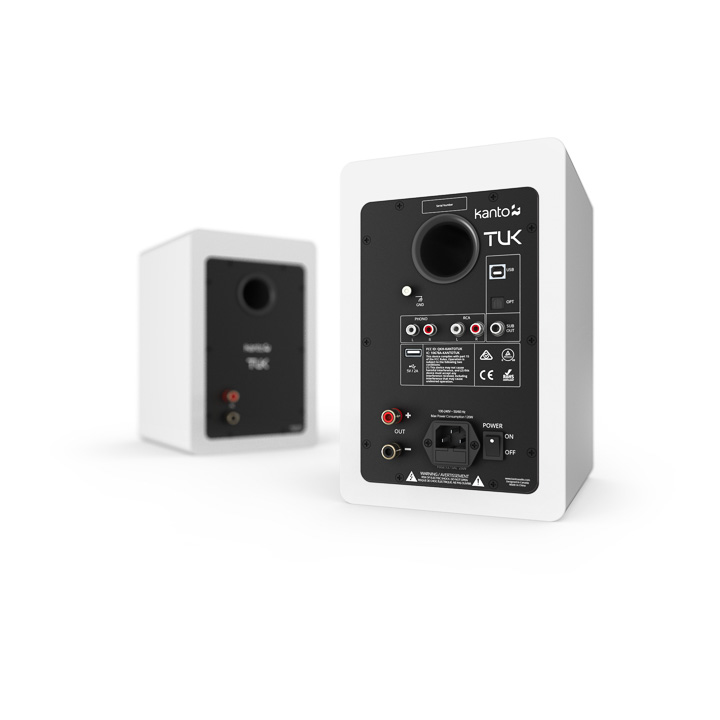 All this is a way of saying a confident, ‘yes’ to all the above. I would be happy recommending the TUK to a family friend. I would be happy with it being the dorm-fi system. It might be a tougher call talking about it in terms of a downshifting audiophile, wanting to swap out tens of thousands worth of equipment. I wouldn’t completely discount this speaker as a kind of extreme de-audiophiling, I think the downshifter is more likely to opt for ‘more of the same, only smaller’ rather than this level of change.

I was extremely impressed by the Kanto TUK. It’s a very professional package with a very big, very powerful sound for so small a loudspeaker. It doesn’t rely on a tweaked balance to deliver that sound, and the overall balance of both the performance of the inputs and the quality of the drivers is such that they all work in a kind of dynamic balance. Top stuff!

Auto power down: Yes (Can be disabled for Always On operation)

Auto power up: Yes (Can be disabled)