“You’re going to hate me,” says Gary Numan, when I ask him if he’s a hi-fi fan and what music he’s been listening to recently.

“I don’t listen to music,” admits the 63-year-old, electro-pop pioneer, speaking to me from the L.A. home he shares with his wife, Gemma, and their three teenage daughters, Raven, Echo and Persia.

“The kids listen to music all the time – our house is full of it. If you walk past Raven’s room you might hear Harry Styles or Ariana Grande. Echo might be listening to Nine Inch Nails or Lana Del Rey, and in Persia’s room it’s all hip-hop and rap. Gemma has music on all the time too, so my problem is trying to find a quiet place to think without f***ing music drowning me out!”

He adds: “I don’t listen to music in the car, or I don’t put the radio on – being in the car is when I do my thinking. When I’m not making an album, I like to have very little to do with music, but I do go and see bands – or I did do – so I get my fill of it from that. The idea of me being at home, putting an album on and listening to it? I haven’t done that for about 30 years!”

In 1979, London-born Numan, who has influenced artists including Trent Reznor of Nine Inch Nails, Lady Gaga, Beck and The Foo Fighters’ Dave Grohl, scored UK number one hit singles as both the frontman of New Wave band Tubeway Army (‘Are ‘Friends’ Electric?’) and a solo artist (‘Cars’).

It’s estimated that in the first two years of his career, he earned £6 million. He admits he spent a fortune on houses, Ferraris and planes.

Ironically, for someone who loves his vehicles, Numan’s latest studio album, Intruder – his eighteenth – is a concept record about climate change and the effect it’s had on planet Earth. Some of the lyrics also deal with themes that are linked to COVID-19.

“The album is my idea of what the Earth would say if it could speak – how does it feel about what’s going on?” he says.

“All of the songs are trying to find that voice, or a different feeling, emotion or slant on the same idea. It’s slightly pretentious and I’m not sure I got close to doing any of those things, but that was what I was aiming for.”

How have you coped with COVID-19 and lockdown?

It’s been harder for most people than it has been for us – we’re in a pretty fortunate position, as we have a big house and a swimming pool. If you’re going to be locked-down anywhere, then this is a pretty good place.

I’d hesitate to say that’s it’s been difficult for us, but, having said that, who wants to be locked-in for long periods of time?

My children have suffered considerably – all of them have issues that have come about because of COVID, or have been magnified by it. My wife has also been struggling – it’s definitely taken its toll – but I’m actually alright. I’m like an immoveable rock that just sits there – everything washes around me.

I’ve been lucky in that I’ve had things to do, like the album, and also a book to write [his 2020 autobiography, (R)evolution]. I’ve had plenty to keep me busy.

To me, it doesn’t feel like the world is massively different, but I haven’t enjoyed it. 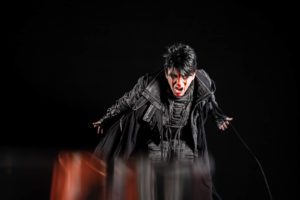 The sessions for the new album took place in your home studio and producer Ade Fenton’s studio in Bath, England. Was it all done remotely, due to living and working in the age of COVID-19?

We always work as if we’re in the age of COVID-19! We’re actually really good mates – he’s my best friend. We hang out when I’m in Britain and he sometimes comes here, but, from a working point of view, it’s all done remotely.

I write the songs here and then I work on them and build them up to a reasonable degree of production – that’s just to give Ade information. He can hear the song and know exactly what I’m looking for – the dynamics, the sound, the vibe, the tempo and the structure of it.

His job is to take that and somehow make it much better. He’s got a task on his hands, because I’m not particularly easy [to work with]. I can send him things because I know how I want it to sound, and he’s either got to make it a lot better, or, if he hears it going in a different direction, he’s got to convince me that it’s right.