Innuos is best known as the music server champion; the company’s ZEN line of dedicated media servers that are loved as much for their platform-agnosticism as they are for their excellent performance. They range in price from the reasonably-priced half-width ‘singing shoebox’ ZENmini Mk 3 (reviewed – with its optional Linear Power Supply Unit – in Issue 177) right up to the two box, cost-no-object Statement (reviewed in issue 168) and we have both liked every model and thought they were well-placed in price and performance terms.

The Innuos PhoenixUSB is a departure for the brand, in that it’s not a music server; it’s a USB reclocker. The PhoenixUSB sits inside Innuos’ half-size case (a form factor shared by the ZENmini and LPSU) on three isolating feet and has a single USB input, a lone USB output, and a three-pin IEC power socket. It performs a set of fundamental housekeeping tasks to the USB output of a host device and costs £2,249. While for many that might be an understandable ‘wait, what?’ moment (most USB housekeeping gizmos cost a fraction of that kind of price), in fact what the PhoenixUSB does is so fundamental to USB output that it justifies its place in the modern audio system, and does so at such a degree that those other ‘USB housekeeping gizmos’ are shown to be cost-cutting exercises in a truly high-end USB-based system. Perhaps more importantly, it allows the notion of a ‘truly high-end USB-based system’ without qualifications or compromises. 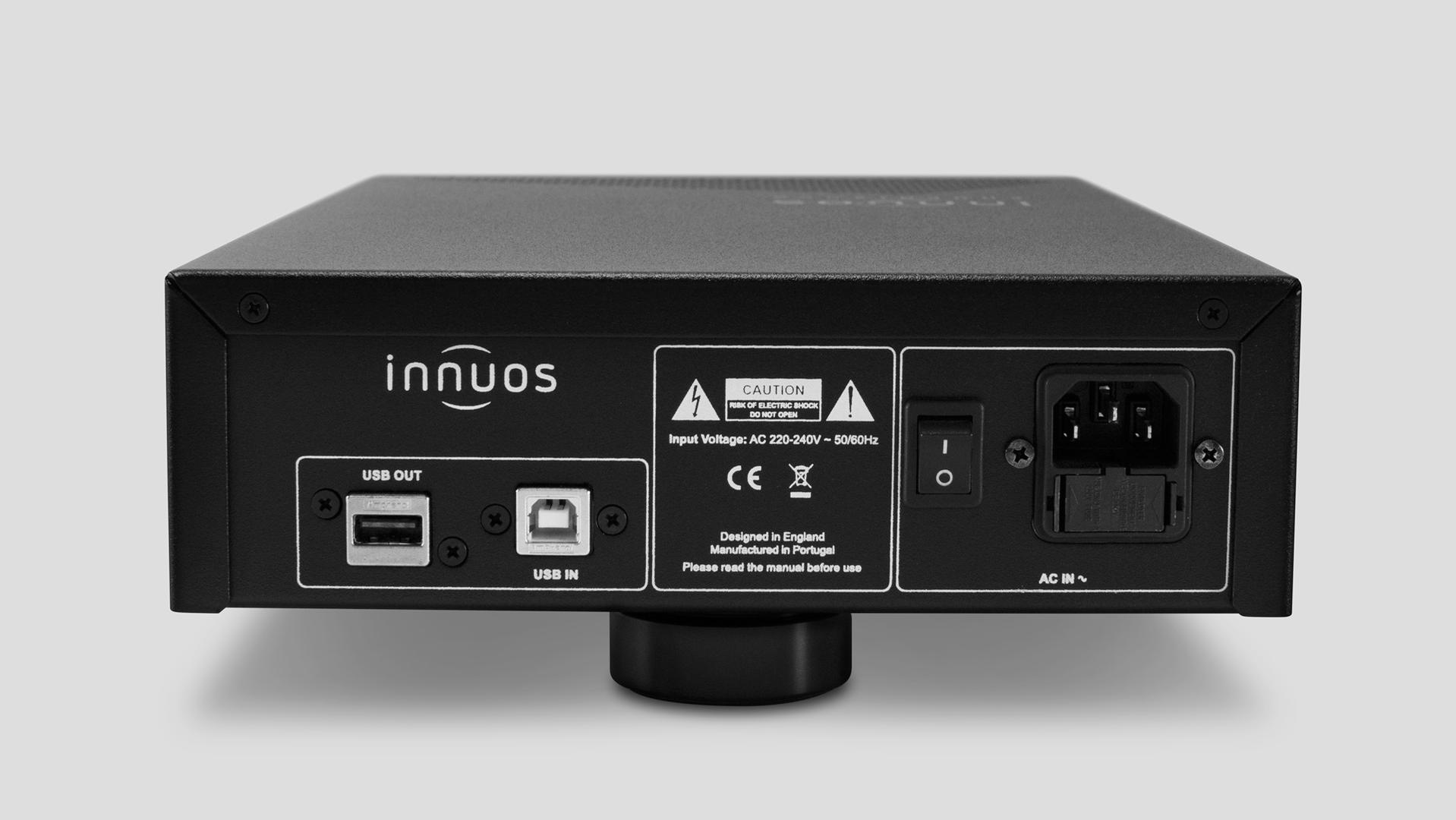 The first of those housekeeping features is the Innuos PhoenixUSB’s signal regenerator. Unlike most, this USB regenerator chip has no switching regulators and requires three distinct power supply feeds that are met by the comprehensive linear power supply, but even this is supplemented by three individual sets of regulator chips.

The next most immediate impact of that power supply is it takes over the 5V power rail within the USB chain. This has long been considered a source of noise to the extent where early USB cables actually cut, removed or physically isolated the 5V positive and negative conductors. They quickly stopped this because of the use of galvanic isolation in USB connectors (and the fact that – technically speaking – a USB cable without its 5V lines is not classed as a USB cable), but the problem didn’t entirely go away. Innuos giving this 5V line a quick spit and polish thanks to its linear power supply takes away a major source of noise that messes with USB controllers.

A second linear power supply feeds the OCXO, or Oven-Controlled Crystal Oscillator. This runs at precisely 24MHz (or at least to within three parts per billion of 24MHz, thanks to that temperature control) or put another way, talks USB like a native. It also benefits from being a short PCB track from the aforementioned USB regenerator chip, and not a whole box and several cables and connections away, as might be the case with an external 10MHz clock. Given that the physical distance and the 10-24MHz conversion required in such a case can only introduce imprecision in a concept that is designed to improve the precision of a digital signal, the PhoenixUSB holds the right cards for the right reasons here.

In other words, while the Innuos PhoenixUSB doesn’t perform any processing to the digital signals its handling, it treats the digital datastream to the kind of spa treatment and physical fitness regime to ensure it’s as good as it can get. Think of it as a sort of extension of the USB source’s host controller, ensuring that the host’s output is as clean and precise as possible before passing it to the DAC.

If you look at those three elements, you might conclude that there is nothing especially new in the PhoenixUSB, and you’d be part right twice over. You’d be part right because the PhoenixUSB is basically the reclocker board taken from Innuos’ Statement server (possibly the only USB-based device that doesn’t benefit from what the PhoenixUSB does for a living), and part right in saying all three (technically… four) of those basic functions are available in individual units. But if ever the phrase ‘the whole is greater than the sum of the parts’ rings true, it’s in the PhoenixUSB. Putting all of those USB signal management tasks in the same box, giving them the shortest possible PCB track distance and giving them all a linear power supply dedicated to giving each section its own correct power feed without the risk of one power feed clashing with the others makes the performance of ‘bitza’ rival approaches recede into the far distance.

I primarily used the Innuos PhoenixUSB with an old Mac Book Pro that has seen better days and a Melco N10 that is in its prime. Meanwhile DACs included the Métronome Audio Le DAC at the top end and an iFi Audio iDSD Nano at the other. Discussing the PhoenixUSB here is easy; it improved all of them, whichever permutation you chose!

While there are distinct – and beneficial – commonalities in the performance of the PhoenixUSB, much of its action is chameleon-like. It makes the best of whatever USB source it is fed and gives the DAC less of a hard time when receiving a USB signal. It doesn’t change the basic tonal, timbral and temporal characteristics of that USB host device; it just brings those tonal, timbral and temporal qualities out and gives them a very brisk polish. If you compare the performance of a computer-based (‘Mac and DAC’) system with a dedicated USB server, you can still hear the differences and – in most cases, I believe – you will still think the dedicated server is a better performer. It’s just that both of them have had their respective games raised by several notches. Why that is hard to describe in absolute terms is that the sonic performance of different computers and different USB-based servers are not uniform. While the PhoenixUSB will add body and substance to the comparatively thin and reedy sound of a six-year-old Mac Book Pro, it still sounds like the output of a six-year-old Mac Book Pro… just one that sounds way better than it ever did. As to the Melco, that also sounds better than it ever did too, with an even more elegant and immediate performance.

There are commonalities with whatever the PhoenixUSB touches (except for the Statement, of course). There is a sense of precision of detail and soundstage, with a marked increase in stage space in the latter. Music sounds more immediate and direct with the PhoenixUSB in place. Everything just snaps into focus better, and the layering of instruments in a soundstage more real and less ‘cardboard cut-out’ and this became especially clear on orchestral music; the sense of an orchestra playing Mahler’s Eighth Symphony [Solti, Decca] in an appropriate space was tangible, and removing the PhoenixUSB made that same orchestra sound ‘bunched-up’.

The downside isn’t really a downside at all. You plug the PhoenixUSB into your digital audio chain thinking ‘yeah, maybe it’ll make a bit of a difference… but not enough to justify the price’, listen for maybe 10 seconds, then kick yourself for making you spend £2,249. If you unplug it, you listen for another 10 seconds, then plug it back in and tell your source and DAC that you’ll didn’t mean it and will never hurt them in the same way again. That kind of level of ‘good’ is what the PhoenixUSB does so well.

OK… adding the Innuos PhoenixUSB to your ZENith Mk 3 will not transform it into a Statement. There’s more than just the reclocker and regenerator inside that two-box flagship, and that is reflected in the performance. But what it does is get close. This is a good thing, because an ‘all roads lead to Innuos’ product will disenfranchise many. Instead, the Innuos PhoenixUSB raises your USB audio signal – from wherever it came and wherever it’s going – out of the ashes of noise and imprecision. You might not think you need it; you might even think you’ve already nailed these problems with a collection of USB clocks and isolators… guess again. Do the 10 second test and discover the PhoenixUSB is the real deal

USB Regenerator: The USB chip regenerating the signal contains no switching regulators. All 3 independent voltages to the chip originate from an independent linear power supply with further regulation provided by 3 sets of LT3045 regulators

Linear PSU: Two independent Statement-level linear power supplies, one dedicated to the OCXO clock and the other used for powering the USB chip/ 5V USB line