On the face of it, there’s nothing obviously different or unique about the Gryphon StandArt racks – other than the unmistakably Gryphon aesthetics that is – although even those are sufficiently self-effacing to complement any number of different components. Which brings me to my first point: built by Gryphon and intended for use with its electronics, the StandArt racks work equally well (sonically and aesthetically) with boxes that come from other manufacturers – and work they do! Consisting of two main elements – support shelves, complete with massive angle brackets and the legs to which they attach – you can specify height, the number of shelves and how many bays you want.

Each upright is available in one of four heights, including short ones to suit amp stands. The uprights themselves are formed out of a figure-eight (or waisted oblong to be more accurate) aluminium extrusion, the central ‘bridge’ adding stiffness and creating two separate cells within each leg. The rebated middle section is drilled with a ladder of holes to allow users to select shelf spacing, either on one side or both, depending on whether it’s an ‘end leg’ or ‘Extension leg’. It’s a simple, elegant solution that means you can go on building sideways until your space or budget runs out. Add to that the fact that the shelf brackets are butch enough offer enough mating area and fixing bolts and lock securely into the groove in the leg and the result is a flat-pack rack that builds into the sort of massively rigid structure more normally found bolted to reinforced concrete foundations. But then, once you’ve built even a modestly sized rack, the differing grades of kiln-dried sand that fill each hollow in all four uprights make it feel like its bolted down anyway. For once the sand doesn’t leak and the large composite cones on which the rack stands make levelling it and locking it in place a straightforward process. 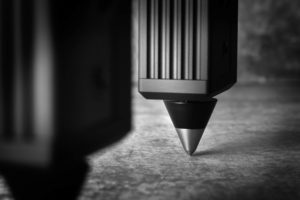 The shelves themselves are deceptively simple constrained layer designs, depending for their performance on carefully chosen and combined materials. The top surface is a layer of Kerrock acrylic resin/mineral composite material, bonded to a thicker substrate of HDF, using bitumen-based damping compound between the two. The result is a shelf that’s thin enough to be practical, stiff enough to support any amplifier known to man (yes – even the Mephisto) and handy when it comes to sinking and dissipating the mechanical energy generated by the supported components. The rigid upper surface offers an ideal interface for coupling elements that will further increase the stand’s efficacy. Residual low-frequency energy passes into the legs, and those sand-filled cavities do the rest. Simple, effective, massively rigid, easy to assemble or reassemble and suitably understated, the Gryphon StandArt certainly lives up to its name. But where things get impressive is once you put your system on the rack and fire it up.

One of the occupational hazards of the otherwise charmed life of a reviewer is the amount of time you devote to arcane activities like listening to racks. It’s an involved and far from a straightforward operation. Still, you quickly establish that not only do equipment supports make a musically significant difference, but each rack brings its own particular mix of attributes to the party. Over the years I’ve gravitated towards the warmth, stability and dimensionality of the HRS RSR and the clarity, neutrality and resolution of the Grand Prix Monaco/Monza. There are plenty of racks that cost more, but few deliver more balanced or consistent musical results. However, the Gryphon is one that does.