Some parts of your system that are somehow inherently less sexy than those big boxes or spinning platters – and chief amongst them is probably your rack. It’s not that what supports your equipment doesn’t matter or make a difference. I’d argue quite the opposite, with many an audiophile underestimating the importance of and under-investing in their system’s supports. It’s just that most of us simply want to make a one-time decision, preferably without spending too much time on it. Instead, we can get on with the serious business of listening to music whilst angst-ing about whether that new pre-amp you just read about would be the answer to all your system’s woes? Oddly enough, very few of us ever stop to consider that a decent rack might just answer a whole host of questions – but then I guess that’s my point.

Take that mindset a bit further, and it’s not hard to extrapolate an almost tick-box list of the desirable attributes required by any serious audio rack – before you even get to its sonic contribution. It needs to be sturdy enough to support increasingly heavy components (just in case we ever manage to afford those monster amps we really, really want). It needs to be adjustable/configurable (to make space for those monster amps we really, really want). It should be modular (just in case those monster amp are mono-blocs) and it should look good loaded with audio equipment. It’s incredible how many racks fail on this last criterion. They might look great when you see them empty but pack them with audio equipment, and they don’t look as good. The same applies to modularity and adjustability: changing stuff about in theory isn’t the same as actually doing it in practice. All too often it’s a case of fiddle and faff to get the thing put together and then leave well alone. I’ve often wondered whether the Quadraspire racks’ longevity owes as much to the fact that they work (in the mechanical sense) as it does to their sonic virtues. 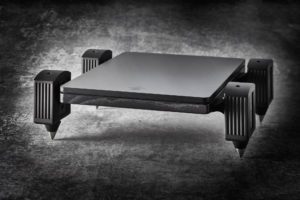 Of course, the bigger and heavier the equipment you make, the more pressure it exerts on your support solution (literally and figuratively). So perhaps it should come as no surprise that those practised purveyors of hideously heavy amplifiers, Gryphon Audio Design, have finally turned their attention to creating a rack system capable of accommodating, well… those monster amps that we all really, really want. Nor perhaps should it be any surprise, given that the company seems to be on something of a new product roll right now, that the rack they’ve come up with doesn’t just tick all the boxes, it does it in bold after adding a few extra boxes of its own. When you build something like the Mephisto – an amplifier that would bring the average audio rack out in a cold, shivering sweat – it tends to help you focus on the priorities.