That’s not the entire feature set however, as there is an infrasonic filter that works from 10Hz down. This tames warps and rumble. There’s also the option to switch phase and play mono releases in three different ways. You can even swap channels should the need arise. All of these options can be accessed by navigating around the display with a Gold Note system remote and clicking through the various parameters. The logic control is processor-driven, and is kept up to date with the occasional firmware update, and unlike a streamer (which inherently has internet access), the updates here require a bit of help with a laptop and USB cable. However, I performed an update and it went smoothly enough, and the processor never crosses paths with the audio signal. 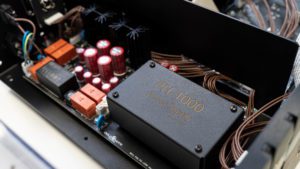 It naturally has more than one phono input as well, with two on RCA and one on XLR for MC only, so would be a perfect match for those inclined toward more than a single tonearm on their turntable. Output is via RCA and XLR again with a third output provided for Gold Note’s optional tube output stages TUBE-1012 and -1006. You can even upgrade the PH-1000 with an external power supply. Gold Note appears to have thought of everything.

In my system, and connected to the output of a Rega Aphelion 2 moving coil on a P10 turntable, the PH-1000 delivered rather engaging results, not least because of its remarkable ability to extract bass from nearly every slab of vinyl that the stylus traced. It’s not easy for a phono stage to do this at the same time as delivering a dynamic and well-paced sound but this Gold Note is a natural; it manages to sound relaxed whilst producing oodles of detail and avoids the common pitfall of leaning on the mids and highs to create a sense of speed. I got a great result with a recent re-release of Charlie Rouse’s Two is One [Pure Pleasure] where all the instruments are nicely separated yet the music retains a driving coherence that you can’t ignore. The drums, bass, guitar and sax are spread across the soundstage and the lead instruments really shine but there is no glare, often a problem with brass. The Gold Note even managed to reveal that some of the apparently less interesting tracks on this album were actually better than had seemed to be the case, which is the ultimate achievement for any audio component. 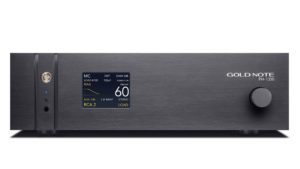 I loved the way that the power in the bass provided by this phono stage added space and body to familiar records, and not necessarily with bass heavy material either, it’s just that there is a lot of information at low frequencies that defines the acoustic of the venue or studio that other phono stages miss. The Gold Note really liked another jazz album in Charles Mingus’ Newport Rebels [Pure Pleasure], which sounded so real and vivid that you can’t help but wonder whether acoustic recordings on valve electronics were the pinnacle of the art. The fact that it’s a live performance is also critical, that and the quality of musicianship, you need the likes of Roy Eldridge and Eric Dolphy to get brass to sound this vibrant, and it doesn’t hurt having Mingus and Jo Jones in the rhythm section.

One feature I didn’t mention is ‘Enhanced’ mode which uses “proprietary technology inspired by the Neumann Cutting Lathe for superior dynamic and musicality.” This improved timing but also makes the balance a bit more forward/bright and ultimately, I preferred the relatively relaxed sound with it off. There was some experimentation with impedance settings too, initially this was set at the 100 Ohms recommended for the cartridge, but it was interesting to note how different options changed the sound. 1 kOhm for instance caused vocals to project further with a slight halo effect, but this also reduced depth of image and separation. 220 Ohms gave the impression of faster tempo and was quickly abandoned so that the beautifully restrained solemnity of Tord Gustavsen Trio’s playing on The Other Side [ECM] could be fully appreciated.