The law of unintended consequence is not always a harsh mistress. Take the Gold Note IS-1000 Deluxe integrated amplifier for example. Meant to be collected after the last review, a series of ‘locational complications’ (the polite term for ‘the courier kept delivering it back to the collection point’ style cock-ups) meant we retained the product long after the original review appeared in print; long enough to benefit from the latest round of software and firmware updates. The Gold Note IS‑1000 Deluxe was a good integrated amplifier when we first met it in Issue 175 and it’s a good integrated amplifier today. Physically nothing has changed – it’s the same physical product under test, with the same serial number… because it never even made it back to the factory, so hasn’t been upgraded in component terms. What’s changed is the ‘appvailability’, and a couple of firmware upgrades.

What’s changed is almost everything. 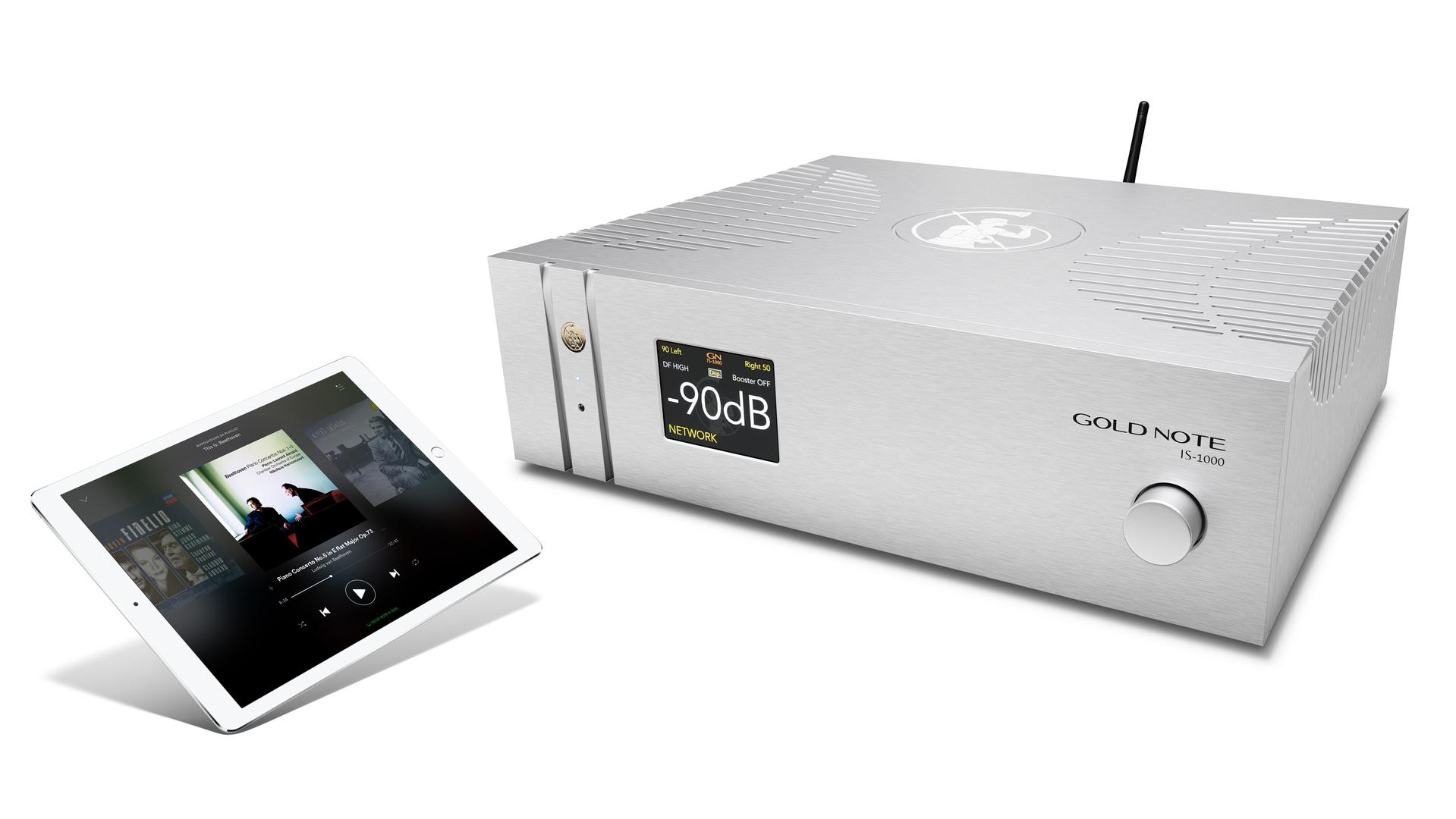 The all-in-one concept of the IS-1000 Deluxe is clear; it talks to online streaming services like Tidal, Qobuz, Spotify/Spotify Connect, and Deezer like a native speaker, and its Roon Ready standing, vTuner support and UPnP/DLNA network streaming/USB stick replay means almost all the quality post-CD stereo bases are covered. The optional DAC board connectes to USB and Ethernet with equal aplomb, and it supports MQA and even converts DSD64 files to PCM where required. Furthermore, Gold Note steps away from the ‘arms race’ here by opting for the quality Burr-Brown PCM1792A DAC chip (which supports files to 24/192 precision) instead of a numerically superior and sonically inferior chipset.

As discussed in the previous review five issue ago, power is Class A/B and rated at 125 watts per channel into an 8 ohm load, with nary an op-amp in sight. A function unique to Gold Note (I believe) is an adjustable damping factor – ‘high’ is intended for bigger, less sensitive speakers while ‘low’ (which Gold Notes claims enables the IS-1000 Deluxe to mimic a low-power valve amp) is for high-sensitivity/monitor-type speakers. Note that these are damping rather than ‘gain’ settings, so the IS-1000 is adjusting its power output to accommodate different loudspeaker designs rather than changing its volume ceiling to match more or less sensitive loudspeakers.

One of the two pairs of analogue RCA inputs is switchable between line level, moving magnet and moving coil – the phono stage circuitry is derived from Gold Note’s excellent PH-10 phono stage, but without that model’s control of equalisation and loading. With an additional XLR input, three digital optical sockets, a digital coaxial RCA input and a type-A USB socket, Ethernet and Wi-Fi (this supports Apple AirPlay (although not AirPlay 2 or Bluetooth). There are two basic models – the Classic (which includes a PCM1796 DAC) and this Deluxe model. We’d go with the Deluxe, even if there is a price premium.

As discussed, physically speaking nothing at all has changed. The amplifier is still the same solidly-built ingot of silver, gold or black, with high-grade connectors all round. And it hasn’t functionally changed the way it sounds, either. Although upgrades to firmware can radically shift the sound of products, there’s a good deal of ‘if it ain’t broke, don’t fix it’ here. The sound quality of the Gold Note IS-1000 Deluxe remains rich and satisfying in the midrange, with expressive vocals rising out of a wide soundstage. There is a tendency in audio circles to think every Italian designer spends their down-time gesticulating to operatic arias; it’s largely myth of course, but has a kernel of truth in that amps like the Gold Note make good opera sound wonderful.

If it simply delivered additional diction to hear Joyce DiDonato as she should be heard, I’d be OK with that, but the Gold Note IS-1000 Deluxe has the speed of attack and precise timing that set it apart from the masses. It’s refreshing to have an amplifier that can keep up with the back beats and Mach 2.0 grime on ‘Audacity’ from Stormzy’s Heavy Is The Head [#Merky] just as well as it can with the deceptively simple and gentle key changes of ‘Time Has Told Me’ by Nick Drake [Five Leaves Left, Island]. Reading back the review from issue 175, the phrase that repeats is ‘sure-footedness’; the Gold Note sticks to music like a mountain goat sticks to a hillside. 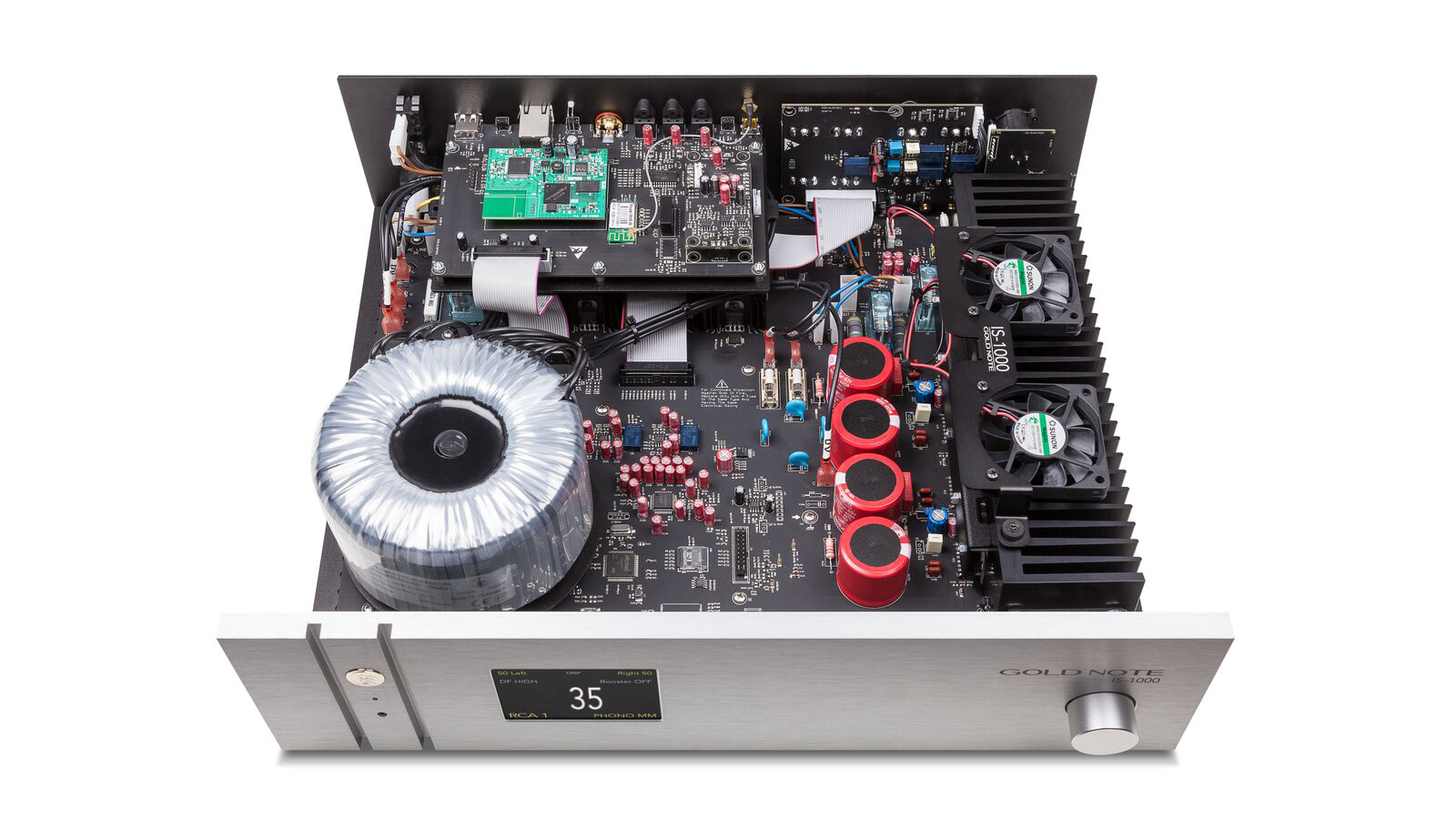 Gold Note provides a tidy app specifically for the IS‑1000, for both iDevices and Android. Early iterations of the IS‑1000 relied on the generic Mconnect streaming app, but the dedicated app brings a greater degree of amplifier control and integration to the table. The app has been available in the relevant app stores since late Spring 2019, and any owners of the Gold Note IS-1000 still relying on Mconnect are strongly advised to update both the app and the amp’s firmware; although neither is mandatory and one does not ‘unlock’ the other. It just seems odd not to have the latest software and the latest firmware, when there are no downsides to using either.

The firmware changes came about toward the end of 2019. They just seemed to make the integration between app control and the onboard streamer more direct, and that means it both is and isn’t transforming; the basic sonic performance of the IS-1000 Deluxe remains essentially unchanged – it’s still the elegant, open-sounding, detailed performer it has always been. There is a slight bit more ‘pace’ to the ‘grace and space’ sound of the DAC, but the difference is subtle and probably won’t turn the heads of the beat-obsessed (who only appear to be open to just one or two audio electronics brands anyway), but the rest of us get an amplifier that is that bit more beguiling, more refined, and more capable of providing the musical goods for unfatiguing hour upon hour.

The crucial change is in ease of integration and use. In the new millennium, hair-shirt products may have their place, but that is increasingly not the top slot. Instead, on the global stage, the winners are the products that make listening easier, both in terms of sonic performance and ease of accessing local and online streamed sources. The changes to the IS-1000 Deluxe make integration more seamless and makes access faster. In fairness, accessing online sources wasn’t exactly leaden before the updates, but the combination of app and firmware that came as an early Xmas present to Gold Note users gave the IS-1000 Deluxe a greater snappiness to musical access. Granted, we are talking the difference between ‘an eyeblink’ and ‘two or three eyeblinks’, but we are now so used to instantaneous access to material that ‘near-instantaneous’ seems ponderous. The change is noticeable.

In all, I’d give Gold Note’s combination of app and firmware a solid 8.5 out of 10, making it considerably better than most and on a par with the likes of Naim and Moon. Using Roon, Linn’s open-source system and AURALiC’s excellent (and suitably well-named) Lightning arguably pip these systems, and Sonos remains the apex predator in the app world.

If I’m honest about things, products like the IS-1000 Deluxe make a bit of a mockery of the whole review process. A review of the Gold Note amplifier taken early in its life will discuss the product in the context of an app that is completely different to the one used today, and as that app may form most of the way you interact with the Gold Note amplifier, that early review is almost completely invalid, and yet we live in a world of ‘exclusives’ where a follow-up six months later is lost in a sea of ‘now, now, now!’ reviews. The same applies to any streaming device. 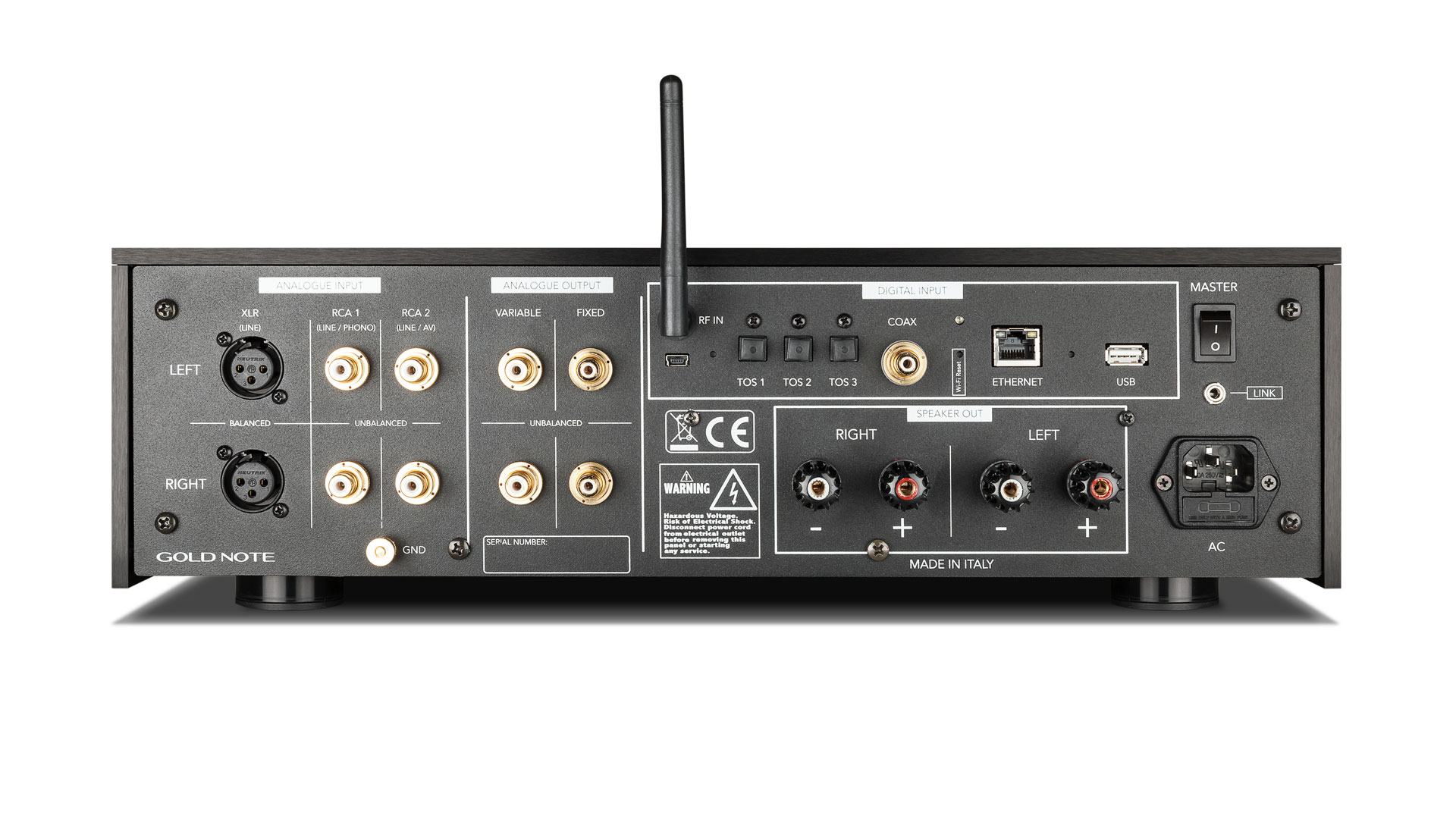 Regardless, the IS-1000 Deluxe is one of the many contenders for the ‘why do you need anything more?’ award that defines top-end integrated amplifiers. Amps like the Gold Note invite difficult questions when it comes to box counting; sure, separate pre/power systems offer more power, more dynamic range, sometimes better separation, detail and so on, but do so at a price – financially, physically or operationally. In the case of the Gold Note IS-1000 Deluxe, each baby step forward in app and firmware makes the move to separates less needed.

Distributed in the UK by: Audio Pinnacle