Fyne Audio is a relatively new kid on the hi-fi block, formed in 2017 by several former Tannoy staff, following the takeover of Tannoy by a conglomerate a couple of years earlier. They’ve not wasted any time, and for such a young company, Fyne Audio now has an impressive portfolio of products. However, that’s what you can do when your team includes five former directors and senior managers, including the former director of engineering, the manager of mechanical design, and the factory manager. Not to mention the former managing director and the sales manager. As Fyne itself puts it, it’s like they’ve got the band back together.

Conceptually, they remain committed to the traditional Tannoy-style co-axial arrangement of a tweeter mounted centrally within the bass/mid cone. Termed ‘IsoFlare’ this point source system is claimed to provide outstanding stereo imaging, even off-axis, because energy is radiated isotropically, following the flare of the driver cone. The drivers have undergone considerable technical development, including computer-designed beading around the outer rim, dubbed ‘FyneFlute’, to better manage the interface between the edge of the driver cone and the mounting point to reduce reflection effects. Finally, the porting via a tractrix profile vent in the foot of the speaker, which helps create a spherical wavefront from the port output, the better to couple the output to the room and aid overall coherence. 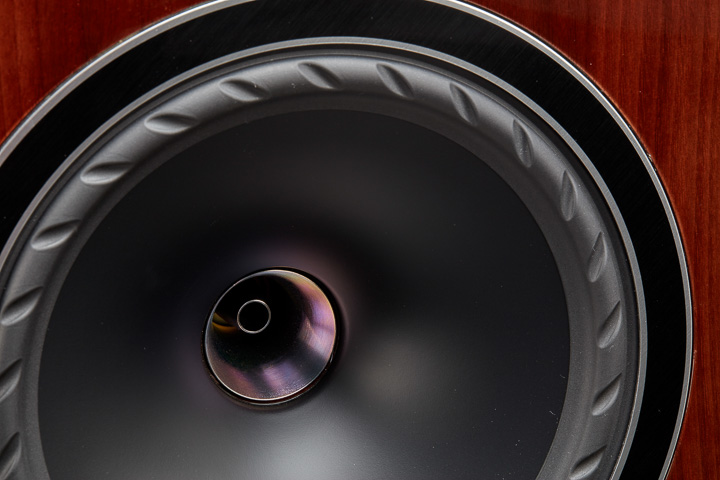 The F700 series sits one rung below the top-end F1 series, and the £6,000 F702 is a substantial two-and-a-half-way floorstander, sitting in the middle, between the F701 stand mounter, and the F703, a large floorstander configured like the F702, but with 250mm drivers in place of the 702’s 200mm units. The bi-wirable crossovers benefit from high-end components and have been deep cryogenically treated. Boat-backed cabinets and a slight downward slope to the top plate help manage internal acoustics but also reduce the sense of mass, and make for a singularly modern and elegant design. However, the 702’s are not a small loudspeaker, being more significant in all dimensions than my old Focal 1028s. There’s a passing resemblance to Tannoy’s much-admired ‘Definition’ series, but the F700 range has benefited from considerable development, which is apparent in the way it performs.

Given their size, and the generous proportions of the bass and bass/mid drivers, I was slightly concerned that they’d not work well in my modest domestic setting, but I’d also heard them absolutely singing their heart out in a small dealer dem room, so I wasn’t unduly worried, and Fyne themselves explain that one advantage of the tractrix port arrangement is less susceptibility to room placement issues. That said, they still amply rewarded a little bit of experimentation with placement; an inch or two this way or that and they quickly made themselves very much at home.

First impressions, then, and it’s pretty clear that the F702s are a very free and expressive loudspeaker. Don’t mistake ‘free’ for ‘loose’ here, either; there’s no sense of flabbiness, nor any lack of control, it’s just that control is being very judiciously applied. Dynamics are natural, unconstrained, and unforced, timbres have a real sense of texture and shape, and timing is right on the money. Andy Sheppard’s ‘Peshwari’ from Learning to Wave [Provocateur] shows his mastery of phrasing and textures; his lines follow a natural arc, and through the F702s it is easy to hear why he plays that way, and how essential those lines are to the musical experience.

The way the loudspeaker shows you the inner harmonies within the music is instructive too. As with timbre, pitch information is also exquisitely resolved; the music is just that little bit more fully-formed because the harmonies reveal themselves so limpidly. The F702 isn’t about bombarding the listener with impressive but ultimately meaningless detail either, everything in the music has its place and part to play — the F702s show you why, and throw in the quality of the musicianship for good measure. Coherence is critical here, and the top-to-bottom integration of the drivers is well sorted; there is no cause for concern about any disconnect or disjointedness between the frequency ranges. The detail is meaningless without context, and in this case, the context is the timing: unless the detail is delivered coherently, in a way which immediately locks it into place within the music, then it would be better if it weren’t there at all.

The speakers were in my system during the 50th-anniversary commemorations of the moon landings, so I dug out my copy of Brian Eno’s Apollo [Virgin] and had my little private celebration. Ambient music is sometimes a tricky reviewer’s tool, all that vagueness being a wee bit unhelpful, so I wasn’t expecting to get much by way of insight into the speakers; I was planning to wallow in Eno’s lush and evocative textures. However, the Fynes lit up the beautiful harmonic structures within those shimmering soundscapes, the bass and mid-bass tunefulness being a particular source of surprise and delight. Also, ‘Deep blue day’ has some compelling but understated work by the rhythm guitars; the Fynes found it and made sense of it where lesser speakers blend it in.

Time and again, they rewarded me with new insights into familiar music. Dhafer Youssef treads a line between jazz and world music and ‘Miel et ciendres’ from Divine Shadows [Jazzland] is an example where I usually wish the jazzman had come to the fore. The piece starts subtly, building and raising the energy to a critical point, then gently fades back from whence it came. I usually find myself slightly disappointed, because it starts to fade just at the point where the likes of EST would have stepped up a gear and taken us on a rollicking ride. This time, though, the trajectory of the piece felt so natural there was no sense of anti-climax at all. Graham Fitkin’s Kaplan [Black Box] is a dive into electronic music and initially feels somewhat different to much of his complex, rhythm-driven work. At 15 minutes long, ‘K1’ pays off in the last climactic few minutes, but the build has often felt a little diffuse and formless. Not through the F702s, though, which brought out the inner rhythmic structure and rendered the whole thing compelling and propulsive. Now all the subtle rhythmic changes fit so well and made much more sense of the whole recording.

Pulling out my copy of the Tord Gustavsen Trio’s first album, The Ground [ECM], I found ‘Tears Transforming’ is full of his trademark subtlety, but through the F702s the degree of interplay, the way thematic and rhythmic fragments passed between the musicians, was shown in ways I’d either totally forgotten or, more likely, never consciously appreciated before. Energy and detail on a micro- and a macro-scale is very much the F702’s forté (and piano), from small inflexions and gestures to large scale grandiosity, or merely pinning you in your seat (thanks, Return to Forever). All is achieved with considerable aplomb – you perceive the results, but don’t notice the work.

That goes, too, for large scale orchestral works, for which Rachmaninov’s Symphonic Dances surely measures up. In this case, Vasily Petrenko’s account, with the Royal Liverpool Philharmonic [AVIE], and in particular the ‘Non allegro’ first movement. The scale and weight of the musical forces in play was never in doubt, nor the size of the acoustic space offered by Liverpool’s iconic Philharmonic Hall. However, despite that, there was a clear dance-like quality to many sections, particularly in the way the upper strings tripped along over the solid brass, percussion, and woodwind underpinnings. By contrast, Brahms’ German Requiem and the London Symphony Orchestra under Previn [LSO Live], felt almost intimate; the orchestra and choir occupied their own definite spaces, but spaces somehow smaller than I’d expected. Having reflected on this, I’ve concluded that the sense of intimacy was more about the ambience; in a live performance there is that sense of shared space, even in a large hall, and here it was possible to feel oneself closer to the event.

The Fyne Audio F702s are all about insight; it seems. That view into the music-making which we almost take for granted at live events, but often struggle to recreate in our own homes. Yes, it’s about detail and resolving power, timing, and the ability to scale from intimate to expansive, subtle to bombastic; but above all, it’s the ability to do it in a way which doesn’t draw attention to itself. The music speaks, and a fine (pun intended) system does its best to get out of the way. The F702 is a tremendously accomplished loudspeaker, and given that Fyne Audio is such a young company, this is a truly remarkable achievement. It just shows what years of collective experience can do when given their head.