A couple of issues ago, we looked at the latest in the Classic line from conrad-johnson’s power amplifier range. At that time, we focused on the SE versions of the Classic Sixty-Two and Classic One-Twenty. These feature hot-rodded versions of the standard models, with KT120 power valves in place of the stock EL34s. We almost skipped over the standard versions, little knowing that decision would come back quickly in the shape of the CAV-45 control amplifier.

The standard version of the Classic Sixty or Sixty-Two power amplifier forms the basis of the CAV-45, to the point where the CAV-45 could be considered one of those stereo power amplifiers with a three-input line stage attached. This isn’t exactly the case because where the power amplifiers push their power tubes to deliver a healthy 60 watts per channel, the CAV-45 delivers – as the name suggests – just 45 watts per channel from the same basic tube layout. If you compare the casework of the control amplifier with the similar power amplifier, you notice less substantial power transformers, which leads to a less substantial weight and more even weight distribution. 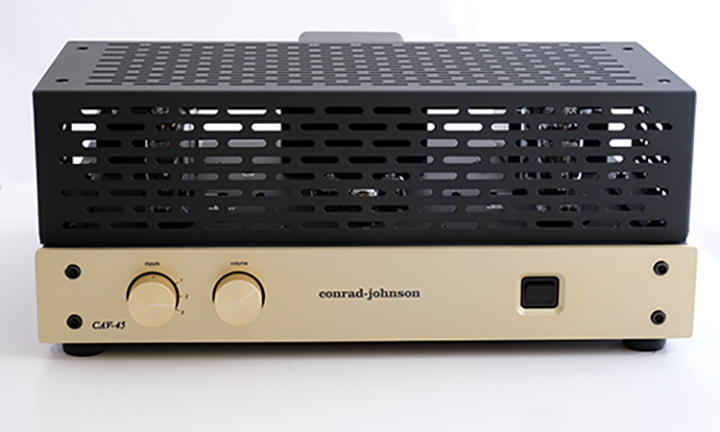 The CAV-45 is perhaps the ultimate in minimalist integrated (sorry, ‘control’) amplifiers, in that it has a power amplifier with a volume pot and a three input rotary selector where the power on LED usually sits. These ’preamp’ stages are entirely gain-free, making this a power amp with built in passive stage. Balance control? No way. Remote control? Try using a stick. In fact, rather than a power amp with a passive preamp, think of the CAV-45 as a power amplifier with three switchable inputs in place of the single preamp input, and a potentiometer in between that input and the triode-based voltage gain. This means you can run longish interconnect cables, but overall output is relatively low.

The other great advantage to this arrangement is it’s incredibly low noise, up (should that be ‘down’?) there with high-performance standalone passives like the Townshend and MFA designs. This fits well with the conrad-johnson’s ethos that rejects the idea of an ‘integrated’ in favour of a ‘control’ amplifier. While for most people, a control amplifier is an archaic way of describing a preamplifier, conrad-johnson like to place some distance between a device like the CAV-45 and most integrated amplifiers. The company feels most integrated amps throw the baby out with the bathwater, eliminating key features and better quality components (in the process sacrificing good sound) just to make a cheaper product, or to have fewer models in the line. Rather than paring down the quality too far, the CAV-45 eliminates the need for potentially sonically deleterious long interconnect cables between preamp and power amplifier. Although, in going down the passive route, long cables are off the radar anyway. In fairness, the unique construction of attenuator after the input of the power amp means there can be longer cables between source and amplifier than if there were a passive preamp in the system. You need a device of sufficient gain and output impedance in order to use cables of 1m or longer, however. Eliminating the line stage – especially a c-j tube line stage – also has a direct benefit in that the output at the loudspeaker terminals is in absolute phase (c-j preamps typically invert phase).

The power amplifier stage itself has two 5965 tubes as input driver double triodes, a lone Electro-Harmonix 6922 as phase splitter and a pair of matched Mullard EL34s per channel. The double triodes need no precise biasing, whereas there are bias adjusters and red LEDs for each EL34 on the top plate. These can be accessed through the screw-on protector grille, using the supplied long piece of plastic screwdriver. The protector grille has a knack to it, if you want to attach or remove it – work from the back, because you get good visibility there.

Its look is like many c-j devices. That may or may not be a good thing. It’s good because unlike every modern brand, its ‘today’ products perfectly match classic products of yore. It’s not because that begins to look a little dated. The brushed gold front panel, with black crackle rear and sides, is classic conrad-johnson. But it could do with some finishing touches. For example, the exposed transformers look a little too ‘businesslike’ in this case and some kind of casing would give this a more modern, and more expensive look. Also, replacing those relatively cheap 4mm binding posts at the rear of the CAV-45 with something more upmarket might not transform the performance, but it all aids to perception of the product itself. Unfortunately, that matters.

None of this matters to the sound (although some might argue cheap speaker connectors undermine performance), but it’s little touches that make the difference. Even the lack of a little power-on LED on the front panel will upset a few, albeit only marginally.

Unlike the last c-j amplifier we tested, the CAV-45 didn’t need a lengthy run-in period, and as this amplifier holds to Sircom’s Law of Thermionic Proportionality (which states that the operating temperature of an amplifier is in direct proportion to the outdoor temperature) this came as a nice surprise. It takes about 15 minutes or so from cold to sound great, but didn’t seem to need much more in the way of extended run-in to come on song.

The first thing that will strike you about the CAV-45 is its midband. Generally, c-j amplifiers have a richly deserved reputation for making good amps with great midbands, but among this select brotherhood, the CAV-45 stands out as a little bit special. It must be the absence of active gain stages, but it makes anything with an open sounding midrange come to life. Kat Edmonson’s ‘Lucky’ [Way Down Low, Spinarette] is always crisp and clean, but her gamine charm and quirky vocals sound, well, just lovely. The smallest details are resolved with effortlessness and no small amount of charm. You’ll be drawn to tracks that highlight that midrange beauty. And it is ‘beautiful’; open, liquid, insightful, and surprisingly crisp. 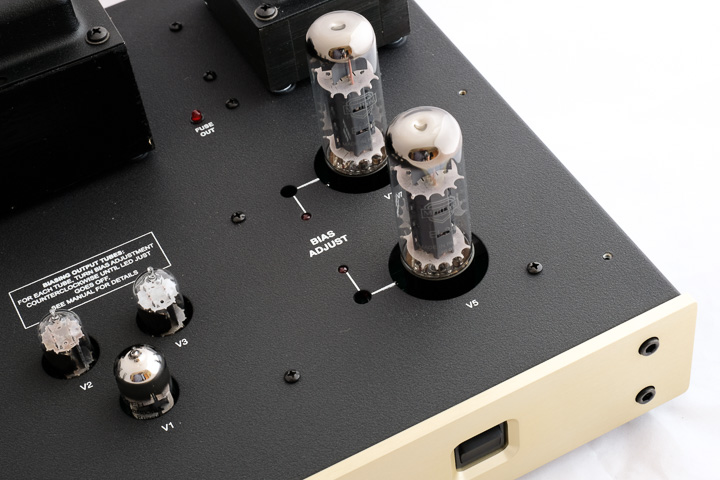 Eventually (and given the need to play breathy girl singers to highlight that midrange, ‘eventually’ might be more accurate than it first seems), you will play something with a touch of bass, and the degree of bass heft will surprise you. There is a lot of bass going on here, with considerable depth and precision. This could be a touch of ‘euphonic’ going on, as an amplifier like this is unlikely to be partnered with full-range loudspeakers, and on smaller loudspeakers this bass is just the right side of bloom. It is surprisingly deep, and comes across as creating a full and solid underpinning of sound. It’s an adroit and very melodic and harmonic bass, rather than an overly rhythmic presentation: more precise upright bass plucking of a Ron Carter than John Entwhistle’s percussive assault on an electric bass guitar.

This all being said, I’d suggest the high-frequency performance of the CAV-45 is perhaps ultimately where it best defines the c-j characteristic performance. The treble is extended, detailed, and accurate, but the absolute opposite of ‘aggressive’. It’s not laid back in conventional senses, but instead natural and sympathetic to the music. This, coupled with that liquid midrange,  and deep, melodic bass creates a sound that never once ruffles feathers, but is not dull or uninteresting. It’s not a forward sound by any stretch of the imagination, and this might weigh against c-j in pursuit of the increasingly tipped-forward, bright sound many seek from their audio. But there are many of us who reject this kind of enforced immediacy in favour of something altogether more musically satisfying and natural sounding.

There is a final feather in the CAV-45’s cap – its sublime imagery and soundstaging properties. This is an amplifier that lends itself to making a fine, open, almost holographic stereo, with all kinds of music. I listened to Anouar Brahem’s ‘The Lover of Beirut’ from The Astounding Eyes of Rita [ECM] and the sense of space and dimensionality the CAV-45 gave to the already spatial recording made it almost sound like new.

It’s difficult not to like the melodic sounding conrad-johnson CAV-45, unless you are wedded to a remote control, or are somehow allergic to the idea of passive amplification. Personally, I’d take low noise and better sound over immobility and ideology every time, and this ‘control’ amp comes firmly recommended.