Are you starting to see a pattern here?

Now, Chord Electronics completes the group with the Anni integrated amplifier and it’s goal is the same as the Qutest and the Huei. All three share the same form factor, a ‘none more black’ solid rectangular box with finger indents for the colour coded ball-like push-buttons that form most of its operational actions.  Aside from the knob on the front and the absence of a glowing blue window on the top (Anni uses perforated holes to dissipate heat instead) they are almost identical and they look good laid side by side. Anni also includes a power feed to the Qutest and Huei and if you are using all three, a (modular) Qutest System Stand (QSS)  that allows stacking. Given there were just two products in the range until now and the Anni has just the two inputs and no preamp outputs, don’t expect many more additions to the range.

Anni also explains why Chord Electronics’ small army of personal audio users scratched their heads at the omission of a headphone amp section in the Qutest… it’s here in the Anni. Anni gives you the choice of 3.5mm and 6.35mm jack sockets on the front panel. These are not independently controllable and there is no balanced output option, but the Anni is not directed toward the seasoned headphonista, more someone who wants to extend their desktop system into something more potent. To that end, I suspect there will be a lot more Qutest+Anni combinations sitting next to a computer on a desk than there will be full-stack Qutest+Anni+Huei as a small replacement for a domestic stereo system. Not that the Anni isn’t capable of such a replacement, just that the lack of remote and relatively low output weigh against it. 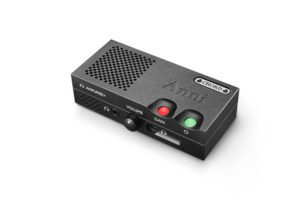 Anni may be small, but don’t be fooled… there’s a lot of ‘clever’ inside that small box. We’ve been charting Chord Electronic’s move to its ULTIMA amplifier technology for some time now (since the Étude from 2018 in fact, which we reviewed in issue 168). To recap, this is a dual-feed-forward error-correction amplifier circuit topology based on a paper by Dr Malcolm J Hawksford’s (emeritus professor at Essex University), and the resultant design was developed in the 1980s by Bob Cordell of Bell Labs. Cordell’s design had a then-unprecedented 0.001 per cent total harmonic distortion at 20kHz. It does this by intelligently adjusting and compensating for the individual linearity of the output devices. Unfortunately, this degree of compensation placed the circuit out of reach for designers in the era of Big Hair and pastel-coloured suits with rolled-up sleeves. The amplifier circuit all but disappeared as a result. However, Chord Electronics’ secret nerd-cave beneath that Pumphouse in Kent is a treasure-trove of forgotten audio papers. Chord Electronics saw the value in developing this one, and the ULTIMA range was born.

Anni shows just how scalable that ULTIMA circuit can be. The bigger ULTIMA stereo and mono amps can pump out up to a little more than one horsepower per channel and do so in a big chassis. Anni goes in the other direction, delivering a more modest 10W per channel into eight ohms. However, in a small setting with moderately efficient stand-mount speakers operating in the near-field, 10W is comfortably loud, and the Anni is deceptively powerful. Once again the absence of remote control tends to make the Anni one of those products that stay at arm’s reach. That generally means ‘desktop’.

In fact, Anni includes a two-stage ‘Gain’ setting on the top panel, next to the power button. Press and hold the Gain button and you switch the amplifier between high and low gain. This is useful because the volume control can be either too sensitive or too insensitive when mismatched with the loudspeakers. If it is either of these things, a two-second press of the gain button and the glowing button flips between blue (for low gain) or red (for high). The moment you plug in a pair of headphones, however, the amp defaults to low gain; the button glows purple if in the high-gain mode for the duration.

Colour-coding has been a thing with Chord Electronics since the original Hugo DAC, and that continues with the Anni. Alongside the blue/red/purple Gain button, the power button glows green for power-up/headphone mode, red for standby and cyan for regular operation. The volume control doubles as a channel selector, with the ring of LEDs changing from blue (input one) to red (input two). The ring of lights does not change to denote volume level, however. Finally from the front, inside the ventilation holes on the left-hand top and front, there are red and green LEDs running whenever the amp is powered up (irrespective of settings; they are diodes, remember, they are doing diode stuff and happen to be doing it from a position of light-emitting). There’s also an echo of the blue or red LEDs from the front panel. If you add in a Qutest and a Huei, you get something of an undimmable Christmas tree of an audio electronics rig, but in truth, unless your audio equipment is in your bedroom, it’s not obtrusive. In an ideal world, however, I’d opt for a ‘lights off’ option, or at least a significant reduction in lights on show in standby. No biggie, though.