This is not our first rodeo with Burson Audio. If they even have rodeos in Melbourne, Australia, where Burson Audio is based. We looked at the HA160 headphone amp in Issue 79, and the original Conductor – complete with matching Timekeeper amps in Issue 105. Of these products, the Conductor was perhaps the most impressive in performance terms, so when the time came to look at it’s latest guise – the tricked-out, Conductor Virtuoso 2+ (‘V2+’) – we jumped at the chance. It more than lived up to expectations, too!

The Conductor V2+ is no simple step-change. It’s a root-and-branch rebuild of the concept from scratch. The basics remain unchanged – a silver box with two analogue single-ended, and three digital connections (coaxial, optical, USB). There’s a good, clicky volume pot behind the front panel and a blue LED volume readout, which is a pig to read unless you are staring right in front of the Conductor V2+.

There’s a palpable sense of solidity to the build. It’s… stocky, not in the modern euphemism meaning ‘fat’, but in the old, original meaning, the kind that everyone in The Godfather(except possibly Al Pacino) did so well. The square thick top panel, held together with large Allen bolts gives it a powerful, commanding weight that bespeaks of quality. 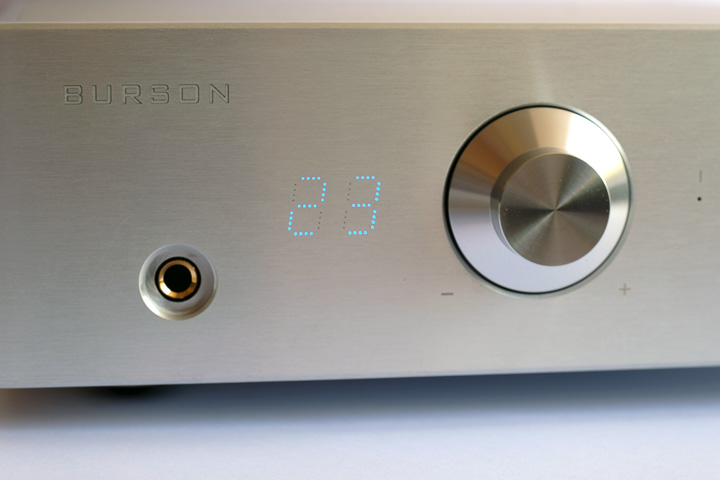 Quality extends deeper than just the case. The entire circuit has been redesigned, and is now based on Burson’s V6 SS op-amp, which Burson thinks is the best sounding audio op-amp in the world. In fairness, if you get to designing your own op-amps, you get to be proud of them.

The Conductor V2+ also uses tighter-wound transformers than before, tighter even than most brands. These custom high-density transformers supply twice the power of previous Conductor products. Also, while still a pure Class A designed with FETs (Field Effect Transistors), Conductor V2+ fully utilises the two 70W transformers to output over 8200mW per channel into 16ohm. Just over eight watts will comfortably drive the toughest headphone in the world.

At the heart of our Burson’s new volume control is Burr-Brown’s flagship analogue PGA2310. It offers a set of impressive specifications, including 120dB dynamic range and 0.0004% THD @ 1khz. The PGA2310 possesses two main components; a set of resistor networks and an op-amp output stage. The resistor network allows for 0.5db steps of fine control with channel matching within 0.05%. Compare that to conventional motorised volume controls which can only match channels to 7-10%.

Burson claims the ESS Sabre32 DAC to be “the most expensive and highest performing DAC chip in the world”. For the new Conductor V2+, Burson completely redesigned all the support circuits around the Sabre chip in order to improve overall performance. The new output stage of the DAC has been improved thanks to the company’s latest V6 SS audio op-amp. Pure Class A, the new output stage with its V6 op-amp is claimed to be able to “reveal micro-dynamics that others can only dream of”.

Burson also uses the flagship XMOS six-core USB module on the Conductor V2+, which allows for 32bit 346k sampling and DSD 256 streaming and an extremely high level of connectivity with both computer and mobile devices. The Conductor V2+ implementation employs a triple low-jitter clock structure for strong jitter correction.

What hasn’t changed in the move from Conductor to Conductor V2+ is Burson’s commitment to tank-like performance criteria in shows. This remains one of the best made devices you can buy, especially at the price. Everything is solidly built and works together as one.

Like its predecessor, the Conductor V2+ includes a pair of line level analogue inputs, three digital inputs, and a choice of variable output to a power amp or fixed DAC output to a full amplifier. If you go this route, the volume control still works to drive the headphone socket. The five inputs are controlled by touch buttons on the front panel. Then there’s the volume display to contend with. This is a good idea in theory, with the blue LEDs hidden behind precisely drilled holes on the front panel, however, the panel is so thick, they essentially disappear unless you are staring right at the LEDs. This works on an aesthetic level, because the front panel is smooth and the display subtle, but I’d go with less style and more readability.

The last iteration of the Conductor came with a range of DAC options, but this proved more confusing for many (myself included). The latest Conductor is more simple in approach; whether you buy a Conductor V2 (which doesn’t have a DAC) or a V2+ (which does). We tested the full V2+.

I really liked the original Conductor, but this shows just how far the company has come. This is a more mature product from a more mature brand, and it shows. The Conductor V2+ is a beast of a headphone amp, in a good way. It can drive practically everything (to the point where more sensitive headphones have some slight gain issues (you have to treat the volume dial with care if you don’t want to deafen yourself, and there’s a slight amount of hiss when playing quiet music at low levels). Through every headphone, however, the Burson Conductor V2+ is always authoritative and stentorian. There’s a tremendous grip over the music that makes headphones sound bigger than they are, but not in an inaccurate, mellifluous manner. Just through sheer grip, especially in the bass. I used a motley collection of headphones from the great (LB Acoustics 3.2) through the good (Sennheiser HD 660 S) to the reasonably hard to drive (a classic pair of HiFiMAN HE-500s) and more. No amplifier is the ideal model for all headphones, and there will always be high points and low points as you plough through a room filled with headphones. But the Conductor V2+ has a better hit rate than most. That’s a big step in the right direction.

This amp copes with all kinds of music too, I played everything from 1920s Jazz [Louis Armstrong, ‘West End Blues’, Hot Fives and Sevens, Okeh] to Infected Mushroom crunking up acoustic guitar [‘Becoming Insane’, Vicious Delicious, BNE] and all points in between. The Burson didn’t favour one side over the other, keeping the surprising dynamics of a trumpet recorded 90 years ago, while handling the driving rhythms of Infected Mushroom (‘driving rhythms’ they may be, but don’t drive and listen to Infected Mushroom at the same time, or wave goodbye to driving for a few months!). In fact, the purity and impact of Armstrong’s opening salvo on ‘West End Blues’ was surprising, given I’ve been listening to that track time and again for years.

Beyond the grip on the bass, though, there’s a sense of refinement and at the same time a lot of detail on offer. Those two don’t normally go hand-in-hand, but the combination is as sweet as it is well received.

There’s so much to like here; from the five-year warranty to the way the detents on the volume control feel under your hand. This is a very well realised headphone amplifier/DAC that shows just how professional Burson Audio has become, and the last round showed the company wasn’t exactly goofing around. The Conductor V2+ is beautifully made, can drive practically everything, sounds powerful and full of bass while staying lithe and detailed, and the only real fault I can find is those damn blue volume settings. The original was a real star; this one’s a supernova!