As long as records have been stamped out of vinyl, warps and irregularities in their supposedly flat surfaces have been a problem – and devices claiming to deal with the issue are nearly as old as records themselves, whether by clamping the disc or flattening its recalcitrant curls. Just as clamps vary from simple, centrally mounted screw down or reflex designs that anchor to the central spindle, through peripheral rings, to vacuum-based systems, so flatteners span the range from a couple of sheets of glass that you slip the offending disc between before sticking it in your oven all the way up to sophisticated, self-contained devices that essentially do the same job without delaying the family roast. Perhaps the best known of the latter gadgets are the Orb (costing around £1,000) and the various Furutechs (the current DF-2 weighing in at close to £2,000) substantial devices that fulfil the fit and forget model: insert the disc, start the machine running and return several hours later to a – hopefully – perfectly flat record. And the AFI Flat might just be the best of them!

AFI (which stands for Audio Fidelity Improvement, the brain-child of audiophile and engineer Dr. Ulrich Kathe) has but one product – the Flat, a record flattener that raises both the aesthetic bar and the asking price for such devices? Weighing in at a substantial £2,695, the Flat is a slim-line device of beautiful lines, elegant operation, classy finish and an unavoidably large footprint. Built in Germany, the shiny surfaces look great and are easy to clean. It has a simple LCD display and four flush buttons to control operation. These are magnetically actuated (AFI supply a metal capped pencil, but alternative devices work) ensuring that there are no moving parts or surface films to fail over time. Open the glossy black lid and the underside is shocking scarlet, a red and white dot pattern on the exposed bed indicating the position of the disc to be dealt with. The Flat sandwiches the disc between two thick, white, felt pads. These serve several purposes, self-adapting for different disc thicknesses, ensuring even heating of the disc but also meaning that the record isn’t compressed between hard glass surfaces that risk embedding any surface detritus. Even so, AFI instructs users to clean discs thoroughly before use, which is sensible and practical advice: after all, who’s going to buy a record flattener before they’ve bought a record cleaner? 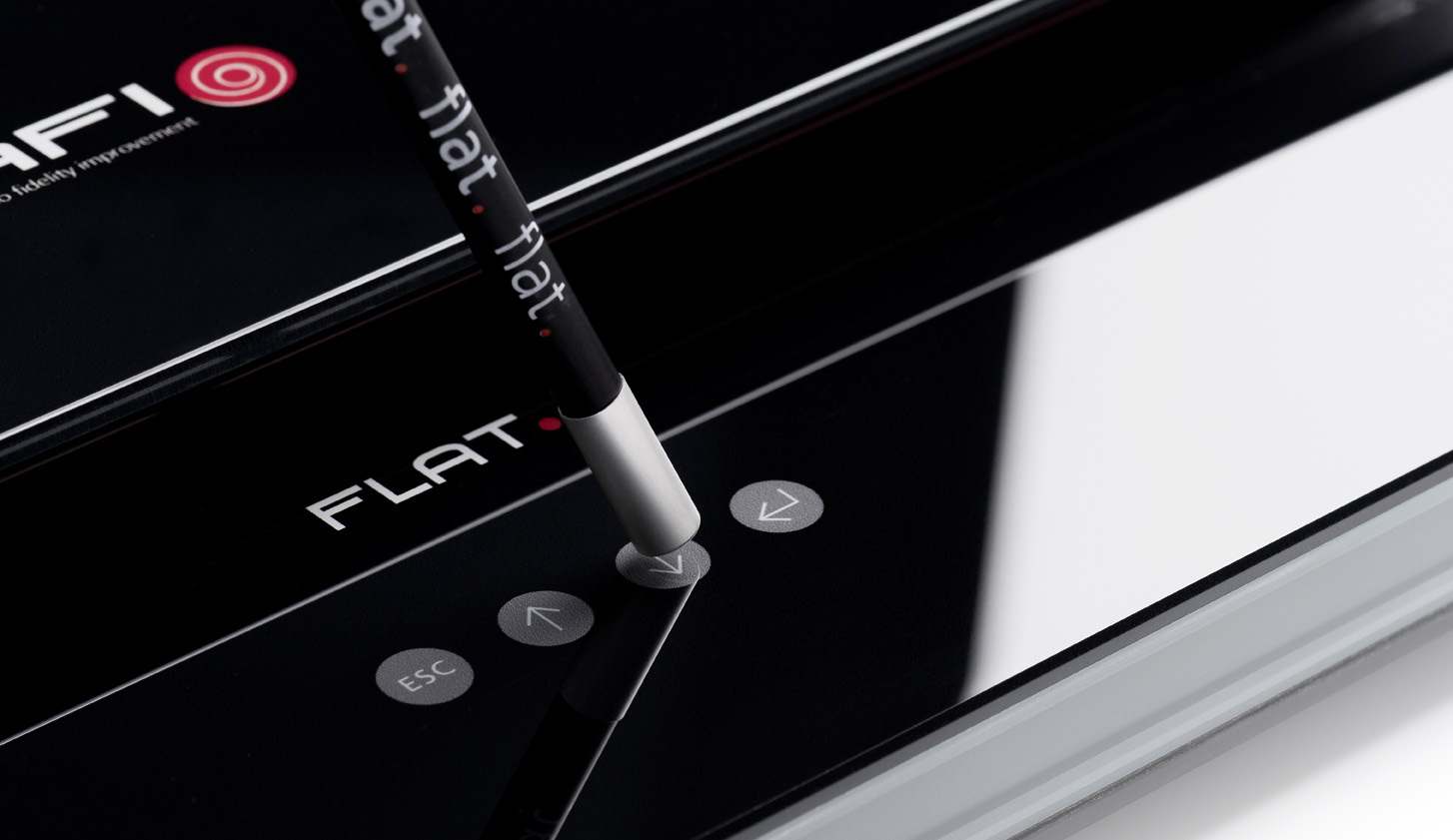 Once you’ve placed the offending record between the two felt discs and shut the lid, the start up cycle is going to need the manual – not a bad thing as, along with the magnetic actuation, it ensures against accidental operation. Set the machine running, leave it for the requisite four hours and return to discover a beautifully flattened record. If you want the technicalities then the Flat uses heat foil elements to slowly raise the disc temperature to 59 degrees before gently cooling it again in a drawn-out but precisely controlled cycle. And it works – pretty much every time. Only in one case (a viciously rim warped mid-1980s pressing that literally launched the stylus if you tried to play it) did I end up having to flip the record and repeat the process. Result? You could still see the stylus wobble as it traversed the previously warped section, but the record played without any other mechanical or sonic effect. Bottom line: it’s extremely pretty and very good at flattening records – better in this respect than the other units I’ve tried.

So, flattened records at a single pass, which is exactly what it says on the (far from inexpensive) tin. And if that was all that the Flat did then it would be little more than an extravagant curio, but it’s not the flattened records that make it so interesting. As well as the ‘Standard’ flattening programme, the AFI also offers a second ‘Relax’ setting. (There’s a user settable ‘Expert’ programme, but I have neither the knowledge nor the inclination to investigate that). No, it’s the Relax program that really makes the Flat special. Essentially a ‘Standard Lite’ setting, it also heats the disc, although not to as high a temperature and then cools it even more slowly, in a process not dissimilar to the heat-treatment used to condition alloys. Just what this does or how it works is open to conjecture, but the fact that it does work is easy to hear. I started out by treating one of a pair of identical pressings. Before treatment they were all but indistinguishable: after subjecting one to the Relax program, the benefits were shockingly audible. The Relaxed disc had a tonal and musical purity that was notably smoother and more articulate, making the untreated pressing sound clumsy, thick, and grainy. There was an unforced sense of space, ambience, clarity, and focus that made what was already a great record noticeably more natural, convincing, and enjoyable – and this on a brand new, 180g audiophile pressing of impeccable pedigree. The suggestion is that the Relax program removes physical stresses from the disc that are an undesirable after effect of the pressing process. That certainly accords with the audible benefits, but whether that’s what actually happens… who knows? What is for certain, however, is that something happens – and it’s something very good!

Suitably impressed I started looking back through my collection for older discs and examples and found the Flat to be almost as effective in relaxing 1960s and 1970s pressings as it is on current issues. Pretty soon I was simply using it on all my favourite discs, just to enjoy the benefits rather than as part of any controlled process. Which is the real beauty of the Flat. Unlike other flatteners, it is no one trick pony. It doesn’t just excel when it comes to flattening warped discs; it will improve the sound of EVERY record in your collection. It may take its time but then, it’s fully automated: you just need to remember to reload it regularly. A beautifully presented product that looks the part and more than delivers on its promise, for the audiophile who has everything, especially one with a serious record collection, the Flat could just be the very desirable icing on their musical cake. Highly recommended.