Many veteran headphone enthusiasts are familiar with the California-based firm Audeze and its famous LCD family of full-size planar magnetic headphones, the flagship model of which is the critically acclaimed LCD-4 headphone, which sells for a bracing £3,599 (or $3,995 in the US). Those who have heard the LCD-4 would likely agree that it is an extremely sophisticated and sonically capable headphone—one characterised by deep, powerful and well-defined bass, with exceedingly open, transparent, revealing, and well-balanced mids, upper mids, and highs. Despite these desirable strengths the LCD-4 is not necessarily the right headphone for everyone, partly because of its formidable price, but also because the headphone is comparatively heavy and bulky with what some consider overly high clamping pressures. Moreover, the LCD-4 is only moderately sensitive (97dB), which means it enjoys a reputation for being somewhat power hungry and extremely demanding of amplifier quality. This raises a question: wouldn’t it be nice to have a headphone that sounded much like the LCD-4, but that was considerably lighter, more comfortable, easier to drive, and less costly into the bargain?

This is precisely where the new LCD‑MX4 model comes in, priced at £2,799 (or $2,995 in the US). In fact, the easiest way to understand the LCD-MX4 is to think of it as something of a cross between the ultra-high performance Audeze LCD-4 and the firm’s more sensitive, easier to drive, and lower priced LCD-X—albeit a new model complete with some distinctive design twists of its own that make it one of the lightest and most comfortable LCD models ever.

The LCD-MX4 is an open-back, circumaural planar magnetic headphone that uses an extremely low-mass 106mm Uniforce diaphragm patterned after the diaphragm of the LCD-4. Like the LCD-4, the LCD-MX4 is fitted with an extremely powerful Double Fluxor™ magnet array that is essentially a more powerful version of the LCD-X magnet array. One key differentiator, however, is that the LCD-MX4 foregoes the Fazor™ waveguide elements used in both the LCD-4 and the LCD-X. The end result is a headphone that offers transient speed and transparency reminiscent of the LCD-4, but that enjoys significantly higher sensitivity (a stonking 105dB, which is higher than any other LCD model).

Where the LCD-4 uses massive wood ear cup frames fitted with heavy slotted metal outward-facing driver protection plates, the LCD-MX4 uses a more streamlined and lightweight one-piece ear cup and vented rear cover made of magnesium. This new ear cup/rear cover structure not only looks lighter and more svelte than the ear cups and rear covers of other LCD models; it feels noticeably lighter, especially when the wearer suddenly turns his or her head to the side. Like the LCD-4, the LCD-MX4 uses a sturdy but light carbon fibre headband frame, beneath which is suspended a nicely made leather headband support strap.

Like other LCD models, the LCD-MX4 uses height-adjustable metal ear cup yokes that allow the ear cups to swivel from side to side and to tilt upward and downward until a comfortable fit is achieved. As another comfort-orientated touch, the MX4s feature Audeze’s bevelled, leather-clad ear cup pads, which are thicker toward the back of the wearer’s head and thinner toward the front (Audeze has used bevelled pads like these on all LCD models from the original LCD-2 forward). In keeping with past LCD practice, the MX4 provides a left/right pair of forward-angled mini-XLR-type signal cable connector jacks. The MX4’s connector housings, however, appear to be a bit smaller and less massive than those found on the earlier LCD headphones (again showing Audeze’s efforts to trim weight where possible).

The headphones ship with a high quality set of braided signal cables with mini-XLR fittings on the headphone end and a 6.35mm headphone plug on the amplifier end. In addition, the headphones come with a short 6.35mm-to-3.5mm mini-plug adapter cable that is handy for users whose headphone amplifiers (or PCs, tablets, or smartphones) only provide 3.5mm mini-jack outputs. Last but not least, the headphones arrive in a large, thickly padded, moulded thermoplastic ‘flight case’ that looks very robust indeed. Audeze’s collateral materials for the LCD-MX4 make it clear that two of the intended applications for this model involve in-studio and/or remote-site monitoring, and the heavy duty case certainly looks like it can stand up to the sort of constant gear shuffling that often occurs in studio environments.

I used the LCD-MX4 in a system comprising a Windows-based Lenovo/jRiver Media Center music server feeding a Chord Hugo 2, which in turn drove a versatile hybrid valve/solid-state iFi Audio Pro iCAN headphone amplifier. Also used in the system were a set of Rega Couple analogue interconnects and a Chord Electronics USB digital cable specifically made for the Hugo 2. Secondarily, I also used the LCD-MX4 with the compact yet superb iFi Audio Nano iDSD Black Label amp/DAC as reviewed in our last issue. Headphones on hand for comparison purposes included the Final D8000 and the MrSpeakers AEON Flow Open (reviewed in this issue on pages 8 and 49 respectively).

From the outset, the MX4 just felt right; it is not a featherweight headphone by any stretch of the imagination, but its overall size, shape, and relatively low mass make it comfortable to wear for hours on end. This isn’t just my impression, by the way; a colleague who never before liked Audeze’s LCD models owing to their bulk and weight said he found the MX4 different, better, and much more to his liking.

Sonically, the LCD-MX4 comes across as ‘son of the LCD-4’ in many respects, in particular showing an energetic, and very revealing midrange that sounds positively luminous and that is highly reminiscent of the sound of Audeze’s top model. Upper midrange and treble articulacy and resolution are very good, too—perhaps not quite matching the performance of the LCD-4, but not far off the mark. Most importantly, the LCD-MX4 offers a well-integrated and all-of-a-piece sonic presentation from the lower midrange right on up to the highest treble frequencies. Thanks to this ‘cut-from-whole-cloth’ sonic quality, the LCD-MX4 encourages listeners to resist dissecting or analysing what they are hearing and instead to relax and simply drink in the music as a whole. In short, the MX4 is less about drawing attention to itself and more about creating a total immersion listening experience. 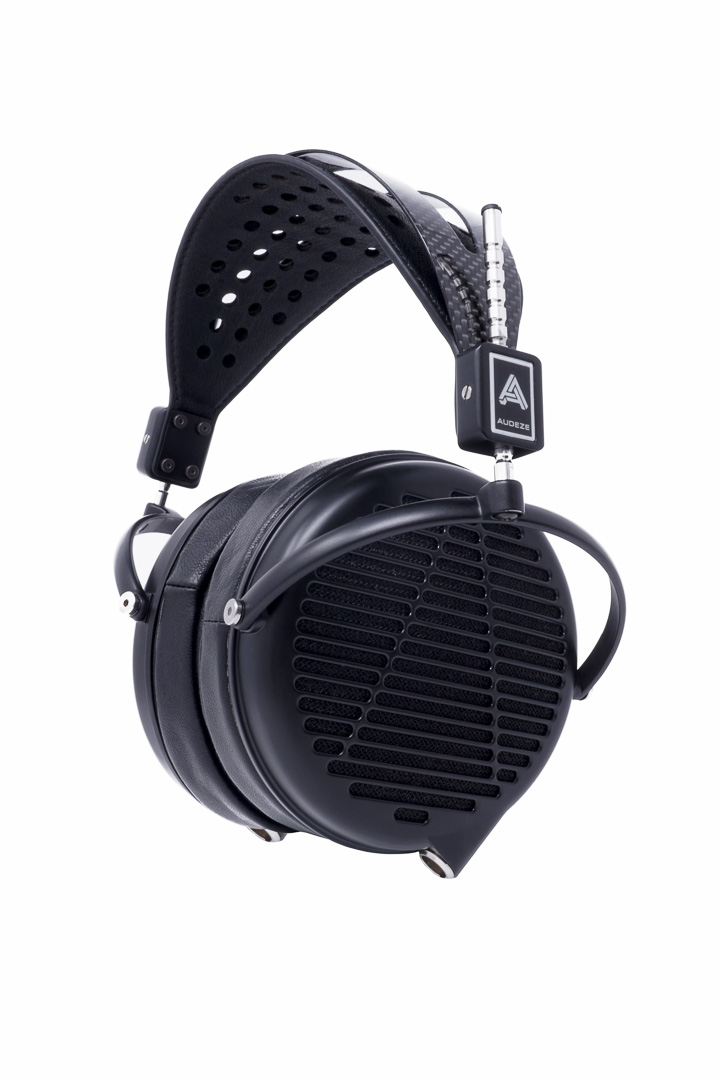 The MX4’s holistic quality made itself felt on any number of tracks, but one I particularly enjoyed was Agnes Obel’s ‘The Curse’ [Aventine, Pias America, 16/44.1], where Obel’s wispy and reverb-drenched voice stands counterpoised against the song’s measured and almost dance-step-like recurrent cello theme (where the cello’s lines combine a mix of pizzicato and arco playing techniques). There is something about the contrast between Obel’s upward-reaching vocals and the rhythmic, woody voice of the cello anchoring the track that makes it both mesmerising and endlessly fascinating. And there is the appeal of the LCD-MX4 in a nutshell: It invites listeners to set equipment concerns aside to focus on what’s really important—the sound and emotional content of the music at hand.

The LCD-MX4’s bass is deeply extended and appropriately weighted, though perhaps not quite the last word in tautness and definition. Still, the MX4’s low end provides solid foundational underpinnings for any music you might choose to play. A great example would be the track ‘Ghazali’ from Renaud Garcia-Fons’ Oriental Bass[Enja, 16/44.1]. ‘Ghazali’ serves up an uncommonly evocative and tonally inquisitive acoustic bass solo as created by Fons, and the LCD-MX4s responds with rich and wonderfully saturated bass tonal colours that perfectly convey the weight, depth, and scale of the wood-bodied instrument. In fact, the MX4s do a great job of showing how the low strings of the bass generate sounds that seems to bloom and expand, gradually energising the entirety of the recording space.

Finally, the LCD-MX4 proved unexpectedly easy to drive. The headphone is sufficiently revealing to be sensitive to amplifier quality, but can be driven by relatively low-powered amplifiers, such as the little iFi Nano iDSD amp/DAC. This is what sets the LCD-MX4 apart from the LCD-4, which can be finicky about amplification and seems to give of its best when pushed with a generous amount of power. 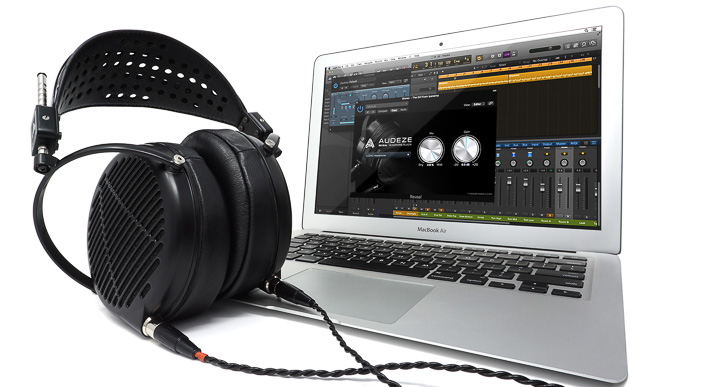 Audeze’s LCD-MX4 is a different and very satisfying kind of high-end headphone. It offers much of the resolution and finesse of the firm’s top LCD-4, but in a lighter and more comfortable package that is—to a ‘just right’ degree—more tolerant of source and amplification components, as well as of less-than-perfect recordings. Well done!

Weight: Not specified, but said to be “significantly lighter than the LCD‑4 model”