Arcam’s rSeries of components genuinely extend the functionality of both Arcam’s product line, and electronics in general. Few companies (only Musical Fidelity and PS Audio spring to mind) produce a similarly extensive line of truly useful audio components, as they all combine a refreshing blend of versatily, affordability, and a complete absence of BS. The rPhono is one of the latest models, and it’s a damn fine inclusion to the audio pantheon. 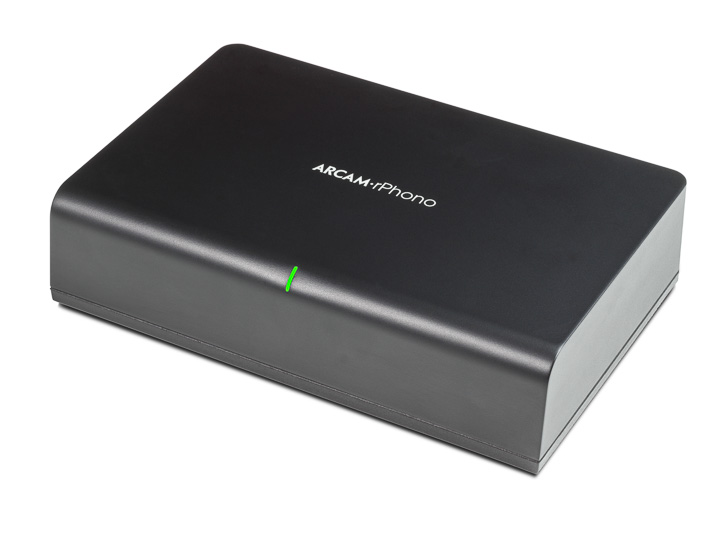 As the name suggests, the rPhono is a standalone phono stage. It’s RIAA only, but a series of rear-mounted DIP switches offer a surprising amount of flexibility in cartridge options. Adjustable impedance, capacitance, and gain afford the rPhono far greater choice in MM and MC cartridge selection than its bluff exterior and £399 price tag would ever suggest. There is also an inclusion that has all but disappeared from modern phono equalisers, but its inclusion is gratefully received: the rumble filter. While the modern turntable is now more resistant to rumble than ever before (Crosley notwithstanding), the variable quality control of some vinyl pressing plants means finding an LP without some degree of warp can be difficult, and those records that aren’t so warped as to require replacement can still undermine the performance of a good audio system, and a rumble filter is a lot less discomforting that watching your bass drivers flap about. Unlike LP replay systems from a couple of generations ago, this rumble filter is hidden away on a rear-mounted DIP switch, and is not intended as a button you action as and when the mood (or the flapping cones) take you. Front or rear mounted, there will be many who welcome the reintroduction of the rumble filter.

Choice of cartridge notwithstanding, the rPhono is simplicity itself to setup. It runs from a 12V, 2W wall-wart power supply (or can be fed from modern Arcam amps that come with an outlet). There is no need to bother hunting for aftermarket power supplies, because Arcam did sterling work ensuring the power feed is well isolated from the equaliser electronics. Even those pesky DIP switches and the gain adjustment are taken care of, thanks to a supplied tool that sits on the underside of the black-finished aluminium case. The rPhono also comes with a pair of phono-phono cables to connect the phono stage to the amp, but I suspect in most cases, these will stay in the box and something better gets put to use. Nevertheless, it’s a measure of Arcam’s no-nonsense approach that free cables are supplied in the box. Similarly, running in, Arcam-style involves taking the rPhono out of the box, and plugging it in. Does it get better over time… yes, a bit, but not enough to write lengthy tomes about burning in or conditioning. Once you have set your cartridge loading to suit, and plugged everything together, the rPhono is good to go. Minimalism reigns supreme though; just a logo on the top panel and a green LED bar on the front.

Then you plug it in, turn the amp to the phono stage, and realise why the whole ‘Excellence for all’ subtext of this issue applies perfectly here. If there is a better example of a high-end product in all but price tag, I have yet to hear it. The rPhono is the perfect example of a high-end phono preamplifier in every respect, bar two: put it in a big, heavy box with an inch-thick front panel, and make it cost £3,990 and it would tick those boxes, too. You’d need to make no changes to the performance, though. OK, so in reality compared to the very top end, you lose something of the last degree of texture, depth, and timbral shading, but given the quality of the product and just how much more you need to spend to get something substantially better, the rPhono is doing a lot right, and not a lot wrong. 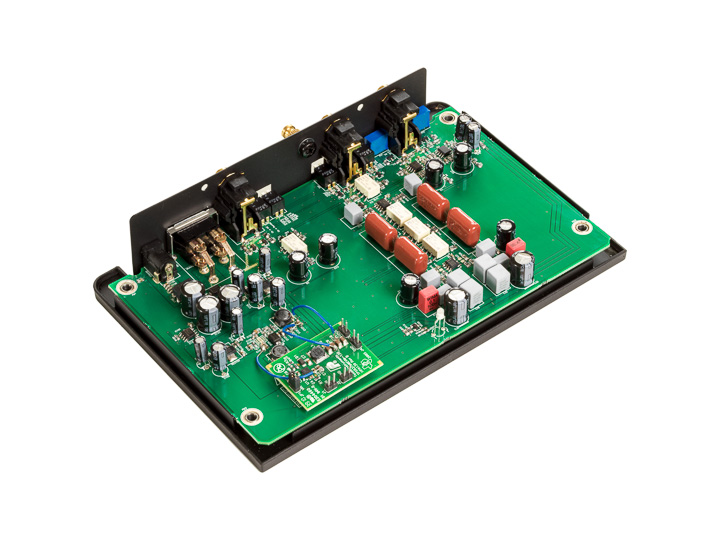 The mark of a good phono stage is two-fold. First, can it cope with very demanding loads without struggling, and second just how good a cartridge would you use with the phono stage. In the first case, the Arcam’s low noise and flexibility of installation almost made it pass the extremely unfair Ortofon MC7500 test: this now historic cartridge has so low an output, people have speculated whether it’s a moving coil or simply a moving hoop of wire. Nevertheless, the cartridge’s 0.15mV output is more of a test of the noise floor of a phono stage at this time, and the rPhono acquits itself surprisingly well. It’s patently a well-engineered design because the noise floor is unobtrusive even faced with an implausible load. OK, so the rPhone lacked enough gain here, but in the real world this would never be a problem, and what you have is a whisper-quiet background from the phono stage and a fine gain-structure that benefits both the majority of cartridges and most line-level preamplifiers or integrated amps. Test. Passed. Easily. Most of the rest of the listening was divided between my VPI Prime with a Lyra Delos cartridge and the Roksan Radius/Nima/Corus Silver package tested in this issue.

The next test was partnering the rPhono with more realistic loads, but cartridges far beyond the scope of a £400 phono stage. And it’s here where the Arcam rPhono really showed what it was made of. What separates great cartridges from the merely ‘good’ is their character; some cartridges are more sonorous, some more harmonically structured, some have a greater sense of instrument timbre, and all of these subtle differences in performance require a high-grade phono stage. Using an average phono stage with a good cartridge is a waste of a good cartridge, but the rPhono lets that cartridge character shine through. This is not simply down to accurate cartridge loading (although this helps), the inherent transparency and openness of the rPhono simply gets out of the way of the cartridge, to let the music pass untrammelled and unsullied. Put another way, if you’ve ever wondered why some people like Lyra cartridges, some prefer Dynavectors, some choose Kiseki models, and some go for Ortofon, you haven’t heard what they can do through a good phono stage, and the Arcam rPhono represents the most cost-effective way of getting a good phono stage I currently know of.

How this comes through is by allowing you to play all kinds of music through the system, constrained only by the tonal and timbral balance of the cartridge itself (and how it interacts with turntable and arm). So, you play a complex piece of operatic music, such as Handel’s Belshazzar [Turnabout three LP set from 1964] and the precision of the stereo image and its ability to separate singers, choir, and orchestra all bespeaks of a fine cartridge well reproduced. The same happened across the full pomp of the whole of Genesis’ Selling England by the Pound [Virgin, EMI 100th Anniversary pressing], and even managed to extract the fun groove out of DJ Krush’s Turntabalized album [Mo Wax], without being drowned in mid-1990s Trip Hop excess. And when it comes to extracting the groove from the groove, few examples work better than listening to all of Funkadelic’s One Nation Under A Groove LP [Warner]. Perhaps this is the ultimate expression of why the rPhono is a great phono stage (not just at the money, it’s a great phono stage anyway); individual tracks came and went, and quickly blurred into whole albums (in fact, in all these cases, multiple albums). I’m not a big listener to early 1970s Genesis, as my Pretensionometer tends to go into the red zone, but the Arcam rPhono made me want to listen to more, and that doesn’t often happen at this price point.

We’re living in a golden age of good phono stages that deliver high-end performance without the attendant hyperbolic prices. Models from Cyrus and Vertere are good enough to take on challengers costing £10,000, but now Arcam does the same for under £400. Now it’s time for those five words that send audiophile manufacturers running for cover: The Law of Diminishing Returns. Some say that law doesn’t exist in audio, and especially not in the vinyl world, but in my view, when it comes to phono stages, the point of inflexion begins with the Arcam rPhono. You need to spend a lot more to get a little better performance. 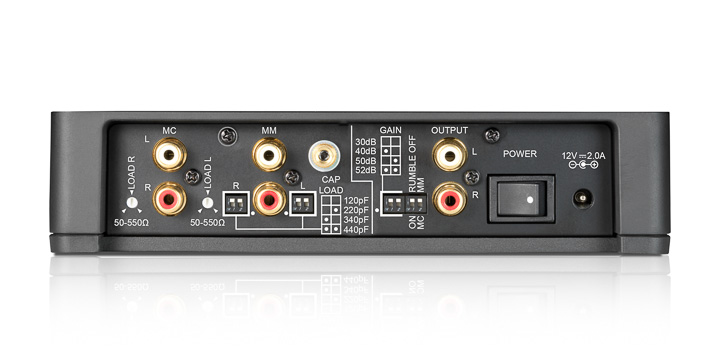