Having recently spent several happy weeks with Accuphase’s E-370 integrated amplifier for issue 178, the prospect of spending yet more quality time with one of its bigger siblings, the 30W Class A E-650 was too good to pass up. It duly arrived, right in the middle of the global pandemic lockdown, which meant its delivery and receipt had more overtones of Bridge of Spies than is usual for such matters. Still, once here, duly disinfected and installed, one obvious benefit to lockdown is somewhat more time stuck at home and available for music listening.

Accuphase offers two amplifier technologies, Class A/B and Class A, with the Class A models positioned at the upper end of the product range in terms of performance and price. Until the recent introduction of the 50W E-800, the E-650 was the flagship integrated amplifier, offering a conservatively-rated 30W per channel into an 8Ω load, doubling into 4Ω and 2Ω loads respectively. The E-650 uses Accuphase’s proprietary AAVA preamp circuitry, here in dual balanced mode, and the power amplifier employs their ‘instrumentation amplifier’ topology, for fully balanced operation from source input to speaker output terminals.

One rule with Accuphase power seems to be ‘don’t get hung up on the numbers’; the company states ‘guaranteed’ performance specifications, and the real-world performance usually comfortably exceeds these. So Accuphase Watts tend to be beefier than regular Watts, and Accuphase Class A Watts are beefier still. In terms of ability to deliver a satisfyingly visceral musical experience, the 30 Class A Watts of the E-650 easily bested the 100 Class A/B Watts of the E-370. I suspect this is partly down to the fact that Class A is ‘always on’, the power supply delivers the same output regardless of the music demands, so there’s no additional strain in the hot and heavy bits. I’ve heard other Class A amplifiers in the notional 25-30 Watt range, and they all do this to a degree but the Accuphase is definitely one that makes it possible to simply ignore the numbers as, frankly, rather irrelevant.

And that’s as it should be, really. We’re here to enjoy our music, the numbers are for those who have a use for them. Taken together with the low output impedance and high damping factor it all seems more than sufficient, and unless you listen at stadium levels in a room the size of a squash court, the E-650 feels entirely likely to be able to rise to the occasion. It doesn’t seem to run particularly hot, either, which is great when you’re tied to the house and the weather turns warm… 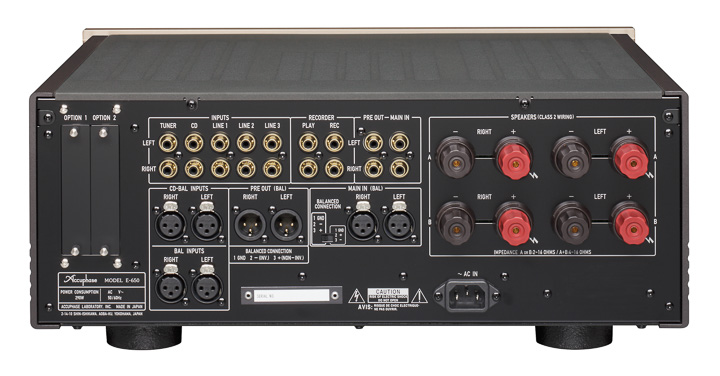 The more I listen, the more I’m becoming undecided about whether there’s a definite ‘house sound’ to Accuphase. Conventional wisdom often describes it as tending to ‘warm’ rather than ‘lean’, though I think that’s a mis-characterisation. I can see where it comes from: take ‘After the Gold Rush’ on Hymns of the 49th parallel [Nonesuch], the bass has real texture, strings are full and lush, the piano has power, a richly sonorous presence, and kd lang’s voice is creamy and full of character. But these are just reflections of the true sounds of the instruments, it’s not any kind of euphonic coloration. I think, rather, that it’s less of a ‘house’ sound, and more about the form of experience. When you listen to live musicians perform, there’s no tendency to analyse the sound as warm, bright, lean, or any of the other adjectives we fumble around with, it just is what it is. And that’s where I find myself with the Accuphase E-650: it’s easy to forget about the sound and just experience the music. Any perceived warmth is the natural warmth of real live musicians, the sort of warmth you experience in a concert hall with a live orchestra: living, breathing souls playing real physical instruments in your presence. The music as rendered by the E-650 simply has more shape, solidity and definition; it is what it is.

The Jacques Loussier Trio’s Theme and Variations on Beethoven Allegretto from Symphony No. 7 [Telarc] is a case in point, it’s not simply that the trio’s phrasing and timing is absolutely on the money, it’s that the whole musical envelope is more natural and convincing. The instruments are richly coloured and three-dimensional, and dynamics and timing are so effortless you don’t even notice. The overall effect is to refresh the music and show it in a new light; old and familiar tracks are newly interesting, but the music is brought out, rather than forensically examined. I didn’t find myself marvelling at the Renaud Garcia Fons trio’s timing on ’40-Dias’ from Arcoluz [Enja], because I was too busy enjoying it’s ‘rightness’ and the renewed sense of intrigue that gave it, right from the opening bars. Listening to Keith Jarrett, ‘Hymn of Remembrance’ from Hymns and Spheres [ECM], it was suddenly apparent that he wasn’t just improvising at the organ, but also making use of the vast and reverberant acoustic space to contribute to the music. These are not subtle musical experiences, but they derive from something being ‘right’ rather than ‘good enough’. 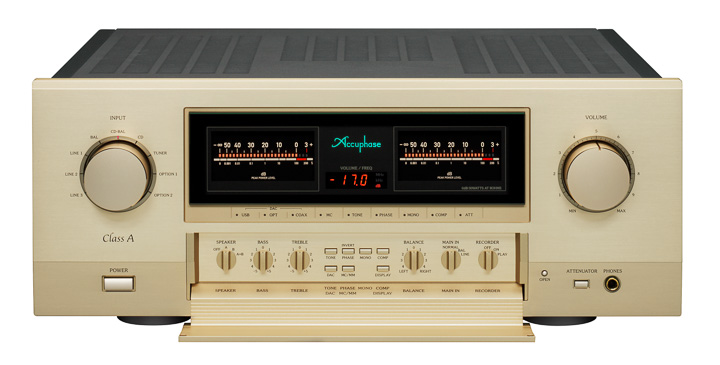 Talking of subtlety, there’s as much fine detail as you could wish for, including those vital ambience cues. It’s not a smooth, airbrushed presentation – any beauty is entirely down to the music. Unlike some more analytical amplifiers, detail isn’t pushed at you for its own sake; it is layered but not separated or highlighted, so the Accuphase seems to trigger the ‘music appreciation’ part of my brain more than the ‘music analytical’ part. You perceive the music as a gestalt rather than as a collection of elements, which is closer to what happens in a live experience. It’s that ‘rightness’ thing again. Key musical touch points: timing, pitch, tonal colour, dynamics, and no doubt a myriad of other parameters such as phase relationships, all rendered just a little bit more convincingly, so the brain has less work to do in maintaining a ‘willing suspension of disbelief’. So, I now find I have the capacity to notice that when Tord Gustavsen plays piano on ‘At Home’ from Being There [ECM], while this is unquestionably jazz, his precision of touch has much in common with classical technique, for example V.kingur .lafsson’s exquisite rendering of Philip Glass Piano Pieces [DG]. And that’s not me getting all analytical again, it’s just the sort of thing I’d notice in a live gig, when I’m engrossed and not having to process the signal just to make sense of it. Dave Brubeck, ‘Unsquare Dance’ from Time Further Out [Columbia] and the little miracle of how everything comes to an end ‘just so’, is even more miraculous when you can hear how the quartet plays with the timing without ever letting it get away from them.

And on the subject of detail, I’ve already mentioned Keith Jarrett’s use of acoustic space, but live albums are also a particular pleasure. The audience appreciation in ‘Hotel California’ from Hell Freezes Over [Geffen], or the applause on Arcoluz [Enja] is not just window dressing, it contributes to the feeling of presence, of an event. And have you ever been to a live gig, then bought the CD and been disappointed?I remember being astonished by a set by a Joshua Redman quartet a year or two ago, but the CD of some of the same music, Compass [Nonesuch], sits largely unplayed. I dug it out again, and the music now makes more sense and I’m starting to remember why they blew me away when I was there. 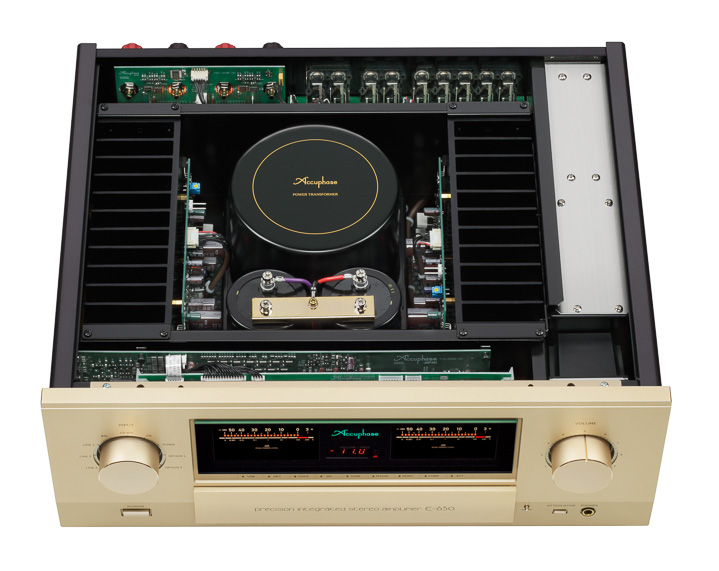 It helps, of course, if you have the right speakers. I started with the Amphion Argon 7LS floorstanders, and the Accuphase amplifier seems to have the knack of bringing out their considerable talents. Solid, weighty, tight, tuneful bass underpinning a subtly expressive musical message. Happily though, and again thanks probably to a certain global pandemic, I still had the Fyne Audio F702s on hand, which worked so well with the E-370. Twice the price of the Amphions, but fed by the E-650 they were simply captivating. I suspect it’s a feature of Accuphase’s AAVA preamp architecture, but the performance is much less leveldependent than with many amplifiers, too. It’s possible to get this immersive effect even at modest volume. Edvard Grieg, ‘Varen’ [Chandos] had an almost tangible sense of presence even at late night listening levels.

Sometimes you encounter a product that makes you reassess what you expect from your system. That’s just happened to me with the Accuphase E-650. It is transparent, not in the sense that the signal is preserved (though it surely must be), but in the sense that it makes it easy just to forget that it is there at all. There’s just you, and the music. It’s not so much transparent as invisible