Titan Audio is a comparatively new company out of Northern Ireland in the UK. Titan’s area of specialism is power products, making a tidy collection of power cords, distribution blocks and accessories related to said power-line products. There are currently five power cords – each with its own separate ‘Signature’ version – in the range, and Eros and Eros Signature is smack in the middle of that line-up. There are also three distribution blocks, with Eros being the most high-end of the lot.

The prices of Titan Audio range from £100 for the entry-level Nyx up to £2,500 for the Nemesis Signature. This is a useful indicator of intent; the company goes from where the entry point in power cables currently resides up to the upper reaches of ‘attainable’ rather than the ‘stratospheric’ (the upcoming Apollo cord might revise that statement). Regardless, £600 for the Eros Signature is a something of a power cord sweet spot, as it straddles both the very well ‘sorted’ system that might cost under £10k and the high-ender who’s convinced of the need for a good power cord but is unconvinced their £20k amplifier needs a £5k power cord. 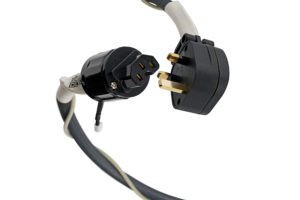 Eros Signature features four 6mm OCC multi-strand conductors, with an external multi-core dual drain wrapped around the main grey/black sheath. The conductors themselves are sheathed in a PTFE dielectric and a braided steel screen. The connectors at both ends are cryo-treated custom variants of red copper IEC and Shuko/US plugs, with the UK variant getting custom versions of the MS HD UK plug and fuse.

Each Titan power cord is a minimum of 1.5m long; this is not designed to sell people up into buying longer power cords; research performed with Queens University Belfast concluded this length has the best balance of resistance, capacitance and inductance, thereby giving the greatest benefit to performance; shorter cables reduced the sound quality. As many other brands (often brands with far more esoteric products than Titan) have come to the same decision through listening tests and measurement, it seems Titan is onto something with this 1.5m optimum length for power cords.

Keen-eyed Titan Audio watchers might note the Helios, Eros and both their Signature editions have a flying lead coming out of the IEC connector. This hooks to the deliciously named ForceField Module, which is a powered, active RFI and EMI shield around the mains cable itself. It uses a plug-top power supply with a range of sockets for UK, EU and US use, and the module itself attaches to the power cord with Velcro straps. More power cords in the Titan range are expected to use the FFT (ForceField Technology), and a multi-way power supply is expected soon too.

I was very taken by the immediacy of the performance of Eros Signature. It has excellent bass, with depth and clarity shining through immediately. This was also not at the expense of anything further up the signal chain. The midrange is open and expansive, with excellent clarity and vocal projection and the high-frequencies are admirably lithe and free from any kind of edge. The overall sound is dynamic and energetic, but without the zingy leading-edge of some similarly priced contenders. I’d suggest that it’s the perfect partner for decent performing electronics (in the Hegel or Primare class) rather than an entry-level cord for the highest of high-enders, but even when used in more lofty systems, the Eros Signature’s sense of overall balance, coupled with that good, deep bass, shines through.

Some cables impose their sonic signature on the music and it is why power cords are often so important in creating a good foundation for the sound. While that has often ended with companies creating whole families of cables for a ‘nose-to-tail’ cable approach. That doesn’t seem to be so important with Titan Audio; the absence of character (in a good way) means the Eros Signature is a neutral canvas upon which the rest of the system makes its mark. The bass depth, the impact-free sound on the mid and top, an absence of background noise, edge, or zing all make for a very honest presentation overall. 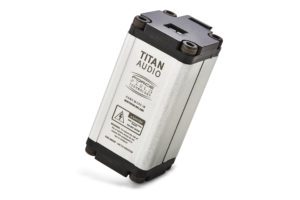 I’m in two minds about the FFT, however. When it works well, it seems to make the power cord deliver even more clarity with less ‘spikiness’ or harshness (not that there is much harshness to hear from the Eros Signature without FFT). When it doesn’t, it over-smooths the sound. In part, the difference is situational; use a system with a lot of wal-wart power supplies, have a house filled with phone chargers and the like, or live somewhere where the AC ‘juice’ is never less than ‘awful’ and ‘using the Force(Field)’ makes the sound significantly improved over the base Eros Signature. If you live in the rolling hills of the South Downs, where your nearest neighbour’s Wi-Fi router is a mile or more away and everything has its own dedicated linear PSU, then there’s no need to raise the forcefield. However, the overall balance was positive with or without FFT and even if it acts a little too strongly for your setting, such things are relative. I guess in an ideal world, you might want to dial the FFT’s impact up or down according to the environment. But no biggie either way.

Titan Audio is clearly confident about its products in that they come with a lifetime warranty. I am always wary about such things with power products (it’s like the old joke about the lifetime warranty on a watch… when it breaks, the mainspring springs out of the watch and kills you), but for once I think this is genuine. The Eros Signature is a fine power cord and more than has a place even in this most contended of markets. That it can be enhanced by the ForceField Module makes a lot of sense in some systems, too, but where the Eros Signature is an easy recommendation, the FFT is more qualified and system-dependent, so if you can try it first… all the better.