Although I know it’s an unrealistic expectation, I always hope and pray that any new CD player I encounter will have an immediate and transforming effect on my entire silver disc collection – in much the same way a new turntable, arm, or pickup cartridge might. Alas, digital doesn’t really work like that. Of course, it reaches a high standard, but it’s difficult to get it to go past the point where the total result (sonically) is much greater than the sum of the parts. But, still – the hope remains!

Such were my thoughts as I unboxed the Roma CD 14DC+ player from Synthesis, and got it going. The review sample had been fully run in, so I could listen straight away. It meant those important early first impressions were valid…

The Roma 14DC+ uses a TEAC CD 5020 transport, and this provides a very stable disc platform. By chance, a week or so before the Roma arrived, I happened to play a CD I bought about 25 years ago. The disc was made at the PDO plant in Blackburn, and it had suffered oxidisation. PDO CDs were notorious for this. Oxidisation turns the top surface of the disc a sort of bronze/gold colour rather than silver. The aluminium corrodes and the digital pits on the disc become corrupted. The disc might still play, but only part of it will be okay. Using my regular player, I heard a nasty cyclic crackle and audible distortion/breakup after about 12m. Bah! The first 10m or so of the disc played fine, but after that the sound started to coarsen and I heard swishing/clicking noises. However, playing this disc on the Roma, I was able to listen for around 40 minutes before anything untoward happened – and even then, the deterioration was relatively benign. This demonstrated the TEAC transport’s ability to retrieve every last drop of information – even off a corrupted disc. Another corroded CD from the same factory behaved similarly. On the Roma, it played right to the end. And while there was some coarsening of the sound, and a bit of background swish, the result was listenable. On every other player I’ve ever used, the final 23m were always unplayable… 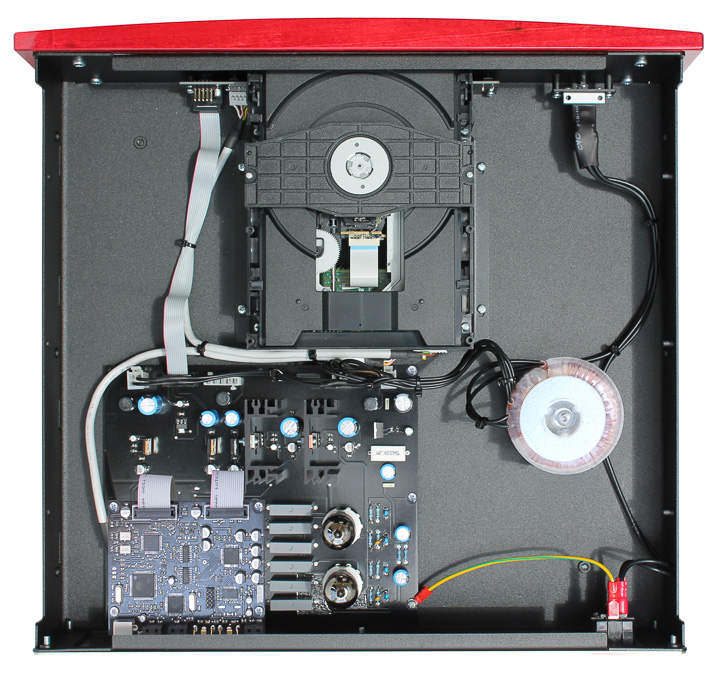 During use, the transport is to all intents mechanically silent. There are no whirrs or swishes to be heard – even putting your ear right up close to the player. You don’t even hear a mechanical cyclic hiss or series of clicks when playing corrupted discs. Excellent!

Track access is fairly fast, but not instant. The CD drawer moves at a medium pace, being neither too-slow nor too-fast. The drawer itself could move in and out a tad more smoothly. There was a very slight judder on the review sample, but perhaps I’m being over-fussy.

The D/A converter used is an Ashai Kasei AK4497 32bit 192kHz with upsampling, and the analogue output stage is based-around ECC88 double-triode tubes, 1 per channel. The output voltage is quoted at 1.5v, and unbalanced. It would have been nice to have balanced outputs as well, but – not a deal breaker… The 14DC+ features a USB digital input – 32Bit 384KHz (USB) with DSD up to 5,6 Mhz. However, I had difficulty getting the USB connection to work with my laptop, and so couldn’t really investigate this side of things.

The Roma 14DC+ is a full-size player measuring 410×390×95mm. In terms of features and facilities, the Roma is fairly minimalist. No variable output, no balanced output, no headphone socket, no switched normal/upsampling option, etc. But everything you might want is there, including a USB digital input. So, little or nothing important left out. It’s built on a steel chassis with a steel top sleeve, and a curved solid-aluminium front fascia plate (in black or silver) that’s 10mm thick at the edges and 20mm thick in the centre. During use, the player gets mildly warm to the touch, but that’s all. When switched off, the tube heaters remain on which keeps the player nicely primed and ready for serious listening the moment it’s switched on.

I was immediately struck by an overall presentation, which seemed clean, clear and focused, with good detail and definition. I noted almost instantly the Roma’s extra focus and precision. There was nothing coarse, loose, or wayward about the sound. Rather, it seemed focussed and controlled, with excellent clarity and detail. A truthful neutral presentation that sounded natural and real, with no hint of exaggeration or excess. 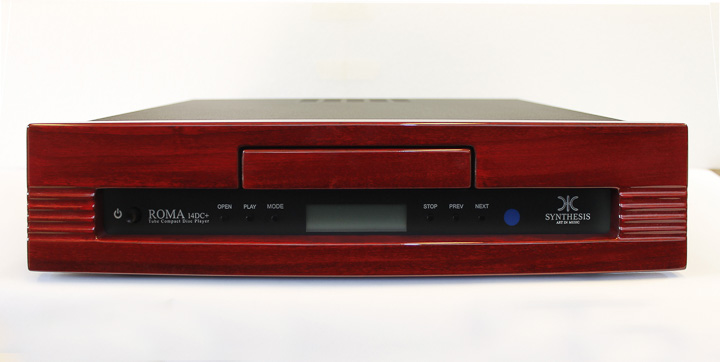 As someone who mainly listens to classical music, I place high emphasis on natural tonal quality and truthful timbres. For example – in real life, a violin often has a woody mellowness which most hi-fi finds very hard to replicate. The same holds true of an unamplified voice. It’s difficult to put this quality into words, but you know it as soon as you hear it. It manifests itself as a kind of effortlessness – as though the reproduction is being achieved without unnecessary struggle or effort.

The Roma delivered more of this ‘effortlessness’ than my regular CD player. It was clear and detailed, but slightly more refined and mellifluous – like a smooth well-oiled machine. It was akin to SACD; albeit, not quite up to that high standard in terms of resolution. As already mentioned, the Roma 14DC+ delivered a very beguiling sound, and proved extremely easy to listen to. It had a way of drawing you into the music and sounded detailed and clear without seeming over-analytical or ‘revealing’ in the negative sense.

Playing Glenn Gould’s recording of Bach’s Well-Tempered Clavier [Sony], I was impressed by the manner in which Gould’s voicing of this very contrapuntal music stood revealed, allowing you to follow the interweaving musical narrative in terms of dynamics, and tone colour.

The 14DC+ is very good on human voice and seems to bring out lots of subtle mid-tones and warmth without emphasising harshness. I used the word ‘effortless’ before, and that sums up the smooth ease and flow of the music reproduction. But, don’t let this fool you. As with SACD, sometimes the results don’t seem overly impressive. Because there’s no fake drama, the end result can almost seem like something’s missing. I’ve sometimes had similar impressions at live concerts.

Un-amplified music sounds different to amplified music! Often, the latter is on sonic steroids, and the end-result sounds pumped-up and exaggerated. So, while there’s perhaps something slightly understated about the Roma 14DC+, it’s deceptive. Increase the volume a little, and the sound quickly blossoms and burgeons to fill the room. And because the Roma sounds so natural and refined, you won’t find the end result harsh or fatiguing when playing things a bit louder.

One recording that really impressed me was the 60th anniversary edition of Frank Sinatra’s Only the Lonely [UME]. This newly-remastered 2CD set has this legendary album in original mono and a new stereo mix, and sounds amazingly full and rich. At times, it’s like Sinatra is standing in front of you, singing – so palpable is his voice. It has presence and body, and effortlessly fills the room. It’s a big sound, yet never merely ‘loud’ or overbearing. It sounds like a real person. And the voice itself – Sinatra never sounded so smooth and resonant – with a warm full-bodied quality, and little or no edge. I kept playing the album again and again, so powerful and involving was the effect produced. 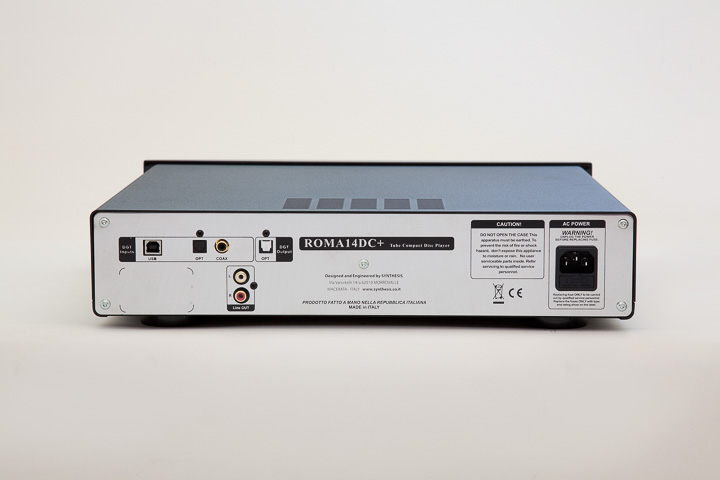 I was impressed by Synthesis’ Roma 14DC+ CD player, and feel it must represent something close to the sonic limits of what’s possible with conventional Red Book CD. It literally did not put a foot wrong, and could play all kinds of music with great authority and fidelity. I still dream that – one day – a CD player will come along that totally knocks the ball out of the park. But increasingly that seems less and less realistic. I know; Never say Never. But I doubt it will happen. So, I am not holding my breath in anticipation… Meanwhile, back in the real world, a player like the Roma 14DC+ gets surprisingly close to that ideal, and does so moreover at a relatively affordable (albeit limited edition) price of £1,799 including VAT.

The Who: Who’s Next (Deluxe Edition) HR