We all got very excited when the compact disc came along, the scratch resistant, jam-proof “perfect” medium for the first digital music format, but it seems that the gloss has well and truly worn off 36 years later. It looks like CD will be outlived by vinyl of all things, the very medium CD was supposed to have eliminated by the beginning of the 1990s. But there are still CDs being made even if CD players are getting a bit thin on the ground; so much so, in fact, that if you want to enjoy your disc collection for another few decades, now might be a good time to invest in a new player.

The dearth of decent new CD players is partly related to the difficulty in finding a dedicated CD transport mechanism. I was under the impression that only TEAC was still making them, but Rotel tells us that their latest and only machine, the RCD-1572 has one ‘purpose designed’ by another company, which implies that this is not a generic, made for PC, CD-ROM drive as found in many players today. The drawer itself is plastic, and thus a little insubstantial, but is ‘fit for purpose’ so long as you are nice to it. The other slightly unusual component choice is a Wolfson upsampling digital to analogue converter, chosen we’re told for sound rather than spec reasons. It’s still a 24/192 PCM device, however, presumably because they don’t make decent DAC chips with smaller numbers any more.

The output stage is where Rotel has the option to confer experience gained over almost as long a time as the CD format has been around. There was a time in the nineties when the brand made some of the most respectable disc spinners on the market. The various engineers involved with those products have long since retired, but the sound of this machine suggests that some of what they learned has been passed down even if the company itself has changed quite significantly. Slit foil capacitors are a good example of this.

The nice thing about this player is that it is just that, a CD player. It is not a DAC or a streamer, and (younger readers might want to cover their eyes at this point) it doesn’t have Bluetooth, so it’s not trying to be all things to all formats and can focus on the job in hand. I haven’t seen a CD player without digital inputs for some time. There is a digital output of the coaxial variety, which is useful if you have a decent DAC, but otherwise there are just analogue outputs on RCA and XLR. What’s more, the latter are connected directly to the differential outputs of the DAC, and so produce a genuinely balanced output.

Elsewhere on the back panel is a power inlet, an RS232 port for integration into multiroom systems, and 12V trigger connections – something that we Brits have never taken to, but which has a following across the pond. The RCD-1572 comes complete with a remote handset that includes useful buttons like ‘eject’ alongside rather diminutive control buttons; one suspects that its designers have better eyesight than the potential audience. There are also navigation buttons for the menu system, but don’t get too excited as there’s very little to change. In fact all you can do is dim the big blue power LED around the button, and the display, but these are separate and offer several levels each. The display is more informative than most, especially if you put a disc in that has metadata encoded on it, as artist, album, and track info are displayed. Build quality is about par for the money; I received the black version, but suspect the clear anodised silver option is more attractive as it shows off the aluminium front panel, and makes it easier to read the button legends. 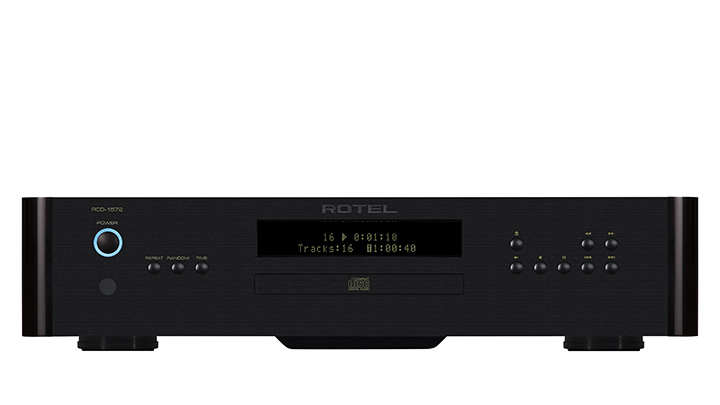 I have to admit that I don’t listen to CD critically very often these days, so there was a period of adjustment while I got reacquainted with the format. Streamers have a smoother, more relaxed sound, which makes CD sound a little hard and ‘digital’. Regardless, whether it was a matter of ‘burn-in’, ‘familarisation’, or even ‘reacquaintance’, after a while this Rotel started to produce a tactile sense of image with a good recording and has a slight emphasis on the upper midrange. Cymbals for instance are highlighted but avoid sounding thin and treble is well handled; it’s not as smooth as it can be but clean and open enough if the recording is good. This particular good recording was Blue Maqamsby Anouar Brahem [ECM] where the rich tonal variety and lovely reverb brings out the best in the acoustic instruments being played. The Rotel gives you the essentials with a good sense of timing and well focussed imaging; the combination delivers the musical message in clearcut fashion albeit with some of the polish that the recording contains being omitted.

With Herbie Hancock’s Gershwin’s World[Verve], the Rotel delivers a solid, dynamic version of events that treads the line between finesse and visceral very nicely. The piano can be a little hard-edged, but on the other hand you get a good vocal image when Joni Mitchell sings ‘The Man I Love’ and the snap of the snare drum is more vivid than usual. It’s not as smooth as a good Marantz (which would also spin SACDs), nor as compelling in terms of timing as a Rega, but has a balanced and musically coherent sound that encourages further listening.

In an attempt to see what could be done to improve matters I connected the power lead to a Puritan PSM136 mains conditioner, and this proved to be clearly beneficial. It relaxed the CD player’s sound just enough to take the edge off and let the groove slide in an effortless fashion. The top end was still a little glassy but the timing much improved. There was plenty of detail on Tom Waits ‘Underground’ [Swordfishtrombones, Island] and decent image width beyond the outsides of the speakers. Percussion is a clear strength on the Rotel and that was obvious with Victor Feldman’s remarkable playing on this album. The various instruments on the title track are nicely separated; you can easily separate the two bass lines for instance even if they could be more weighty. The voice projected well too and while the highs were a little exposed by the all seeing eye of the PMC Fact.8 speakers it’s fair to say that this CD player is unlikely to be partnered with such a revealing system in the world at large.

Connecting its coax output to an AURALiC VEGA G2 DAC (at several times the price) brought a considerably more subtle and richly detailed result, which shows that the drive is more than worthy of taking an upgrade in this department. Back with the onboard converter, Keith Jarrett’s solo piano improvisation ‘Part VII, London’ [Paris/London – Testament, ECM] had all the character of a hardwood instrument, which are not soft and gentle things when given a good thrapping. Not that Jarrett is pounding it, just being firm and rhythmically solid. The Rotel let’s you know as much in a slightly small-scale but entertaining fashion.

I contrasted this player with a streaming solution at about the same price, Chord’s Poly streamer and Mojo DAC combo (£900), which is an unlikely alternative, but the nearest thing pricewise that was to hand. This made the Rotel sound composed and relaxed with an even if slightly dry tonal balance and occasionally splashy highs. The Chord combo is more juicy and rich sounding, with a balance that probably suits the headphones that its minijack outputs are designed for. However it did make the CD player sound a bit more composed, which hadn’t struck me before. 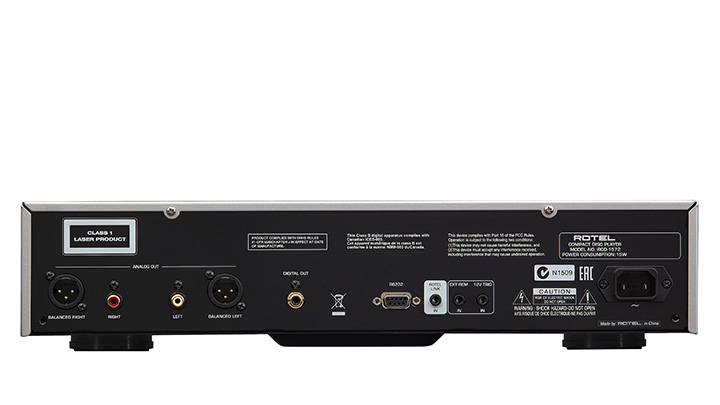 I guess the question that many CD users must be wrangling with is whether to buy another player or go over to the streaming alternative. The price of the latter is time in ripping a disc collection and getting your head and system around the new approach. There is an appealing simplicity about putting a disc in a drawer and pressing play, though you can apparently control the RCD-1572 with an app if you have the right Rotel amplifier but the straightforwardness of a remote handset is very comforting and never needs another update! This Rotel is a dedicated CD player in an age of do-it-all solutions; it’s a proper-sized and sensibly built machine that should provide years – if not decades – of musical enjoyment. Its reticent character lets the music do the talking and that’s the way it should always be.