John Challenger is the Assistant Director of Music at Salisbury Cathedral. You don’t get to do that job unless you are uniquely passionate about both the music and the sound it makes within that 800-year-old space. A large part of that passion is expressed through the cathedral’s remarkable 65-stop Victorian organ, built by Henry Willis (who earned the sobriquet ‘Father’ Willis through his immense contribution to the art and science of organ building). The organ has recently been dismantled for a full restoration, but not before John Challenger took the opportunity to cut a second CD, following the success of his 2015 Elgar From Salisbury[Regent]. This time, however, he’s chosen the music of a different country and produced the recording entirely under his own steam. 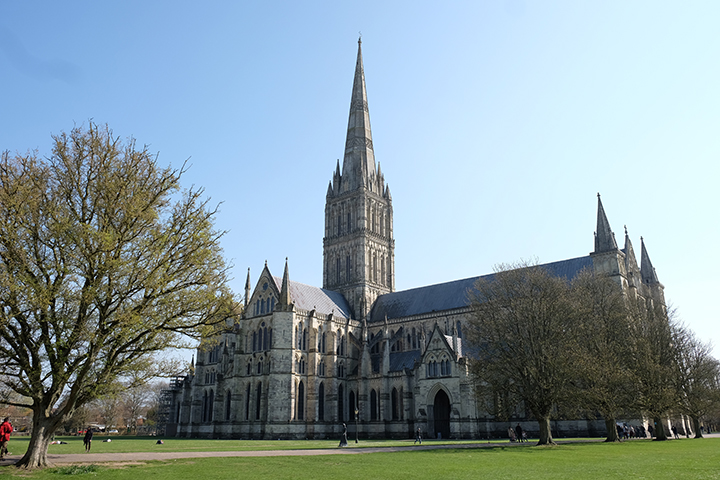 We caught up with John at the cathedral in the first weeks after the organ had been shipped north for restoration. We waited a few weeks so he could get over the loss…

AS: Please tell us a little about yourself.

JC:I was a chorister at Hereford Cathedral. It was a great period for instilling in me what I do today. I just love singing, but also the organ at Hereford is a beautiful ‘Father’ Willis from 1892, and I suppose I must have just absorbed that. The wonderful improvisation of the organist Dr. Roy Massey and the assistant director of music Peter Dyke, and just before I left Geraint Bowen took over in 2001, and he is still there. He did wonderful things – like Bach Passionsin Holy Week – which we take for granted now, but no-one was doing this in a cathedral at that time. My musical upbringing was hugely privileged in that regard.

I then went on to be an organ scholar at St. John’s College, Cambridge. I was there for four years, in fact, and fell in love with the sound that choir makes. I was hugely lucky to get this job from there and I’ve been at Salisbury since 2012. It’s something of a homecoming because I always wanted to work in a cathedral. I like working in a proper worshipping community (I run the chamber choir at the cathedral – which is our volunteer adult choir, and a spot of directing the Salisbury Music Society, the local chorus and a chance to conduct the local symphony orchestra) but mainly I play the organ and I love playing the wonderful ‘Father’ Willis organ… until last year of course, when it went away for restoration.

Tell us about the organ itself.

The organ was built by ‘Father’ Henry Willis built between 1876 and 1877. It’s divided into two cases above the north and south aisles of the choir. At the moment, these cases are looking rather sad as only the largest pipes remain because they are just too big to remove and don’t need a huge amount of work done to them. So, we’ve kept those, but if you can imagine when it’s restored, all the space of both cases – right back into the depths of the instrument – will be filled with just under 4,000 organ pipes. We have different layers – different families of pipes and different sections of the organ. It really is packed full.

Most of these pipes have now gone up to the workshop of Harrison & Harrison in Durham. Even the console has gone.

What are the pipes made from?

All sorts of things. There are some made out of wood. Most pipes are an alloy of tin and lead, and some other metals. In Victorian times, sheet zinc was often used for larger pipes. At one stage, there used to be an enormous amount of lead in this instrument because it was then pneumatically controlled; there were lots of little tubes with little jets of air controlling things on both sides of the instrument, but that’s all gone.

There was a big fuss about a blanket ban on lead being used near electrical wires a few years ago, which would have meant almost every organ in the country would have had to have been disposed of safely, but clearly that doesn’t apply to these instruments!

You have huge amounts of material going into the building of an organ. So many different types of metal, wood, leather, glue of different sorts, and of course now you’ve got electromagnets and wires… so many different things going on. It’s not really surprising that it takes a year to restore.

How is that year’s restoration spent?

Most of the year is spent in repair. The scaffolding went up in January. It took Harrison & Harrison a few weeks to dismantle the whole thing, but they are very efficient. It was lowered down in crates and taken away. The scaffolding then came down… and it became very miserable because we knew we had a year without the instrument.

Every pipe has to be cleaned. Every pipe has to be regulated to insure it is still working. And then they are all ‘put on the wind’ up in Durham and voiced up there. Then they are brought back down to Salisbury. We are having a little bit of a change in layout inside; not to change the sound, just to make it more accessible and safer. 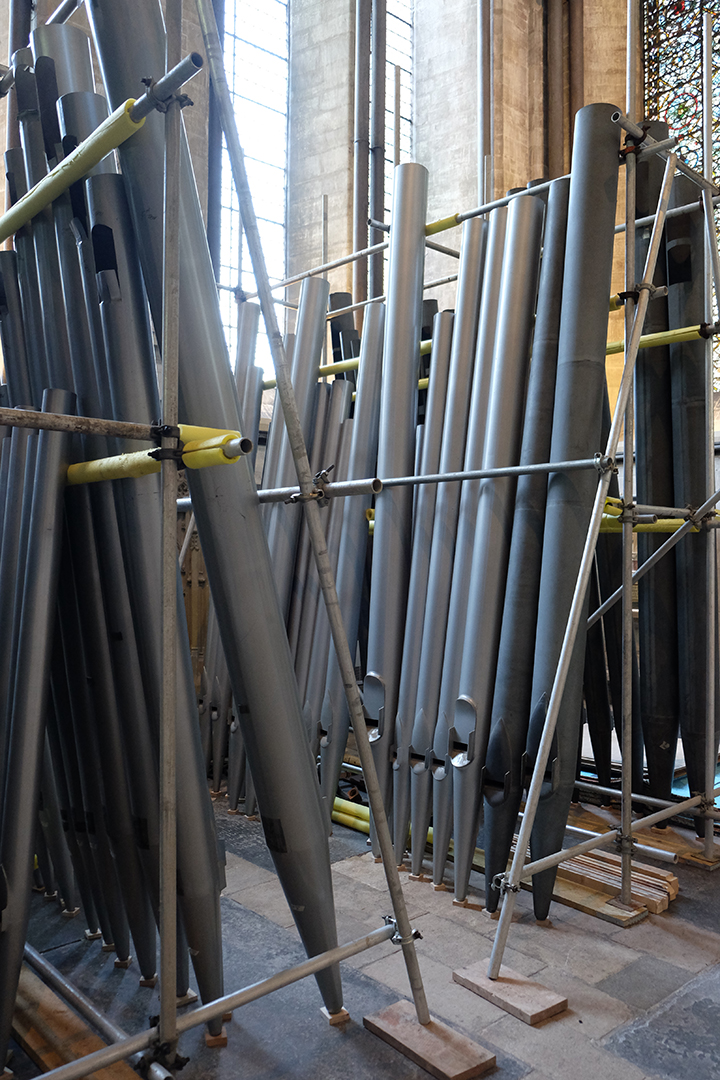 What’s next for the organ?

In September the scaffolding goes back up and everything goes back in, and that takes about six weeks. It’s not then playable until they have voiced it, which will be an extended period of not very nice noise while they regulate and voice every single pipe for the building to make sure it sounds how it did when it was taken out. In reality, we’re not really going to have the organ for several months after the scaffolding goes back up. But the day it’s back working I will want to be using it!

Yes. It’s a big year for Salisbury Cathedral next year because the foundation stone was laid in 1220. And we can’t celebrate 800 years of Salisbury Cathedral with a little chamber organ! We did a BBC Radio Three broadcast with that last week – playing a tiny chamber organ is somehow more terrifying than playing an organ of 65 stops because you feel more exposed. We also have an electronic organ, with a collection of loudspeakers in the triforium which is keeping the big liturgy going. It makes quite a sound, but it’s not the same! We also have a sampled Salisbury Cathedral organ in our exhibition that visitors can play on headphones.

How much will the restoration cost?

We need to spend £700,000 on the restoration because it’s a national treasure. It hasn’t changed in sound and it’s one of the finest Victorian organs in the country. We are not faced with the conundrum of “what do we change this time?” or anything like that. We’re not changing anything; we just knew we would leave it as it was.

How is that money raised?

The money is raised through private donation (go to bit.ly/2AN2DOX) and other fundraising means, we’ve had a few grants, but it’s an ongoing project, as there is still money to be found. It’s a big development project for us.

Moving over to the recording, tell us more!

This is my second solo recording. The Elgar (in 2015) was a bit of a voyage of discovery, but it came about because the Willis here just does transcriptions so well. I wouldn’t have put myself down as a transcription sort of person, but I am already contemplating doing another transcription disc when the organ is back.

This second CD, which will be released this summer, is a little different, as it’s French symphonic organ music. It’s all music by César Franck (1822-1890), who was himself an organist (the first organist of a then-newly built Cavaillé-Coll organ at Sainte-Clotilde in Paris). The beautiful nature of that organ coupled with Franck’s music influenced generations of French symphonic organ composers. I’m playing an English organ, but in many ways we’re talking the same philosophy; the organ has so many expressive sounds that I was just playing Franck’s music one day and thought, “This is so beautiful, and no-one has recorded this music on this organ yet, why not do it?”

Why do orchestral transcriptions work so well on this organ?

Organs like this that have more than one expression box allow you to be so creative. You can really orchestrate the music and it’s what makes these Victorian instruments so good. It was the height of the transcription period.

Is there any music that doesn’t sound wonderful on this organ?

Henry Willis was building instruments to deal with Romantic music and huge choral works. They could accompany Handel’s Messiah without an orchestra. He wasn’t thinking about scholarly explorations of Bach!

How does this recording differ from the last?

While all of that first album was music transcribed for the organ; this second CD is entirely made up of music composed for the organ. The flavour of this recording is so different from the first: I don’t think they could be more different, to be honest. I suppose in that regard the organ is so versatile; It frees you as a player because it sounds wonderful, and it makes lots of the decisions for you because the music just flows!