Our coverage of audio shows is now more commonly placed within the confines of the magazine itself, rather than published online. However, the short-form show report doesn’t fully represent some important aspects of audio that appear at the show itself. I’m not talking about the one-off monstrosities or the innovative new technologies that appear in the halls and listening rooms of the event. But instead, the subtle nuances that manifest when hundreds of audio companies appear side-by-side, often playing some of the same components in very different contexts.

So it was in two almost adjacent rooms at Munich High-End 2019: Constellation Audio and Magico. They had identically-sized rooms with a fundamentally similar layout, two rooms apart. Constellation Audio (in Room F-118) demonstrated the Continuum Audio Labs Obsidian turntable with Viper tonearm, the Pictor, Andromeda, and Taurus mono power amps all from Constellation’s Revelation Series, and a pair of the striking new Magico M2 floorstanders, all playing with Nordost Odin 2 cables. In Room F-116, Magico itself was showcasing the striking new M2, this time with an Aurender N10 streamer feeding MSB’s Select DAC, a full Kronos vinyl front-end, with Soulution Audio’s 500 Series preamp and mono power amps behind the rack, cables were by Kubala-Sosna. Equipment supports were by Critical Mass Systems in the Magico room, but the notes taken for the Constellation room read ‘snzybthth’: I should really re-up my shorthand skills.

Importantly, both companies were legitimately extremely happy with the sounds they were getting from their respective rooms. Perhaps even more importantly, those sounds were very different in absolute terms. 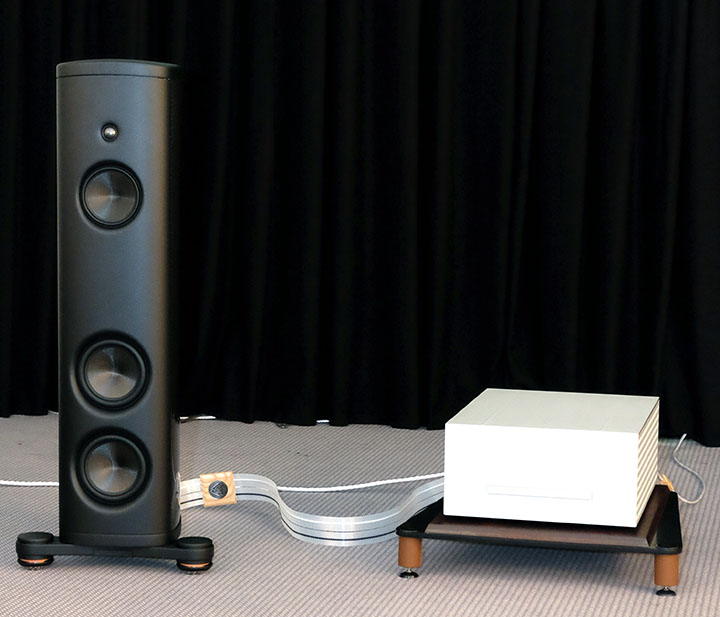 I found the Constellation Audio room to be musically insightful, effortlessly easy to sit in front of, capable of resolving extremely fine detail but in a way that doesn’t leave the listener cold, inherently dynamic, and most of all, fun to listen to. It was the kind of system that musically energises when called upon, but also extremely relaxing without being soporific. Walking in two rooms away, the Magico room was extraordinarily precise and focused. It was like you were laser-guided to the sound. The enjoyment you got from this system was a sense of being able to hear and process every last element in the recording, in terms of image depth, width, and height, dynamic freedom (or an understanding of where compression is used to the benefit and the detriment of music), and detail. To use a musical analogy to explain sonic performance, the two were like the difference between a first-rate operatic tenor and the world’s best crooner; both have voices that people would pay vast sums to hear, but one is ‘articulate’ and the other about ‘feel’. I don’t want to overstate these differences – it’s not as if the Magico room was ‘detailed, but boring’ or the Constellation room sounded ‘warm and woolly’. Both were extremely capable systems with a lot of overlap, but their directions were very different, and deliberately so.

Regardless of preference between the two rooms, this works extremely well for Magico. The myth of the ‘Magico sound’ is put to bed between those two rooms, as the M2’s footprint on the performance is more shaped by the electronics than it is by itself. If you want a neutral transducer, there is no better way of showing it than having two rooms almost side-by-side with the same loudspeakers in the same position and sounding very different. The differences were marked and substantial, meaning the speakers just got out of the way. ‘Character’ might be important in a man or a painting, but the Magico M2 played twice in Munich suggests we don’t necessarily want it leaking into our loudspeakers!

The naysayers will drive a bus through this argument, so let me hand them the keys to that bus in advance. The rooms were not level matched. The musical choices were different in the two rooms. There was significant noise pollution both from people talking, foot traffic, and from adjacent rooms. The performance of these rooms leaves a lot to be desired. And, of course, both companies took slightly different – but similarly minimal – approaches to room treatment. To use an inevitable motoring analogy, it’s like testing a Ferrari on the Stelvio Pass in Italy and a Lamborghini on the Col de Vence in France and trying to come to a conclusion about which car is better. But here’s the thing… car drivers do just that and make decisions about some very expensive bits of metal based on such uncorroborated anecdotal findings. How dare they!

Audio is at a point where almost everything is competent and good. There were very few rooms in Munich that made you question the hearing (or the sanity) of the designer. However, with that, there is an uncalled for ‘mediocrity of the competent’ that is leaking into the high-end world. If the entry level is getting better (and it is), the high-end needs to raise its game. A handful did just that (and two of them are the subject of this blog), but the rest didn’t give us ‘better’… they just gave us ‘more’.