We spoke to Kazutoshi Yamada – President of Zanden Audio Systems – during a recent brief tour of Europe.

Unlike many manufacturers and designers in the audio business, Yamada-san didn’t take the usual route of learning at the feet of the master. He didn’t spend years as an apprentice engineer or junior designer in a large R&D team. Instead, he took the more hardcore enthusiast approach of going it alone with a dream… and an innovative circuit design that he developed while at university.

AS: Yamada-San, when did you start Zanden?

KY:About 25 years ago, I settled on the Zanden name. My family name Yamada uses a Chinese pictogram that can also be read as ‘Zanden’; ‘Zan’ meaning ‘mountain’ and ‘Den’ meaning ‘rice field.’ However, I didn’t realise the name existed (and means ‘sand’ in English) in the Netherlands until a few years later, when people kept asking me “Is Zanden Dutch?”

AS: How did you get into audio electronics?

KY:While studying at the university (my major was in electronics), I invented a circuit for use in a phono stage and after graduating I started my own private office. This was a valve circuit; I am 66 years old, I am a part of the valve generation, and I started designing valve amplifiers more than 40 years ago.

Ten years after starting my own office, I invented some tube circuits that were patented in Japan. These form the base circuits of Zanden products and I still use them today. This special circuit went into the original Model 9500 mono amplifier, and later the Model 9600. As well as into the Model 8120 power amplifier from the Modern range… everything! Also, I don’t like to use traditional valve circuits, so with designs like the line and phono stages I use a circuit that is unique and I don’t think any other manufacturers adopt my circuit.

AS: And what is so unique about that circuit?

KY:Most other valve amplifiers only use a combination of resistors and capacitors, and that’s all in the basic circuit. My circuit includes more regulation through a current regulated diode. I use this device and it is very popular in the industry!

AS: And you invented that?

KY:Maybe! I prefer to use the fixed-bias circuit because the sound is very stable. While many tube electronics manufacturers also use a traditional fixed-bias circuit, my circuit is very simple and unique. I use a battery that performs the biasing of the circuit. We have batteries used on PCBs that work for more than 10 years with minimal voltage loss. The combination of a current regulated diode and fixed-bias works very well together for lower noise floor.

AS: Although you have an electronics degree, you did not work for other audio brands before starting Zanden. What are your audio qualifications?

KY:I have over 30 years of experience as a live music coordinator, which means I have attended more than 500 concerts. This is my basic experience for music and means I can compare live and recorded easily as result. I studied electronics to find the difference between live and recorded and how we close the gap. This is what interested me in LP reproduction: when I play back Decca, EMI, and Columbia mono LPs, the tonal balances are totally different. I thought it must be due to different EQ cards. I started research in mono LP as a result, and then made two mono equalisers and did the same for stereo playback!

AS: What were Zanden’s first products?

KY:The first product we made was the Model 9400 power amplifier and the Model 1000 preamplifier, which still form the basis of the Model 9600 MkII and Model 3000 MkII today. 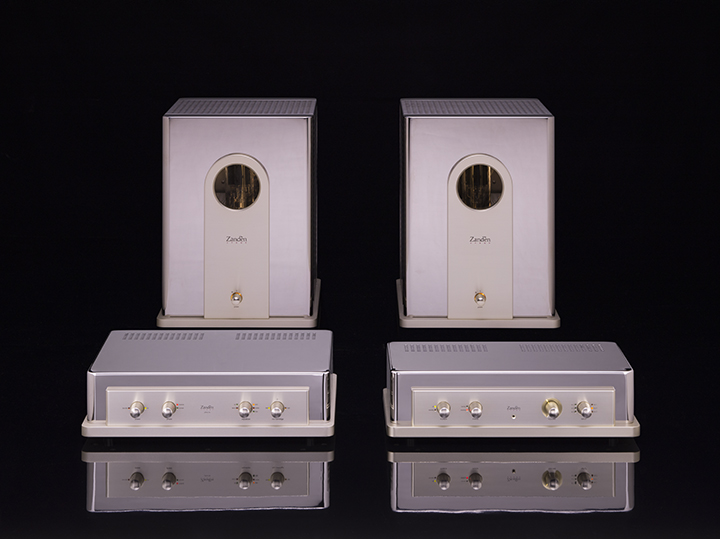 AS: What prompted the changes to these models?

KY:Well, I had a very special product made for Hong Kong – cost no object – which meant I could build the ideal product, using every part I ever dreamed of. When I received such an offer, I decided to make the product, and I thought I can use the technology from that for the next “normal” Zanden products. And that’s precisely what happened.

AS: Are there bigger power amplifiers on the way?

KY:My interest is in high-power amplifiers and almost seven or eight years ago I found some very good valves from Russia – the KT120 – and I was eager to build a push-pull design, and of course, I am still interested in direct-filament tubes (845, 211, 300B) because I think the tonality is better. I sometimes receive requests from distributors to make bigger products (such as for the Hong Kong market), so this was the reason I develop new designs.

Now I am considering building push-pull designs, because they are theoretically better than single-ended designs. However, many tube lovers still prefer single-ended amplifiers. This was the reason I invented the new generation of amplifiers. I have put these ideas into the special models for Hong Kong, but actually starting with the Chuko line stage and Jinpu phono stage. In the future, I would like to develop the next generation of Zanden products based on those designs. I do hope to design and deliver the top models into the Classic selection, above the existing models.

AS: What do you think audio companies get wrong?

KY:With my products the most important thing in building the amplifier is the direction. My amplifiers use PCBs; many tube designers still prefer point-to-point wiring, but it becomes impossible to fully control the physical directionality of the wire in that kind of a circuit. In my opinion, very few manufacturers take time to judge the right directionality of components such as resistors. We judge them because if the components are even slightly different, the bokeh of the sound changes subtly (Editor’s note: bokeh is a Japanese term used in art to describe the character of out-of-focus background images).

AS: You also made a range of digital audio electronics. Why did you stop?

KY:I concentrated on the 16-bit audio, because I think it sounds more musical than bitstream. However, it is almost impossible to find those 16-bit DAC chipsets anymore and I am still interested in the multibit conversion. While they are very good, I wouldn’t be happy replacing multibit with an AK or ESS converter. But that doesn’t mean I won’t be launching any more digital products!

AS: If you don’t like bitstream DACs how will you launch new digital audio?

KY:I am interested in building a discrete R2R DAC. Right now, we are resourcing parts for this, such as resistors, logic ICs, and so on. The most difficult part in building such a DAC is finding very precise resistors, 0.0005% tolerance for example. However, I have found a source, but it’s not going to be cheap. Nevertheless, it is very important for us to make and design both a USB and a Network converter.

AS: What about DSD and MQA? How can you make them work with a R2R DAC.

KY:DSD will be… difficult! Multibit technology does not lend itself to DSD’s high-frequency bitstream. It’s not impossible, but it is difficult. Zanden is a very small company, I am not sure I can obtain an MQA license until the next generation of digital products are on the market. After they have been released, however, it should not be difficult for me to release MQA onto that digital platform.

AS: How is the digital platform influencing other parts of Zanden Audio Systems?

KY:Quite a lot! My factory was in central Osaka, but this is a crowded, very noisy area, and there is a lot of radio frequency noise. It was hard for me to find a space quiet enough to develop and test our products. If I was to try to develop such a high-resolution DAC, we needed a lower noise floor than central Osaka area could provide. For this reason, we moved the factory to Southern Osaka in May! It is very small, but I can make excellent grounding there and that is vital for good measurements and listening during the DAC development.

AS: What do you listen to at home?

KY:My turntable is a Kuzma XL DC, with a ZYX 4D cartridge, and I use a pair of Magico Q1 loudspeakers. I am not sure if this is a secret or not, but Alon Wolf of Magico offered a trade (the Q1 for a 1200 phono stage, which he uses in the studio). Sometimes I also use a pair of Wilson Sasha; I have a very good dealer near my factory. Also, I have a vintage pair of Hartley Concertmaster VI loudspeakers. When I visited Hong Kong to present the special model of a very large single-ended monoblock amplifier, my distributor had Hartley Reference Monitors. I was very shocked after hearing them! Such a wonderful sound! So, I returned to Japan and searched in second hand shops until I eventually picked up a very good vintage pair for myself.